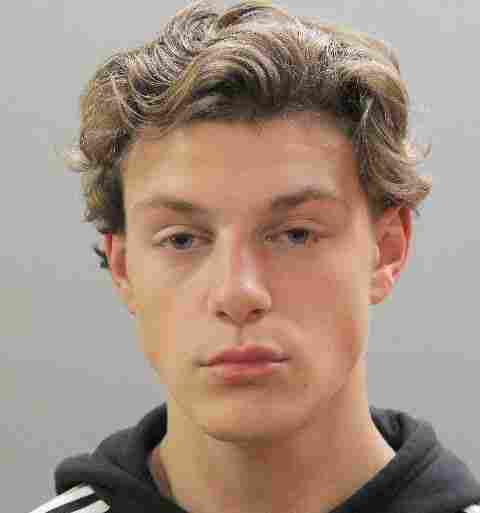 Tyler Flach, 18, is accused of fatally stabbing Khaseen Morris in a brawl stemming from a dispute over a girl. Dozens of students looked on as Morris bled out, even filming the violent scene and posting it to social media. Nassau County Police Department hide caption

An 18-year-old has been arrested and charged in the stabbing death this week in New York of Khaseen Morris, who died surrounded by a crowd of students taking cellphone video of the attack as he bled out on the ground.

Tyler Flach was charged with second-degree murder and was arraigned in court on Thursday, according to Nassau County police. He pleaded not guilty to killing Morris, a 16-year-old senior at Oceanside High School, during an after-school fight that broke out over a girl. Morris later died in a hospital.

As Morris lay in the parking lot of a strip mall pizzeria in Oceanside, N.Y. — hemorrhaging blood from a stab wound in the chest — police estimate somewhere between 50 and 70 kids stood by and failed to call for help. Many filmed the violent scene, uploading videos to social media sites.

"Kids stood here and didn't help Khaseen. They'd rather video this event," Detective Lt. Stephen Fitzpatrick told reporters at a news conference Tuesday. "They videoed his death instead of helping. So anyone who has video, come forward, [and] do the right thing for Khaseen."

Looking perplexed and exasperated, Fitzpatrick added, "I don't know what to make of it, my generation vs. this generation. This can't go on. Your friends are dying while you stand there and video it. That's egregious."

According to Fitzpatrick, a group of six to seven male suspects seized on Morris and his friends in the attack. A second boy, 17, suffered a broken arm and swelling to his head.

Early stages of the investigation have revealed that Morris knew he might be a target at the pizza shop and likely anticipated a "fistfight" stemming from a dispute over whom a local girl might be dating. Fitzpatrick said Morris had received threats over social media "that [Flach] was going to do this to him" and Morris showed up anyway.

It is unclear who eventually called the authorities.

Police are reviewing videos in an attempt to identify possible suspects.

"I don't think anybody here is naive to who is involved in this incident. I think all the players are known to each other," Fitzpatrick said.

Several students have come forward to identify some of the people involved.

Oceanside Superintendent of Schools Phyllis Harrington delivered a message to the community via YouTube.

"The last thing a superintendent wants is to receive a 1:40 a.m. phone call that a student has passed away from a senseless act of violence," Harrington said, offering condolences to Morris' family.

She touched on the use of social media and pleaded with students and parents to contact police whenever they encounter something "potentially serious" online.

Addressing parents, Harrington said, "I ask that in addition to using judgment and restraint on social media, that you have this conversation with your children and that you monitor their social media usage."

Flach is being held without bail.