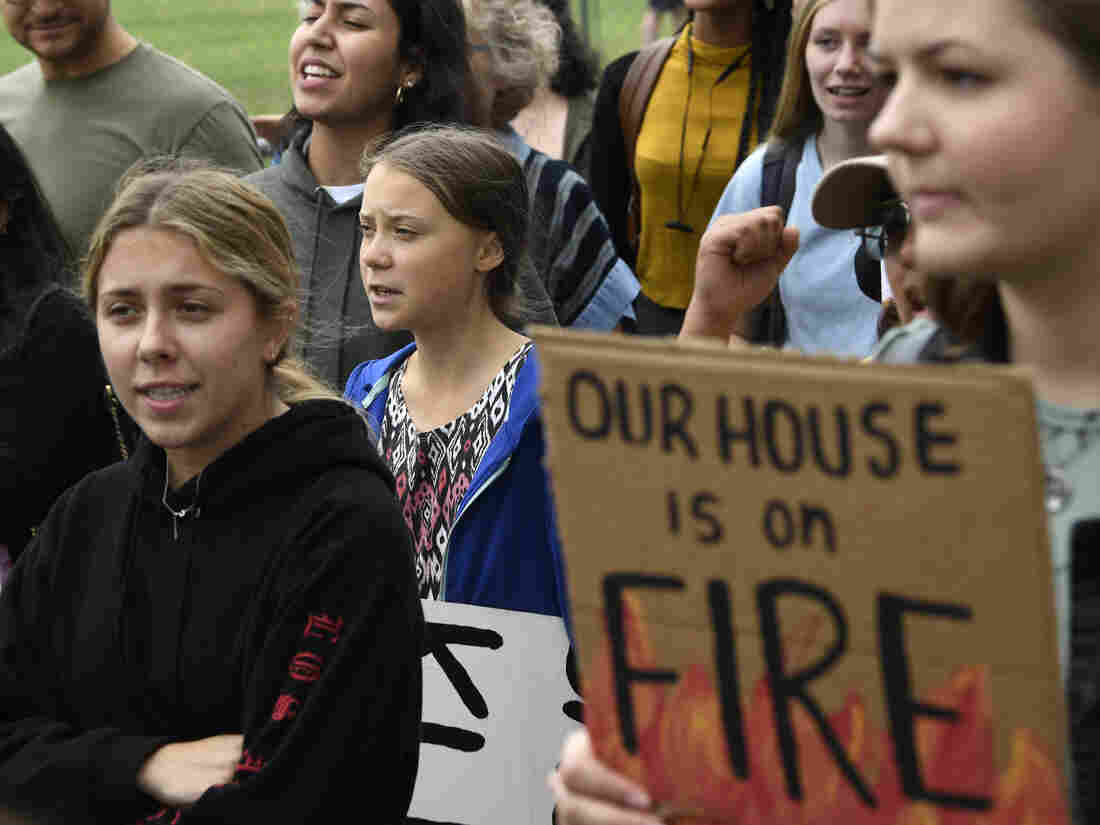 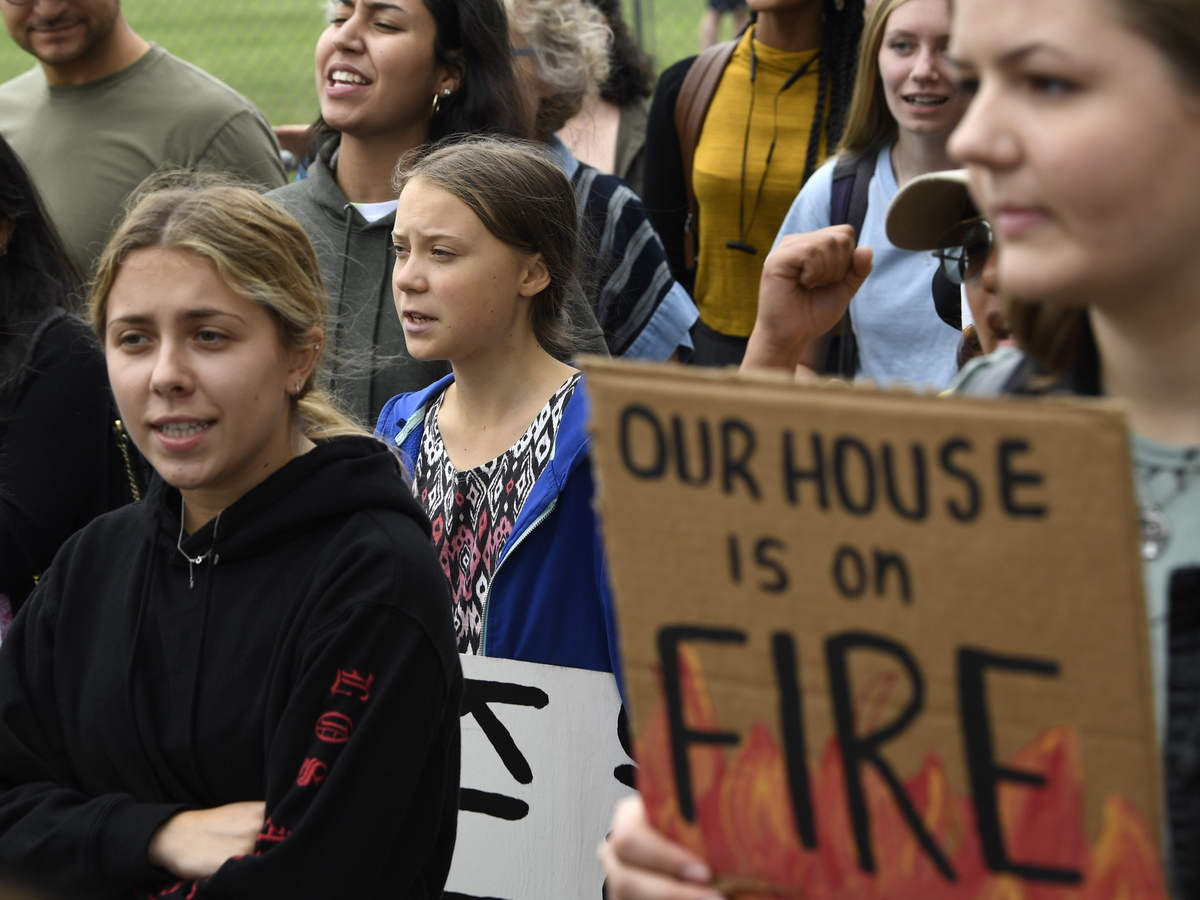 Spurred by what they see as a sluggish, ineffectual response to the existential threat of global warming, student activists from around the world are skipping school Friday, for what organizers call a Global Climate Strike.

The young activists are protesting as the U.N. prepares to hold its Climate Action Summit on Monday in New York City.

The strike's figurehead is 16-year-old Swedish activist Greta Thunberg, who traveled from Sweden to New York on an emissions-free sailboat. A little over a year ago, Thunberg began her school strike for the climate by herself, outside the Swedish Parliament.

Support for a school climate strike has since spread across the globe. In the past year, Thunberg has been nominated for the Nobel Peace Prize by Norwegian lawmakers. She's also met with Pope Francis and lawmakers in several countries.

"We are currently on track for a world that could displace billions of people from their homes," Thunberg warned this week as she accepted Amnesty International's Ambassador of Conscience Award. She ended her acceptance speech with a call to action: "See you on the streets!"

In New York City, thousands of students are expected to fill the streets alongside Thunberg because, as the city's school district announced on Twitter, it is giving strikers excused absences. In Oregon, Portland Public Schools is doing the same.

Strikes also are planned in rural areas where just a few dozen protesters are expected. Nicholas DuVernay, 17, organized a protest in his politically conservative small town of La Grande, Ore.

"Since, probably, the beginning of my junior year in high school I've been interested in climate science and pretty passionate about environmental topics," says DuVernay, who plans to study climate science when he attends college next year.

A Washington Post-Kaiser Family Foundation poll this week shows a majority of teenagers believe human-caused climate change will cause harm to them. And a quarter of the poll respondents said they have participated in a school walk-out, a rally or contacted a government official on the issue.

There have been similar student events in the past year. But this time, students are asking adults to join them.

At the University of Nevada, Reno, Stallar Lufrano-Jardine, 36, is setting up an event on the campus where she's an employee and student.

"I'm bothered by the lack of movement to make meaningful advances to solve the climate crisis," says Lufrano-Jardine.

But it's clear younger people are leading this movement. And they say most adults — especially policy-makers — are moving far too slowly.

Strike organizers have a list of demands that includes "respect of indigenous land, sustainable agriculture, protecting biodiversity, environmental justice and a just transition away from fossil fuels and towards renewable energy," said 17-year-old Baltimore resident and organizer Nadia Nazar.

Many of those demands are part of the Green New Deal, which was crafted by progressive Democratic lawmakers but so far hasn't gone anywhere in Congress.

At a Capitol Hill press event this week, Nazar said she hopes the proposal defines her generation. "I am not a part of Generation Z. I am a part of Gen GND — the generation of the Green New Deal," she said as supporters cheered.

Also on Capitol Hill this week, Thunberg and other activists testified before lawmakers. Louisiana Republican Rep. Garret Graves told them that climate change has exacerbated the loss of his state's coastline.

But his idea of what that means is very different than the activists' vision.

For instance, Graves agrees with President Trump on the need to withdraw the U.S. from the Paris climate agreement. Graves told the student organizers the pact allows China to continue emitting more carbon dioxide while the U.S. cuts emissions. "Paris and its related pledges would undermine U.S. competitiveness," his spokesman said.

Graves got immediate pushback from the young activists, including 17-year-old Jamie Margolin from Seattle, who asked how Graves will respond to questions from his children and grandchildren about whether he did enough to address climate change.

"Can you really look them in the eye and say, 'No, sorry, I couldn't do anything because that country over there didn't do anything, so if they're not going to do it then I'm not.' That is shameful and that is cowardly," Margolin said.

Organizers are saying this climate strike will be the largest yet. More than 2,000 scientists around the world have pledged to join. Some companies also have signed on, including Patagonia and Seventh Generation.