Accessibility links
Review: 'Heaven, My Home,' By Attica Locke Attica Locke returns to the world of Highway 59 in Heaven, My Home, which finds Texas Ranger Darren Mathews dealing with the disappearance of the young son of an imprisoned white supremacist leader.

'Heaven, My Home' Is A Complicated Place

'Heaven, My Home' Is A Complicated Place 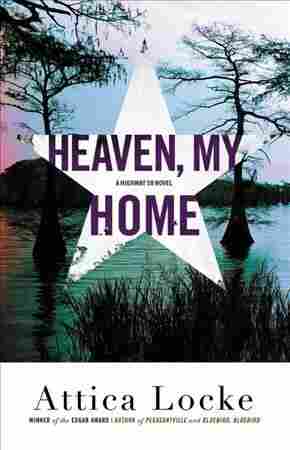 If you thought Texas was a whole 'nother country, welcome to Lake Caddo, a sprawling, irregular inland sea divided between Texas and Louisiana. Surrounded by jungle-like foliage (that's right; East Texas is a different ecosphere from the rest of the state) and rife with wildlife, Lake Caddo has long been home to people looking to "hide in plain sight," as one character in Attica Locke's new Highway 59 novel, Heaven, My Home remarks.

Those people, at any given time, might include indigenous Americans, freed slaves, brigands, riverboat passengers, and, sadly, members of Locke's fictional and all-too-recognizable Aryan Brotherhood of Texas (ABT), the white supremacist group whose leader Bill King wound up behind bars in 2018 Bluebird, Bluebird. The Texas Ranger who put him there, Darren Mathews, returns in this book for several reasons. It's a testament to Locke's skill as a novelist that, while a mystery plays out, she's able to keep all of Ranger Mathews's other life travails relevant.

On the Texan side of Lake Caddo, nine-year-old Levi King, Bill's son, has disappeared. Readers see Levi attempting to navigate the eerie lake at twilight, then learn that no one has seen him since. His mother Marnie and teenaged sister Dana are frantic, while Marnie's slithery ABT-hanger-on boyfriend Gil quickly tries to pin the blame on a quiet older African American gentleman named Leroy Page. Page is one of the last denizens of the ironically named Hopetown, a small settlement on the lake that sheltered generations of freed slaves and their families.

Author Attica Locke: In America, We Walk 'Side By Side' With Our Past

Page and other Hopetown community members have strong ties to a tiny group of Hasinai Caddo Indians who claim to the be only descendants of Texan Caddos who did not take land grants in Oklahoma. Scenes with the Hasinai family matriarch Margaret Goodfellow and her daughters are some of the most memorable in the novel, not only because they are filled with rich detail (and a fabulous description of Indian fry bread), but because Mathews has to contend with a group even more disenfranchised than his own.

Mathews has his perspective challenged by many characters in Heaven, My Home, from his fecklessly cruel mother Bell to his ambivalent wife Lisa and even the incarcerated Bill King. As usual, he and his fellow Texas Rangers clash with local law-enforcement representatives. However, in this book, the sheriffs and even the ABT members at times seem more bumbling than dangerous. The true evil lies in a more sophisticated direction, with the self-styled social doyenne of Jefferson, Texas and her grasping real-estate developer pal.

It's not that Locke goes easy on racists or bigots or ignorant types; it's that she wants to demonstrate how their idiocy can mask deeper erosion of a part of the world she clearly loves. Deep East Texas and its Highway 59 include some of the few places in the United States where free black societies took hold and flourished. Mathews, raised by his two loving but also sometimes warring paternal uncles, inherited from them a belief in the power of higher education. But having left the University of Chicago law school after two years, Ranger Mathews now realizes that academic and career privilege can sometimes blind people as surely as ignorance and deprivation do.

Readers can rejoice that there are has plenty of volumes possible in the future of a mystery series with atmosphere, depth, and boundless compassion for its characters.

As Attica Locke continues her series, the question is how Mathews plans to use his talent and education. He knows that the path Lisa (and their friend Greg, about whom you will hear more in the novel) has taken as a partner in a high-powered Houston law firm is not for him. But he's also not yet ready to become a small fish in a pond of any size. At one point, Mathews reminds us how Texas Rangers originated: "I'll tell you something about this badge. ... The Rangers were used by landowners and government officials to clear out Indians from so-called white land."

Darren Mathews knows this. He has always known it. But what will he do with this knowledge? Locke has saddled Mathews with enough conflicts that it's impossible to predict which will progress where. The world of Highway 59 contains multitudes, rich and poor and booksmart and horse-sense smart and of many races and ethnicities. Readers can rejoice that there are has plenty of volumes possible in the future of a mystery series with atmosphere, depth, and boundless compassion for its characters. Attica Locke combines first-class procedural action with wise contemplation on our country's modern divides. Heaven, My Home should be on any mystery lover's TBR pile this fall.