Accessibility links
Review: 'Night Boat To Tangier,' By Kevin Barry In Kevin Barry's grim but compassionate new novel, two weary Irish ex-crooks sit waiting in a run-down Spanish ferry terminal, waiting for one man's estranged daughter who may or may not show up. 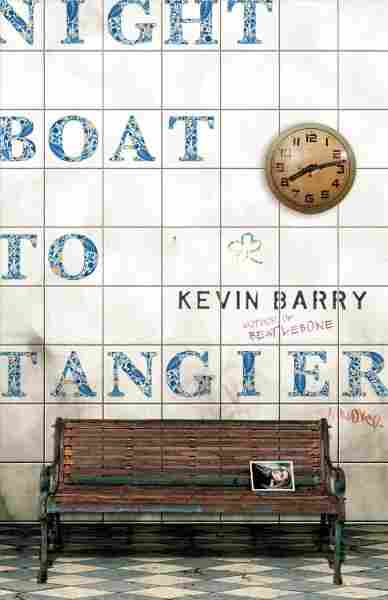 The Spanish port city of Algeciras boasts a long and rich history, and is home to some of the country's most beautiful parks, plazas and churches. But Maurice Hearne and Charlie Redmond, the two aging Irish men at the heart of Kevin Barry's Night Boat to Tangier, aren't interested in any of that. They're spending all their time in the city's dingy ferry terminal, along with a mass of weary travelers and a handful of bored employees.

It's not the kind of place you'd likely choose to while away the hours. "Oh, and this is as awful a place as you could muster — you'd want the eyes sideways in your head," Barry writes. "It reeks of tired bodies, and dread." The Alhambra it's not, but it's a fitting setting for Barry's dark, haunting novel.

The opening pages of the book find Maurice and Charlie, both in their 50s and worse for wear, sitting on a bench in the Algeciras ferry station: "Two Irishmen sombre in the dank light of the terminal make gestures of long-sufferance and woe — they are born to such gestures, and offer them easily." The two men are there looking for Maurice's estranged daughter, Dilly; a 23-year-old "dreadlock Rastafari." They've heard the young woman, who runs with a crowd of similarly-maned hippies, is due at the station, either leaving for Tangier or returning from there.

Barry's a remarkable sentence-level writer who's capable of extraordinary turns of phrase.

Maurice and Charlie accost a young man who they think might know Dilly, casually terrorizing him in search of information on the woman's whereabouts. They strike up a conversation with two other women whose English skills aren't quite developed. And they drown their sorrows at the station's bar: "It is a tremendously Hibernian dilemma — a broken family, lost love, all the melancholy rest of it — and a Hibernian easement for it is suggested ... we'll go for an old drink."

The chapters that take place in the station are interspersed with flashbacks to their younger years, when they were alternately friends and rivals. The two men were both drug traffickers, a business that's dried up on them: "But the money no longer is in dope. The money now is in people. The Mediterranean is a sea of slaves. The years have turned and left Maurice and Charlie behind. The men are elegiacal, woeful, heavy in the bones. Also they are broke and grieving."

Much of the flashbacks focus on Maurice's stormy relationship with Dilly's late mother, Cynthia. The two were haunted by paranoia and Maurice's ill-advised plan to launder money in a real estate development; after the couple broke up, Maurice lit out for Spain, "a country vast and made for hiding."

It's tough to turn a story that's essentially just two people waiting for someone into a gripping narrative, but Barry manages to do just that. (Of course he's not the first Irish writer to do so; Night Boat to Tangier calls to mind Samuel Beckett's Waiting for Godot.) Barry has a knack for dialogue that keeps the book moving; the running conversation between Maurice and Charlie is dark and often very funny.

As was evident in his previous novels, Beatlebone and City of Bohane, Barry's a remarkable sentence-level writer who's capable of extraordinary turns of phrase. Describing Maurice and Cynthia's sojourn to the Maam Valley in western Ireland, Barry writes, "The days were cold as evil but the evenings spread magic from the sea inwards and stretched out and tapped the place until it was open to our dreaming." And here he is reflecting on Dilly's decision to leave home after the death of her mother: "She wanted a place that did not know the meaning of her grief. She wanted to travel to the far recesses of herself and see what she might find back there."

Novels that deal with subject matter as dark as this one run the risk of becoming suffocating, or collapsing under the weight of their gloom. But Barry avoids this trap by painting all of the characters as fully human.

Novels that deal with subject matter as dark as this one run the risk of becoming suffocating, or collapsing under the weight of their gloom. But Barry avoids this trap by painting all of the characters as fully human — Maurice and Charlie behave monstrously, but the reader still feels for them. "You see, it's my daughter that's missing, fella," Maurice tells someone at one point. "Imagine, after three years, how you'd do anything to be free of this feeling. Because my heart? It's outside of its ... box and running loose in the world."

Night Boat to Tangier is remarkable, a novel that's both grim and compassionate, and it features gorgeous writing on every page. Barry never asks the reader to pity his characters; rather, he makes it nearly impossible not to relate to them, which is a remarkable trick. It's not a novel that tries to teach lessons, except for maybe one: "Hate is not the answer to love; death is the answer."