Accessibility links
Young People Lead Millions To Protest Global Inaction On Climate Change "We know it's happening. We need change. We demand better," an 11-year-old girl said at a march in Thailand. Protesters are calling for net-zero carbon emissions and other changes. 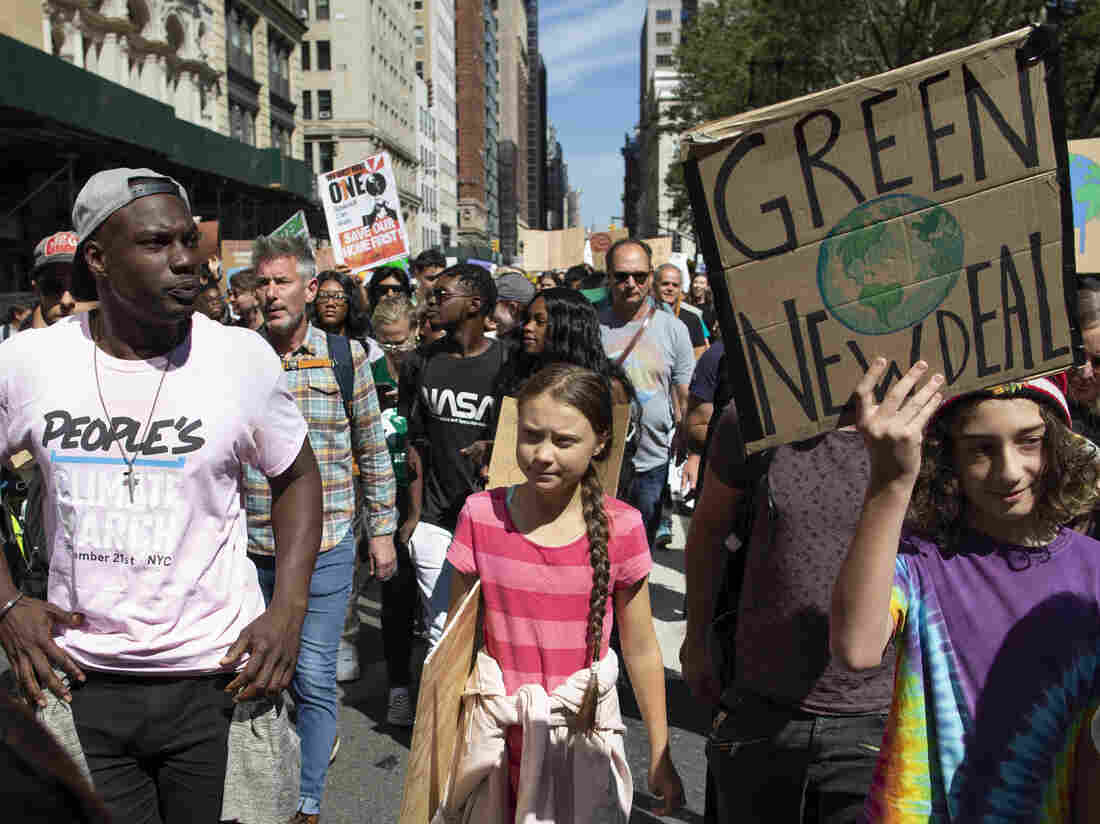 Greta Thunberg, the 16-year-old leader of a global protest against inaction on climate change, marched at a rally in New York City Friday. Around the world, millions of other people joined her. Eduardo Munoz Alvarez/AP hide caption 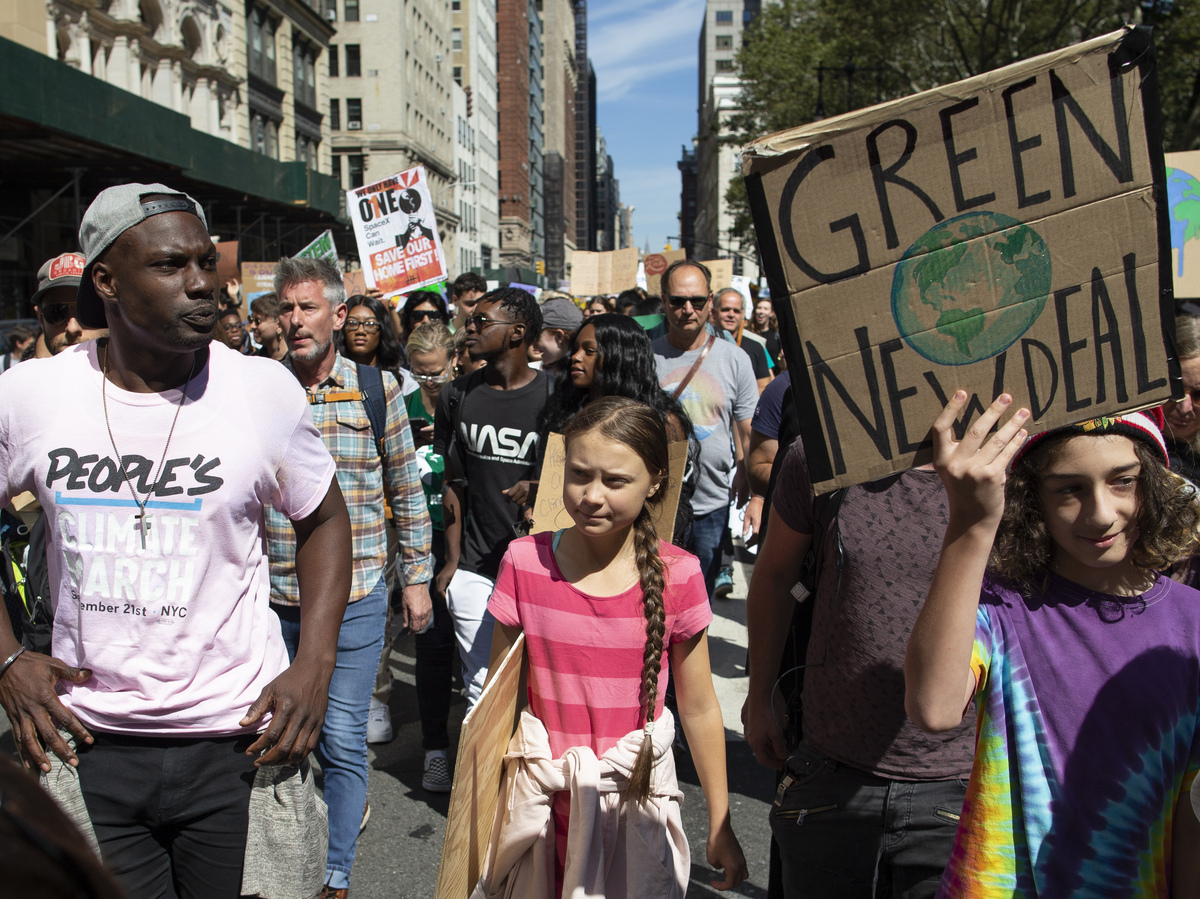 Greta Thunberg, the 16-year-old leader of a global protest against inaction on climate change, marched at a rally in New York City Friday. Around the world, millions of other people joined her.

Millions of young people raised their voices at protests around the world Friday in a massive display meant to demand urgent action on climate change. Scores of students missed school to take part, some joined by teachers and parents.

Some of the first rallies began in Australia, and then spread from Pacific islands to India and Turkey and across Europe, as students kicked off what organizers were calling a Global Climate Strike.

In the U.S., where more than 800 marches were planned, thousands of young people are absent from classrooms so they can carry signs, march and shout slogans calling for a new approach to energy and emissions.

"I'd rather go protest about the Earth and how something's going wrong than sit in my classroom and act like nothing's happening," high school student Harshita Ray tells member station WOSU in Columbus, Ohio.

Instead of being at Olentangy Liberty High School, Ray joined other students for a demonstration at the Ohio Statehouse, filling the steps in front of the building and spilling out over its plaza. 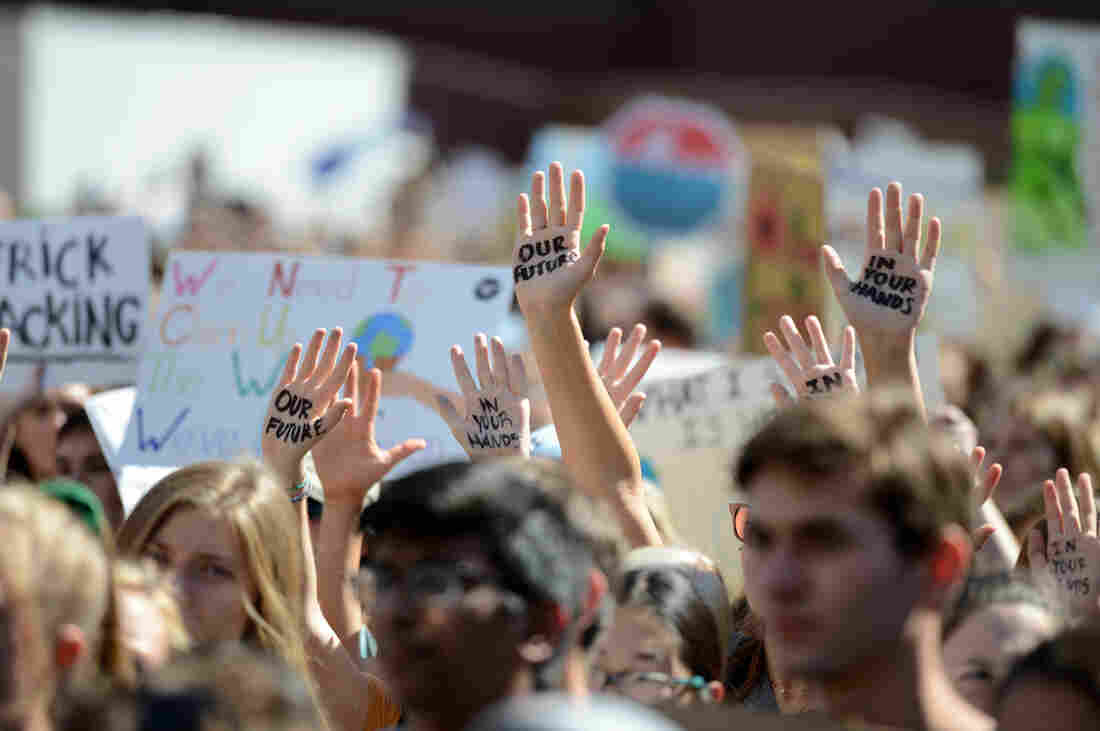 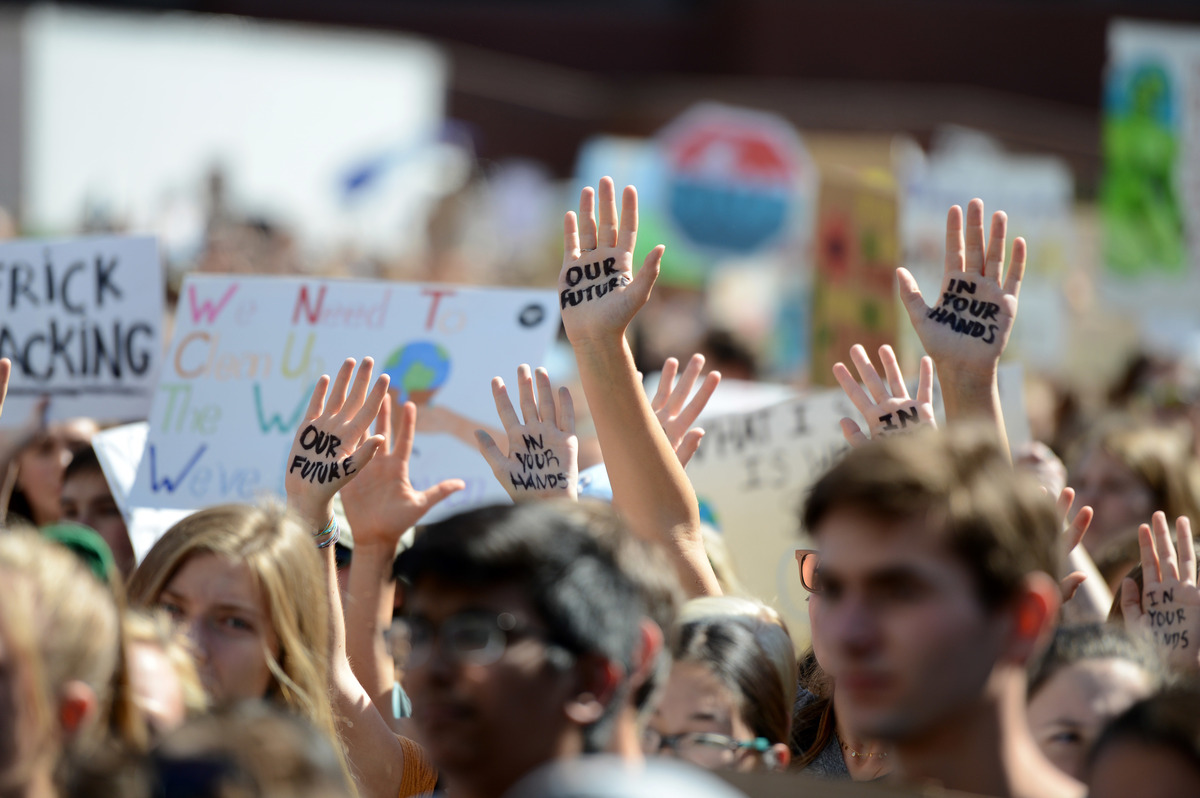 Thousands of students gathered and marched in Boston.

Greta Thunberg, the 16-year-old Swedish activist who sparked what has become a global movement of Friday school strikes over climate change, is attending a large rally and march in Lower Manhattan.

At a rally in San Francisco, Makayla Neyon, 16, told member station KQED: "I really just hope that we bring attention to the fact that our freakin' Earth is endangered ... so that my generation and my future generation can have a planet to live on."

New York City is looking huge! Lower Manhattan is absolutely packed with people. It will take ages for everyone to get to Battery Park.#ClimateStrike #FridaysForFuture pic.twitter.com/InoX8kQmCa

The protesters are marching to demand that government and businesses commit to a goal of net-zero carbon emissions by 2030. On its website, Global Climate Strike calls for a swift transition from fossil fuels to renewable energy.

Thunberg has been in the U.S. for more than a week, urging leaders to take responsibility for the environment and building momentum toward Friday's demonstrations. She recently told NPR that even with the new support, her focus remains on changing the future — for the better. 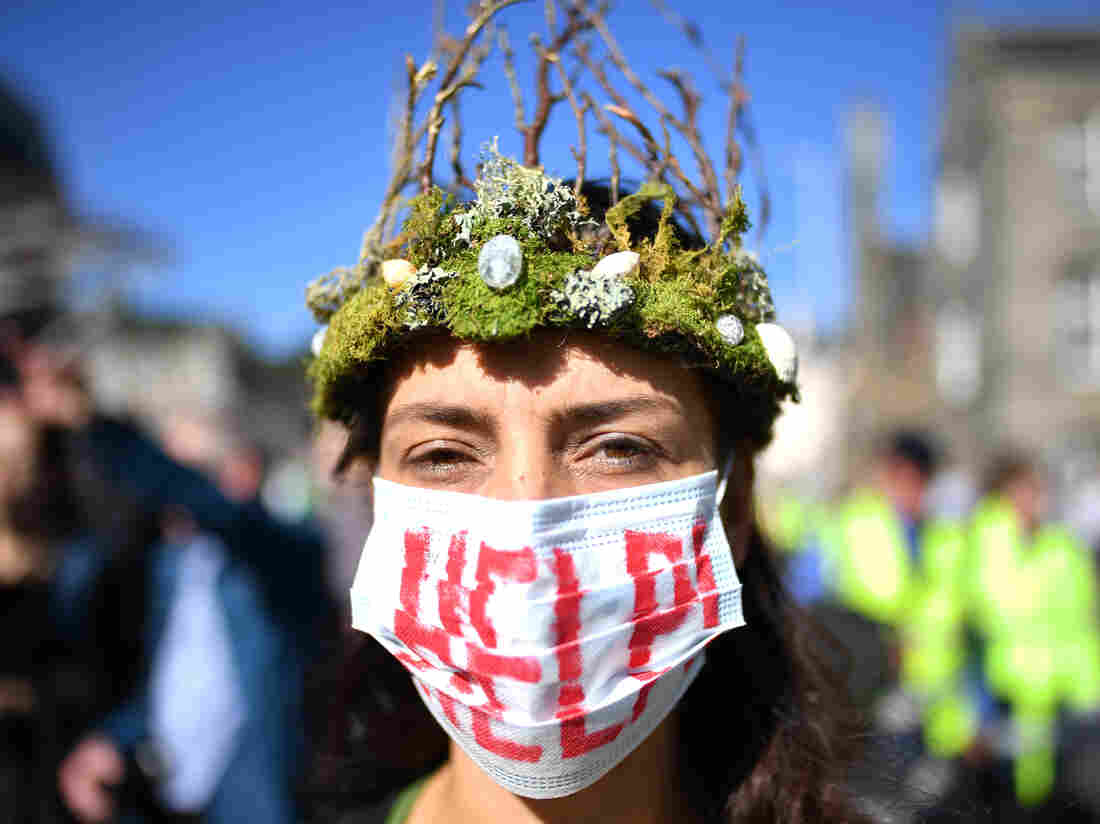 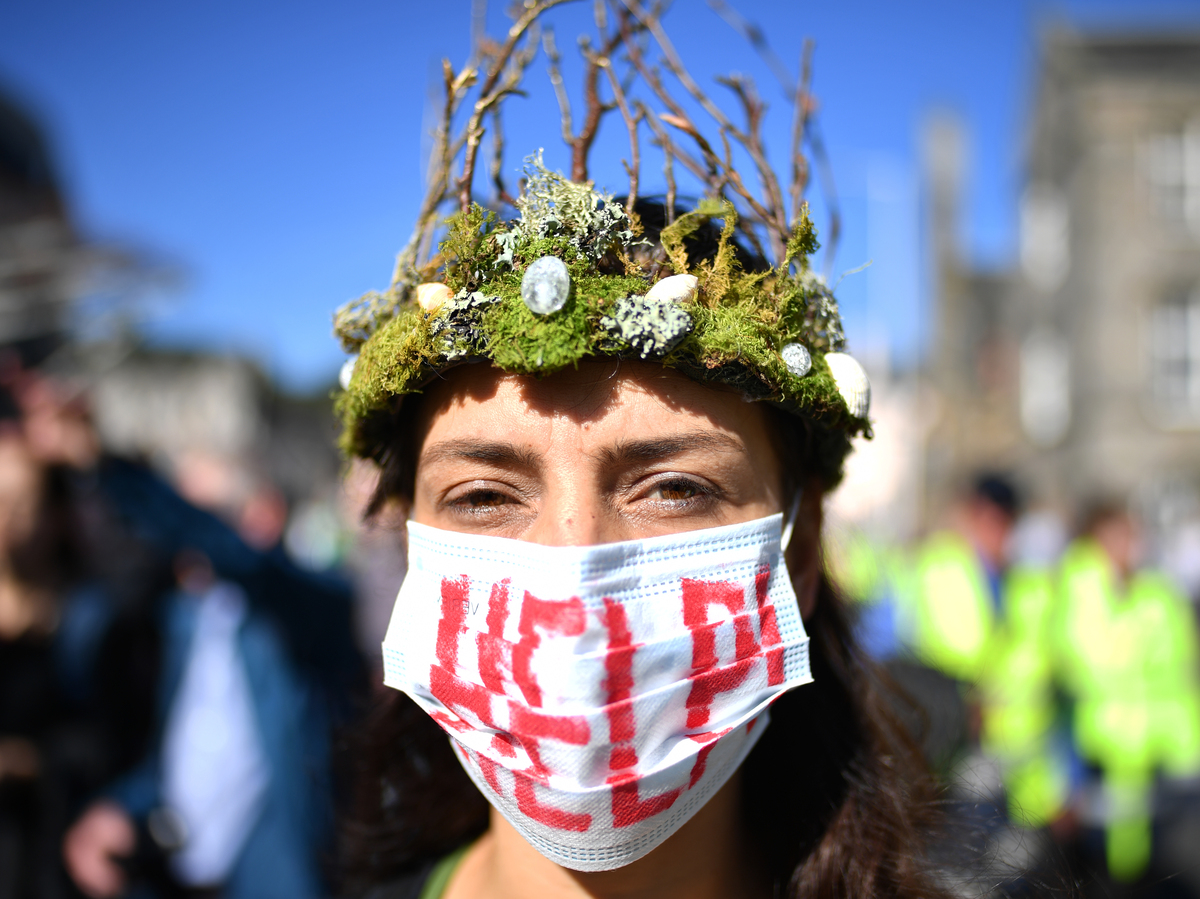 The Global Climate Strike drew scores of protesters around the world Friday, as young people answered a call from activist Greta Thunberg to demand action on climate change. Here, a protester attends a rally in Edinburgh, Scotland. 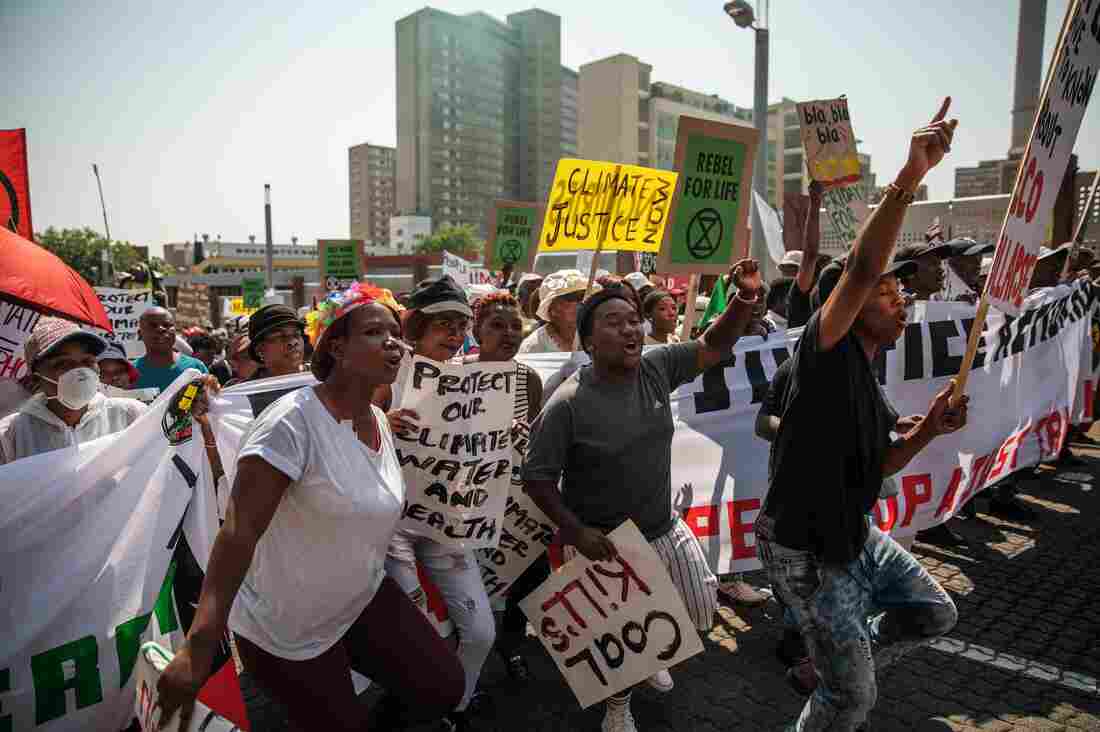 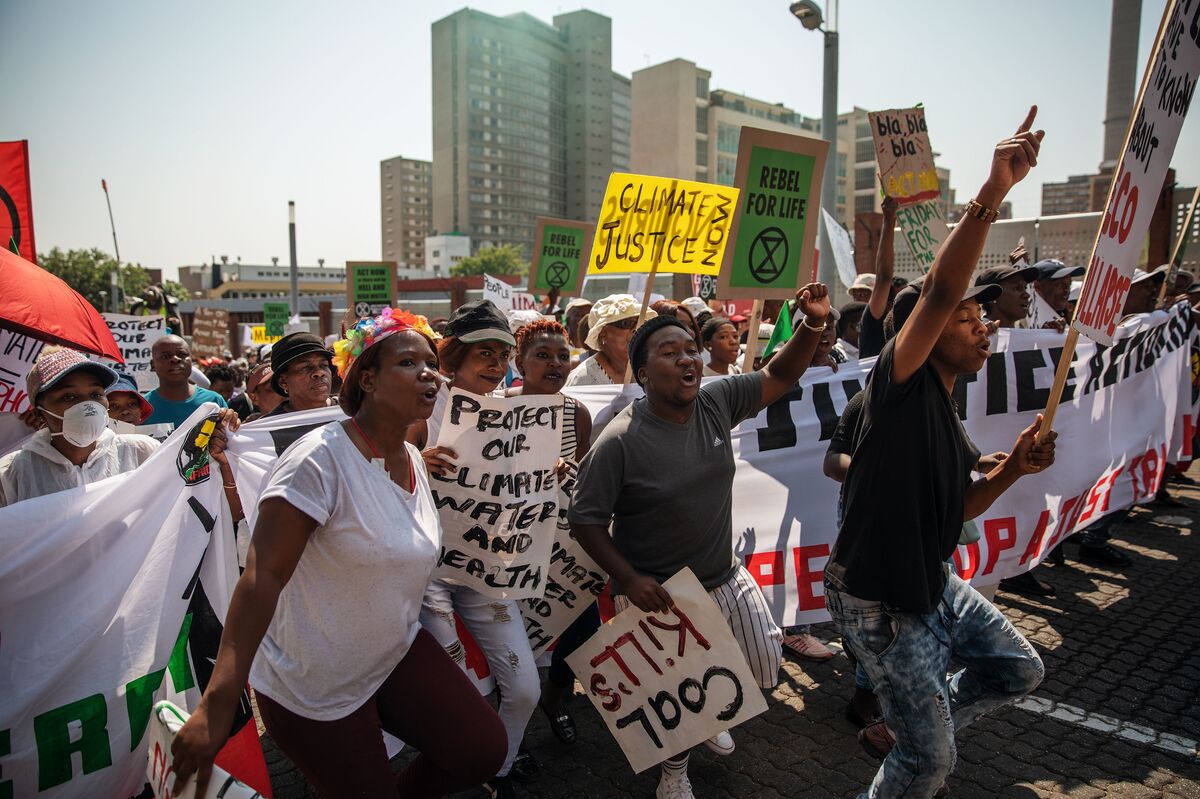 Protesters march during a Fridays for Future rally against climate change in Johannesburg, South Africa.

"Even though this movement has become huge and there have been millions of children and young people who have been school striking for the climate," Thunberg says, "the emission curve is still not reducing ... and of course that is all that matters."

"I've never been to a march before," she told NPR's Jeff Brady. "And I think this is just amazing, that this many people gathered to protest something" on a global level, said Keys, who traveled from Warwick, N.Y., with her mother for the rally. Climate protesters from D.C., Maryland and Virginia converged on the Capitol in Washington, D.C.

The protests began in the U.S. hours after massive rallies kicked off in many European countries, from Denmark and Poland to France and the U.K.

In Germany, hundreds of thousands of marchers took to the streets in cities such as Munich, Hanover, Hamburg and Freiburg. And on the same day as the protests, Chancellor Angela Merkel's government agreed to a landmark $60 billion package designed to cut Germany's greenhouse gas emissions.

Over 50’000 in #Hamburg according to early reports #FridaysForFuture #ClimateStrike pic.twitter.com/C9a7jytAN6

"Chanting, 'The time is now' for action on climate change, thousands of people gathered at Berlin's Brandenburg Gate, forcing police to close access to the monument due to overcrowding," NPR's Rob Schmitz reports from Berlin. "Thousands more gathered in Warsaw and Prague. In Finland, crowds of demonstrators in costumes protested outside Parliament in Helsinki. One man dressed as Santa Claus held a sign declaring, 'My house is on fire.' "

The protests come ahead of the U.N. Climate Action Summit that begins Monday in New York. In March, a similar demonstration inspired by Thunberg drew crowds around the world, including thousands of young students who skipped school to attend.

The global movement has taken root in many countries, as young people reflect on the current condition of the world — and how their lives might be shaped by the consequences of allowing global average temperatures to keep rising. On Friday, the voices included children from Abuja, Nigeria.

In Athens, waves of people gathered outside the Greek Parliament, with some of them holding signs that read, "Raise your voice, not the sea level." 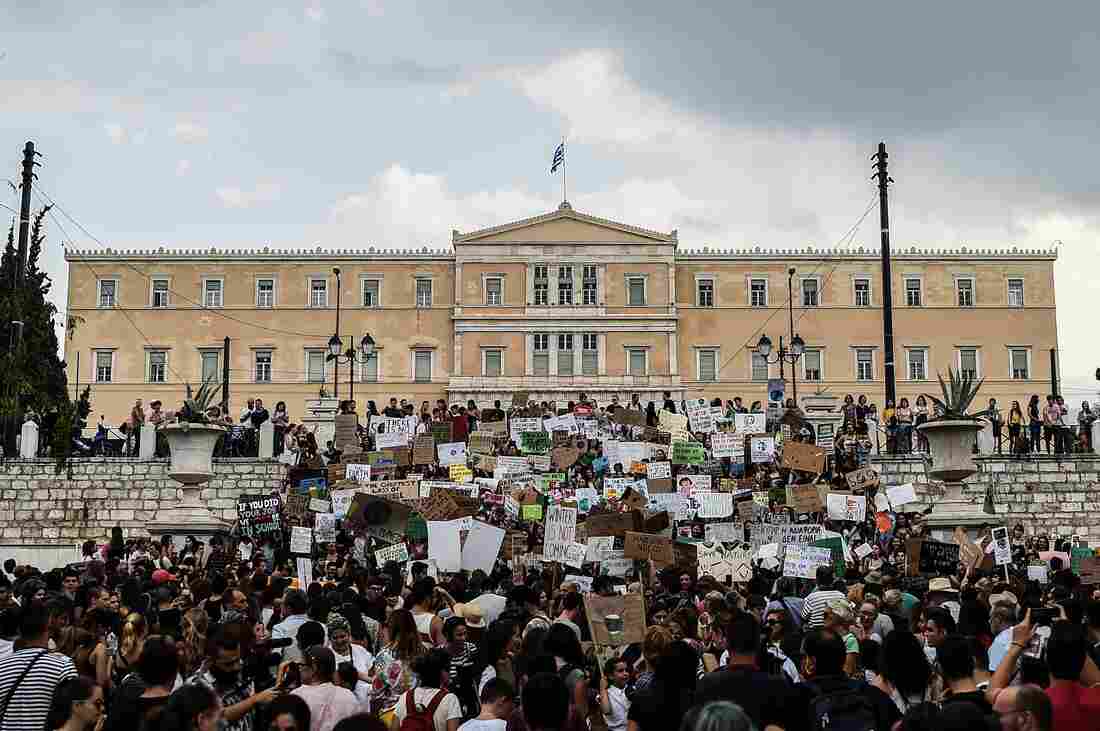 People take part in a demonstration in front of the Greek Parliament in Athens. Angelos Tzortzinis/AFP/Getty Images hide caption 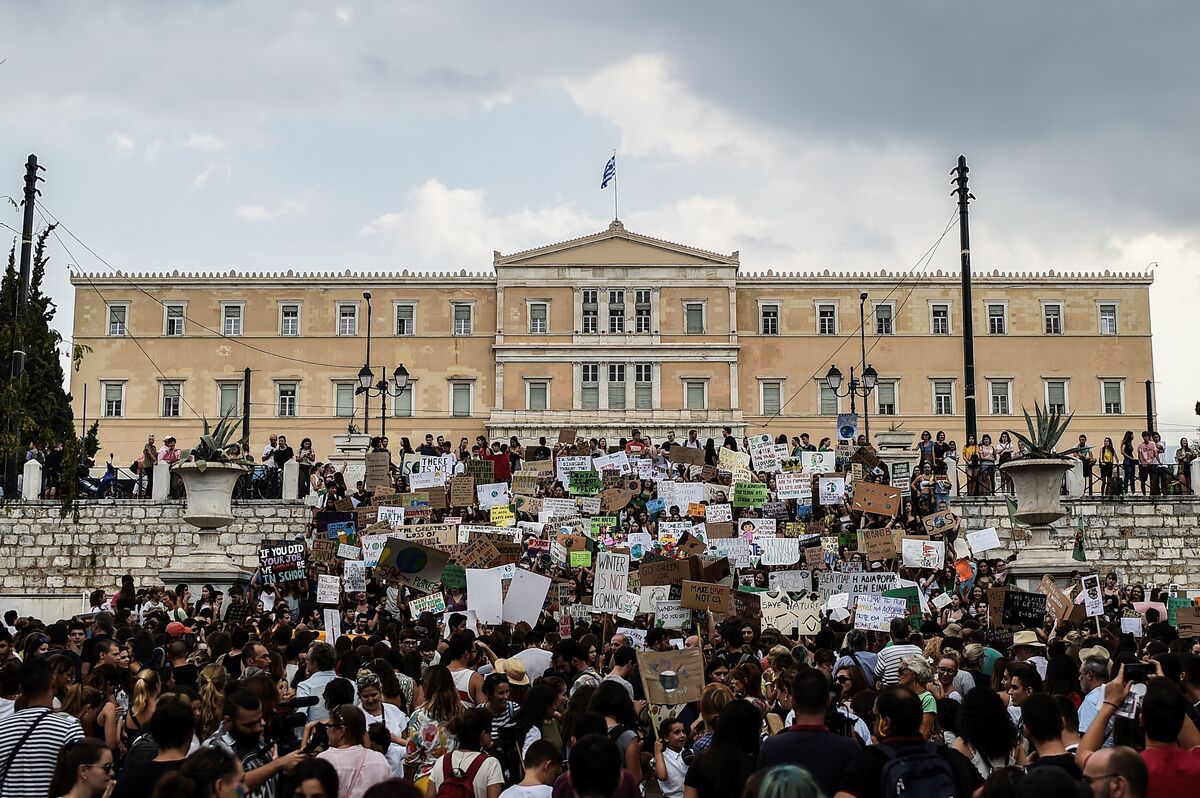 People take part in a demonstration in front of the Greek Parliament in Athens.

In Islamabad, protesters braved a heat wave to cheer on the minister for climate change, Malik Amin Aslam, who promised to fight for the planet.

"They gathered in the late afternoon, in a nod to already unseasonably hot weather affecting the country, considered one of the world's most vulnerable to climate change impact," NPR's Diaa Hadid reports. "Protesters included teenagers in school uniforms, scouts, Red Cross volunteers and a contingent of transgender women, including a woman who raised a placard reading, 'Make The Planet Green Again.' "

Eman Ghani, 15, said she is protesting because she's angry that political leaders were complacent to the risks of global warming.

"It's mad; the people who should be bringing change in the world are not," she said. "The old people who have power are not using their power, and the young people who don't have it can only speak up."

Huge crowds at the Islamabad #ClimateMarch. There is suddenly a climate movement in Pakistan. #ClimateActionNow pic.twitter.com/jp9jHusiAL

Organizers say more than 300,000 people gathered at more than 100 rallies in cities around Australia, most notably in Melbourne, where an estimated 100,000 turned out, and Sydney, which reportedly saw 80,000 attend. Tens of thousands more are said to have marched in the capital, Canberra, as well as Perth, Brisbane and Adelaide.

The numbers of participants could not be immediately verified.

In Sydney, 18-year-old Moemoana came from Wollongong to protest on behalf of her native Samoa, one of thousands of low-lying islands around the world that are particularly threatened by rising sea levels due to climate change.

18-year-old Moemoana, (centre) has come from Wollongong to the protest, and her homeland is Samoa.
“It’s a real threat and Australia needs to know that Pacifika are neighbours and Australia really needs to help out."#climatestrike pic.twitter.com/67bvwsdnuU

"The Pacific Islands are meters above sea level because of climate change and it's a scary future for our islands," she was quoted by The Guardian Australia as saying. "We want to urge people to take some action."

Australia is the world's largest exporter of coal and liquefied natural gas — both major contributors to greenhouse gas emissions. Australian Prime Minister Scott Morrison, who is in the U.S. for a state dinner with President Trump, has been criticized for not including the U.N. Climate Action Summit on his itinerary.

At least 2,000 companies in Australia gave employees time off to attend the rallies, according to The Sydney Morning Herald. Meanwhile, the country's acting prime minister, Michael McCormack, speaking in Melbourne, called the rallies "just a disruption" and expressed displeasure with students attending the protests. 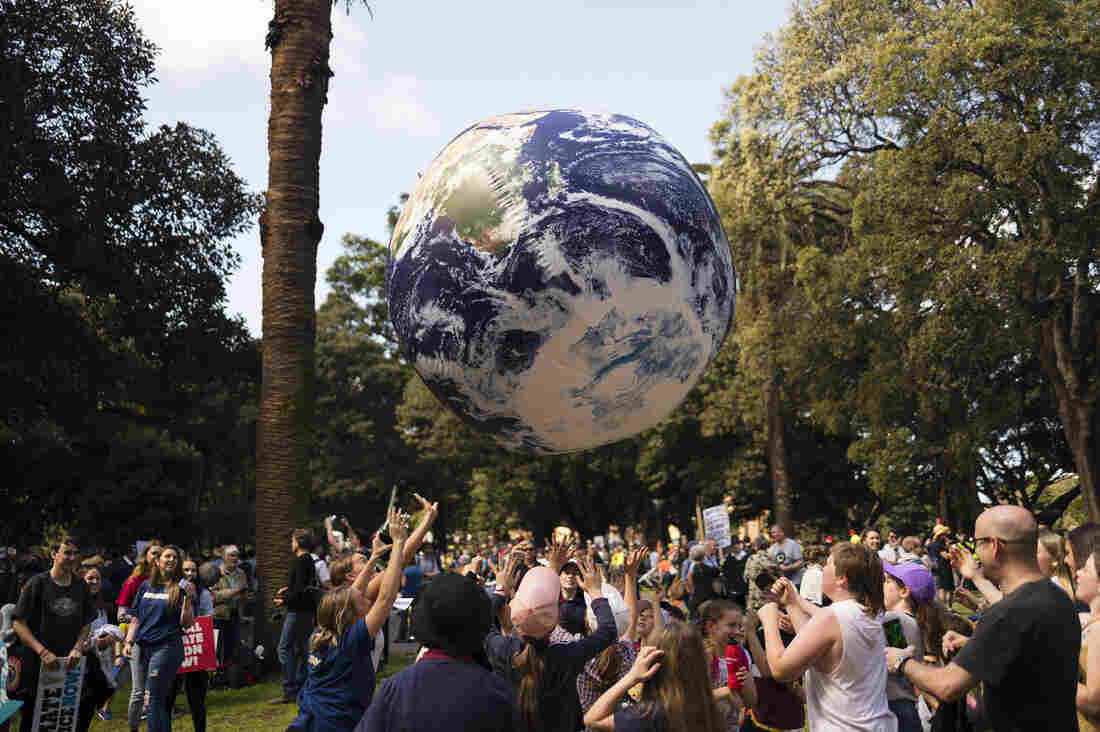 Protesters throw a large globe in Sydney. Rallies held across Australia are part of a global day of action demanding action on the climate crisis. Brook Mitchell/Getty Images hide caption 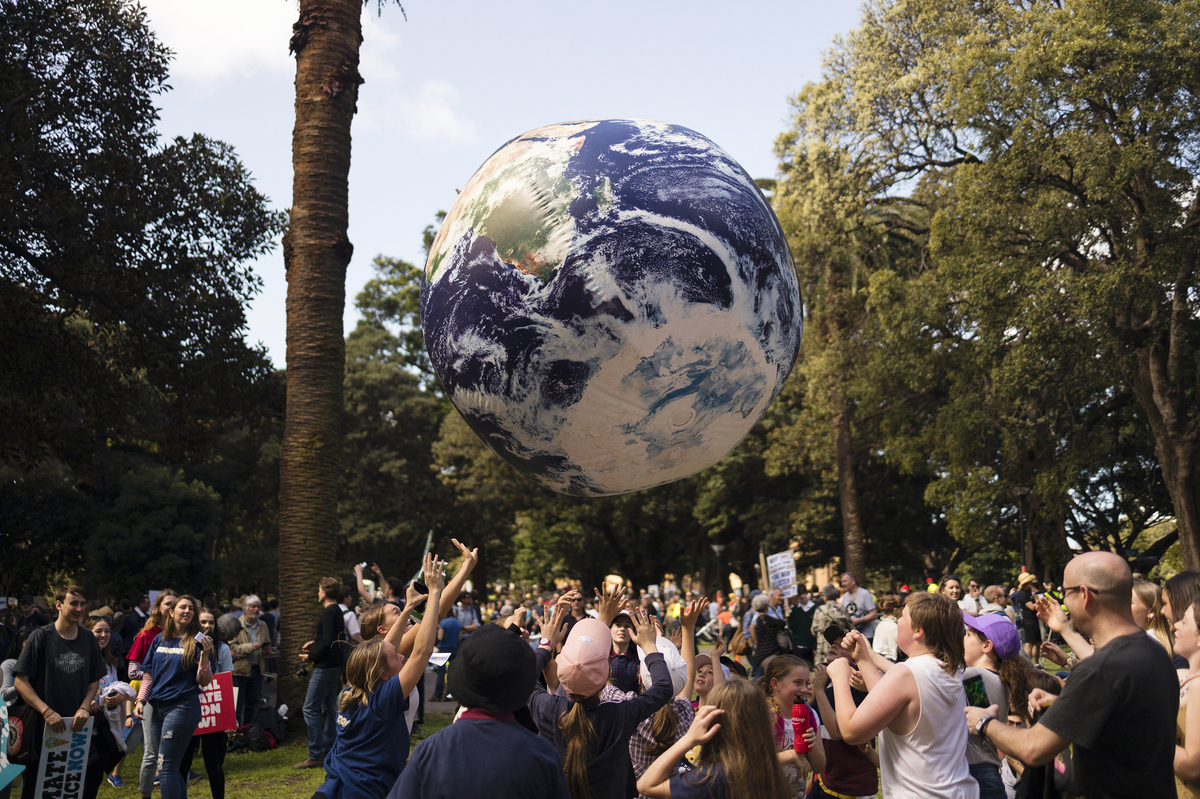 Protesters throw a large globe in Sydney. Rallies held across Australia are part of a global day of action demanding action on the climate crisis.

In Kirabati, a Pacific island chain that experts fear could be inundated by sea level rise in the next 25 years, protesters carried signs that read: "We are not sinking, we are fighting."

Some 200 young activists marched to the Ministry of Environment in Bangkok, where they dropped to the ground in mock death to demand that the government declare a climate emergency. 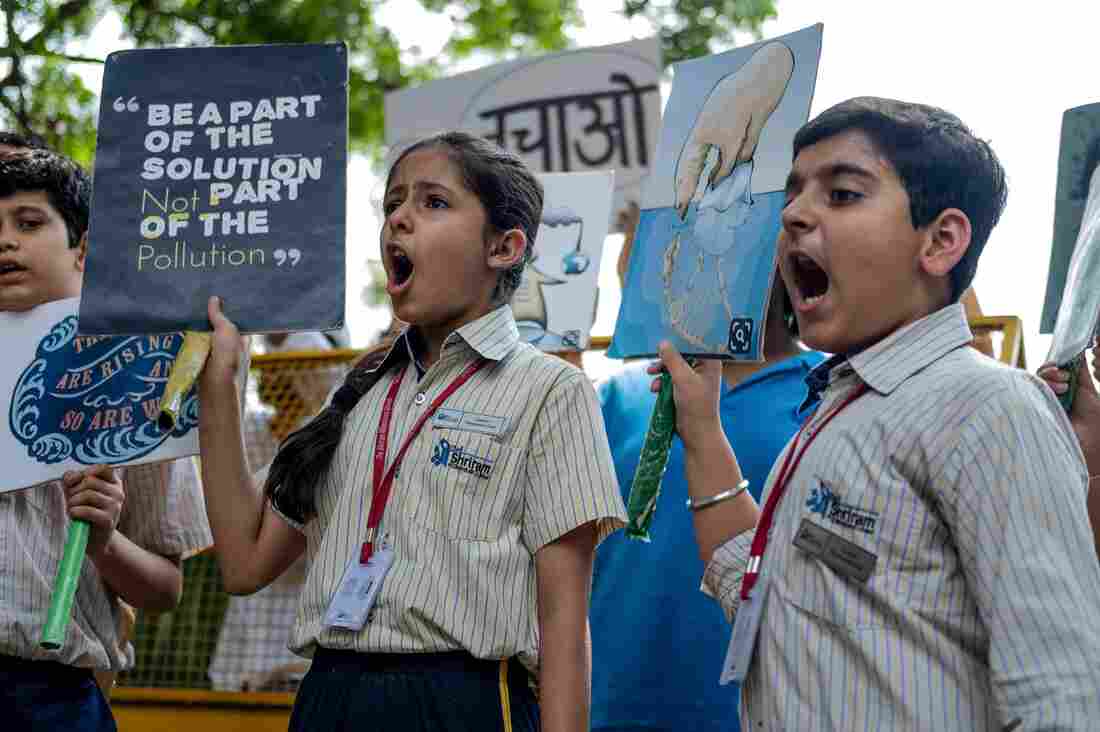 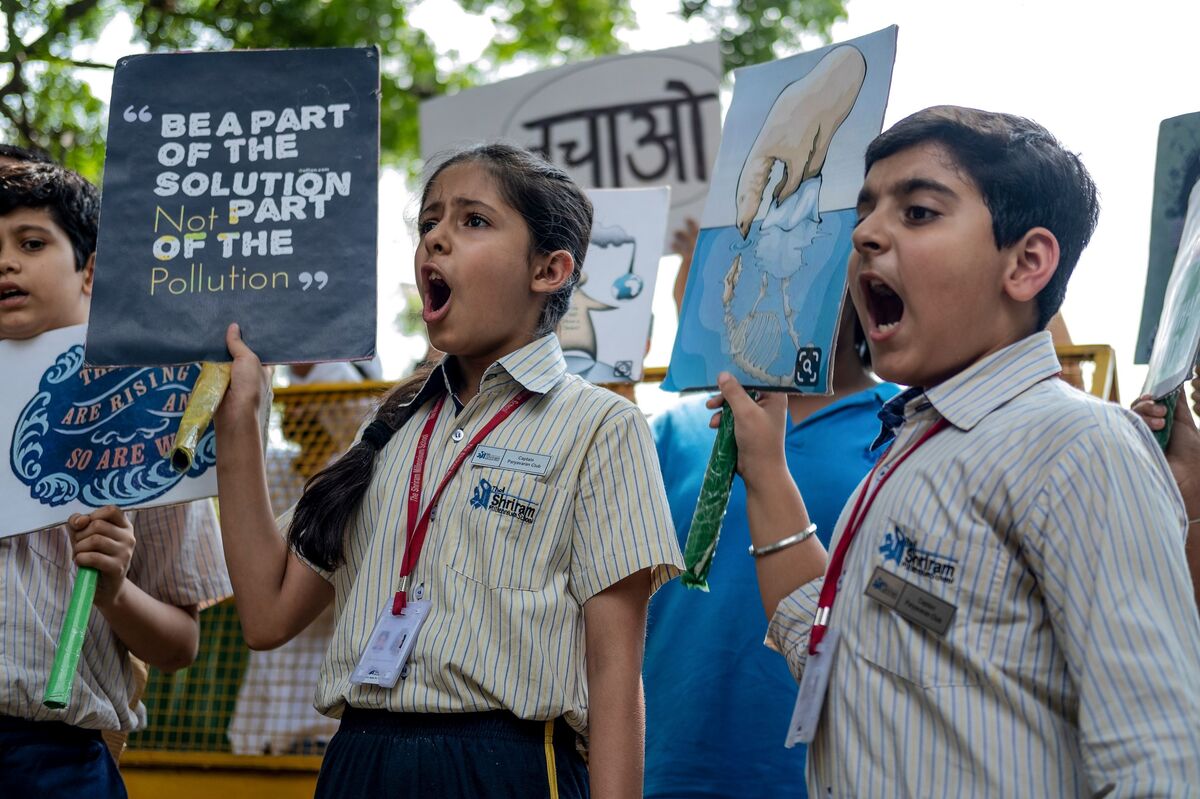 Children shout slogans as they participate in a climate strike in New Delhi.

In India, dozens of students and activists rallied in the capital, New Delhi, outside the country's Ministry of Housing and Urban Affairs, carrying banners that read "Eco, not ego!" and chanting, "I want to breathe clean."

Thunberg has motivated millions of people to think more deeply about climate change and its future effects. And despite her young age, she makes her argument in blunt terms, seeking to cut through the entropy that has hovered around climate issues for years.

"You are not mature enough to tell it like it is. Even that burden you leave to us children," Thunberg told the grown-ups at a U.N. climate change conference in Poland last year, when she was just 15.