Accessibility links
Book Review: 'They Will Have To Die Now' Is A Bare-Knuckles Account Of The Fight Against ISIS James Verini's book will stand up with some of the best war reporting, as he takes an unblinking look at the dirtiest kind of battle — urban combat — and the human wreckage it leaves in its wake. 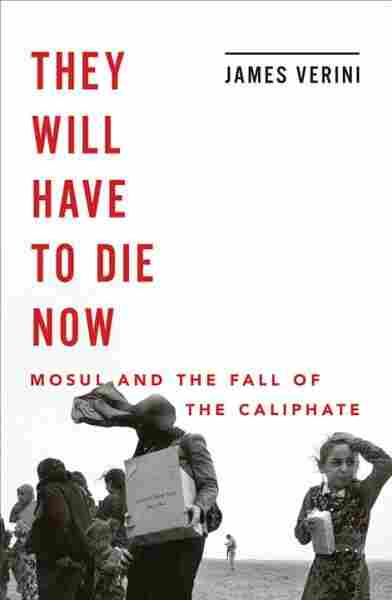 They Will Have to Die Now

Mosul and the Fall of the Caliphate

James Verini calls himself a "coward and a hypocrite."

Why? For not having the guts to cover the Afghanistan war after reporting on the destruction of the World Trade Center as a young reporter.

Heading to Mosul in the summer of 2016, he says, to write about life under the Islamic State was a kind of "penance."

First of all, he's too hard on himself. Secondly, he has written a vivid and bare-knuckles account of the fight against ISIS. They Will Have to Die Now: Mosul and the Fall of the Caliphate will stand up with some of the best war reporting. He takes an unblinking look at the dirtiest kind of battle — urban combat — and the human wreckage it leaves in its wake.

Verini is a gifted writer and storyteller who has written for National Geographic and The New York Times magazine, among other outlets, covering conflict zones from Sudan to Rwanda to Afghanistan.

In this book, he follows an Iraqi counterterrorism force charged with taking back the city of Mosul, a unit he rightly calls "the force in which American generals had the most confidence." Rank-and-file Iraqi soldiers — like their Afghan counterparts I have covered — just don't share the overall competence.

Some of his observations may be too harsh for gentle readers, such as his heartbreaking depiction of a young girl who watched her mother die under fire, then went insane eating shards of broken glass. And there are more than a few beheadings, hangings and other atrocities favored by ISIS fighters. Still, it's important for readers to understand what the world faces with such groups.

He has some nice vignettes from following the counterterrorism troops and their leader, Gen. Abdulwahab al-Saadi, whom he describes as "tall, taciturn, exquisitely aloof, handsome in that universal military way."

He writes, "He wanted to be as close to the fighting as possible. Only leaving when he got bored."

Verini carefully weaves in the Islamic State's beginning in Mosul, but he dwells too much on ancient history, taking the reader back to 612 B.C. and then through the Middle Ages. I wanted more recent history, the policy choices, the missteps that led to ISIS gaining a vast swath of territory in both Iraq and Syria. Like Prime Minister Nouri al-Maliki's decision to replace stellar American-trained officers with "amateur loyalists," and Maliki's decision to hunt down Sunni leaders and further marginalize their followers. Both moves led to quick ISIS gains and the continuation of ethnic tensions that still haunt Iraq.

And he could have done more on the Obama administration's decision to pull all U.S. troops out of Iraq in 2011, which gave Maliki a free pass and paved the way not only for the rise of ISIS but for the need for U.S. troops to head back in. U.S. military officers I know urged the administration against this course, knowing all too well what would happen.

He does not give the U.S. military a free pass for its constant use of airstrikes in Mosul, a teeming city where such actions could only increase civilian casualties. Washington, he writes, "claimed the accuracy of the air war was second to none." Military leaders called every airstrike a "resounding success." Verini is spot-on skeptical. Missiles were coming in constantly. "How accurate could they be?" The U.S. military has still not come clean on this issue, and human rights groups point to far higher civilian casualties than the numbers provided by the Pentagon.

Verini's book is an important firsthand account of the human cost of war, the civilians caught up in this special kind of hell, and the difficulty of fighting a terrorist group in an urban environment. There will be other such fights.

Hopefully, reporters of the caliber of James Verini will be on the front lines.