Accessibility links
California, 22 Other States Sue Trump Administration Over Emissions Standards The lawsuit comes two days after the Trump administration revoked California's ability to set its own rules for automobiles. The state's top prosecutor blasted the move as "arbitrary and capricious." 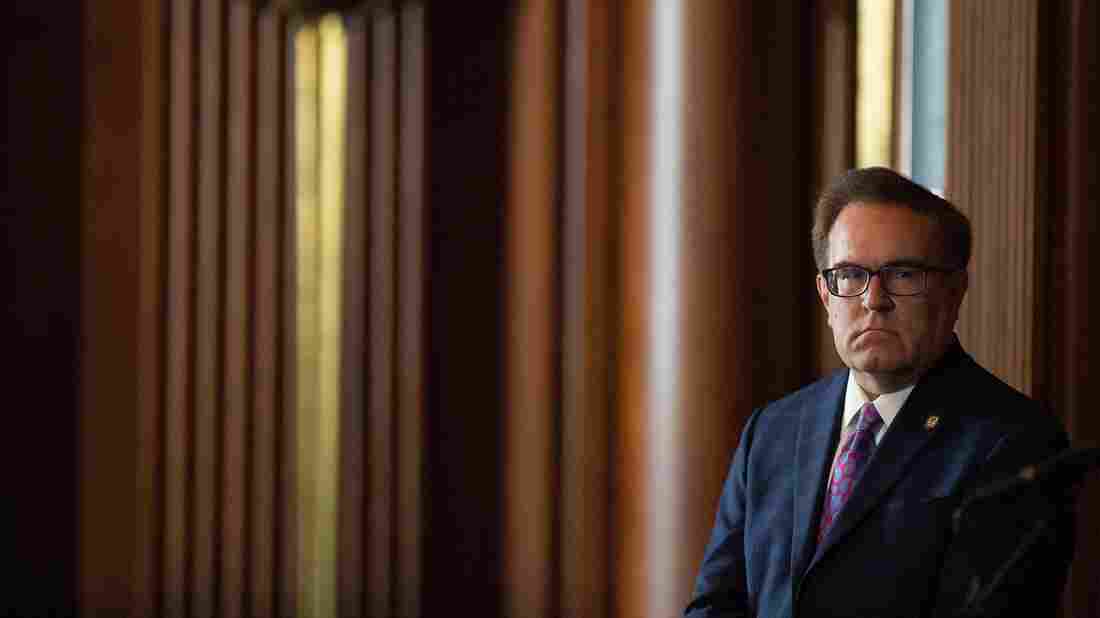 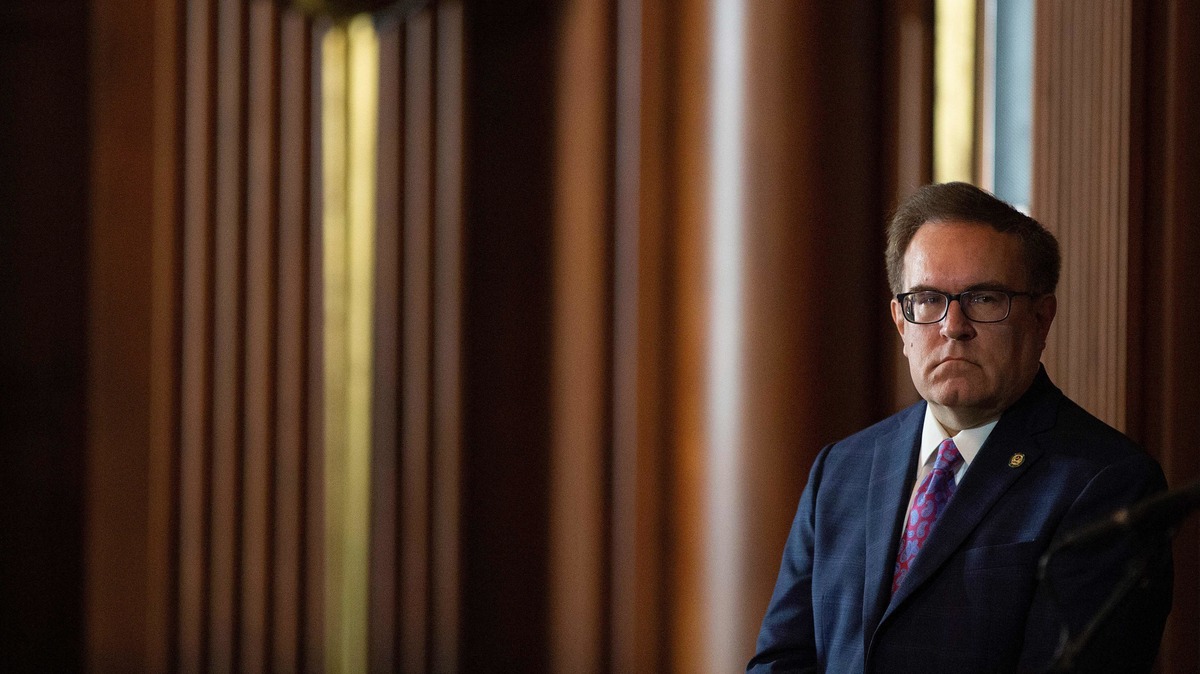 Andrew Wheeler, administrator of the Environmental Protection Agency, looks on during a news conference Thursday at the agency's headquarters in Washington, D.C.

Just two days after the Trump administration revoked California's right to set its own emissions standards for automobiles, the state has fired back.

California, 22 other states and several major cities filed a lawsuit in federal court Friday against the National Highway Traffic Safety Administration, which is the division of the Department of Transportation that issued the rule revoking California's authority.

The move "exceeds NHTSA's authority, contravenes Congressional intent, and is arbitrary and capricious, and because NHTSA has failed to conduct the analysis required under the National Environmental Policy Act," states the complaint filed in the U.S. District Court for the District of Columbia.

The National Environmental Policy Act, signed into law in 1970, is considered a kind of "national charter" for regulating the protection of the environment.

"Two courts have already upheld California's emissions standards, rejecting the argument the Trump Administration resurrects to justify its misguided Preemption Rule," California Attorney General Xavier Becerra said in a statement released Friday. "Yet, the Administration insists on attacking the authority of California and other states to tackle air pollution and protect public health."

Becerra and his 23 co-plaintiffs — which comprise Democratic attorneys general from 22 states and the District of Columbia, as well as the cities of Los Angeles and New York — are demanding that the Trump administration's move be declared unlawful and be repealed.

"Remarkably," their complaint explained, "NHTSA has conducted no analysis at all of the environmental impacts of a regulation that purports to preempt air pollution laws in effect in states that represent more than a third of the nation's automobile market."

In a conversation with All Things Considered after the lawsuit was filed Friday, Environmental Protection Agency Administrator Andrew Wheeler said that California's fuel economy standards would effectively "end up applying to the entire country" — because automakers would be unlikely to make two separate versions of the same car to comply with differing state regulations.

"What we are talking about here is energy efficiency," Wheeler said, "and that is something that we don't believe the state of California or any other state should be setting for the entire country."

This week's back-and-forth marks a new — and not entirely surprising —escalation in the fight over climate policy between the Trump administration and the country's most populous state. Earlier this month, the Department of Justice launched an antitrust investigation into a deal struck in July between California and four major automakers, Ford, Volkswagen, Honda and BMW.

Under the terms of the agreement, which the administration says may be illegal, the companies said they'd produce passenger vehicles averaging 51 miles per gallon by model year 2026, a timeline that accords with regulations set by the Obama administration.

Under Trump, the EPA has sought to roll back many of the environmental rules put in place by Barack Obama — not just when it comes to fuel economy standards, but also methane emissions, air pollution and coal plants, among others.

These efforts at deregulation have put the Trump administration squarely at odds with the California state government — and California politicians say they have no intention of backing down, including when it comes to this most recent fight.

"The Oval Office is really not a place for on-the-job training. President Trump should have at least read the instruction manual he inherited when he assumed the Presidency, in particular the chapter on respecting the Rule of Law," Becerra said Friday. "Mr. President, we'll see you in court."