Accessibility links
Review: 'A Cosmology Of Monsters,' By Shaun Hamill Shaun Hamill's new novel uses the lens of horror to examine the ways we interact and fail to interact with each other, and the way a family can be held together by the very things that tear it apart.

'A Cosmology Of Monsters' Blends Freaky Frights And Family Feels

'A Cosmology Of Monsters' Blends Freaky Frights And Family Feels 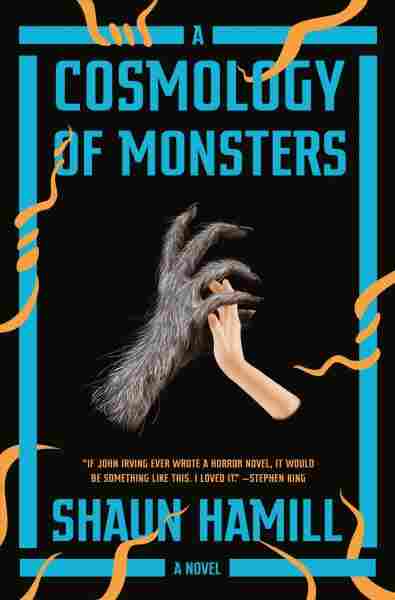 A Cosmology of Monsters

"How long until the world hollows me out?" Eunice Turner asks her younger brother Noah in one of her many letters to him — most of them suicide notes. That question lies at the heart of A Cosmology of Monsters, Shaun Hamill's debut novel. It's a horror tale unafraid to tackle big issues of familial fealty, the architecture of fear, and the metaphysics of love, all while shocking the pants off the reader. Like Lev Grossman's The Magicians, only for horror instead of fantasy, the book examines the way we interact and fail to interact with each other, all bound together with genre delights that are mildly subverted even as they're adoringly celebrated.

Eunice is the writer in her family, but Noah is Cosmology's focus and first-person narrator. When Noah is a boy, his father decides to build a haunted house, but one the likes of which the world has never seen — an immersive experience so frightening and seamless, it's like stepping into a shadow world of our own. (Imagine Welcome to Night Vale crammed inside Meow Wolf.) But there's more inside the warehouse known as The Wandering Dark than tricks and illusions — and there's more beyond it. Dark shapes and stark terror overflow from The Wandering Dark and into Noah's family, where disappearances and dysfunction begin to seize the Turners in a fugue of phantasmagorical tragedy.

Cosmology straddles the line between scares and feels with confidence and flair. Every time it feels as though the John Irving-style family drama is going to overwhelm the story, Hamill injects a heavy dose of Stephen King-worthy horror. He entwines these elements with a deft hand, and when his simmering monster yarn dovetails with his tender love story, there's a grotesque emotional logic to it that's jaw-dropping. There's nothing new about comparing the monsters within the monsters without, but Hamill employs flashes of insight and flourishes of poignancy to chillingly portray a family held together by the very things that are tearing it apart.

It's a book that haunts in a myriad ways, and its monsters are just as often palpably real as they are dredged from the depths of nightmares.

You shouldn't be surprised to find elements of H. P. Lovecraft's cosmic horror in a book titled A Cosmology of Monsters — and sure enough, they're in there. Noah's creature, its race, and its domain will all resonate with fans of the controversial author. Hamill even inserts direct references to specific Lovecraft works into his book, including the famous 1936 novella The Shadow over Innsmouth. What's missing, though, is a more critical engagement with the hateful legacy of Lovecraft's oeuvre, an honest conversation between texts that recent novels such as Victor LaVelle's The Ballad of Black Tom and Matt Ruff's Lovecraft Country have undertaken bravely. Fear in itself is a political weapon these days, and the book does succeed in delving into the menace and dread that comes from living in a state of pervasive fright — but it's also a wasted opportunity to take part in the current Lovecraft discourse in a more meaningful way.

That aside, Cosmology ably conjures existential awe in the face of the unknown alongside a certain intimacy and warmth. The web of relationships Hamill weaves between his characters — particularly between Noah and Eunice, the two most compellingly rendered — makes for a wrenching family saga. The lens of horror is simply a way to constrict, compact, and distort that saga, bending it to fit Hamill's fractured and feral vision of reality. It's a book that haunts in a myriad ways, and its monsters are just as often palpably real as they are dredged from the depths of nightmares. Horrific yet emotionally immersive, A Cosmology of Monsters is equally a cartography of the heart.