Accessibility links
Sidewalk School Aims To Give Migrant Kids A Sense Of Stability In Matamoros, Mexico, volunteers have created a pop-up school on a downtown sidewalk for migrant children. They're all asylum-seekers waiting for their day in U.S. immigration court. 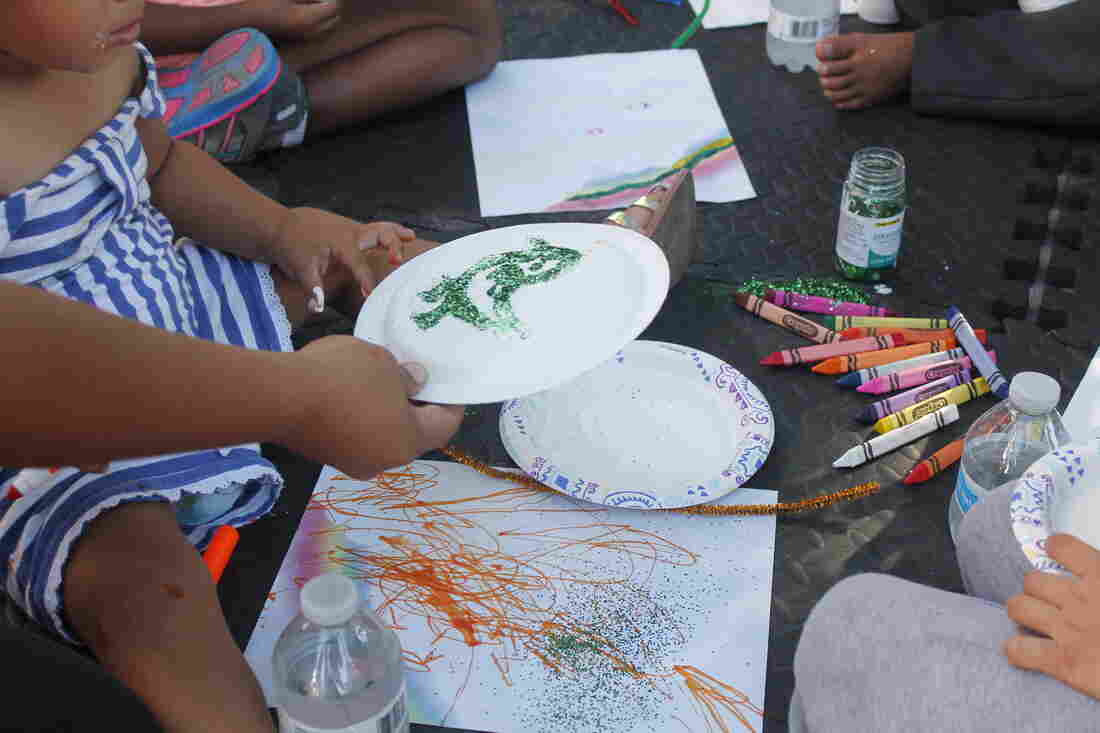 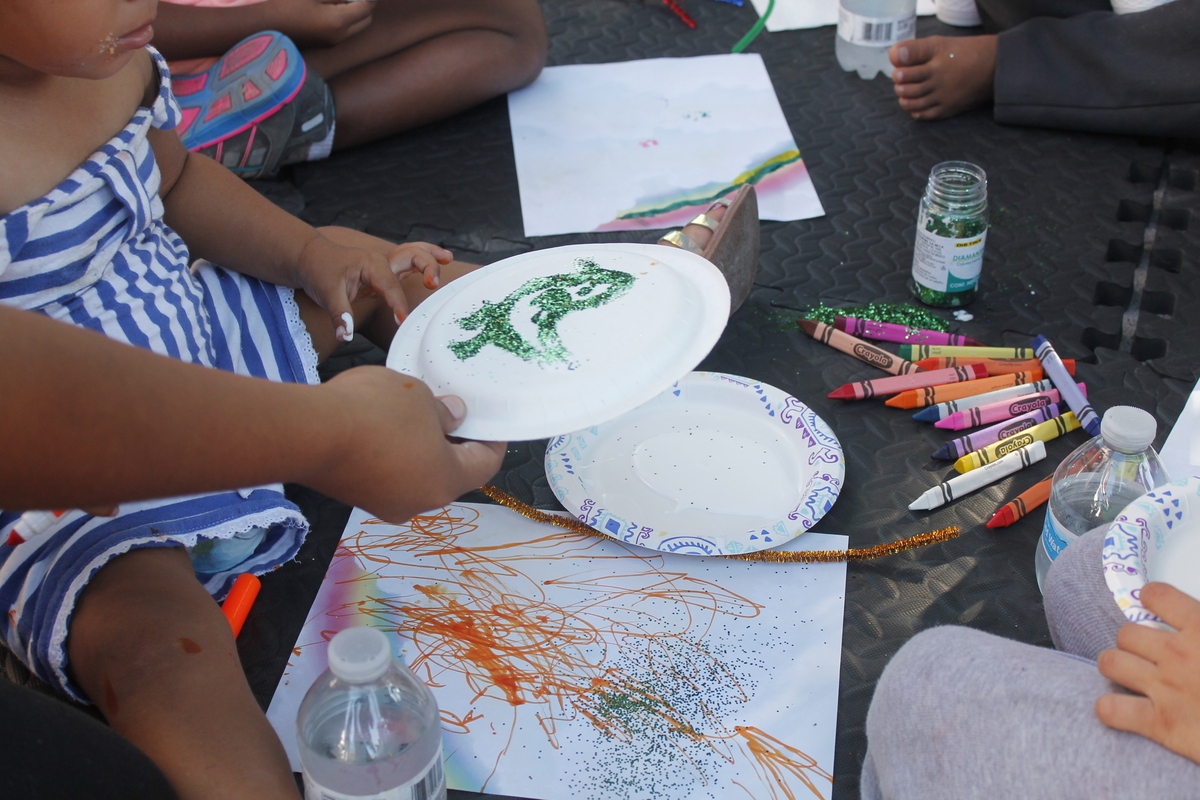 On a recent day, the sidewalk school in Matamoros, Mexico, began with arts and crafts.

It's back-to-school time on both sides of the U.S.-Mexico border, and in the border town of Matamoros, Mexico, migrant children are attending a different kind of classroom.

Volunteers have created a pop-up school on a downtown sidewalk in hopes of giving the kids some sense of stability.

"One, two, three, four ..." Tito, an asylum-seeker from Cuba, counts in Spanish in front of a group of children attending the sidewalk school recently.

He fled his native Cuba because he feared being persecuted for being gay, and he asked that we not use his last name.

Back home he works in finance; here he's leading a math class.

"I try to make the situation here a bit better for the kids and for myself," Tito said in Spanish. "It satisfies me."

He said he can relate to the kids because they're all asylum-seekers, like him. Tens of thousands of migrant families are waiting in Mexican border towns for their day in U.S. immigration court.

Here, in Matamoros near the international bridge, asylum-seekers are camping out and the children play in the small plaza. Another volunteer teacher asks the children if they like to paint and decorate as some of them rush over.

School starts with arts and crafts. The children will draw on a paper plate, then outline it with glue and drop glitter. Then they hang their creations from trees.

"I wanted them to see other people appreciate the artwork they did and let them know how important they are, too, even to people who are just walking past and driving by," said Felicia Rangel-Samponaro. "It's beautiful work."

Samponaro organizes this sidewalk school. Every Sunday morning, about 50 children attend to learn their numbers, letters and arts and crafts. All the teachers are asylum-seekers themselves.

Samponaro used to be a teacher in Houston and has volunteered for a migrant aid group that does work in Matamoros. 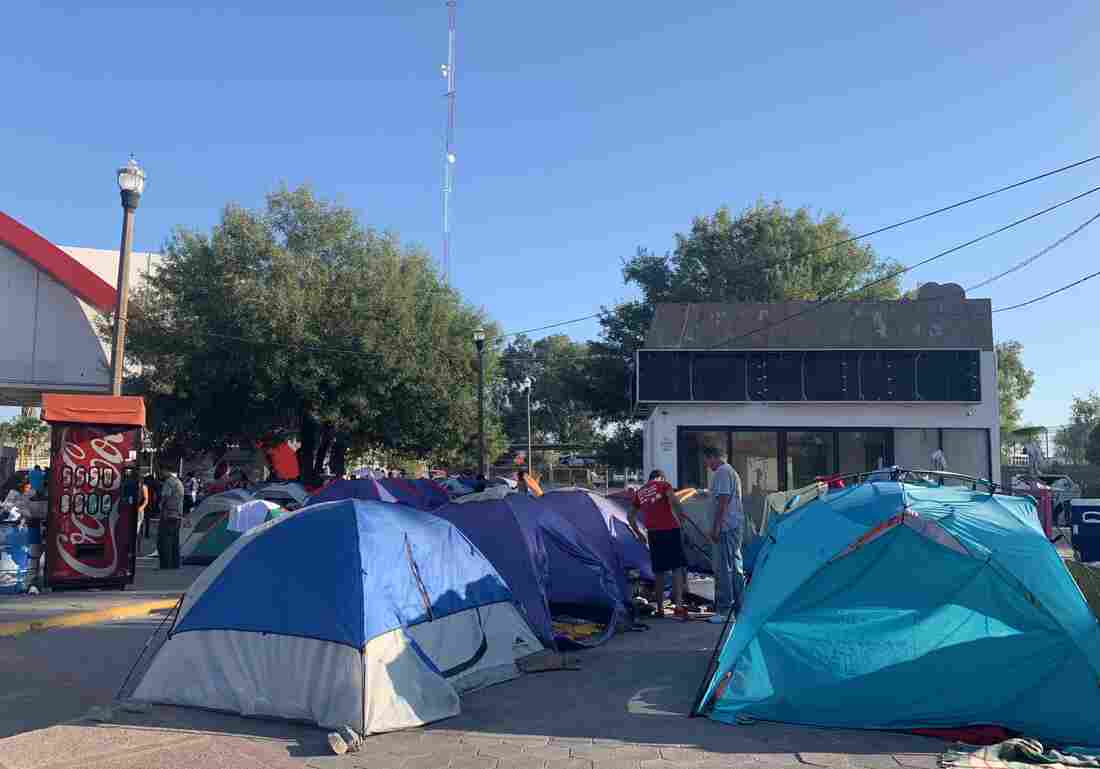 In the border town of Matamoros, Mexico, asylum-seekers camp out as they wait for their day in U.S. immigration court. Reynaldo Leaños Jr. /Texas Public Radio hide caption 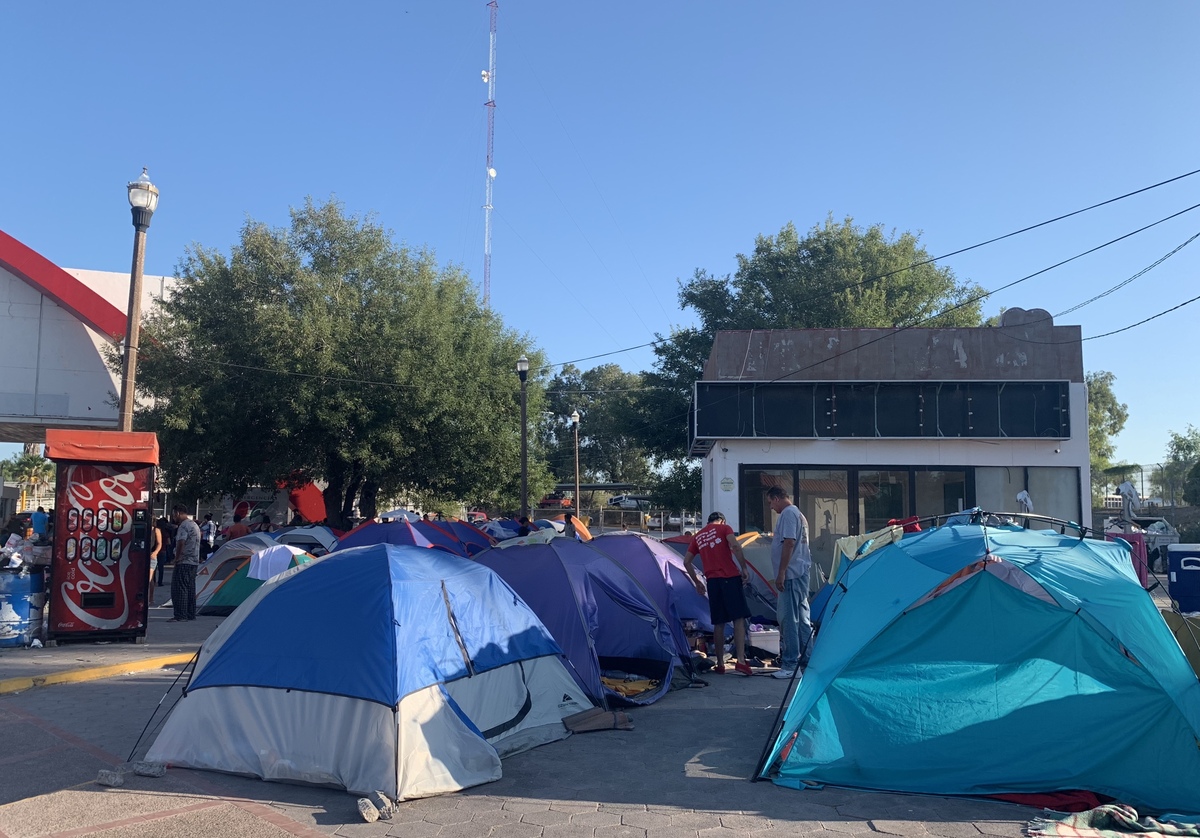 In the border town of Matamoros, Mexico, asylum-seekers camp out as they wait for their day in U.S. immigration court.

"I wanted this to feel like a community because they do have to stick together," said Samponaro. "Matamoros is one of the most dangerous cities, and they do take turns sleeping out here; they have to watch out for each other."

Immigrant advocates say some asylum-seeking parents aren't sending their kids to Mexican schools because they're afraid to be apart from them. Crime is common here, and kidnappings have been reported. Other parents say registering for school in Mexico is difficult.

But Samponaro wants the kids to be able to continue their education. And she says many of the asylum-seekers have skills they can put to use at the school. Parents are grateful, too.

One mom named Maria had just arrived in Matamoros the day before with her 5-year-old son, a shy boy who loves animals and whose favorite subject is science. She asked that we not use their last names because they fear for their safety. They had fled from Guatemala. She said the sidewalk school is "really beautiful" and she's glad the kids are being entertained.

Another mom from Honduras, who also asked not to be named for safety reasons, brings her two kids to class. She says she knows her children will be safe at the sidewalk school, and it gives her time to meet with an immigration lawyer.

Volunteer attorneys have been coming over on the weekends to give free legal advice. The asylum-seekers could wait for months to be able to make their asylum case in the U.S.

Ray, another asylum-seeker from Cuba, said the process isn't easy.

Back home, Ray was an English professor and fled his country because he also feared being persecuted. He reads with the children at the sidewalk school. He said the children look forward to it all week. He said the kids always hug him and thank him and the other teachers.

"They ask you are we doing the school on Sunday, so they're very cheerful and looking forward to it," said Ray.

This week the sidewalk school is adding story time on Saturday nights.