The Dog Who Lost His Bark is about a boy rescuing a dog and a dog rescuing a boy. Author Eoin Colfer says he loves it when parents tell him they read the book aloud to their kids at bedtime — but then sneak it away to find out what happens next. P.J. Lynch/Candlewick Press hide caption

Author Eoin Colfer knows the world has plenty of "boy-and-his-dog books." So if you want to write a book about a boy and his dog, he says, "you have to have something new."

Colfer's The Dog Who Lost His Bark is a book in two halves: "In the first half the boy heals the dog, and in the second half the dog heals the boy," Colfer explains. Music plays a role in helping both characters cope.

'Superpower Dogs' Shows That Canines Are 'Saving Us Every Day'

P.J. Lynch illustrated the book. His wife fosters dogs in their home — "we usually have a few pups running around the place making a mess," Lynch says — and the focus of the book really took shape one night when Colfer was over at Lynch's house for dinner.

Colfer and Lynch are family friends. Colfer calls himself a "late bloomer" — he didn't start publishing books until his 30s — and he always looked up to Lynch who started his illustration career straight out of university. The two had collaborated before and were excited to take on another project together.

On finding inspiration for the book

Colfer: I was in P.J.'s house for dinner and I wanted desperately for us to work together again. ... I had a few ideas I was playing around with, and one of the ideas was a rescue dog that, in turn, rescues the boy who has rescued him. But I couldn't find a way into it until P.J.'s son started playing the piano — he's a wonderfully gifted piano player — and the dog that they were fostering at the time loved the music and it was just giving little barks and wagging his tail. And that was like a thunderbolt of inspiration for me. 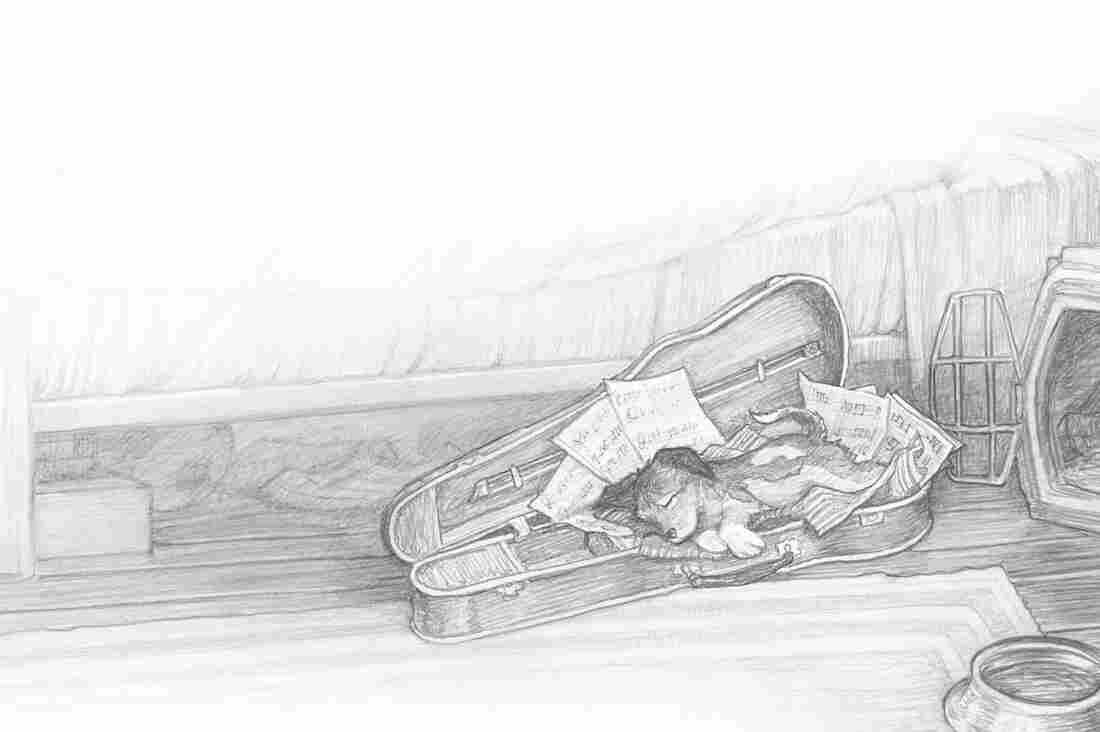 On finding a good model for the dog

Lynch: I was struggling at the start trying to find a face and a form for the dog — you know, trying to get a mixture of character and cuteness. I tried lots and lots of different ones. ... I came home one day, I was a bit despairing, and there were two new [foster] pups in the house and ... one of them was cute and fluffy and the other was less so. So I went for the one that was less fluffy and cute and ... she became the model for the dog, Oz, in the book.

Colfer: I need to have a picture in my head when I'm writing a story and for the longest time I couldn't get the right picture in my head. Even when I'd finished the first edit I wasn't happy with my imaginary dog. So P.J. very quickly did up some sketches and when that first sketch of Oz came in — [I knew]: That's the dog. ... It's a little bit like when you're writing drama or theater — when you get an actor and you see what the actor can do then it really helps to point you in a certain direction. 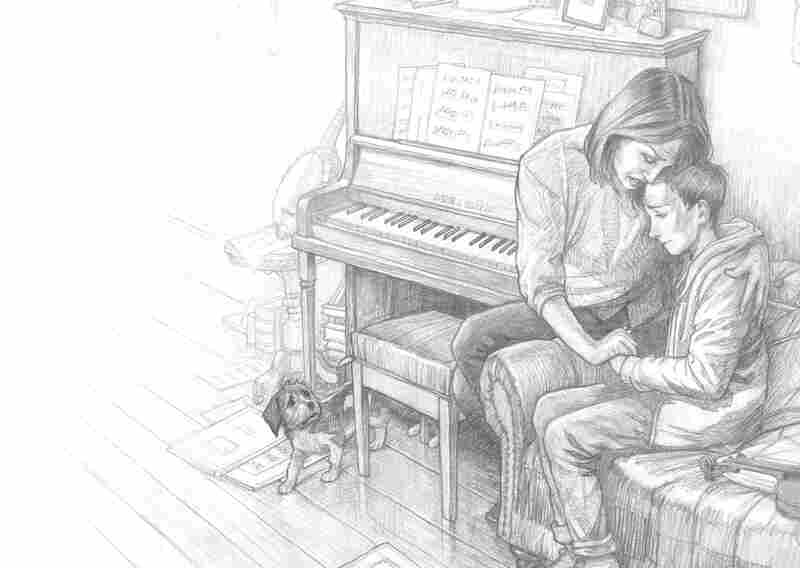 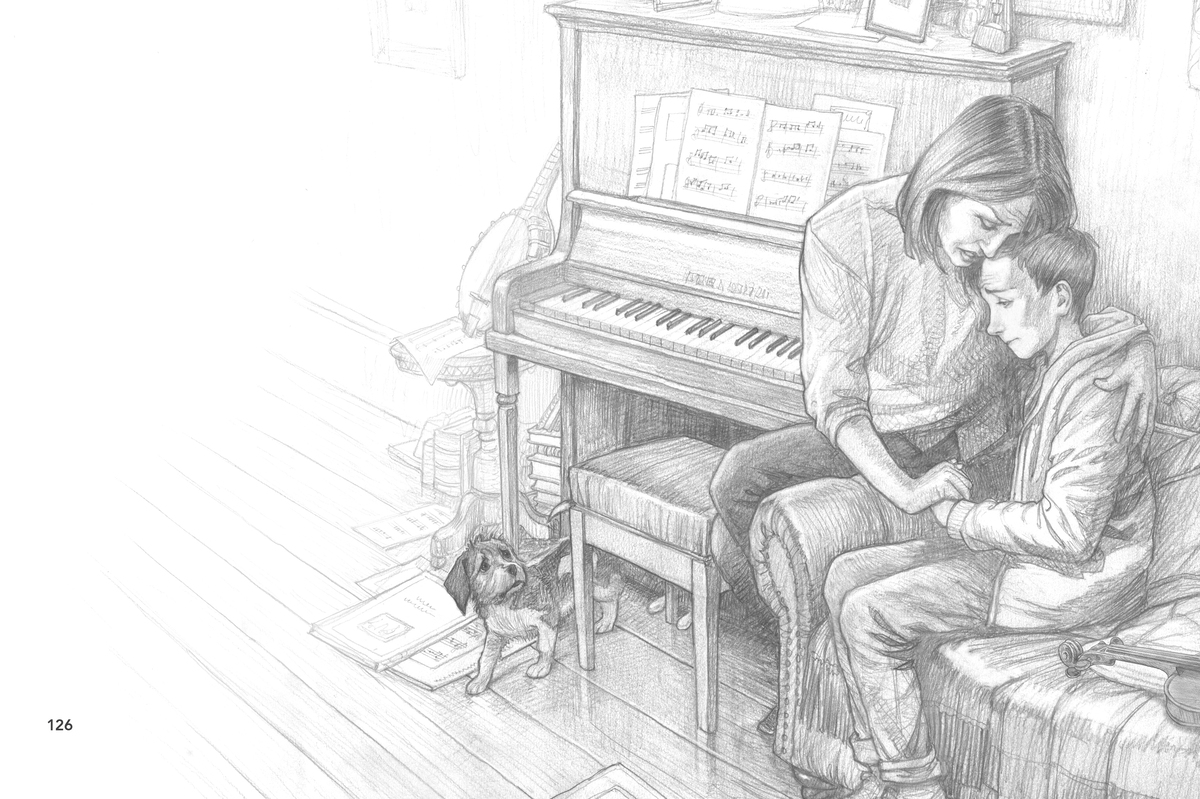 On getting adults hooked, too

Colfer: I'm getting a lot of letters from people who are using it as their nighttime story. So they're reading it to kids who are maybe a little too young to read it themselves ... and they're really enjoying it as a family. ... The absolute best compliment you can get [is when parents say]: "Yes, I'm reading to this to my kids as a family, but when they go to sleep I keep sneaking out and reading the next chapter on my own." I love to hear that because it's kind of mischievous but it also means that the parents are enjoying the story, too.

On the way music helps us cope

Colfer: I've always been very affected by music ... [When] my father died, I used to just listen to the songs that he listened to a lot and it really helped me through it. So then I started to look up music therapy which is a very powerful tool ... and I thought this would be a lovely way to get the importance [of music] ... across to kids. ... It was a nice way for us to get an undercurrent of seriousness into a beautiful story about a boy and his dog. 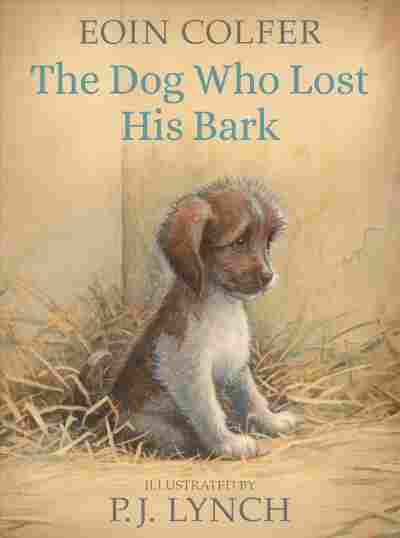 The Dog Who Lost His Bark

On doing school visits together

Colfer: It's good fun and P.J. does live drawing. I could be literally reading the phone book and the kids are just staring at these beautiful drawings appearing out of thin air.

Lynch: [The students] want to do something with their eyes while they're listening. ... The great thing about live drawing is that kids let you get away with anything — you could do terrible drawings and they love it. ...

I remember when I was [a student] at school, we never met authors. I certainly didn't even know illustrators existed. So I'd like to think that some of those hundreds of kids that we've worked with — and drawn and talked for — hopefully they'll be inspired to write their own stories and illustrate their own books.

The Dog Who Lost His Bark. Text copyright 2018 by Eoin Colfer. Illustrations copyright 2018 by P.J. Lynch. Reproduced by permission of the publisher, Candlewick Press, Somerville, Mass., on behalf of Walker Books, London.