Accessibility links
Trial Begins For Former Dallas Cop Who Killed Unarmed Black Neighbor Amber Guyger, who is white, said she entered the wrong apartment thinking it was her own, and shot Botham Shem Jean, 26, because she thought he was a burglar. Her trial begins on Monday. 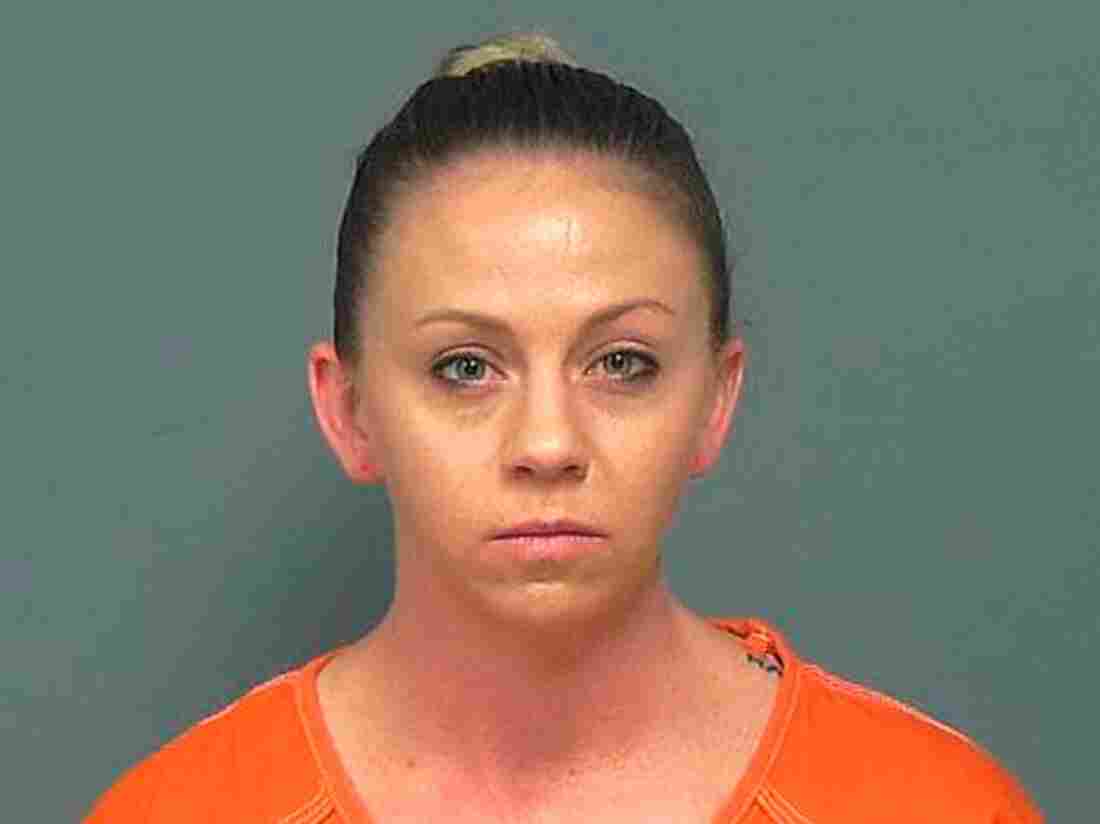 Amber Guyger, the former Dallas police officer who fatally shot an unarmed black man in his own home told a 911 dispatcher, "I thought it was my apartment" several times as she waited for emergency responders to arrive. Guyger is charged in the September, 2018 killing of Botham Jean. Mesquite Police Department via AP hide caption 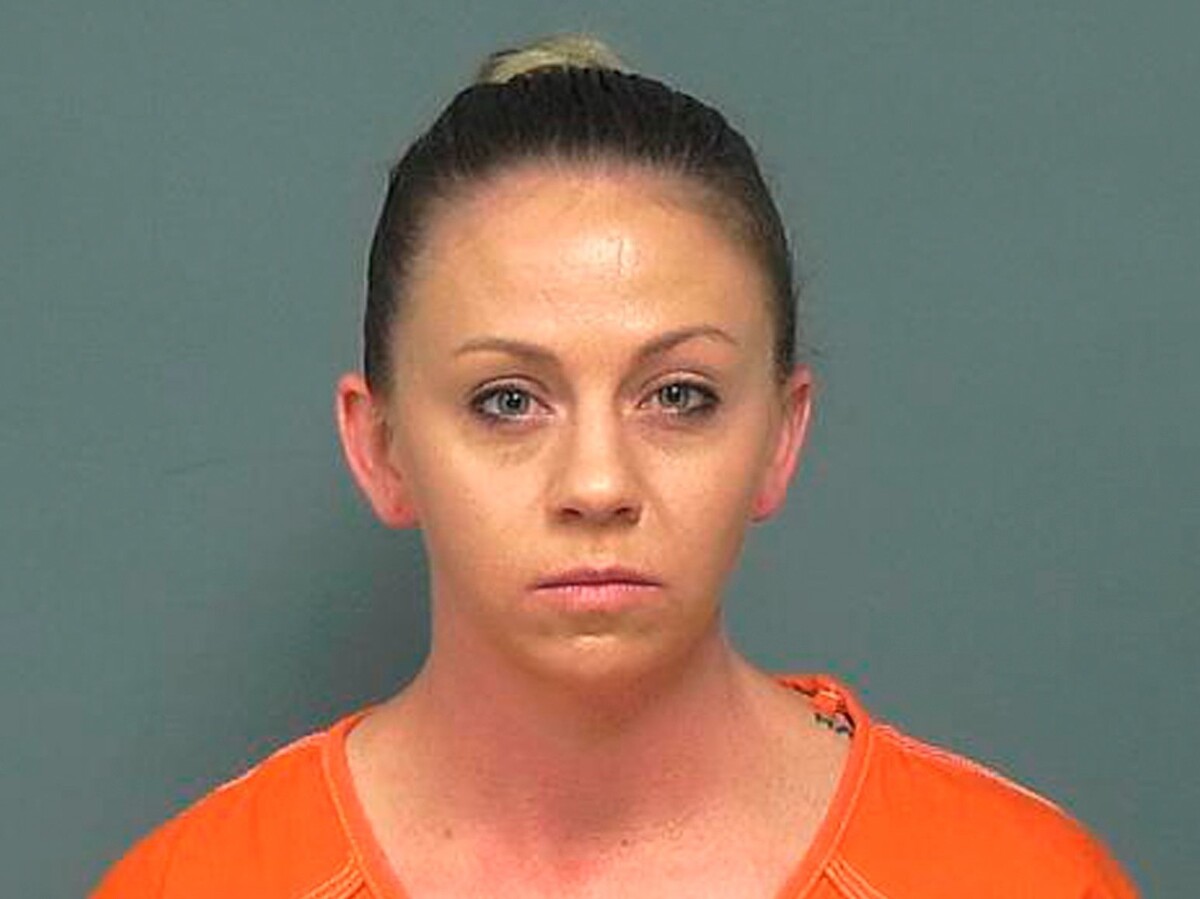 Amber Guyger, the former Dallas police officer who fatally shot an unarmed black man in his own home told a 911 dispatcher, "I thought it was my apartment" several times as she waited for emergency responders to arrive. Guyger is charged in the September, 2018 killing of Botham Jean.

A white former Dallas police officer who shot and killed her unarmed black neighbor in his apartment goes on trial in Dallas on Monday.

The former officer, Amber Guyger said she entered the wrong apartment thinking it was her own, and shot 26-year-old Botham Shem Jean because she thought he was a burglar.

Jury selection began earlier this month, one year to the date of the slaying of Jean, which happened on Sept. 6, 2018. Jean was an up-and-coming associate at PriceWaterhouseCoopers in Dallas and a native of the Caribbean island of St. Lucia.

Guyger, then an off-duty police officer and four-year veteran of the Dallas Police Department, was charged with manslaughter three days after the shooting. In November, she was indicted on a murder charge by a grand jury.

Guyger has admitted to the shooting but claims it was an accident. Her account of key events aren't expected to be disputed during the trial.

She has pleaded not guilty to murder.

Officer Arrested For Killing Man In His Apartment; Says She Thought It Was Her Home

According to Guyger, she was returning home from a double shift and mistakenly entered Jean's apartment after she parked on the fourth floor of her apartment complex, instead of the third floor where her apartment is located. She walked to the apartment on the fourth floor directly above her own. Guyger said she went to insert her electronic key and the door pushed open. She walked into the dark apartment and saw a man inside. Thinking he was an intruder, she fired twice and fatally shot Jean in the chest with her service weapon. Guyger said she only realized she was in the wrong apartment afterward when she turned on the light.

An unnamed law enforcement official with direct knowledge of the case told The Dallas Morning News that Guyger did not notice the bright red doormat that Jean had placed outside his door to help identify the apartment to visiting friends.

Over the course of the trial, the defense may argue that Guyger believed she was in a dangerous situation and thought she was acting in self-defense. On the other side, the prosecution may argue that Guyger has no legal standing for her actions since she was not on duty or responding to a dispatch call at the time of the shooting and that she was a civilian who broke into a private residence when she shot Jean.

The jury will need to decide if the killing of Jean was an accident or a murder. The other question the trial will likely address is whether the incident was racially motivated.

Civil Rights Attorney Benjamin Crump, one of the lawyers for the Jean family, has referred to the shooting as an example of the constant threat of a deadly violence that African Americans experience daily.

"The family has no doubt in their mind that she shot Botham because she saw a black man and she thought, 'criminal,' " Ben Crump, one of the attorneys for the Jean family, told NPR. 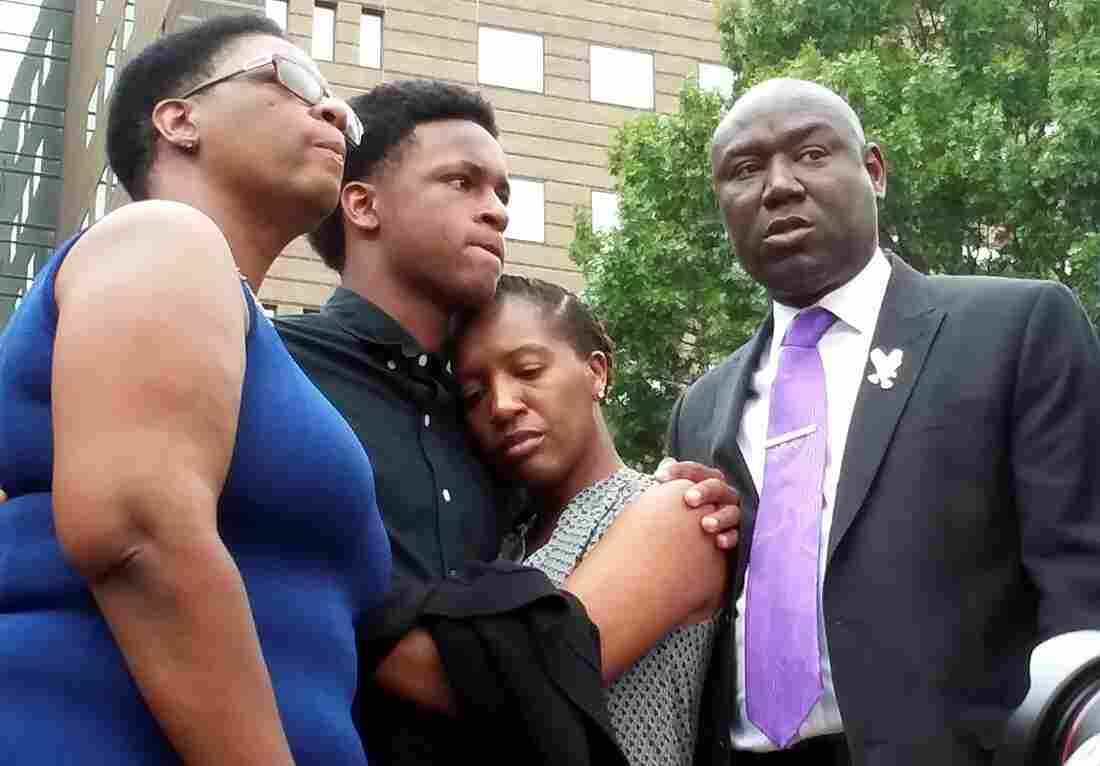 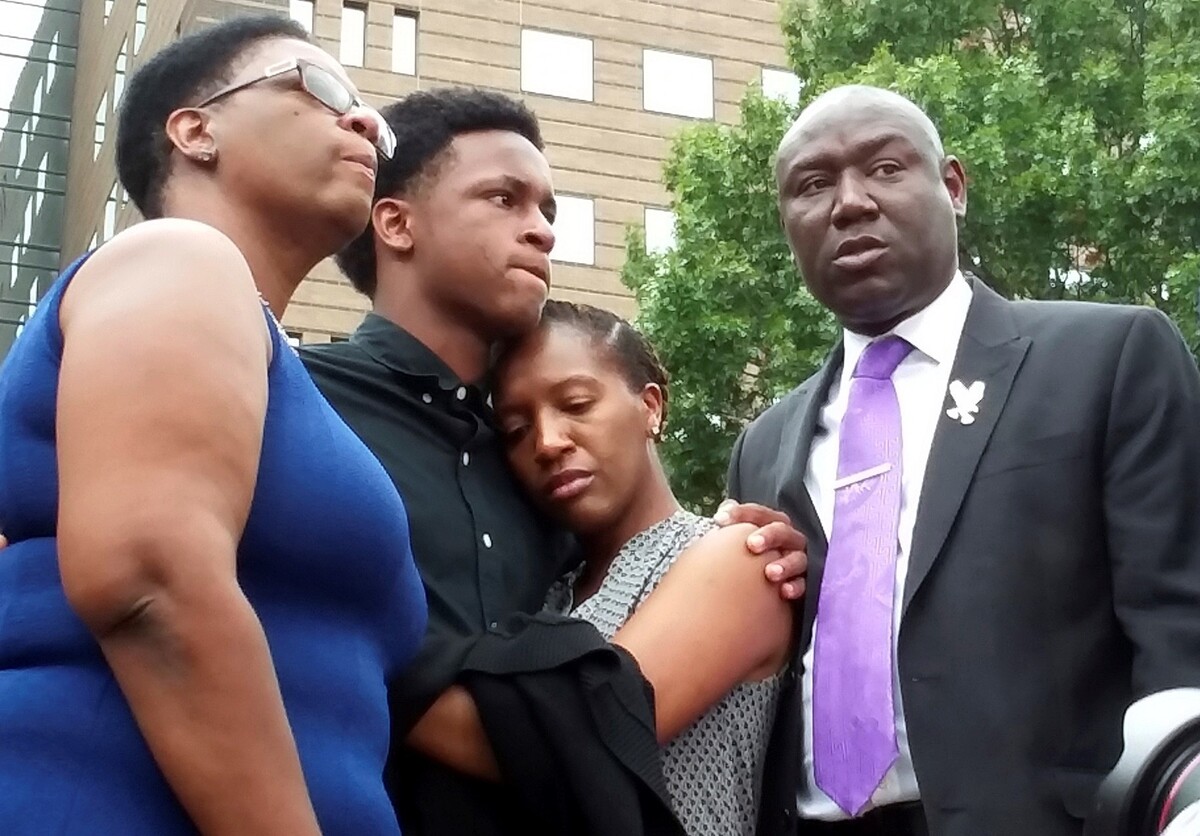 Brandt Jean, center left, brother of shooting victim Botham Jean, hugs his sister Allisa Charles-Findley, during a news conference outside the Frank Crowley Courts Building on Monday, Sept. 10, 2018, in Dallas, about the shooting of Botham Jean by Dallas police officer Amber Guyger on Thursday. He was joined by his mother, Allison Jean, left, and attorney Benjamin Crump, right.

Allison Jean, Botham's mother, told CNN that she believes that Guyger would have acted differently if Botham were white. She and her husband also filed a federal lawsuit against Guyger and the city of Dallas last October, alleging that the former officer used excessive force.

The civil case has been put on hold by a judge until the completion of the criminal case, according to Daryl K. Washington, another attorney for the Jean family.

The issue of race has hung over the case from its outset, when Guyger was not arrested on the night of the shooting. It angered the black community in Dallas and St. Lucia and raised questions as to whether Guyger was being given preferential treatment. Protesters took to the streets and chanted Botham's name. Tensions further increased when Guyger was not immediately terminated from the police force.

Three days after the shooting, Guyger turned herself over to police. She was booked, but posted bond and was released within an hour. Two weeks later, following an internal investigation and on the same day that Jean was buried in his home country of St. Lucia, she was fired from the Dallas Police Department on Sept. 24, 2018.

Jean's family has also accused the police department of conducting a biased investigation in the immediate aftermath of their son's death — a claim that activists have echoed as well. They argue that he was treated like a criminal rather than an innocent victim. It was also made public that marijuana was found in Jean's apartment, which was seen by some as an attempt to attack his reputation.

Jean was a leader in his local church and dedicated to local charity work. He hoped to someday return to St. Lucia and enter public service.

"My family and I have only been asking for a fair hearing for my son," Jean's mother, Allison, said at a press conference days after her son was killed. "My son's life matters. At 26-years-old, he had done so much. So if you extrapolate what he could have done had he reached my age, then you would have seen how much I lost."

The trial will take place at the Dallas County Courthouse on Riverfront Boulevard. Guyger's defense team requested that the trial be moved out of Dallas County to one of the city's whiter and more conservative suburbs, arguing that Guyger cannot receive a fair trial in Dallas because of "media hysteria" and public comments made by officials about the shooting.

Judge Tammy Kemp denied the motion for a change of venue.