Accessibility links
Bruce Springsteen At 70: Is He The One Thing We All Can Agree On? A Springsteen concert "created a civic space in which two antithetical sentiments could coexist and communicate with each other," writes A.O. Scott. The Boss turns 70 years old today.

The Ties That Bind: Bruce Springsteen And The Wide Divide

The Ties That Bind: Bruce Springsteen And The Wide Divide 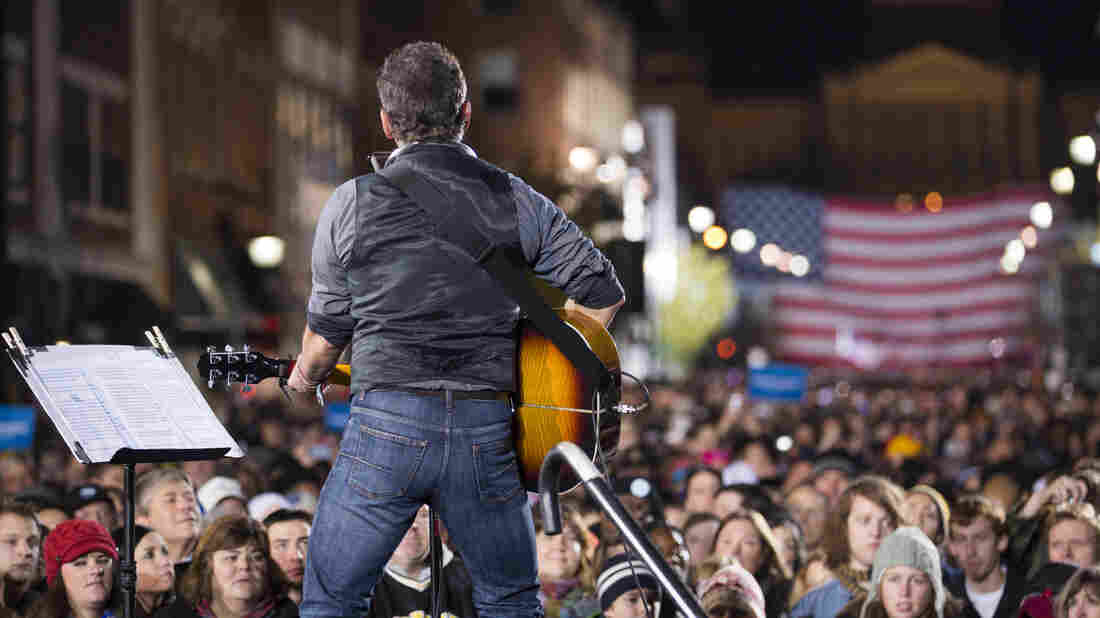 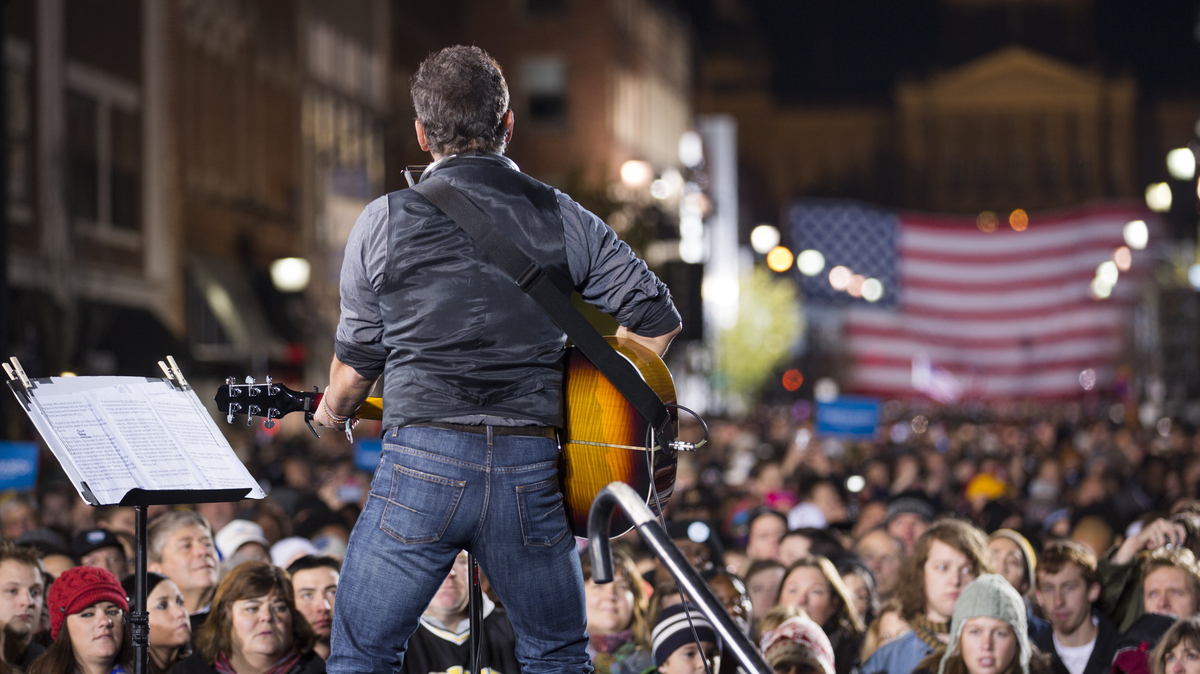 On February 4, 1999, on Wheeler Avenue in the Soundview section of the Bronx, Amadou Diallo, an immigrant from Guinea, was killed by four plainclothes members of the New York Police Department's Street Crimes Unit. Diallo, who was unarmed, was standing on the front stoop of the building where he lived and reaching for his wallet when the officers started shooting. They fired forty-one bullets, nineteen of which hit Diallo.

In response to the shooting, Bruce Springsteen released "American Skin (41 Shots)," a minor- key ballad, more anguished than angry, which applied the balms of empathy and narrative economy to a raw social wound. The central verse dramatizes what African American families call "the talk." As a mother, Lena, prepares her son, Charles, for school, she reminds him: "You've got to understand the rules / if an officer stops you, promise me, you'll always be polite / and that you'll never ever run away / and promise mama you'll keep your hands in sight."

The following summer, I managed to score seats up in the rafters of Madison Square Garden for one of the last shows in the E Street Band's epic reunion tour. A few rows ahead of me at that show, there were two guys [who] were bigger Bruce fans than I was, or at least fans of longer standing and purer pedigree.

But this isn't really about me. It's about those other guys, who I might not have noticed, and would never have remembered nearly twenty years after the fact, if not for what I'm about to describe. They looked a little older than I was: closer to forty than thirty. They were meatier, louder, probably drunker and having a great time — dancing, pumping their fists, exchanging high fives with strangers, singing along to every chorus and most of the verses. They were not self-conscious at all.

At least not until the first mournful notes of "American Skin." I don't remember if Bruce introduced it or if anyone needed reminding. The officers had been acquitted four months earlier, in February 2000. Diallo's mother, Kadijatou, had filed a suit against the city in April. Maybe he said something about that, or maybe everyone remembered when he sang the line "forty-one shots." As soon as he did, the two men turned their backs to the stage, clasped their hands in front of them and bowed their heads. They didn't boo and they didn't walk out but stood silently, registering their protest at the Boss's protest. 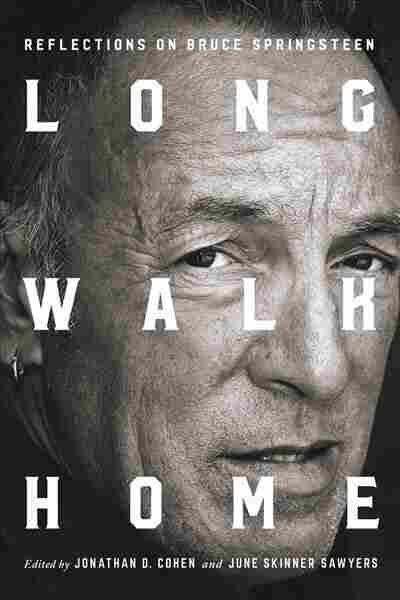 Once the final chorus began to fade, he shifted — without pausing for breath — into the familiar harmonica riff that leads into the first verse of "The Promised Land." Having made their point and enacted their displeasure, the two guys turned back to face the music, and when Bruce stopped singing after the first chorus and turned the microphone toward the crowd, they sang along with everyone else, belting out a stanza that expressed a different kind of protest: "Sometimes I feel so weak, I just wanna explode."

For a long time I held onto that moment as a complicated symbol of civic promise, a testament to the inclusiveness of popular music in general and Bruce Springsteen in particular. Of course he didn't have the power to fix racism, to resolve the contradictions of class and ideology, to move the world toward justice. But the reach of his empathy was wide enough to extend to both Amadou Diallo's family and, if not to his killers, surely to their families and supporters. The politics that would take any criticism of the police as a moral provocation, while far from Springsteen's own beliefs, is in no way alien to his imagination. He might not have agreed with those guys standing with their backs turned but he understood them. And their understanding of him was what authorized their protest. The concert created a civic space in which two antithetical sentiments could coexist and communicate with each other. Feelings might be hurt, but the bond between performer and fan was stronger than politics.

The Limits Of Loving The Boss

Something like this idea defined the public career of Barack Obama, in some ways the most Springsteenian political figure in American political history. The speech at the 2004 Democratic National Convention that set Obama on course to capture the presidency wove a shimmering dialectic of unity and diversity. Obama rewrote historical conflict — about race, power, money, religion, and culture — as common struggle. He tried to insist in particular that America's racial wounds could be salved by the mutual recognition of good will, by appreciation of the varieties of American skin we all inhabit.

"Is a dream a lie if it don't come true?" As I write this, Obama's liberal ideals have fallen on hard times. Maybe they were illusions to begin with, each fatally underestimating the depth and jaggedness of the fissures, the intensity of the fury, the tenacity of the tribal ties that bind. And maybe too, some of us invested too much faith in the charisma of our leaders, and rested too comfortably in the conviction of our own goodness.

Or maybe we were listening wrong, missing the overtones of irony, the notes of tragedy, longing, and defeat that sounded through even the most ringing and rousing choruses. The liberal Springsteen has been a comforting fantasy, but the radical Springsteen — the poet of work, violence, futility, and all-in existential revolt — needs to be recovered, just as we are being forced to recall that the character of our common civic life has always been a matter of life and death. "You can get killed just for living in your American skin."

This is an edited excerpt of a longer work taken from Long Walk Home: Reflections on Bruce Springsteen, a collection of essays from Rutgers University Press examining the artist, now in his 71st year, and his career.