Accessibility links
Ann Patchett's 'The Dutch House,' Reviewed Patchett's new novel is a story of paradise lost, dusted with fairy tale. It follows two siblings who bond after their mother leaves the family home — an ornate mansion she always hated. 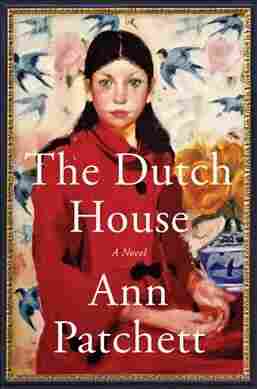 Ann Patchett may well be the most beloved book person in America — not just for her irresistibly absorbing novels and memoirs (including The Patron Saint of Liars, Bel Canto and This Is the Story of a Happy Marriage) but for becoming a patron saint of readers and publishers when she opened Parnassus Books in her hometown of Nashville, Tenn. And despite a few small reservations, this is the story of a happy book critic: The Dutch House is another wonderful read by an author who embodies compassion.

Patchett's eighth novel is a paradise lost tale dusted with a sprinkling of Cinderella, The Little Princess and Hansel and Gretel. Two siblings, Maeve and Danny Conroy, bond tightly after their mother leaves home when they're 10 and 3. Home is the eponymous Dutch House, a 1922 mansion outside Philadelphia that their father, Cyril, a real estate mogul, bought fully furnished in an estate sale as a surprise for his wife in 1946, when Maeve was 5. The house, built by a Dutch couple who made their fortune in cigarettes, is grand, with an ornate dining room ceiling, six bedrooms on the second floor, and a ballroom on the third floor. His wife, Elna, hates it, aesthetically and ethically. After she flees, ostensibly to India to devote herself to the poor, her family suffers, as if "they had all become characters in the worst part of a fairy tale," Patchett writes.

The Dutch House is, in part, about real estate lust. "The only thing our father really cared about in life was his work: the buildings he built and owned and rented out," Danny writes with a surprising lack of bitterness. "He loved buildings the way boys loved dogs," he adds later, an observation equally applicable to himself.

Patchett's eighth novel is a paradise lost tale dusted with a sprinkling of 'Cinderella,' 'The Little Princess' and 'Hansel and Gretel.'

Andrea, a pretty young widow 18 years Cyril's junior, falls in love with his house and then finagles her way into it with her two small daughters. She certainly doesn't fall in love with Cyril's two children. The wicked stepmother's arrival, even more than their mother's ghosting, marks the end of Danny and Maeve's childhood. Their expulsion from paradise becomes quite literal a few years later; in classic fairy tale fashion, Cyril is putty in his second wife's hands.

Rare among Patchett's fiction, The Dutch House is written in the first person, from Danny's adult point of view. Because Danny is by design a clueless, tight-lipped character, it isn't clear that this was the right choice; an omniscient third person narration might have been a better way to get deeper inside him. Many of the details about his eccentric upbringing come courtesy of his older sister, a much more interesting character. But eventually Danny comes to realize how much he's missed along the way, including the fact that the Conroys' two loyal housekeepers are sisters. "The problem, I wanted to say, was that I was asleep to the world. Even in my own house I had no idea what was going on," he comments.

Like memory, Danny's narrative jumps around in time, fast-forwarding to medical school, which he attends only on Maeve's insistence, and his marriage, to which Maeve objects. Periodically, he scrolls back to his boyhood, tracing his intangible inheritances, which include his reticence and the real estate bug he caught from his father.

The Dutch House is also about obsessive nostalgia. Whenever Danny returns to Pennsylvania to visit Maeve, the two park across the street from their former home to mull over what happened to them: "like swallows, like salmon, we were the helpless captives of our migratory patterns. We pretended that what we had lost was the house, not our mother, not our father." Danny adds later, "We had made a fetish out of our misfortune, fallen in love with it."

On one of these visits Danny asks, "Do you think it's possible to ever see the past as it actually was?" Maeve insists she does just that. "But we overlay the present onto the past," Danny objects, a statement that highlights the trickiness of retrospective personal histories, including the one we're reading. "We look back through the lens of what we know now, so we're not seeing it as the people we were, we're seeing it as the people we are, and that means the past has been radically altered."

Patchett's previous novel, Commonwealth (2016), was her most autobiographical, and it also involved blended families and children left too much to their own devices. The Dutch House belongs to a tradition in both fairy tales and American fiction of motherless children (sometimes raised by their father, often with the aid of an aunt or trusty hired help) — books that include Harper Lee's To Kill a Mockingbird and Mark Twain's The Adventures of Huckleberry Finn.

Patchett's concern here, as in much of her fiction, is with the often unconventional families we cobble together with what's available to us. Being Patchett, she brings her novel around to themes of gratitude, compassion and forgiveness. The Dutch House goes unabashedly sentimental, but chances are, you won't want to put down this engrossing, warmhearted book even after you've read the last page.