Accessibility links
Emmys Recap: 'Game Of Thrones,' 'Fleabag' And Billy Porter Have Big Nights Phoebe Waller-Bridge's Fleabag and the departing Game of Thrones both came up big Sunday night, as did Chernobyl and The Marvelous Mrs. Maisel.

'Fleabag' And 'Game Of Thrones' Win Big At The Emmys

'Fleabag' And 'Game Of Thrones' Win Big At The Emmys 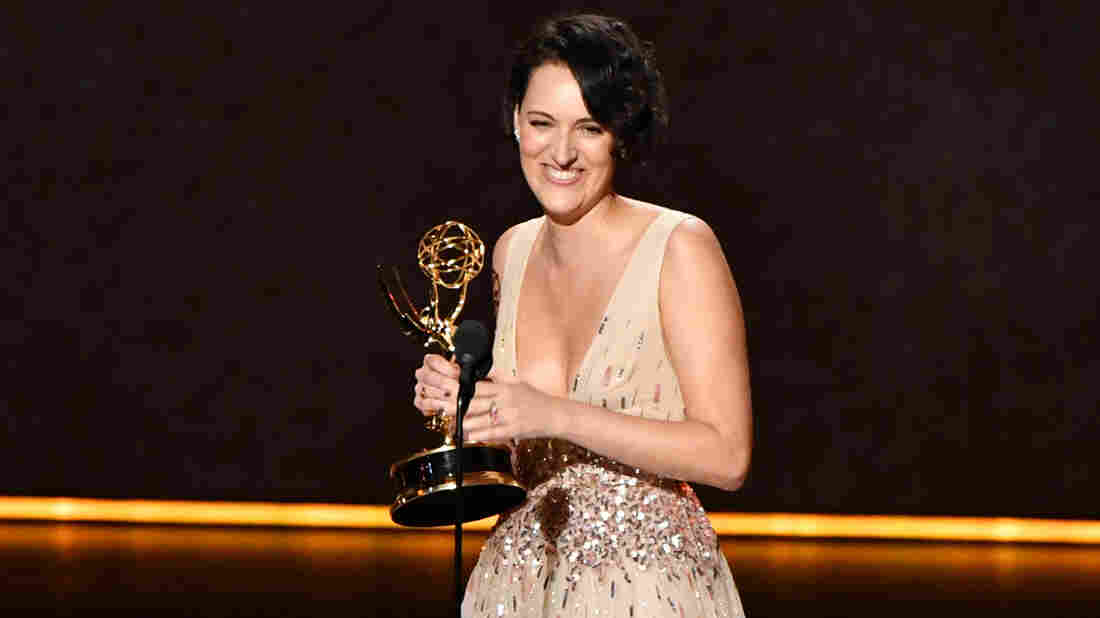 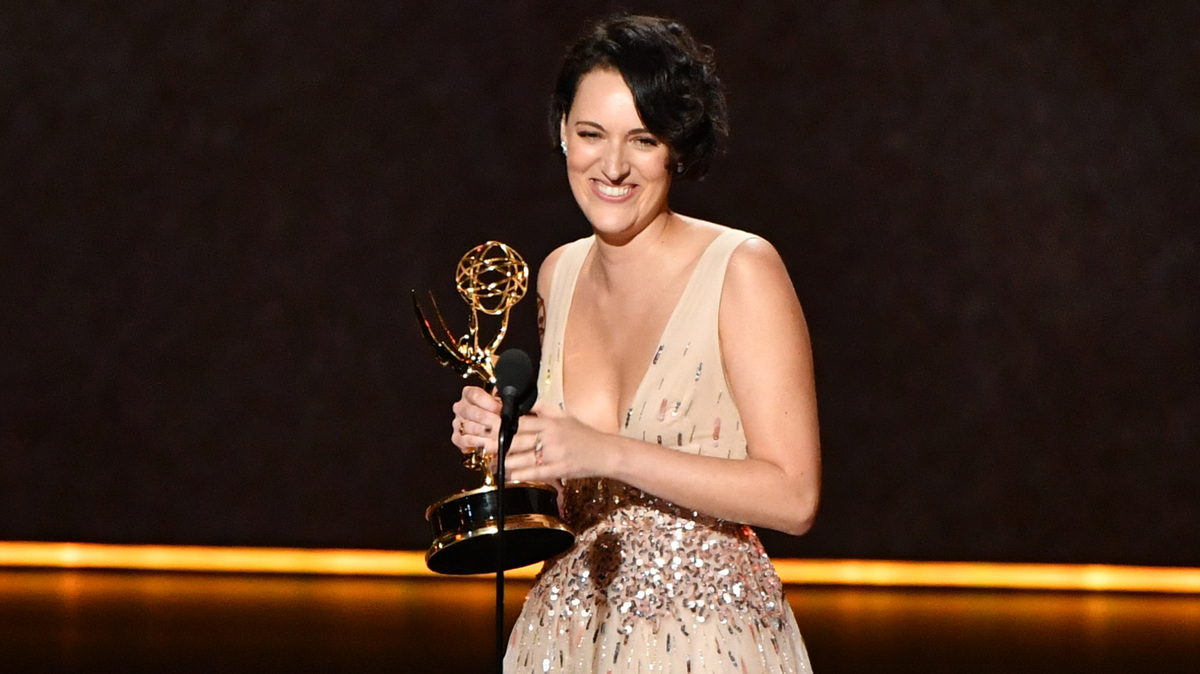 If you predicted that creator-actor Phoebe Waller-Bridge would be a big winner going into Sunday night's Emmy Awards, you might just have won your Emmys pool. And if you were predicting a giant final haul of Game of Thrones trophies as that show leaves us for good, you were, well, sort of right.

These Emmys started as many do, with a limp opening number that — now that "not having a host" is the new "having a host" — wandered from Homer Simpson to Anthony Anderson to Bryan Cranston, who offered a staid salute to television and the moon landing, and then to the general goodness of TV These Days. Not to complain, but ... we could always go back to having a good host.

Comedy was up first. Ben Stiller did a wax-figure bit with Bob Newhart, who was, of course, not a wax figure. And honestly, for an awards show bit, it was pretty funny! They presented the stacked category of supporting actor in a comedy series: The nominees were Tony Shalhoub for The Marvelous Mrs. Maisel, Henry Winkler and Stephen Root and Anthony Carrigan for Barry, Alan Arkin for The Kominsky Method and Tony Hale for Veep. Shalhoub won, but that is a commanding group. Amy Poehler and Catherine O'Hara, an imposing duo indeed, presented the supporting actress in a comedy series award to Alex Borstein, also from Maisel, despite another stacked category. For a moment, it began to look like another 2018, when Maisel won eight awards, including outstanding comedy series.

But just as that suspicion began to set in, they gave the comedy series writing award to Waller-Bridge for Fleabag, which completed its two-season story this year with a nearly perfect second set of episodes (on Amazon Prime, if you still haven't watched it). The directing prize went to Harry Bradbeer, also for Fleabag, which meant, among other things, that Amazon had won the first four prizes of the night.

HBO roared back when Bill Hader won lead actor for Barry, his series in which he plays a hit man. Could HBO keep it up? It could not, because when Hader was through, we went right back to Phoebe Waller-Bridge. Sometimes more recognized as a writer than a performer (she also created Killing Eve), Waller-Bridge beat actresses like Julia Louis-Dreyfus, the legendary Catherine O'Hara, and fabulous performances in new series by Christina Applegate and Natasha Lyonne — not to mention Rachel Brosnahan, who won last year for Maisel. It never seemed certain that the Academy would embrace something as idiosyncratic as Fleabag; what a delight to see that it did.

A moment for reality

While most of the reality awards have been shipped off to the Creative Arts ceremony that took place a week ago, the reality competition show stayed to represent the entire genre, and this year, it went to RuPaul's Drag Race. RuPaul got up onstage and told everyone to go and register to vote, the first time we'd hear a (very mild) nod to current events.

Before the limited series and movie awards started, there was a very special moment of ... gratitude? ... for the existence of HBO's Game of Thrones, during which the cast came onstage and recited lines about what a great time they had. Had there been a whole bunch of tributes to concluded shows, it might have seemed like a more graceful element of the broadcast. But bringing the entire show to a halt to salute Game of Thrones — a show still in competition in these very awards — felt, for lack of a better word, weird. After all, the way a show normally wins a chunk of attention is by winning awards, and many, many wonderful shows have never been recognized at all. Game of Thrones has been honored a great deal at the Emmys and its ending was covered extensively in the press and it got high ratings. Why, exactly, does it need a special moment of appreciation? How are we deciding who gets this little tribute? Why not a special tribute for shows like Jane the Virgin that were never Emmy favorites?

When we did finally get around to giving out more awards, Patricia Arquette won for supporting actress in a limited series for Hulu's The Act, based on the true story of a mother and daughter. Arquette devoted most of her speech to the pain of losing her sister Alexis and to a stirring call to treat trans people better.

In further limited-series news, Johan Renck won for directing Chernobyl for HBO, Ben Whishaw won supporting actor for Amazon's A Very English Scandal (beating, among others, three actors from Ava DuVernay's When They See Us on Netflix; they may have suffered from some vote-splitting), and Craig Mazin won for writing the highly regarded Chernobyl. Next up was the moment for When They See Us, though, when Jharrel Jerome won best lead actor in a limited series for playing Korey Wise, one of the five men who were ultimately exonerated after spending years incarcerated for an assault in Central Park. Jerome, the only actor in the piece who played his character both as an adolescent at the time of the arrest and as an adult at the time of his exoneration, got one of the most excited reactions of the evening.

The award for best TV movie, a category that doesn't get nearly the heat it used to, went to Bandersnatch, Netflix's weird, uneven experiment in interactive storytelling. Among other nominees, it beat the movie that wrapped up HBO's Deadwood years after it originally ended — perhaps a fitting legacy for a show that was denied major awards for its entire run.

Before they wrapped up the limited series/movie awards, there was a Veep tribute similar to the Game of Thrones tribute, and well, once again, there have been a lot of opportunities to salute this show, including a string of Emmys for star Julia Louis-Dreyfus. The cast, being naturally funny, did more with the onstage time than the Game of Thrones cast did, but ... the way you recognize shows on an awards show is with awards. If you don't have enough to do, move some awards back from Creative Arts. Or just make the show shorter. Nobody will mind. You've got to believe me.

The lead actress in a limited series or movie was Michelle Williams for her indelible work as Gwen Verdon in FX's Fosse/Verdon. Williams, who gave that series most of its finest moments, made a stirring speech in which she told the story of having been supported in the things she asked for — more dance lessons, a better wig, better fake teeth — and having been paid equally. She called out the particularly low pay that goes to women of color, and said that valuing people leads them to put that value back into their work.

The Emmy for outstanding limited series went to Chernobyl, and there's a good argument to be made that that award, while it's in the middle of the show rather than at the end, is as prestigious as any. Limited series are the home of a lot of the most interesting work that's happening at any given moment.

When you think about it, "Variety" is an inappropriate name for the variety category. You know how you can tell? The award for variety series writing went to the writers from Last Week Tonight With John Oliver, which has been winning and winning, and the award for outstanding sketch series went to the young upstart known as Saturday Night Live, which also took the directing award. Not to take anything away from these winners that have won a billion awards already, but if you haven't yet watched Documentary Now!, which was nominated in the sketch category and didn't win, I encourage you to track it down immediately. It was fun, we must admit, to see Billy Porter, wearing perhaps the best hat of the year, present the award for best variety talk series to Last Week Tonight With John Oliver, even if it was for the fourth straight time.

For whatever reason, variety category winners tend to win for 11 years in a row or what have you, or they never win at all. Variety, indeed.

And then it was time for some drama.

Viola Davis came out in some genuinely great sneakers (comfort is important!) to present the award for supporting actor in a drama series. Unsurprisingly, it went to Peter Dinklage, who won for the fourth time for Game of Thrones.

In fresher news, Jesse Armstrong won for drama series writing, for HBO's exceptional Succession, which seems destined to one day win for drama series, even if it was not to be this year. The supporting actress Emmy was nabbed by another actor from a somewhat lower-profile show: Julia Garner for Ozark, a Netflix drama that has maintained a solid awards profile and has an enthusiastic following but more modest critical attention. Ozark also won Jason Bateman, its star, an Emmy for directing. (Raise your hand if you called that one back when he was on Silver Spoons.)

Some awards just seem like good news all around, and the next one to be handed out fit that bill: The award for lead actor in a drama series went to the wonderful Billy Porter for Pose, and if you didn't feel good about anything else that happened at this ceremony, how could you not feel good about that? And then Billy Porter was followed by a win for Jodie Comer, who plays the wicked Villanelle on Killing Eve; she won for lead actress in a drama series. So that's two winning roles — on Killing Eve and Fleabag — that were developed by the same creator, Phoebe Waller-Bridge.

It wasn't over yet.

Fleabag's night — and its Emmy run — concluded with a comedy series win for this unusual, beautiful, very funny show that probably could not have existed in quite this way even 10 years ago. This was the part of the evening where things felt surprising.

Best drama series went to Game of Thrones — which, it turns out, did not need to have been given a tribute in the middle of the broadcast as if it were an adorable hero dog that saved someone from drowning, on top of winning the top award of them all ... again. This was the part where things felt unsurprising.

This is the Emmys, in a nutshell: You win some — or the people whose work you like win some — and you lose some. But if you grew up watching this show turn its nose up at almost everything that felt new or fresh or experimental, seeing Billy Porter and Phoebe Waller-Bridge and Jodie Comer and Bill Hader winning Emmys for these roles? It's not bad.