Accessibility links
VIDEO: 'This Is All Wrong,' Greta Thunberg Tells World Leaders At U.N. Session "This is all wrong. I shouldn't be up here. I should be back in school, on the other side of the ocean," activist Greta Thunberg tells leaders at a U.N. climate conference.

Greta Thunberg has a message for world leaders at the United Nations this week: "We'll be watching you." Speaking at the Climate Action Summit in New York, Thunberg added, "This is all wrong. I shouldn't be up here. I should be back in school, on the other side of the ocean."

But instead, Thunberg, 16, is trying to convince politicians to take climate change seriously, and to do something to stop a global warming trend that will affect the world's children more than it affects anyone who's currently in power.

In an impassioned speech, Thunberg told those who hold office, "you all come to us young people for hope. How dare you? You have stolen my dreams and my childhood with your empty words, and yet I'm one of the lucky ones. People are suffering. People are dying. Entire ecosystems are collapsing."

Saying that the world is now in the early stages of a mass extinction, Thunberg criticized those who still speak of the crisis in terms of money and economic growth.

"How dare you?" she asked again, growing increasingly emotional as the audience cheered at the 2019 Climate Action Summit.

Citing more than 30 years' worth of scientific studies and warnings that greenhouse gases and other factors were establishing a dangerous new environmental trend, Thunberg criticized politicians for not developing solutions and strategies to confront that threat. 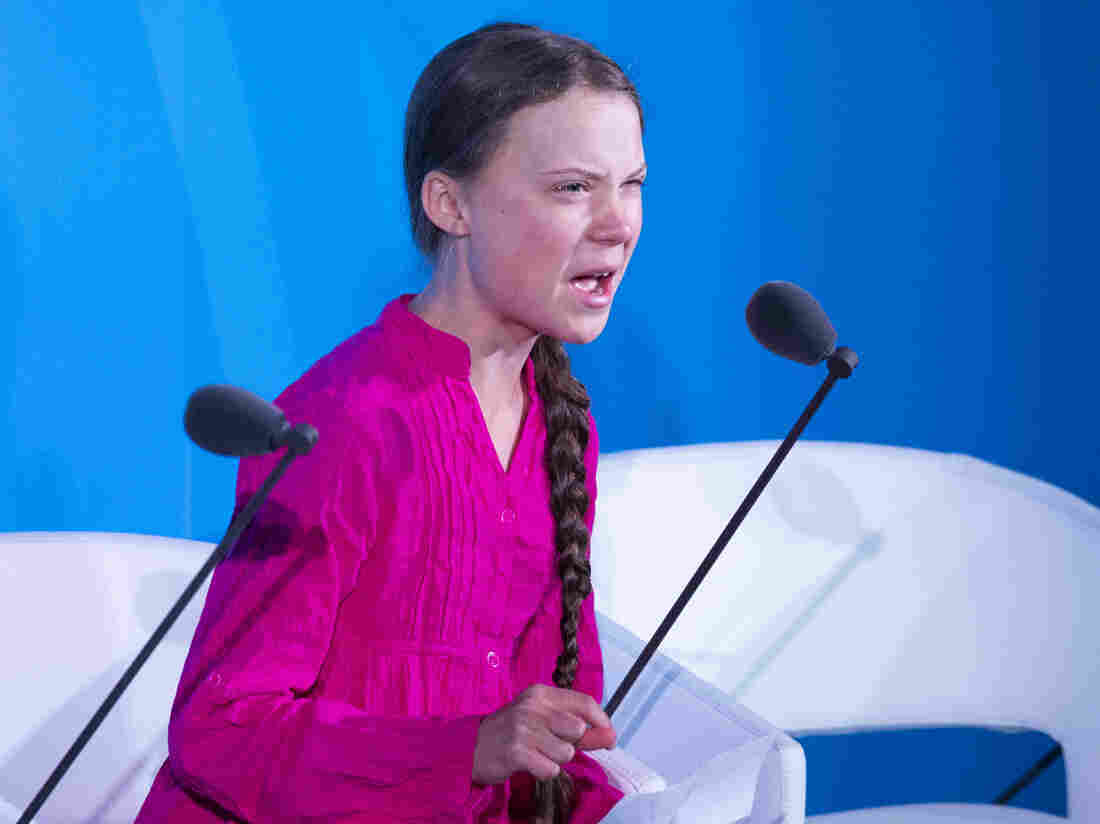 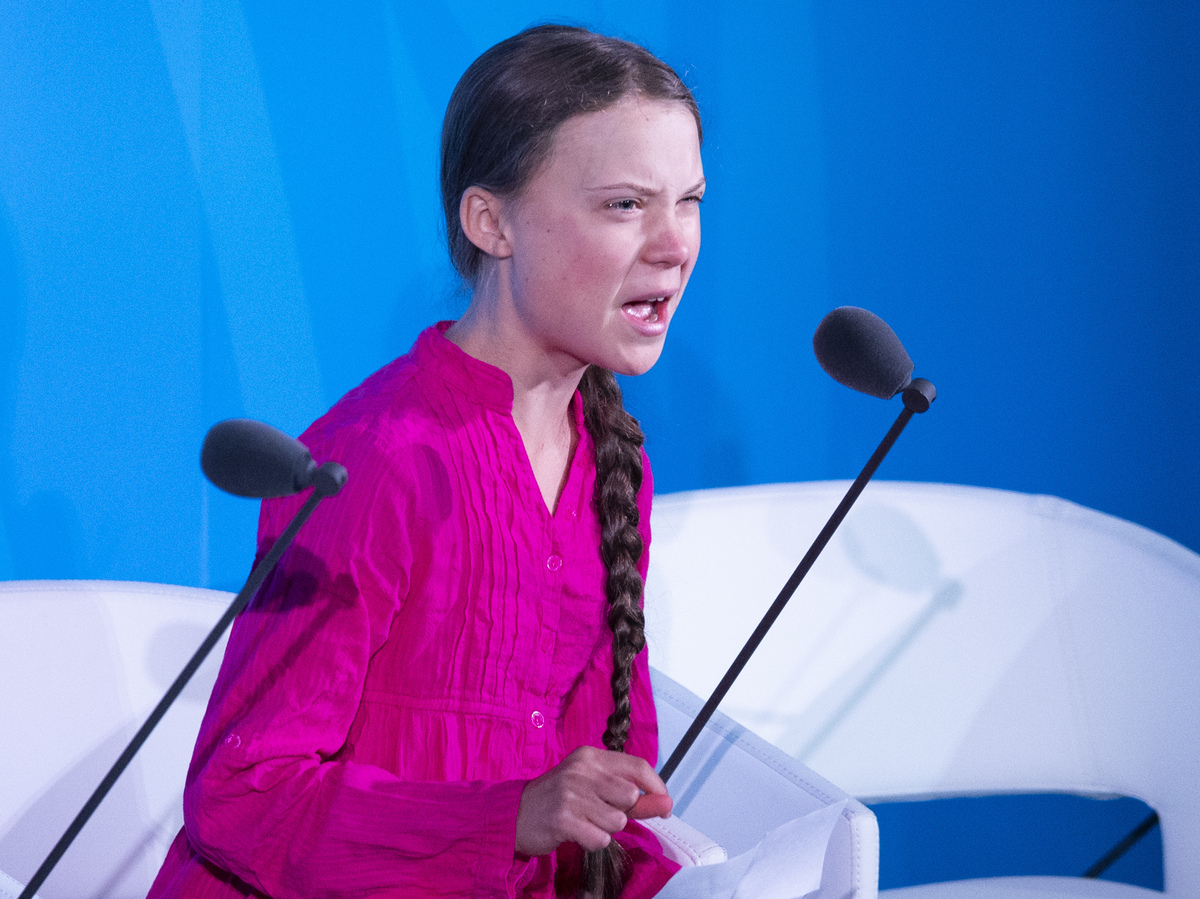 "You say you hear us and that you understand the urgency. But no matter how sad and angry I am, I do not want to believe that. Because if you really understood the situation and still kept on failing to act, then you would be evil. And that I refuse to believe."

Thunberg then drilled into one aspect of a current international plan, which includes the goal of cutting current emissions levels in half over the next 10 years.

But that plan, she said, only provides a 50% chance of keeping the warming trend below 1.5 degrees Celsius.

"Fifty percent may be acceptable to you," Thunberg said, before listing the many assumptions that underlie the estimate and the challenges that could thwart success.

"They also rely on my generation sucking hundreds of billions of tons of your CO2 out of the air with technologies that barely exist. So, a 50% risk is simply not acceptable to us — we who have to live with the consequences."

Thunberg's speech at a U.N. climate conference last December continues to draw viewers, captured by her direct tone and the clarity of her analysis of a complicated issue. For Monday's speech in New York, the Swedish activist shared the stage with U.N. Secretary-General António Guterres, who praised the youth movement for raising awareness for climate action.

In her remarks, Thunberg accused politicians of pretending that the world's dire climate problems can be solved with technical solutions and "business as usual."

To back up her point, she cited a report by the Intergovernmental Panel on Climate Change, which concluded that for the world to preserve its best chance of meeting the 1.5-degree goal, countries had a "total carbon budget" of 420 gigatons of CO2 at the start of 2018 — meaning that together, countries shouldn't exceed that amount.

"Today, that figure is already down to less than 350 gigatons," Thunberg said, adding that at current emission rates, the carbon budget laid out by the IPCC "will be entirely gone in less than eight and a half years."

Thunberg added, "There will not be any solutions or plans presented in line with these figures here today, because these numbers are too uncomfortable and you are still not mature enough to tell it like it is."

To those wielding power, the activist said, "You are failing us, but young people are starting to understand your betrayal. The eyes of all future generations are upon you. And if you choose to fail us, I say: We will never forgive you."

"We will not let you get away with this," she added. "Right here, right now is where we draw the line."

Thunberg concluded her remarks by saying, "The world is waking up. And change is coming, whether you like it or not."

In a sign of her growing prominence, Thunberg's remarks at the climate summit immediately preceded speeches from leaders such as Pope Francis and New Zealand's Jacinda Ardern.

President Trump made a surprise visit to the same auditorium where Thunberg spoke — but the U.S. president arrived shortly after she concluded her remarks, entering while India's Prime Minister Narendra Modi spoke.

Shortly after the speech, Thunberg and other young people filed a legal complaint against five countries, saying their role in climate change has violated a widely ratified U.N. pact on children's human rights.

"I and 15 other children from around the world filed a legal complaint against 5 nations over the climate crisis through the U.N. Convention on the Rights of the Child," Thunberg said via Twitter. "These 5 nations are the largest emitters that have ratified the convention."

Those countries are France, Germany, Brazil, Argentina and Turkey; they are accused of not curbing emissions and promoting fossil fuels, despite being well aware of the risks of climate change. Unlike most other signatories to the convention, the five countries have also approved a procedure for receiving complaints about potential violations.

The U.S. has signed the U.N. treaty, but it has never ratified it. When Somalia and South Sudan ratified the convention in 2015, that left the U.S. alone in not being a party to the human rights agreement.

The young activists announced their complaint at a press conference at UNICEF Headquarters in New York — right across the street from the U.N. building where Thunberg spoke earlier.

The minors are from 8-17 years old and come from 12 different countries. They include Alexandria Villaseñor, 14, of New York City, who said the countries that endorsed the Right of the Child convention had entered into a contract when they pledged to "leave a world worth inheriting" for future generations.

"You are defaulting on that contract, and we're here to collect," Villaseñor said.

Although UNICEF hosted the news conference, it isn't involved in the complaint. Instead, it's being handled by the Washington-based Hausfeld law firm and the group Earthjustice.