Accessibility links
Trump, Biden And Ukraine — What Happened And What's Next? In a fight to frame the political conflict, President Trump alleges former Vice President Joe Biden and his son are "corrupt." Opponents point to the president's own phone call. 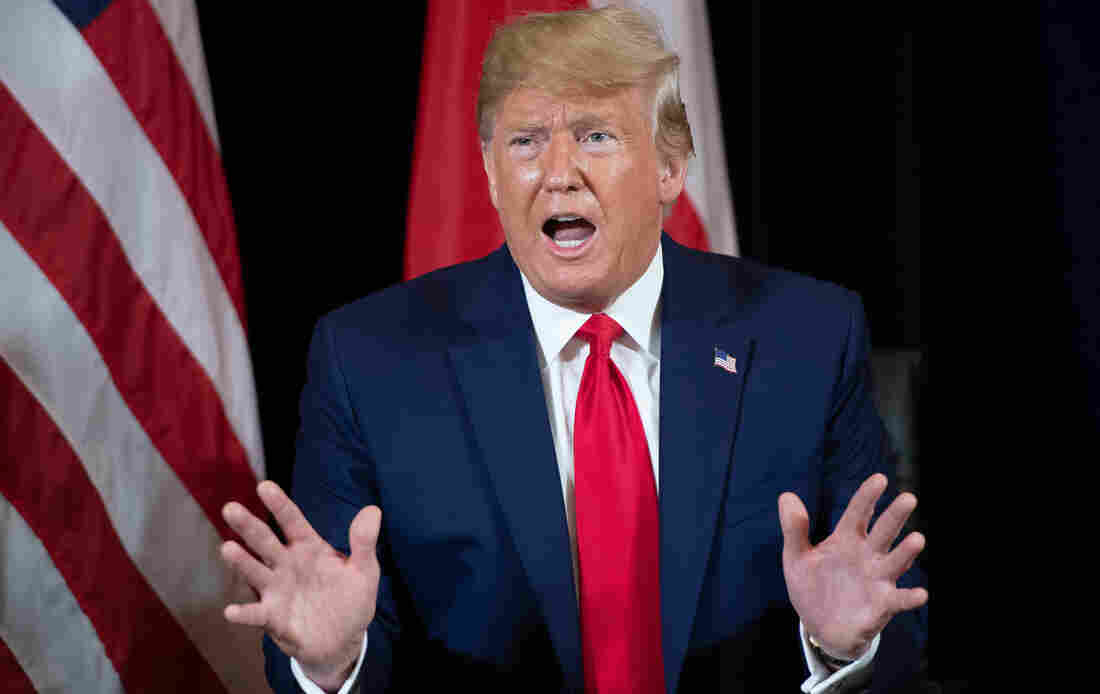 President Trump speaks during a meeting with the Polish president on the sidelines of the U.N. General Assembly in New York on Monday. After the meeting, Trump alleged that former Vice President Joe Biden and his son, Hunter, are "corrupt." Saul Loeb/AFP/Getty Images hide caption 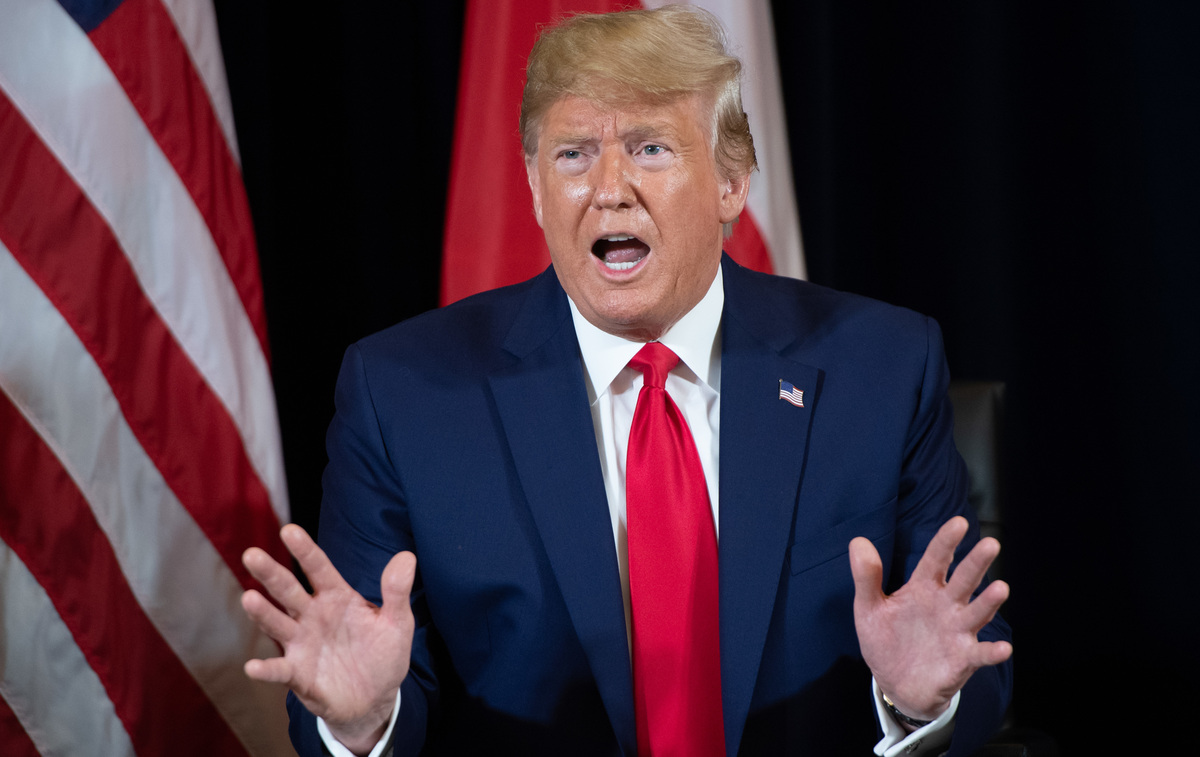 President Trump speaks during a meeting with the Polish president on the sidelines of the U.N. General Assembly in New York on Monday. After the meeting, Trump alleged that former Vice President Joe Biden and his son, Hunter, are "corrupt."

President Trump and his opponents jockeyed for advantage on Monday as Washington girded for a drawn-out conflict over the White House and Ukraine.

Trump and his aides sought to throw the spotlight on former Vice President Joe Biden and his son, Hunter, who they said might be connected with what they called "corruption" in Ukraine — although Biden's camp insists those allegations have been debunked.

Democrats, meanwhile, blasted the White House over its conversations with Ukrainian leaders — conversations that may have sought political dirt on the Bidens for use in the U.S. presidential election. That's not only inappropriate but potentially impeachable, they said, raising the temperature within a party already divided over how or whether to try to hold Trump accountable.

"If the president asked or pressured Ukraine's president to investigate his political rival, either directly or through his personal attorney, it would be troubling in the extreme. Critical for the facts to come out," wrote Sen. Mitt Romney, R-Utah, on Twitter.

If the President asked or pressured Ukraine’s president to investigate his political rival, either directly or through his personal attorney, it would be troubling in the extreme. Critical for the facts to come out.

Texas Democratic Rep. Vicente Gonzalez, who had not previously supported impeachment, shifted his position when pressed by CNN on Monday about reports that the president pushed a foreign leader to find damaging information on his opponent.

"I don't think we have a choice," he said. "Under the Constitution, we must move forward with impeachment proceedings. I don't think we'll have much of a choice."

On Ukraine Call, Biden Says Trump Is 'Violating Every Basic Norm Of A President'

One question is whether Maguire will give lawmakers a copy of a complaint filed by a whistleblower within the intelligence community about Trump's conversation with a foreign leader.

If the complaint is revealed and it pertains to Trump's talks with Ukraine — or if members of Congress learn something else that changes the dynamics of this story — the next question is what that may mean for the positions taken by Romney and others about how Congress should respond.

If the outlines of the story are coming into focus, however, the details are still far from clear.

Trump has acknowledged that he spoke with Ukrainian President Volodymyr Zelenskiy about Biden, but Trump also says his conversation was aboveboard.

And an attorney for Trump, Rudy Giuliani, says he too has been talking with Ukrainian officials. But Giuliani says Trump didn't threaten to curtail military aid flowing to Kyiv unless Zelenskiy ginned up political ammunition against the Bidens.

What Giuliani did tell Fox News on Sunday was that "Biden's family has been taking money from his public office for years."

Secretary of State Mike Pompeo, who also appeared on Fox News, said he hopes the government can "get to the bottom" of whether there was any "wrongdoing" by Biden in Ukraine.

Trump held up aid to Ukraine from the summer until this month, following years of U.S. support prompted by Russia's invasion in 2014.

But it isn't clear whether a transcript of the president's phone call or other material might connect the assistance to Ukraine with the Biden discussions.

Trump hasn't ruled out releasing a transcript of his conversation with Zelenskiy or permitting Giuliani to appear before Congress, although it wasn't clear when or if either might happen.

So release the transcript of the call then. https://t.co/pWD7xmVLQO

In remarks at the United Nations General Assembly on Monday, Trump alluded to "corruption" in Ukraine in one gaggle with reporters and later said that what he called Biden's transgressions had been serious.

The president turned up the volume later in the day after a meeting with Polish President Andrzej Duda.

Meanwhile in Washington on Monday, Democrats said they are willing to issue subpoenas to get more information about the White House's talks with the leadership of Ukraine.

"Due to the urgent and grave nature of these allegations, our committees will have no choice but to move towards compulsory process this week unless the department produces the documents we have requested," the House chairmen wrote.

Dispute within the Senate

Earlier in the day, Minority Leader Chuck Schumer, D-N.Y., called for a similar effort in the Senate.

Schumer demanded that majority Republicans convene hearings with Maguire, Pompeo and other officials, subpoena the whistleblower complaint and demand the relevant legal opinions in this case from the Justice Department. 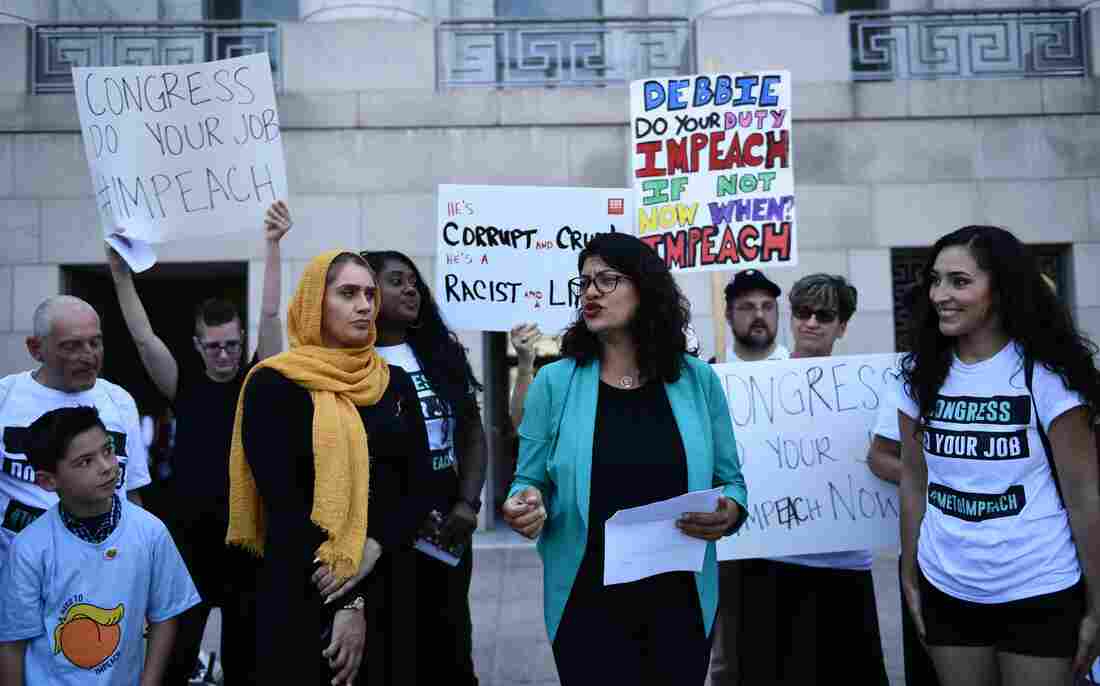 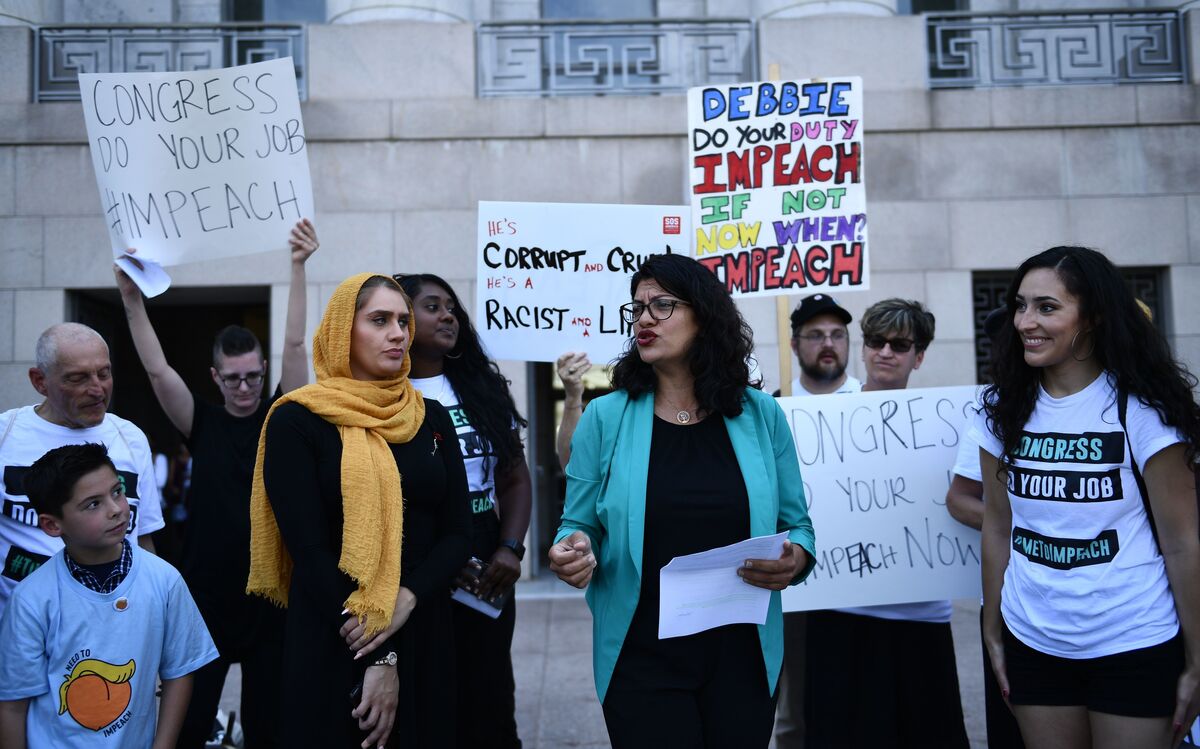 "The Republican Senate's 'see no evil, hear no evil' attitude toward such a serious national security concern is unacceptable and must change," Schumer wrote to Senate Majority Leader Mitch McConnell, R-Ky.

McConnell said in a speech on the Senate floor that the Senate intelligence committee is doing its own work looking into the whistleblower matter, but he didn't say when it might hear from Maguire or whether that might take place in an open session.

The majority leader also defended what he called Republicans' record on assistance to Ukraine against Russian aggression and observed that he'd urged then-President Barack Obama to supply Kyiv with weapons, not just nonlethal assistance — which Obama declined to do but which Trump has.

Critics see an abuse of power

For Democrats, Trump's actions in the Ukraine matter have amounted to an abuse of his office made all the more flagrant since it ignored months of back-and-forth about foreign influence in U.S. elections.

Justice Department special counsel Robert Mueller documented the Russian attack on the 2016 election and the many contacts between Trump's camp and Russians — but did not establish a conspiracy between the two to throw the election.

What Mueller did establish, Democrats argue, is that it's improper and illegal for Americans to solicit foreign help for a political campaign — as they charge Trump may have done in the Ukraine affair.

That was enough for some of the president's toughest critics to insist he be removed, as California Sen. Kamala Harris did, for example, over the weekend.

ICYMI: @KamalaHarris to me in an interview re: Trump’s Ukraine controversy: “He’s not a patriot.”

“We need to proceed with an impeachment process and he needs to be impeached.” pic.twitter.com/SghBo2XCLH

The most anti-Trump members in the House said that what they called the president's transgressions were being emboldened by a failure of Congress to respond.

"The integrity of our democracy isn't threatened when a president breaks the law. It's threatened when we do nothing about it," wrote Rep. Alexandria Ocasio-Cortez on Twitter.

It is one thing for a sitting president to break the law. It’s another to let him.

The GOP’s silence & refusal to act shouldn’t be a surprise. Ours is.

What remains unclear, however, is whether the Ukraine affair might move the needle on impeachment inside Washington with House Speaker Nancy Pelosi or broadly among the American people.

Although many Democrats support impeaching Trump, most Americans have told pollsters they don't. And although many members of the Democratic majority in the House want some kind of impeachment process to move forward, McConnell and his majority continue to control the Senate.

Trump has counted on that bulwark and even seemed to dare Democrats to move ahead with impeachment proceedings on the expectation that whatever their result in the House, they'd stall in the Senate — and wind up doing more damage to Pelosi and her members than to him.