Accessibility links
Met Opera Will Not Cancel Domingo Performances Despite Staff Protests In a closed-door meeting with the company's chorus and orchestra, General Manager Peter Gelb argued that the Met has no reason to investigate the famed opera singer or to cancel his performances. 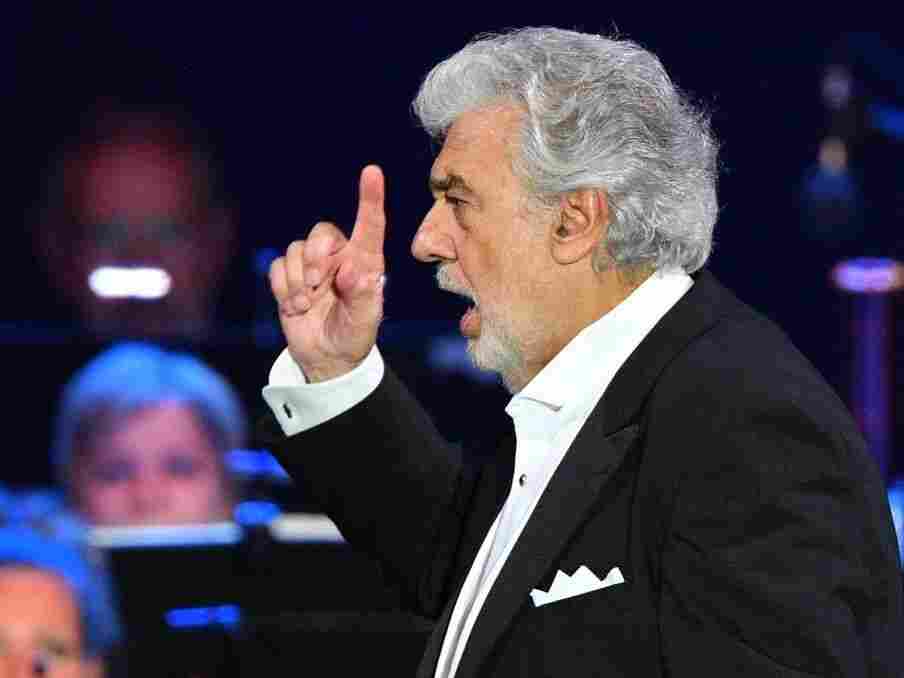 Opera singer Plácido Domingo performs in Szeged, Hungary, on Aug. 28. In a meeting on Saturday, the Metropolitan Opera's general manager discussed why he has not suspended or investigated Domingo, who has been accused of sexual misconduct by 20 women. Attila Kisbenedek/AFP/Getty Images hide caption 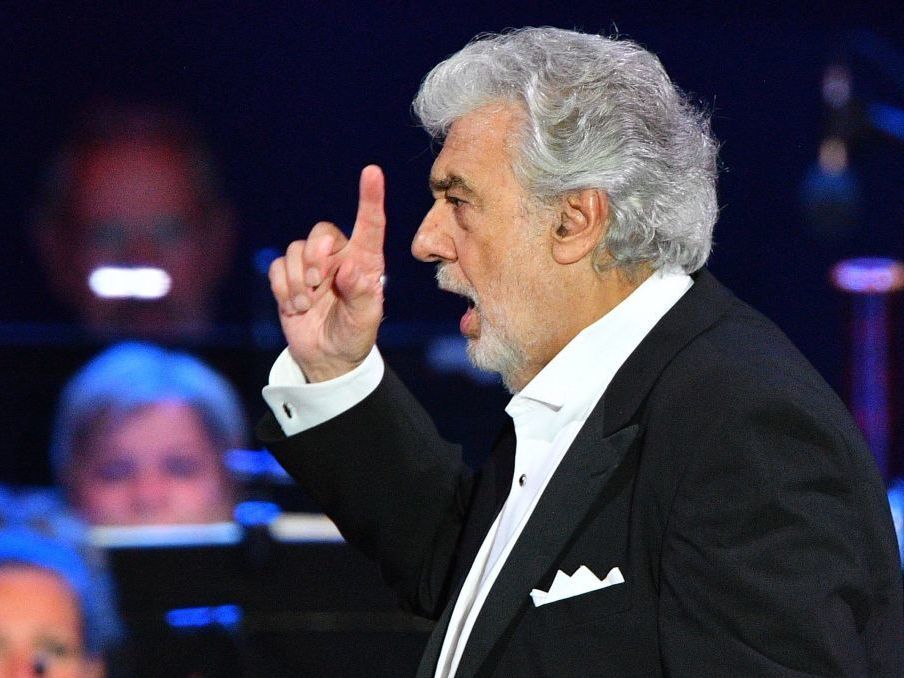 Opera singer Plácido Domingo performs in Szeged, Hungary, on Aug. 28. In a meeting on Saturday, the Metropolitan Opera's general manager discussed why he has not suspended or investigated Domingo, who has been accused of sexual misconduct by 20 women.

On Saturday afternoon, the general manager of the Metropolitan Opera, Peter Gelb, held a meeting with the Met's chorus and orchestra. The purpose was to discuss why he has not suspended or investigated star opera singer Plácido Domingo, who has been accused of sexual misconduct by 20 women. The meeting was called on Friday afternoon, the same day that NPR published the accounts of a number of Met employees who object to performing alongside Domingo.

Four longtime Met employees spoke to NPR about Saturday's meeting on the condition of anonymity because they fear retribution. Gelb had requested that the meeting be kept in confidence within the company. (NPR communicated with seven Met employees who were in attendance.) The meeting, which lasted about 45 minutes, took place immediately after the dress rehearsal of Verdi's Macbeth, in which Domingo is slated to star and which opens on Wednesday.

The four employees say that Gelb's purpose in calling the gathering was to explain to the chorus and orchestra why he has not suspended or released Domingo from his contracted performances at the Met.

Gelb also attempted to differentiate this decision from actions the opera house took in the wake of nine men's allegations of sexual abuse against conductor James Levine, who was first suspended and then fired by the Met. (After his dismissal, Levine then sued the opera company, which filed a counterclaim; the two sides reached a settlement for an undisclosed sum last month.)

Attendees also made reference to stage director John Copley, who was fired by the Met in January 2018 after allegedly making a sexual remark to a Met chorus singer. (Copley has disputed the allegation.)

The employees say that in his remarks to the staff on Saturday, Gelb said that he had not taken any action after 20 women made allegations of sexual misconduct against Domingo to the Associated Press in part because the women came forward only to the AP and not to other credible news outlets as well. (The staffers said that one of the media organizations that Gelb specifically cited was The New York Times, where Gelb's father, the late Arthur Gelb, served as managing editor.)

Gelb told the group that because no other media organizations have published accusers' accounts, he felt that the AP's reporting lacked "corroboration." In its reporting, the AP said that it had corroborated the women's allegations; in its initial story, published Aug. 13, the AP said that it had spoken to nearly three dozen people who said that they witnessed "inappropriate sexually tinged behavior" by Domingo.

In addition, the Met sources say, Gelb asserted on Saturday that all the women who spoke to the AP came forward anonymously, which he believes lessens the veracity of their allegations. At least one Met employee challenged that claim during the meeting, pointing out that two of the women have come forward by name: Patricia Wulf and Angela Turner Wilson.

In fact, both the New York Times and NPR's All Things Considered spoke to Wulf for reports published and aired in the days following the AP's initial reporting.

The Met employees also told NPR that during the meeting, Gelb asserted that a makeup artist denied Wilson's account of Domingo suddenly reaching into her costume and "groping" her bare breast "hard," causing her to cry out. (What the AP reported this month is that the unnamed makeup artist "did not recall the incident and did not want to comment further on the record.")

Last month, after the first AP report was published, LA Opera, the company that Domingo has led for more than 15 years, announced that it was launching an investigation into Domingo.

One union of performers, the American Guild of Musical Artists, which represents the chorus, soloists, stage managers, directors, dancers and choreographers at the Met, announced this month that it had retained its own counsel to conduct a separate investigation into the allegations against Domingo. AGMA has not announced a time frame for its inquiry.

Gelb declined NPR's request for an interview on Monday. Instead, the Met sent NPR a statement that said: "On Saturday Sept. 21, after the dress rehearsal of Macbeth, Peter Gelb held an open conversation with members of the Orchestra and Chorus as he has done with other groups within the Met over recent weeks. In the meeting Mr. Gelb reiterated how seriously the Met takes accusations of sexual harassment and abuse of power."

The statement continued: "He explained that because there was currently no corroborated evidence against Mr. Domingo the Met believed that the fair and correct thing to do was to wait until the investigations by LA Opera and AGMA had taken place. He explained that if corroborated evidence is made public either through the investigations or other means, the Met would take prompt action."

The Met staffers also say that during the Saturday gathering, which included at least one HR representative, individuals complained to Gelb about bad optics and inconsistently applied HR policy regarding sexual misconduct, pointing to the Levine and Copley situations in particular. The difference in response, they said, creates the impression that men are listened to at the Met, but women's accusations go unheeded.

"Plácido Domingo is a huge cash cow, and sometimes I feel like management cares more about money and reputation," a female chorister said to NPR. "What if these accusations turn out to be true or if there's legal action against Maestro Domingo? I feel that Peter Gelb is saying, 'I don't have a problem exposing my artists to such situations.' "

On March 14, 2018 — two days after Levine was fired — the Met announced to its employees that it was establishing an anonymous hotline for harassment and misconduct complaints, which is being managed by an outside firm.

During the Saturday conversation, Gelb said that there have been no accusations against Domingo within the Met and that the Met will not conduct its own investigation into Domingo. Instead, he reiterated that the Met will continue to wait for LA Opera to conduct its investigation. Domingo is not scheduled to perform at LA Opera until February 2020; in the meantime, he will be appearing at the Met not just in Macbeth but also in Puccini's Madama Butterfly in November.

The Met employees who spoke to NPR say that somewhere between 40 and 60 company staffers attended the meeting; others, some of them say, may have stayed away because of the last-minute nature of the assembly. They add that during the meeting, one employee spoke up in Gelb's favor and thanked him for his handling of the Domingo situation.