Accessibility links
FBI Says U.S. Soldier Taught Bomb-Making To Far-Right Extremists The case is the latest in a string of recent arrests and investigations related to attempted far-right infiltration of the U.S. military, prompting calls for more thorough screenings of enlistees. 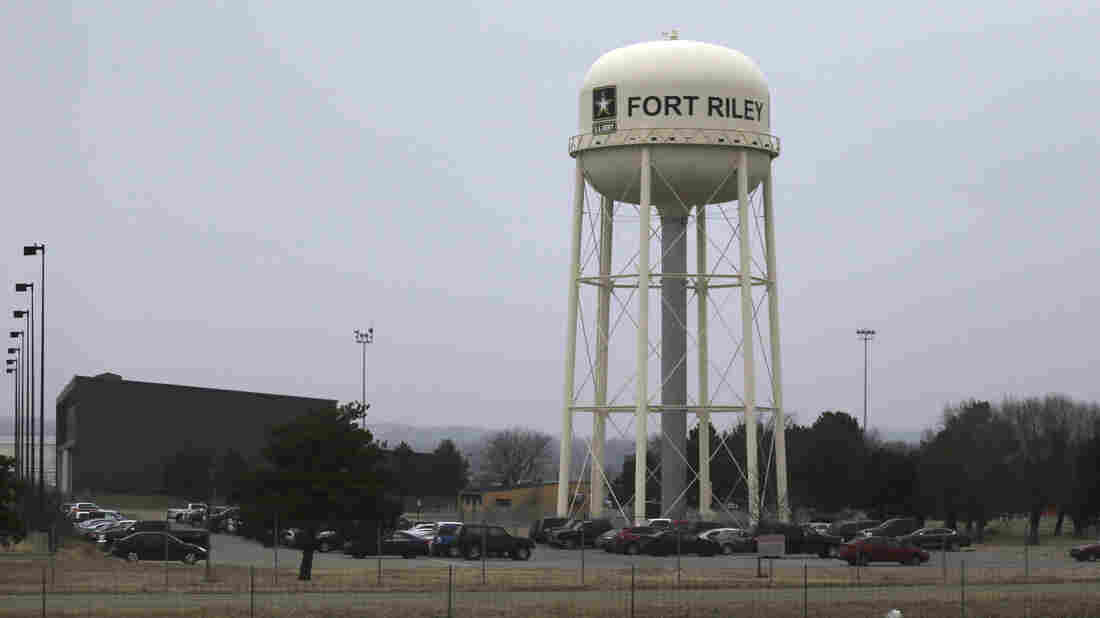 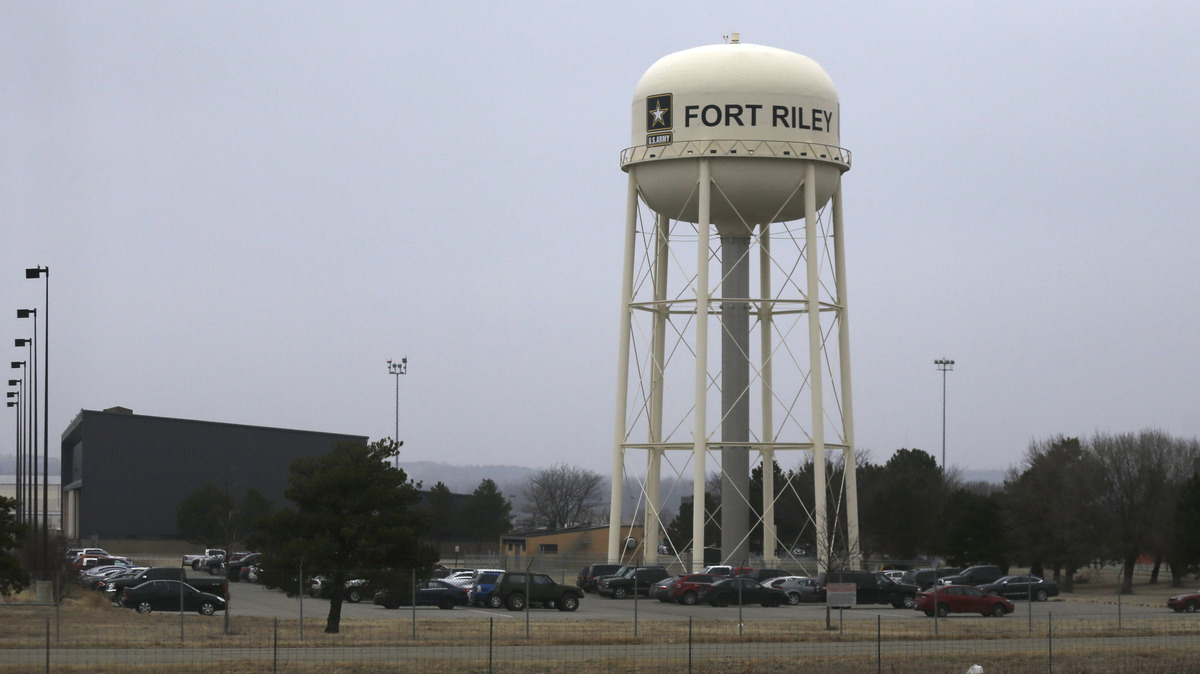 A 24-year-old soldier in Kansas who allegedly planned to fight with a violent far-right group in Ukraine was charged Monday with distributing bomb-making information over social media, according to the Justice Department.

The FBI says Army Spc. Jarrett William Smith, stationed at Fort Riley, came under investigation in March, when authorities learned he had given bomb-making lessons over Facebook. The FBI also says Smith was in talks about traveling to Ukraine, where he wanted to fight alongside the neo-Nazi paramilitary Azov Battalion.

"To fight is what I want to do," Smith wrote to an extremist associate, according to an exchange included in the complaint.

Court documents portray Smith as a young man who has been active in the far right for years, predating his joining the Army in 2017. The case is the latest in a string of recent arrests and investigations related to attempted far-right extremist infiltration of the U.S. military, prompting calls for more thorough screenings of enlistees.

In 2016, authorities say, Smith corresponded with Craig Lang, who's identified in documents as a U.S.-based extremist who has traveled to Ukraine to fight with far-right militants. The FBI describes the relationship between Lang and Smith as a "mentorship" — they corresponded on Facebook and met at least once in person, in El Paso, Texas.

In one exchange included in the charging papers, Smith told Lang that if he didn't find a slot in Ukraine by October 2016, he planned to join the U.S. Army. Lang replied that he'd put Smith in touch with a militant who vets volunteers and then warned Smith that he'd be expected to fight if the Ukrainian government cracked down on the unit.

"You may also be asked to kill certain people" who fall into the "bad graces of certain groups," Lang wrote to Smith, according to the documents.

The documents don't say what happened to Smith's efforts to go to Ukraine, but he apparently followed through on Plan B. In 2017, Smith joined the Army as an infantry soldier and was stationed at Fort Bliss in Texas until moving to Fort Riley this past July.

The FBI listed Smith as a private first class, but a spokesman at Fort Riley said Smith was promoted last June to the rank of specialist. In an email, Lt. Col. Terence M. Kelley confirmed that Smith was an active-duty soldier who entered the Army from Conway, S.C. Kelley said Smith has not deployed.

"These allegations violate our Army values so we take them very seriously," Kelley wrote, adding that military law enforcement assisted in the arrest over the weekend.

In December 2018, authorities say, Smith, who was still at Fort Bliss at the time, led a Facebook group chat in which he boasted about his skill at making improvised explosive devices — homemade bombs.

"Oh yeah, I got knowledge of IEDs for days," Smith wrote, according to court papers. "We can make cell phone IEDs in the style of the Afghans. I can teach you that."

Smith went on to provide a how-to guide for building a cellphone detonator. He also taught the unidentified members of the group how to make explosive material out of match heads.

In August, a month after he moved to Kansas, Smith began chatting with an FBI confidential source that he took to be a fellow far-right extremist, according to the complaint. Smith allegedly talked with the source about killing members of the far-left group Antifa and about targeting cell towers or a local news station.

In a later chat, according to the FBI, Smith suggested using a large car bomb to attack the headquarters of a major news network. The name of the outlet was redacted in the complaint. Authorities say that, once again, Smith gave detailed bomb-making guidance, with tips for causing the most casualties and damage.

In one chilling exchange in the complaint, Smith told the undercover source to pack a vehicle with explosives, then leave the scene to detonate remotely: "30 minutes later, BOOM."

Smith also engaged with an undercover FBI employee on the encrypted social media platform Telegram, a form of communication used by extremists across the ideological spectrum. Addressing Smith as "brother," the undercover operative asked for help on building a car bomb that would be stable enough to transport from Oklahoma to Texas, the complaint says. Smith responded with instructions for what he called "a Middle East-style bomb" that's powerful enough to damage or destroy U.S. military vehicles.

"Most of the time it can obliterate civilian vehicles and people nearby," Smith added, according to the complaint.

Authorities say Smith then asked about the target. The response from the operative: "TX politician." When Smith pressed for specifics, according to the complaint, the operative said he had a few ideas in mind, preferably federal government and congressional targets. Smith offered more instructions on how to build different types of explosives, including "a quick and cheap gas grenade," the complaint says.

"One hell of a wallop and it leaves behind a toxic chlorine gas," Smith told the operative, according to court papers.

In one exchange from last Friday, the operative asked Smith for ideas about Texas politicians to target, someone deserving of "fire, destruction and death." According to the complaint, Smith replied: "Outside of Beto? I don't know enough people that would be relevant enough to cause a change if they died."

That was an apparent reference to Democratic presidential candidate Beto O'Rourke. In a statement to ABC News, which first reported Smith's arrest, the O'Rourke campaign said, "Our team is in direct contact with the FBI regarding this case. This isn't about any one person or one campaign, and we won't let this scare us or cause us to back down in fighting for what's right."

On Saturday, a day after mentioning O'Rourke, Smith was arrested. An FBI special agent involved in the operation said in the complaint that Smith admitted to him that he regularly shares his bomb-making expertise "even with individuals who tell him they intend to use the information to cause harm to others."

"Smith stated that he did this to cause 'chaos,' " the special agent said.

Smith was charged in federal court Monday with one count of distributing information related to explosives and weapons of mass destruction. If convicted, he could face up to 20 years in federal prison.

Rachel Treisman, an intern on NPR's national desk, contributed to this story.