Accessibility links
Trump To UN General Assembly: 'Future Does Not Belong To Globalists' Trump's speech comes as his administration confronts foreign policy challenges in the Middle East and a growing political scandal in Washington.

Trump To U.N. General Assembly: 'The Future Does Not Belong To Globalists'

Trump To U.N. General Assembly: 'The Future Does Not Belong To Globalists' 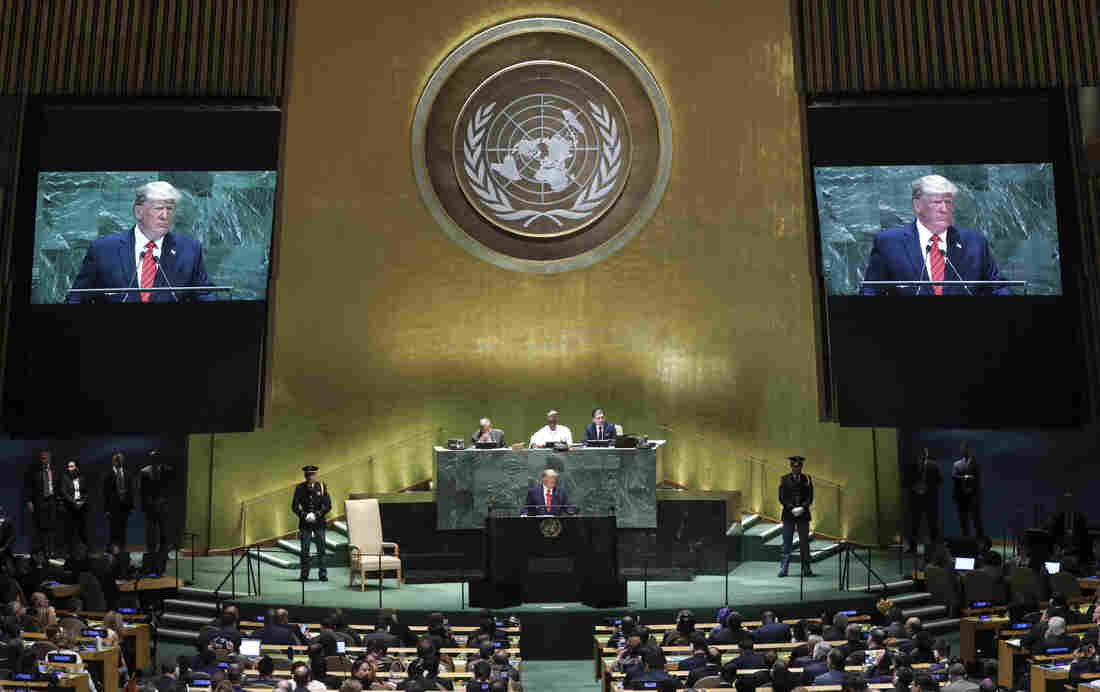 At the U.N. General Assembly in New York on Tuesday, President Trump told world leaders to reject "globalism" and to look out for the interests of their own countries first.

"The future does not belong to globalists; it belongs to patriots," Trump said.

Tuesday marked Trump's third address to the General Assembly as president. As he has done in the past, Trump used his remarks to the international organization to make the case for his "America first" style of diplomacy that puts nationalism ahead of multilateral efforts.

Since entering the White House, Trump has pulled the U.S. out of several international agreements, including the Paris climate accords and the Iran nuclear deal.

Watch: The Future Belongs To 'Patriots'

He's also called out allies in NATO over military spending, a point he made again at the United Nations.

"We are also revitalizing our alliances by making it very clear that all of our partners are expected to pay their fair share of the tremendous defense burden, which the United States has borne in the past," Trump said.

He lamented China's membership in the World Trade Organization, accusing Beijing of gaming the system.

"As far as America is concerned, those days are over," Trump said.

The Trump administration has imposed tariffs on Chinese imports as part of an escalating trade dispute with China.

"Hopefully, we can reach a deal that would be beneficial for both countries, but as I have made very clear, I will not accept a bad deal for the American people," he said.

Impeachment Has Never Been Very Popular, But That Hasn't Stopped Congress Before

While Trump has tangled with China on trade, the U.S. is also confronting rising tensions with Iran.

Trump called Iran "one of the greatest security threats" to peace-loving nations.

The U.S. issued a new round of sanctions against Iran on Friday after blaming Iran for an attack on a Saudi oil facility.

"As long as Iran's menacing behavior continues, sanctions will not be lifted, they will be tightened," Trump said.

Trump's address also touched on immigration. The administration has faced protests over its treatment of migrants at the southern border. Trump attempted to discourage migrants who may be thinking of making the trip to the U.S. without appropriate documents.

Trump delivered his speech amid growing calls from Democrats for his impeachment over his reported interactions with the Ukrainian government.