Accessibility links
The Ongoing Clash Between Trump And Big Cities Mayors of some of the cities the president targets say they aren't worried about jeopardizing federal funding and will continue fighting the rhetoric and policies they believe will harm urban areas. 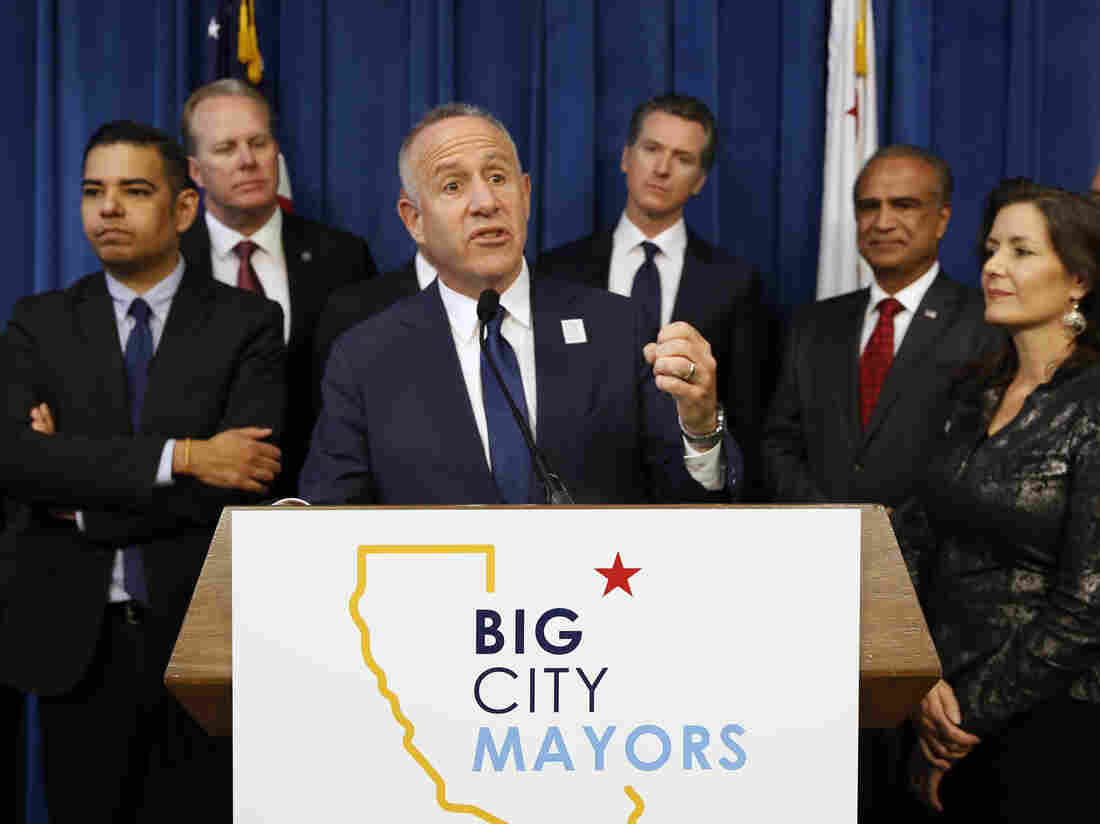 President Trump's depiction of urban life in America is often grim, and the tension between the president and big city mayors is often filled with name-calling and lawsuits. For many mayors who end up in the president's crosshairs, it's a balancing act as they try to determine how to ward off criticism, as well as Trump administration policies they think may be harmful, while not jeopardizing federal funds earmarked for city projects.

Los Angeles Has A Homeless Problem, Now The Trump Administration Is Getting Involved

Los Angeles Has A Homeless Problem, Now The Trump Administration Is Getting Involved

For example, Trump raised plenty of hackles with his recent comments about the homeless in California hurting the prestige of Los Angeles and San Francisco. Darrell Steinberg, chairperson of California's State Commission on Homelessness and Supportive Housing, calls the president's statements hypocritical.

"This is a president who is calling for the elimination of the Community Development Block Grant Program, which is a primary source of funding for affordable housing," says Steinberg, who is also the mayor of Sacramento.

Last week, Steinberg signed a letter on behalf of California's big cities along with California Gov. Gavin Newsom. It asked the president to increase housing vouchers by the thousands for the state's low-income residents. Steinberg says it's time for any adversarial relationship between cities and the Trump administration to end.

"When it comes to homelessness, there's only one thing that matters and that is bringing as many people under a roof as possible and helping them reclaim their lives," Steinberg says.

However, the Trump administration rejected California's request. Housing and Urban Development Secretary Ben Carson wrote back, saying that the federal government is doing its part.

Homelessness, though, is just one issue where the president has been on the attack. He has disparaged big cities led by Democrats for a variety of other problems. Recently, he blasted Baltimore for its economic and crime problems. He has been particularly harsh in condemning "sanctuary cities" for putting limits on cooperating with ICE, the country's Immigration and Customs Enforcement agency. Trump tried to block some of those cities, including Chicago, from receiving Justice Department funds often used to hire police officers and obtain services that law enforcement could not otherwise afford. He lost that battle in court.

Chicago Mayor Lori Lightfoot says that obviously the city needs help from the federal government, "but we are not going to compromise our values in pursuit of federal dollars." Lightfoot says the president loses nothing by attacking cities "because he's not going to get any votes of large urban centers like the city of Chicago — some, but nothing that's actually going to profit him."

"We're talking about less than .01% of our budget. So we're not worried about that funding," Keller says, because the city can get those dollars elsewhere. "But also we believe in the rule of law, and that's why we've joined the lawsuits with the U.S. Conference of Mayors to resist against the president trying to leverage funding for equipment for our law enforcement folks in exchange for immigration policy."

While the relationship between Trump and some big cities remains adversarial, Bryan Barnett, the head of the U.S. Conference of Mayors and also mayor of Rochester Hills, Mich., says the goal is to actually be partners with the president.

"Our first posture is always to collaborate and work together and find a shared success," Barnett says. "But if need be we will make sure our voices are heard and that we represent the people who live in our cities."

No rapprochement is likely anytime soon. More than two dozen cities and states are joining California and suing the Trump administration over rolling back emission standards.