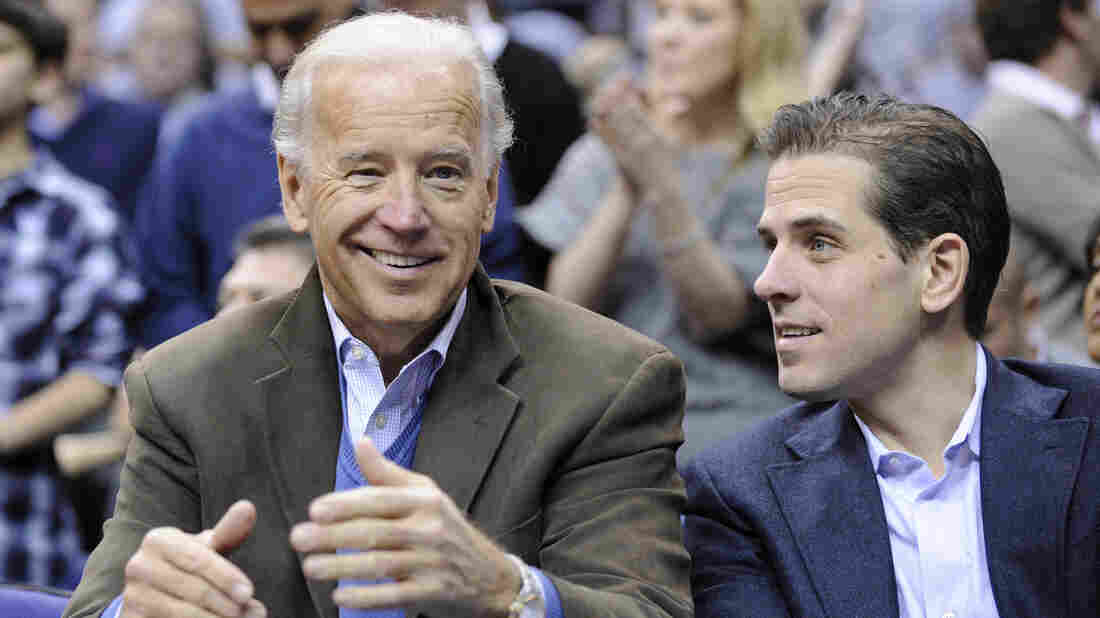 Then-Vice President Joe Biden and his son Hunter Biden attend a basketball game in Washington in 2010. Joe Biden frequently dealt with the Ukrainian government and pressed the government to deal with corruption issues. At the same time, Hunter Biden was on the board of a leading gas company in Ukraine. President Trump and some of his supporters have called for an investigation. Nick Wass/AP hide caption 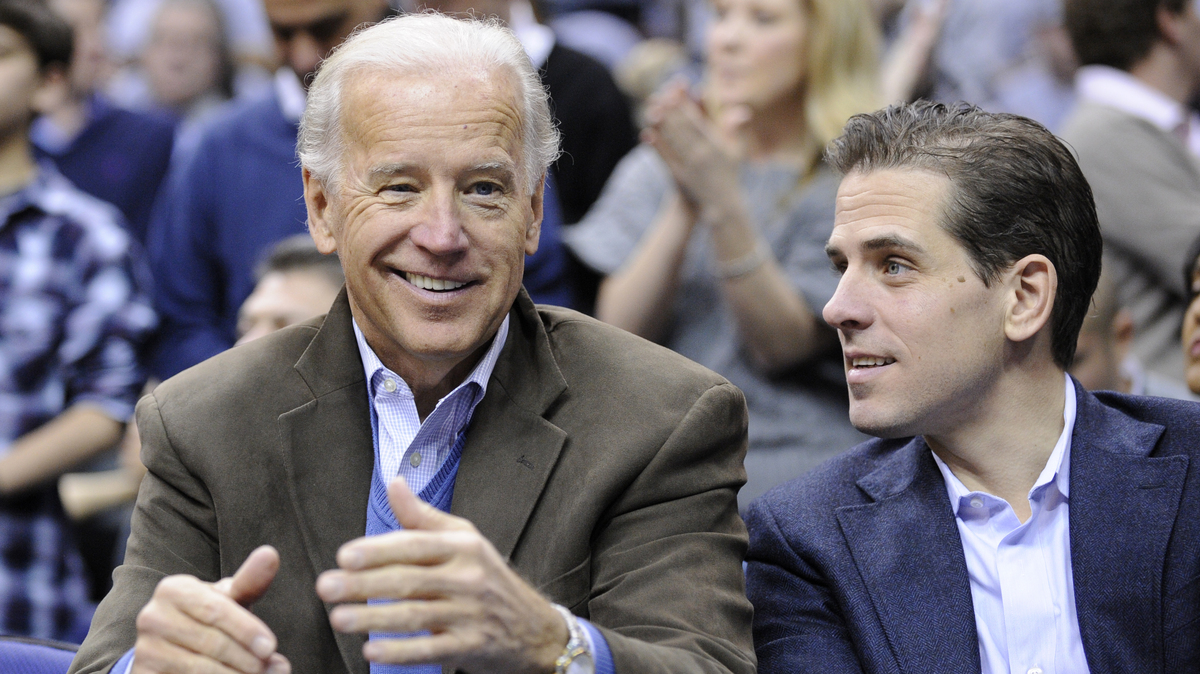 Then-Vice President Joe Biden and his son Hunter Biden attend a basketball game in Washington in 2010. Joe Biden frequently dealt with the Ukrainian government and pressed the government to deal with corruption issues. At the same time, Hunter Biden was on the board of a leading gas company in Ukraine. President Trump and some of his supporters have called for an investigation.

In a July 25 conversation with Ukrainian President Volodymyr Zelenskiy, President Trump asked for an investigation of former Vice President Joe Biden and his son Hunter Biden for their activities in Ukraine several years ago.

In a memorandum of that call, released Wednesday, Trump said, "There's a lot of talk about Biden's son, that Biden stopped the prosecution and a lot of people want to find out about that so whatever you can do with the attorney general would be great."

The call is reportedly connected to a whistleblower complaint, which has ignited the controversy. Trump, Democrats say, pressured a foreign government to dig up dirt on Biden, now a Democratic presidential candidate.

Trump Asked Ukrainian President For 'A Favor' On Biden; DOJ Says No Charges

But Trump says that he did nothing wrong and that the inquiry is just a "witch hunt." In fact, Justice Department officials said Wednesday that prosecutors determined there was no campaign finance violation.

Trump has instead pointed to "corruption" by Joe Biden and his son.

The Biden camp has argued that claims of wrongdoing on the Bidens' part are unfounded and have been debunked. "Trump's doing this because he knows I'll beat him like a drum," Biden told reporters recently. "And he's using the abuse of power and every element of the presidency to try to do something to smear me."

Here are five questions about the accusations and the facts behind them.

1. So what did Joe Biden do in Ukraine?

Ukraine had a revolution in February 2014, when the pro-Russian president, Viktor Yanukovych, was ousted and fled to Russia amid massive, sustained protests that focused on corruption in his administration.

Trump's Ukraine Call May Be 'Game Changer' On Impeachment

A pro-Western president, Petro Poroshenko, took over. Then-President Barack Obama's administration was prepared to work with the new government, a position shared with European governments and international institutions, such as the World Bank and the International Monetary Fund. But they were all concerned about the country's endemic corruption, which had plagued the country ever since it gained independence in the 1991 breakup of the Soviet Union.

Obama made then-Vice President Biden the point man, and he became a frequent visitor to Ukraine. By his own count, Biden says he went there about a dozen times from early 2014 through early 2016.

In the spring of 2014, as Joe Biden began his trips to Ukraine, Hunter Biden took a position on the board of the country's largest private gas company, Burisma. He was reportedly paid up to $50,000 a month.

The question of a possible conflict of interest — with Hunter Biden profiting in a country where his father was actively working with the government — was raised publicly at the time.

Joe Biden said that he followed government ethics regulations and that his son was a private citizen who made his own decisions.

Also, the Obama administration actually supported investigations into corruption. This included looking into the gas company because the owner, Mykola Zlochevsky, was close to the ousted president and they had both fled the country before the Bidens became regular visitors.

3. Is there any sign of wrongdoing by either Joe Biden or his son Hunter Biden?

This is what Trump and his personal lawyer, Rudy Giuliani, are suggesting. But they have not provided evidence of illegal actions. Multiple fact checks have called Trump's accusations of corruption by the Bidens misleading.

Joe Biden has actually boasted about his work in Ukraine as a spokesperson for the White House and the West generally. He called for the ouster of the top Ukrainian prosecutor, Viktor Shokin, for what was widely seen as his failure to investigate corruption.

At an event at the Council on Foreign Relations in 2018, Biden said that on one of his many trips to Ukraine, he told the country's leaders that they had to get rid of the prosecutor if they wanted $1 billion in U.S. aid.

The prosecutor, Viktor Shokin, was dismissed by Ukraine's parliament on March 29, 2016.

4. How do Trump and his supporters see Joe Biden's work?

They argue that Joe Biden wanted the prosecutor ousted to protect his son from being investigated. But there has been no evidence of wrongdoing, and Joe Biden was tasked as vice president with helping to weed out corruption in Ukraine.

The key figure in pushing the corruption narrative appears to be Giuliani. He has been in contact with Ukraine multiple times and urged officials there to look into the Bidens. The story has been percolating for the past few months. Giuliani has repeatedly tweeted about it and discussed it on TV.

Meanwhile, Hunter Biden stepped down from his post at the gas company this past spring as his term expired, saying he turned down an offer to have it extended. He recognized that it was going to be an issue in the 2020 campaign.

"My qualifications and work are being attacked by Rudy Giuliani and his minions for transparent political purposes," Hunter Biden said in a statement at the time.

Democrats say they now want to see the complaint by the whistleblower, which has still not reached Congress.

The inspector general of the intelligence community, Michael Atkinson, reported the whistleblower complaint about the call to the House Intelligence Committee in a Sept. 9 letter.

But when Atkinson was called before a closed-door committee hearing last Thursday, he reportedly told members that he was being blocked from releasing the details of the complaint by Joseph Maguire, the acting director of national intelligence. Maguire has been called for the same committee this Thursday in a public hearing.

Meanwhile, House Speaker Nancy Pelosi, D-Calif., who had resisted calls from congressional Democrats on the impeachment question, announced Tuesday that she was initiating a formal impeachment inquiry against the president.

Greg Myre is a national security correspondent. Follow him @gmyre1.

In the audio of this report, as in a previous Web version, we incorrectly say that then-Vice President Joe Biden visited Ukraine in March 2016. That is what Biden appeared to say when he spoke about demanding that Ukrainian authorities fire a corrupt prosecutor. In fact, Biden often traveled to Ukraine and spoke with the country's leaders from 2014 through 2016, but he was not in Ukraine in March 2016.