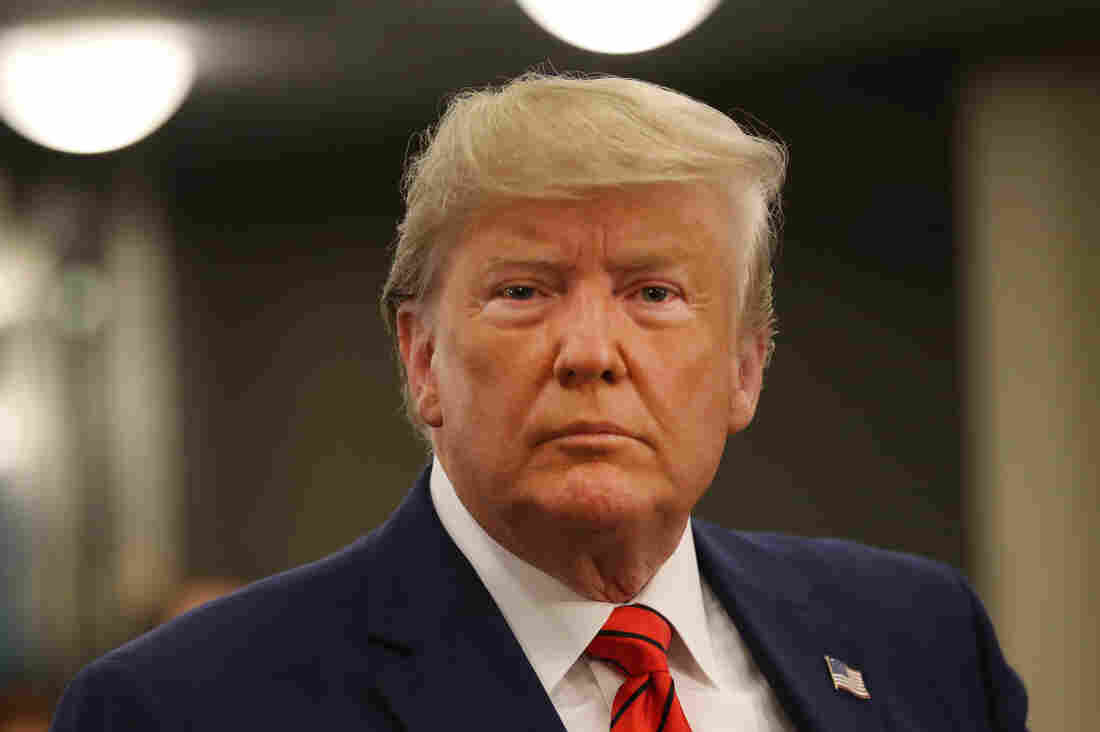 President Trump tweeted on Tuesday that he will unveil the unredacted text of his much-discussed July phone conversation with Ukraine's leader. Above, Trump speaks to the media at the United Nations General Assembly on Tuesday in New York City. Spencer Platt/Getty Images hide caption 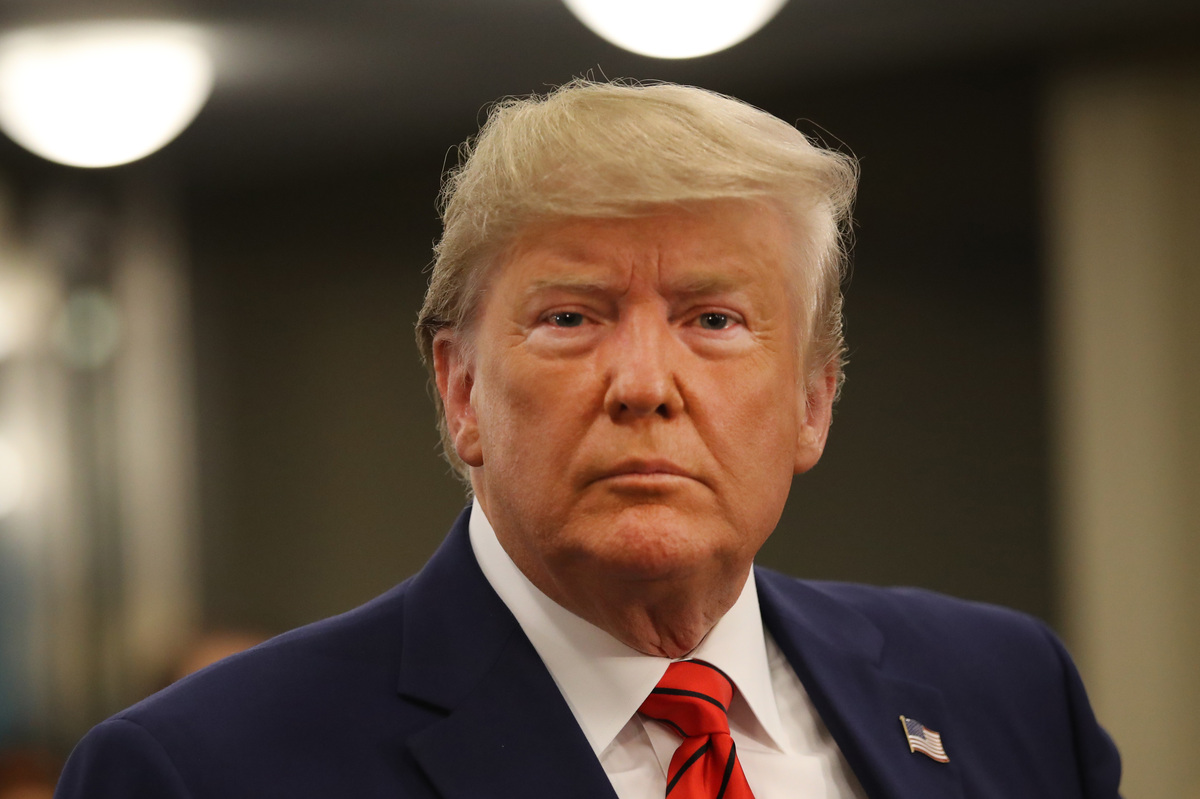 President Trump tweeted on Tuesday that he will unveil the unredacted text of his much-discussed July phone conversation with Ukraine's leader. Above, Trump speaks to the media at the United Nations General Assembly on Tuesday in New York City.

President Trump vowed on Tuesday that he will release a transcript of his phone call from earlier this year with Ukraine's president.

The July 25 call is at the heart of a rapidly intensifying controversy over whether Trump improperly pressured another country to investigate a political opponent, former Vice President Joe Biden.

Trump's tweet came shortly before House Democrats were set to meet to discuss launching an impeachment inquiry over possible abuse of power by Trump as relates to Ukraine, and it appeared to be an effort to undercut an expected announcement from House Speaker Nancy Pelosi.

Trump tweeted that he will release a "complete, fully declassified and unredacted transcript of my phone conversation with President Zelensky of Ukraine."

This will prove it was a "totally appropriate call," he wrote. He says the transcript will be released Wednesday.

"You will see it was a very friendly and totally appropriate call," Trump wrote. "No pressure and, unlike Joe Biden and his son, NO quid pro quo! This is nothing more than a continuation of the Greatest and most Destructive Witch Hunt of all time!"

....You will see it was a very friendly and totally appropriate call. No pressure and, unlike Joe Biden and his son, NO quid pro quo! This is nothing more than a continuation of the Greatest and most Destructive Witch Hunt of all time!

Trump has repeatedly called for an investigation by Ukrainian authorities into Joe Biden and his son, Hunter Biden, despite there being no evidence of wrongdoing.

Trump confirmed earlier Tuesday that he ordered military aid to Ukraine blocked a week before his call with the president of Ukraine.

The aid was held up for months, and Trump has offered conflicting explanations for why.

Acting White House chief of staff and Director of the Office of Management and Budget Mick Mulvaney instructed the State Department and Pentagon not to move forward with $400 million in aid for Ukraine, according to a congressional aide.

The administration did not provide any details on why it was withholding the funds. Neither the State Department nor the Pentagon had any policy objections to the funds being provided to Ukraine. The State Department first informed OMB on June 21 of its intent to obligate the funds to Ukraine. OMB usually has five days to give what is seen as a rubber stamp "yes." In this case, OMB did not provide the green light until Sept. 11.

Trump's call with Ukraine is also reportedly the subject of an intelligence community whistleblower complaint that the administration has been refusing to turn over to Congress.

Democrats are unlikely to be satisfied with the call's transcript alone.

Speaking at a forum sponsored by The Atlantic, Pelosi dismissed Trump's claim that the transcript will prove he did nothing wrong.

"It's really important to know this: There is no requirement there be a quid pro quo in the conversation. If the president brings up [that] he wants them to investigate something ... that is self-evident [that] it is not right. We don't ask foreign governments to help in our elections," Pelosi said.

Ahead of Pelosi's announcement about impeachment proceedings, Trump told reporters that such a move will be good for him.

"The good news is the voters get it," Trump said at the United Nations in New York. "This is why they say it's good for the election, but you know what? It's bad for the country — what she's doing is very bad."

Meanwhile, Joe Biden was among the Democrats changing his tune on impeachment on Tuesday.

A campaign aide said that unless the White House releases the relevant materials connected to the matter, Biden will throw his support behind Pelosi and the House in pursuing impeachment.

Biden addressed the impeachment issue himself on Tuesday afternoon.

That followed his decision to suspend military assistance to Ukraine. Trump has insisted that there was never a "quid pro quo" in which he said he'd agree to release aid to Ukraine in exchange for dirt on Biden or his family.

One question the transcript could answer is what, specifically, Trump said to Zelenskiy about investigating Biden's son, Hunter, who once sat on the board of a Ukrainian gas company.

Trump has gone back and forth about whether he might release the transcript, saying on one hand that it might clear up the Ukraine affair but on the other hand that he was worried about the precedent it might set.

Trump has also said that it was a "perfect" call, mostly congratulatory about Zelenskiy's election two months before, and that it contained nothing "inappropriate," because the president was mindful about the number of U.S. officials and others who might hear it or be briefed on its contents.

At the same time, Trump acknowledged on Tuesday that he had suspended U.S. assistance to Ukraine before the phone call. The reason the president gave in New York City on Tuesday was that he wanted European governments to give more support to Ukraine's government.

The European Union's mission to the United States responded on Tuesday that its governments have given more than 15 billion euros to Ukraine since Russia's incursions there in 2014, which began the latest phase of support from the West for Kyiv.

DYK that since 2014, the EU & European Financial Institutions have mobilized more than €15 billion in grants & loans to support the reform process in #Ukraine, with strong conditionality on continued progress? More in @eu_eeas @eu_near factsheet: https://t.co/dGlW4pD2tj #UNGA pic.twitter.com/Qn7iQRRcz9

U.S. assistance resumed this September. And then House Intelligence Committee Chairman Adam Schiff, D-Calif., learned about a whistleblower inside the intelligence community who had filed a complaint about Trump's conversation with a foreign leader.

The Justice Department has opined that acting Director of National Intelligence Joseph Maguire doesn't need to give that complaint to Schiff or his counterparts on the Senate intelligence committee.

Pelosi, Schiff and Democrats say that there is no wiggle room in the law and that Maguire must give Congress what he has. Maguire is scheduled to appear before Schiff's committee on Thursday, and Schiff said he has also heard from a lawyer for the whistleblower about making contact with his committee.

The Senate intelligence committee has also said it's exploring how to make contact with the whistleblower.