Accessibility links
Plácido Domingo Withdraws From Met Opera In Wake of Misconduct Allegations The opera star, who has been accused by 20 women, was scheduled to perform Verdi's Macbeth starting on Wednesday night. In an email, he told Met staffers that he will never perform there again. 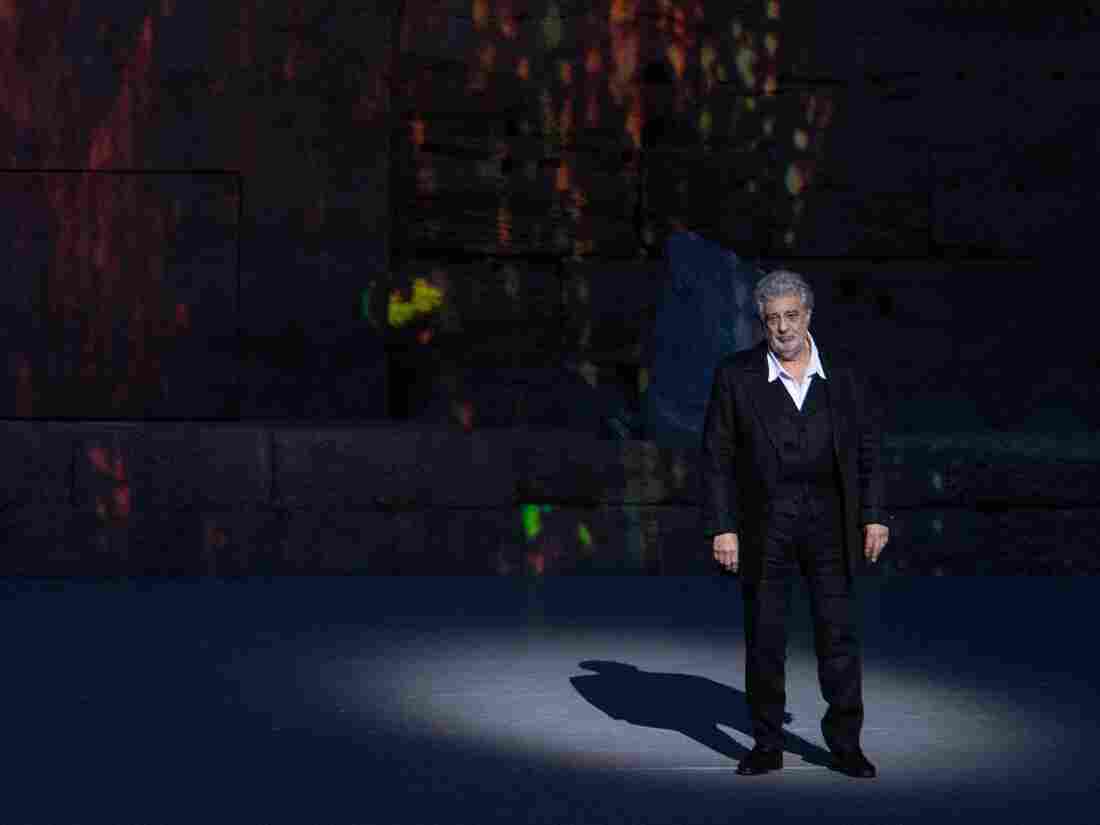 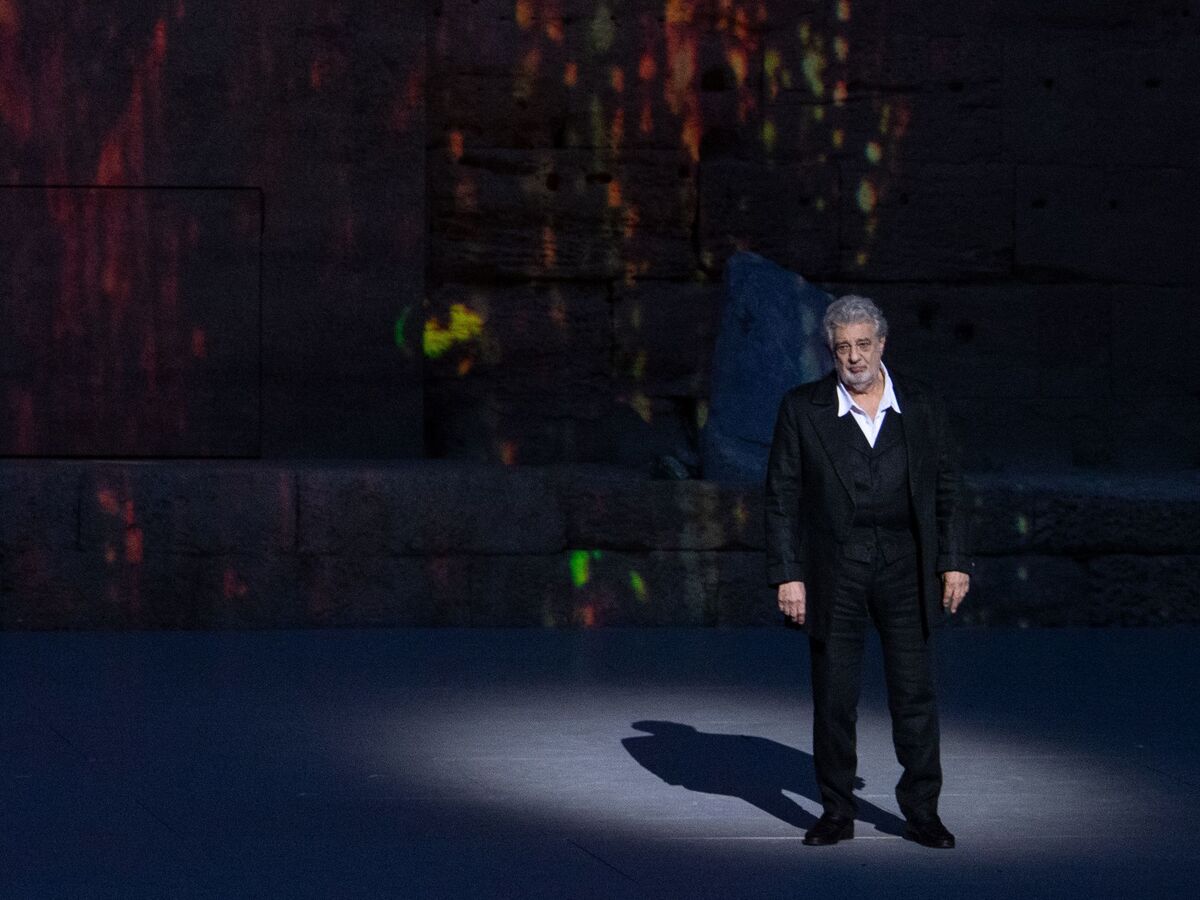 Plácido Domingo on stage in July. Domingo was scheduled to perform at New York's Metropolitan Opera on Wednesday but withdrew following accusations of harassment.

On Tuesday afternoon, at 5:07 p.m., Metropolitan Opera general manager Peter Gelb sent an email to staff that began this way:

"Dear Members of the Company,

Plácido Domingo has agreed to withdraw from all future performances at the Met, with immediate effect. We are grateful to him for recognizing that he needed to step down."

The announcement came a day before Domingo, who has been dogged by sexual misconduct allegations, was to star in the title role of Verdi's Macbeth at the New York opera house. It also followed reporting by NPR about discomfort on the part of some Met employees at having to work with Domingo in the wake of those allegations, and about a closed-door meeting that Gelb held with company performers on Saturday, the day after NPR's initial report was published and just after dress rehearsal for Macbeth ended.

The allegations against Domingo, who has been one of opera's most bankable stars for decades, were first published in two reports by The Associated Press, the first on Aug. 13 and the second on Sept. 7. In all, 20 women have accused the opera superstar of inappropriate behavior, ranging from groping to unwanted touching or kissing to late-night phone calls, among other behavior.

Two organizations have launched investigations into the alleged misconduct. LA Opera, where Domingo has been general director for more than 15 years, is conducting a probe. And the American Guild of Musical Artists [AGMA], the union which represents the chorus, dancers, choreographers and others at the Met, announced this month that it had retained counsel to conduct an investigation. Before Tuesday's announcement, the Met had said it planned to wait for the results of those investigations.

The announcement from Gelb came just a day after the Met sent a statement to NPR that read: "Peter Gelb held an open conversation with members of the orchestra and chorus as he has done with other groups within the Met over recent weeks ... because there was currently no corroborated evidence against Mr. Domingo the Met believed that the fair and correct thing to do was to wait until the investigations by LA Opera and AGMA had taken place. He explained that if corroborated evidence is made public either through the investigations or other means, the Met would take prompt action."

According to NPR's sources at the Met, during Gelb's Saturday meeting with the company's chorus singers and orchestral musicians, he defined "corroborated evidence" as investigative journalism, done by other outlets in addition to the AP, that would feature interviews with accusers of Domingo. Those sources spoke to NPR anonymously, fearing retribution.

In its reporting, the AP said that it had corroborated the women's allegations, speaking to nearly three dozen people who said that they witnessed "inappropriate sexually tinged behavior" by Domingo. And in the days immediately following the initial AP report, both the New York Times and NPR interviewed Patricia Wulf, one of the accusers.

In a statement last month, Domingo told NPR: "I believed that all of my interactions and relationships were always welcomed and consensual."

Gelb's email to Met staff on Tuesday also included a statement from Domingo:

"I made my debut at the Metropolitan Opera at the age of 27 and have sung at this magnificent theater for 51 consecutive, glorious years. While I strongly dispute recent allegations made about me, and I am concerned about a climate in which people are condemned without due process, upon reflection, I believe that my appearance in this production of Macbeth would distract from the hard work of my colleagues both on stage and behind the scenes. As a result, I have asked to withdraw and I thank the leadership of the Met for graciously granting my request. I am happy that, at the age of 78, I was able to sing the wonderful title role in the dress rehearsal of Macbeth, which I consider my last performance on the Met stage. I am grateful to God and the public for what they have allowed me to accomplish here at the Metropolitan Opera."

Public pressure has also mounted against the Met and Domingo. On Tuesday afternoon, New York state senator Brad Hoylman, who represents parts of Manhattan — including Lincoln Center, the home of the Metropolitan Opera — wrote in a pair of tweets: "Plácido Domingo should be removed from the show—and if he isn't, the director of the Met should be removed too. It's appalling that 20 women alleging misconduct are being treated this way. ... It is not Peter Gelb's job to protect Plácido Domingo from accountability. It is his job to protect the health and safety of his employees and to ensure that survivors of misconduct are heard — and he is failing."

Domingo will be replaced by Serbian baritone Željko Lučić, who was already scheduled to sing the role of Macbeth later in the Met run.

Gelb's email to the Met's staff concluded with a reference to allegations concerning another opera star, which broke Monday night:

"I also wanted to inform you that following an alleged incident of misconduct reported by the Royal Opera House concerning Vittorio Grigolo, we will be suspending him with immediate effect from all future performances at the Met, pending the outcome of the ROH investigation."