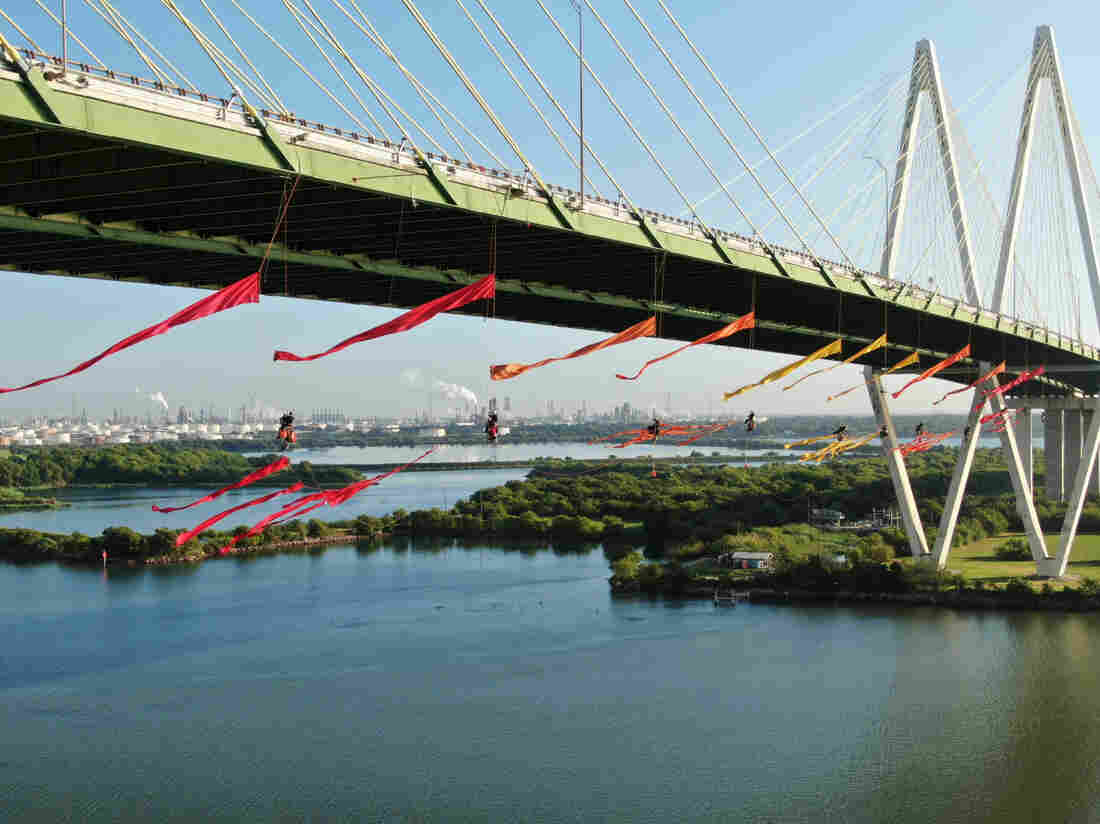 Greenpeace USA climbers rappelled off and formed a blockade on the Fred Hartman Bridge near Baytown, Texas, shutting down the Houston Ship Channel, the largest fossil fuel thoroughfare in the United States. Handout/via Reuters hide caption 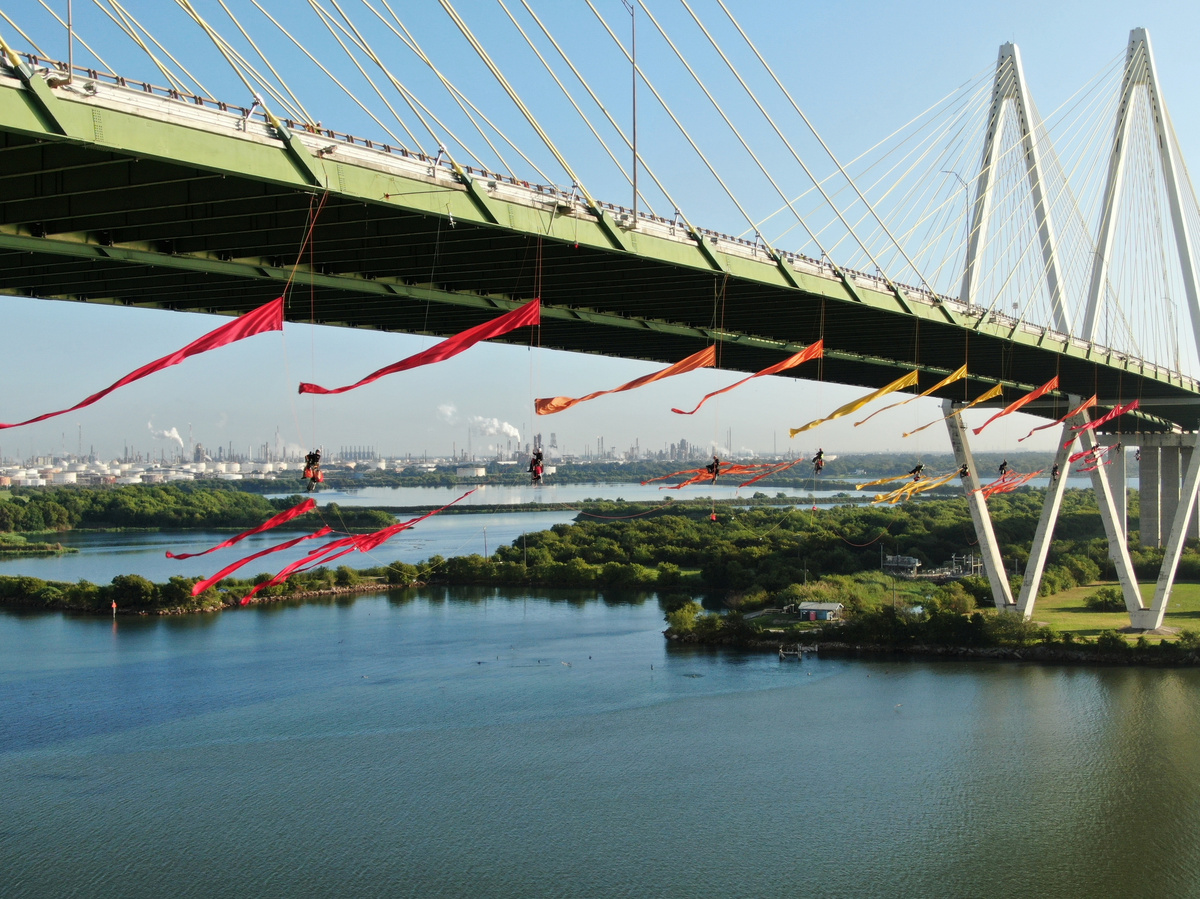 Greenpeace USA climbers rappelled off and formed a blockade on the Fred Hartman Bridge near Baytown, Texas, shutting down the Houston Ship Channel, the largest fossil fuel thoroughfare in the United States.

Greenpeace activists in Texas recently rappelled off a key bridge over the Houston Ship Channel, unfurling streamers and hanging in midair in a scene that looked kind of like high-rise window washers meets Cirque de Soleil. Their aim was to protest the oil and gas that funnels through the waterway every day by disrupting bridge and water traffic.

"The reason we're here is because the era of fossil fuels needs to end," said protester Rico Sisney in a Facebook Live video he recorded as he swung from a wire off Houston's Fred Hartman Bridge.

The Houston channel stretches from the city to the sea, and is home to refineries from global oil companies such as Exxon Mobile and Shell. More oil is exported through it than anywhere else in the country. The group had intended to stay for 24 hours to block that flow.

But before the day was over, sheriff's deputies rappelled down, tied themselves to the activists, and forcibly lowered them to waiting police boats where they were arrested. In all, 31 of the climate activists are now the first to be charged under a new law aimed at protecting the state's pipelines, ports, refineries and other facilities deemed "critical infrastructure."

At least nine states have recently enacted similar laws in the name of safety to protect oil, gas and other energy projects.

But critics say their real aim is to curb direct action protest in the era of climate change.

The protesters face federal charges, but the state law they're accused of breaking carries even steeper prison time — up to two years. Their case could test the law's constitutionality not only in Texas, but in other states that have adopted similar rules.

According to the National Conference of State Legislatures, nine states have adopted similar laws over the last few years. The laws that increases penalties for certain crimes, making trespassing on and disrupting critical infrastructure a felony.

Supporters say they are necessary to allow energy projects to move forward and protect sensitive places such as ports, freight yards, refineries, electric companies and pipelines.

But critics see the law as part of an effort to silence climate activists and high-profile protests. Texas' law doesn't just single out individuals, but also leaves organizations that support them open to fines of up to $500,000.

"I do have some nonprofit clients and I know that they are concerned about their own liability for any protest support at this stage," says Daphne Silverman, an Austin-based defense lawyer who has advised Greenpeace and activists. She points out that these protesters were on a state bridge, a structure not even explicitly covered under the new law.

Silverman says the Texas rule is ripe for a constitutional challenge.

"I think that there is a great risk that it infringes upon our First Amendment rights," she says. "Because of the broadness of it. It's going to capture conduct that should be protected."

States began passing critical infrastructure laws after 2016, when protests over the Dakota Access pipeline stalled construction in some places. Many of the bills share similarities with model legislation promoted by the conservative American Legislative Exchange Council.

In Texas, Greenpeace agrees that the law is unconstitutional. But the group's lawyers say it is premature to imagine the arrests may be part of a test case to get the law struck down. "That remains to be seen," said Greenpeace lawyer Maggie Ellinger-Locke.

Ellinger-Locke points out that the organization itself, so far, has not been charged, just the individual protesters.

As for whether the law will dissuade others from acts of civil disobedience, Rico Sisney, one of the activists who participated in the bridge blockade, doesn't think so.

"The law will be challenged," he says. "I think that folks will also see through it, and see that if the fossil fuel industry and the organizations that put together these types of laws are feeling that level of desperation, that there must be something that we're doing that's working."

The protesters are scheduled to appear in Texas State court in early December.