Accessibility links
'The Most Elaborate Wedding Ever Staged': Rosetta Tharpe At Griffith Stadium In 1951, gospel star Rosetta Tharpe got married in front of thousands of fans at a baseball stadium. In some ways, says biographer Gayle Wald, it set the template for today's stadium rock concerts. 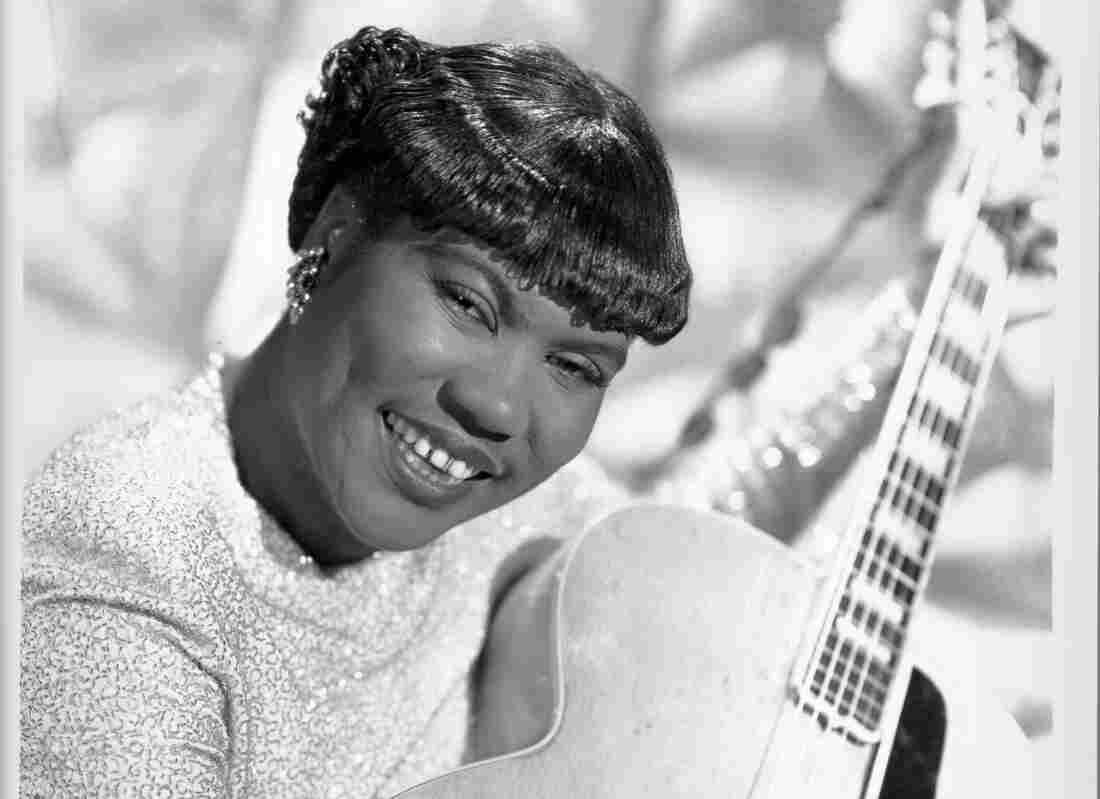 Sister Rosetta Tharpe, circa 1950. In 1951, she got married in a baseball stadium and performed a concert in front of thousands of fans. Michael Ochs Archives/Getty Images hide caption 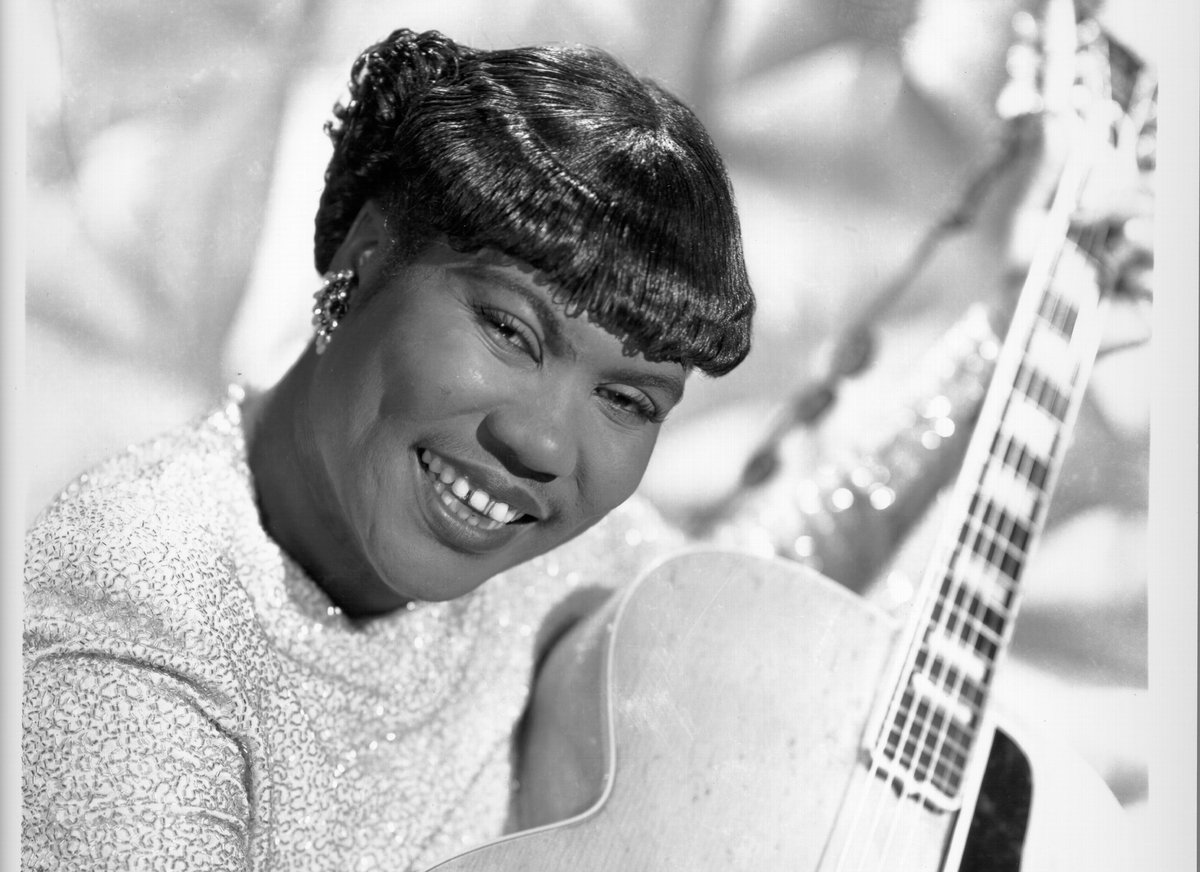 Sister Rosetta Tharpe, circa 1950. In 1951, she got married in a baseball stadium and performed a concert in front of thousands of fans.

In some ways, it was just like any other wedding. The organist played "Here Comes the Bride." Bridesmaids and groomsmen lined up shoulder to shoulder. A minister presided.

But that's where the similarities stopped. Everything else was spectacle. For one thing, the couple getting married wasn't in a traditional wedding venue; instead, they were in a massive major league baseball stadium in Washington, D.C. Tickets were sold. Vendors hawked souvenirs. And the bride was a gospel music superstar.

The date was July 3, 1951, and Sister Rosetta Tharpe was getting married in front of an estimated 20,000 strangers. Newspaper ads invited people to witness "the most elaborate wedding ever staged ... plus the world's greatest spiritual concert."

Music historian Gayle Wald, author of Shout, Sister, Shout!: The Untold Story of Rock-and-Roll Trailblazer Sister Rosetta Tharpe, spoke with Ari Shapiro about the event as part of NPR's Turning the Tables series. Hear the radio version at the audio link, and read more of their conversation below.

Ari Shapiro: Remind us who Rosetta Tharpe was, and where she was in her career in 1951.

Gayle Wald: Rosetta Tharpe was the first person to popularize black gospel music and bring it into the secular realm. She played an electric guitar when she sang. She started recording for Decca Records in 1938, and kind of had a breakout year that year. She played at the Cotton Club, the Savoy Ballroom — big New York clubs that were not usually the places that women who grew up in the Church of God in Christ played. She always marketed herself as a gospel musician, but she played for all different kinds of audiences.

By 1951, when the wedding took place, she had been through several phases of her career. She had fronted a popular swing band led by Lucky Millinder. She had a big hit in 1946 with a song called "Strange Things Happening Every Day," which would later be important to Elvis Presley. And she had also teamed up with a younger singer named Marie Knight. Marie and Rosetta toured together for several years together in the late '40s and were very popular as a duet. They were women who toured without men: Rosetta played piano and guitar, and Marie played piano and they harmonized. They were their own show.

Some people in the present day have even described Sister Rosetta Tharpe as a queer icon.

That's right. When I was writing the book, there was a lot of discussion about Rosetta's attraction to men and women. No one wanted to go on the record to talk about it. Marie Knight, who I interviewed for the book many times, went on record telling me that those rumors were untrue, so my reporting in the book includes her voice as well.

By 1951, Sister Rosetta Tharpe had been married twice. And this marriage in a stadium in front of 20,000 people was basically a PR stunt, right?

Totally. Her career had taken a little tiny bit of a dip after the late '40s, and she was looking for a way to boost her career. There were some concert promoters in D.C. who had an idea of using the baseball stadium, which had been used by African-Americans in D.C. for revivals. They thought, "Well, we've done revivals there and it's a place where are shows; let's put it all together. She's not an evangelist, but let's have something close to that —we'll have a sacred ceremony. Let's do a wedding!"

But they didn't have a groom!

She went out and found one.

It was, like, in the contract: She had one year to find a man to marry.

It's unclear whether she knew Russell Morrison before she decided, a year in advance, to get married to someone in Griffith Stadium. But she found her groom, whether she knew him before or not, and he eventually became her manager.

And the wedding had the trappings of a stadium show, from fireworks to a dress that cost what a car would have cost in 1951.

Exactly. Tharpe bought [the dress] at the most important department store in Richmond, Va., which was Thalhimer's. At the time, black women couldn't go into a department store and buy off the rack; they couldn't try clothes on. She had already been arrested for shopping while black in the late '40s at Thalhimer's when she tried to pay for a fur coat with cash. So it was important that she purchased an $800 wedding dress from Thalhimer's, and even more important that the store, in deference to her fame — and perhaps embarrassment, one hopes, for the earlier incident — sent the dress up in its own car with a fitter, who was a white woman. People who were around Rosetta Tharpe at that time remember that it was extraordinary that here, a dress had been driven up from Richmond for her, and that she was fitted in the dress by a white woman who had to button up all the little satin buttons on the back.

The event itself was such a spectacle. Can you just give us a sense of what it felt like to be in that stadium?

There was a stage on second base. They had a big platform set up. The musicians who had accompanied Rosetta Tharpe or were invited guests were playing the roles of the wedding party. So she had her backup singers; they were there to be her bridesmaids. Marie Knight, her old performing partner, was her maid of honor. And there was a local preacher from Washington, D.C. who came in to do the ceremony. He was a little flippant in marrying them; he was known as a joker. He made jokes from the stage about whether Russell had the money for a ring.

Even though the whole thing was a stunt, it was a legally binding wedding.

It was, absolutely. They married according to D.C. statute.

And yet, it felt like everybody was in on the joke, judging from the audio of the event. You can hear people laughing!

It's got this feminist piece to it where even the women — it's primarily a female audience — recognize the rituals of marriage. There's giggles at the "obey" part. There's a kind of freedom to it.

Because if anyone's gonna obey anyone in that marriage, she's not gonna be the one obeying him.

Exactly! Who's the star? Later on in Rosetta and Russell's marriage, when they would send out Christmas cards, they said "Mr. and Mrs. Rosetta Tharpe Morrison." So we knew who was in charge in that relationship.

The gospel community is a religious one. This seems a little bit blasphemous. Was there any blowback?

No, not at all. In fact, Ebony magazine did a giant photo spread about the wedding. It was covered in the African-American newspapers around D.C. It was kind of a mark of pride. It was a nice spectacle for everyone to be interested in.

She Can Make That Guitar Talk

So once they tie the knot, the show starts. Today, stadium shows are happening in big cities all over America all the time. How unusual was a concert of this magnitude in 1951?

The Beatles didn't play Shea Stadium till 1965. The fact that there was a solo female artist filling a stadium is remarkable. And so it's possible this is an early stadium rock concert, or an early stadium pop concert, at least.

Like when Beyoncé headlines Coachella or Kanye performs on a floating stage — that is a descendant of this wedding?

There's a confluence of things going on here. Because the stadium had been used for massive religious revivals, which themselves contained spectacles — mass baptisms that included fireworks and costuming and music. There's a way those two traditions — the spectacle of entertainment and the spectacle of religious observance — come together. I think without having Griffith Stadium being used as a site of black revivals, you couldn't have really imagined [the wedding].

Did it give her career the boost that she was looking for?

In a minor way. By the 1950s, she was losing her traditional U.S. audience. There were bigger stars emerging in gospel music: Mahalia Jackson had overtaken her; Clara Ward and the Ward Singers were popular. And the younger audience was gravitating toward younger performers and being marketed rock and roll music, which she had helped to influence.

And I have to ask whether the marriage lasted.

The marriage lasted! Until Rosetta Tharpe died in 1973.

Unbelievable. Well, it just goes to show: You spend your whole life looking for somebody, and then you get a contract that you have to find a groom within a year. And that's the one that sticks!

And maybe three was the charm.