Accessibility links
Iran's Rouhani Touts Gulf Peace Plan, Says It Would Start With U.S. Troops Leaving "Our region is on the edge of collapse, as a single blunder can fuel a big fire," President Hassan Rouhani said at the U.N. on Wednesday. 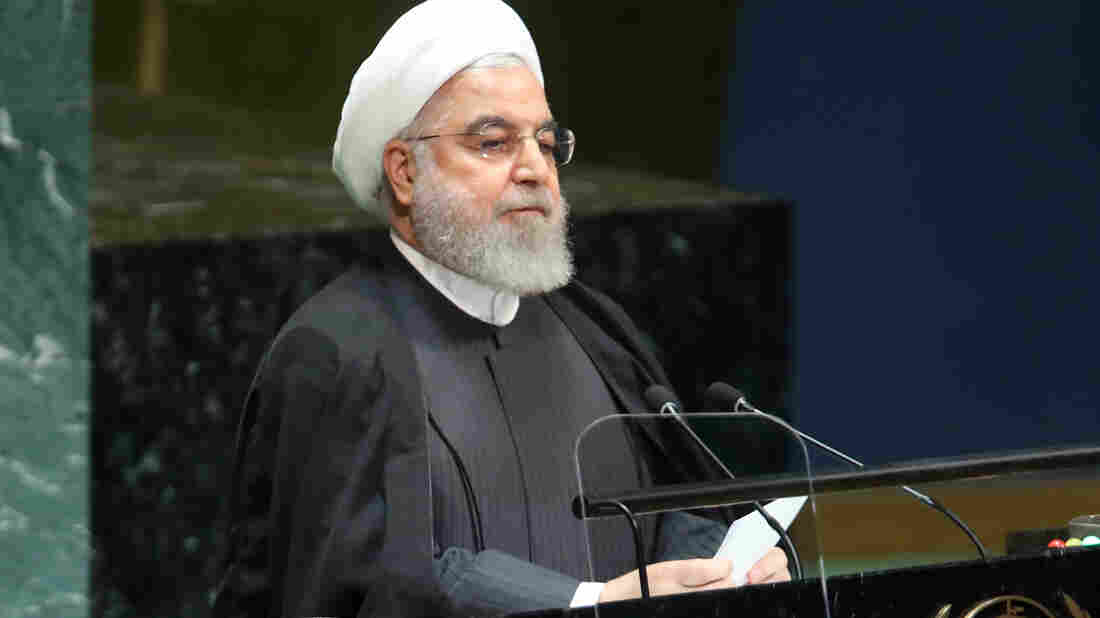 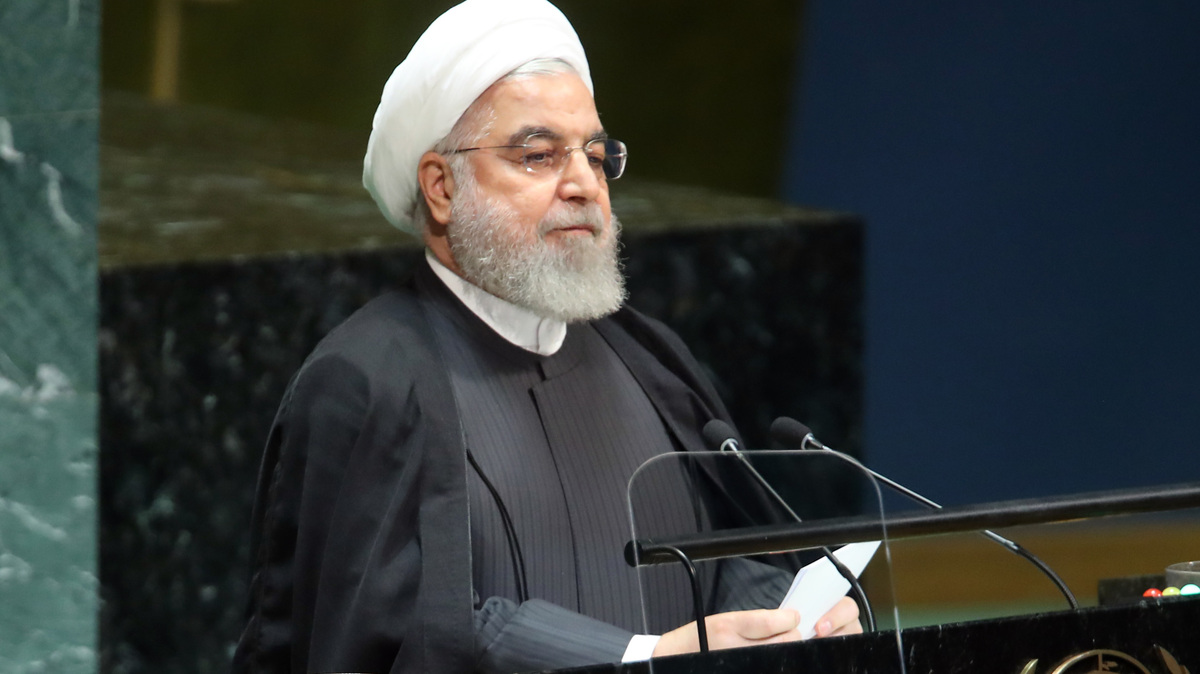 Iranian President Hassan Rouhani called for Saudi Arabia to reject U.S. intervention during his speech at the U.N. General Assembly in New York City on Wednesday.

Iran is facing off with rival Saudi Arabia in Yemen, trading barbs with President Trump and threatening the movement of oil. But none of those things prevented Iranian President Hassan Rouhani from unveiling something a bit unexpected at the U.N. General Assembly on Wednesday: a regional peace proposal.

"Ladies and gentlemen, the Middle East is burning in the flames of war, bloodshed, aggression, occupation and religious and sectarian fanaticism and extremism," Rouhani said.

Iran could help secure the Persian Gulf region and guarantee the flow of oil through the strategically important Strait of Hormuz, Rouhani said — if, he added, those benefits extend to all countries equally. He invited countries in the region to join what he called the security coalition of HOPE — a rough acronym, he said, for the Hormuz Peace Endeavor.

Details about that coalition would be forthcoming, Rouhani said. But he summarized it by saying peace in the Persian Gulf can't be achieved through foreign intervention.

"The security of our region shall be provided when American troops pull out," Rouhani said. He added, "Security shall not be supplied with American weapons and intervention."

Rouhani said that 18 years after the Sept. 11, 2001, attack, the U.S. has "failed to reduce acts of terrorism." He claimed credit for Iran in dismantling ISIS, saying it did so with the help of neighboring countries. And he said the solutions to the the Arabian Peninsula's conflicts must come from within the region.

"The security of Saudi Arabia shall be guaranteed with the termination of aggression to Yemen, rather than by inviting foreigners," he said.

Citing lingering clashes in Afghanistan, Iraq and Syria, Rouhani said of the U.S., "such a government is clearly unable to resolve more sophisticated issues of today."

After calling on Saudi Arabia to end hostilities in Yemen and urging the U.S. to withdraw, Rouhani warned, "Our region is on the edge of collapse, as a single blunder can fuel a big fire."

Accusing the U.S. of "merciless economic terrorism" against his country, Rouhani said the current round of U.S. sanctions against Iran are meant to keep the country from participating in the global economy. The U.S., Rouhani said, "has resorted to international piracy by misusing the international banking system."

Since arriving in New York, Rouhani has met with leaders such as U.K. Prime Minister Boris Johnson, French President Emmanuel Macron, Japanese Prime Minister Shinzo Abe and German Chancellor Angela Merkel. He has not met separately with Trump, but the Iranian leader did appear Tuesday night on the president's favorite TV channel, sitting for an interview with Chris Wallace of Fox News.

Rouhani telegraphed the tone of Wednesday's speech in the interview, pushing Iran's narrative that it supports freedom fighters, not terrorists, when it gives millions of dollars and military support to Hezbollah, Hamas, militants in Iraq and Houthis in Yemen.

"Iran during the last four decades fought against terrorism unequivocally," Rouhani told Wallace. He later added, "Iran is a country that has brought peace in the region."

At the U.N., Rouhani said, "we Iranians have been pioneers of freedom-seeking movements" in the Middle East. Saying that Iran has never surrendered to foreign aggression, Rouhani said his country doesn't believe the U.S. invitations to negotiate a new nuclear deal while the Trump administration touts the harshness of its sanctions.

The U.S. has accused Iran of playing a central role in the Sept. 14 strike on Saudi Arabia's Aramco oil facilities — an attack that knocked out more than half of the Saudi oil-exporting capability and roiled markets worldwide. Last week, Saudi Arabia's military said its investigation shows Iran had "unquestionably" sanctioned the attack.

Iran has repeatedly denied mounting the attack, pointing instead to its Houthi allies in Yemen who claimed responsibility for it. But Saudi officials say the weapons are Iranian in origin — and that their direction and range suggest they were launched from the north, not from Yemen in the south. But the kingdom has stopped short of directly accusing Iran of launching the strike.

On Monday, France, Germany and the United Kingdom issued a statement attributing the strike to Iran. But in a reflection of Iran's complicated relationship with the rest of the world, representatives from those same countries — along with Russia and China — met with Iranian Foreign Minister Mohammad Javad Zarif at the United Nations on Wednesday for talks about the 2015 nuclear agreement known as the Joint Comprehensive Plan of Action.

On his way to that meeting, Zarif said their goal was "to preserve this important achievement of diplomacy."

The JCPOA meeting was chaired by the European Union's top diplomat, Federica Mogherini, who said afterward that the participants want to see the deal fully implemented and that they "confirmed their determination to continue all efforts to preserve the agreement."

Noting that the agreement had been endorsed by the U.N. Security Council, Mogherini said the pact "remains a key element of the global nuclear nonproliferation architecture, and a significant achievement of multilateral diplomacy."

The U.S. has recently increased sanctions on Iranian figures and enterprises, targeting Zarif, Iran's central bank, its Revolutionary Guard and its sovereign wealth fund as the Trump administration seeks to impose its campaign of "maximum pressure" against the country.

Rouhani said that despite the U.S. stance, Iran has attempted to give European signatories to the JCPOA a chance to fulfill its terms. But, he said at the U.N., "unfortunately, we only heard beautiful words, while witnessing no effective measures."

Saying that Iran's patience has a limit, Rouhani said his government won't negotiate while it's being punished by sanctions.

"The only way for talks to begin is to return to commitments and compliance" of the JCPOA and to lift sanctions on Iran, he said.

Hours before Rouhani spoke, Secretary of State Mike Pompeo said Iran is "the aggressor, not the aggrieved" party on the international stage.

Speaking in New York at an event held by United Against Nuclear Iran, Pompeo defended the Trump administration's decision to abandon the international nuclear deal, saying the country maintained its support for Hezbollah, Hamas and Shiite militias.

"Iran has rampaged for four decades — and sadly, with too few consequences," Pompeo said.

As the U.S. attempts to spike the JCPOA, Iran has begun to suspend some of the commitments it made under the deal, including keeping more low-enriched uranium than is allowed.

And in June, Iran's military shot down a U.S. Global Hawk surveillance drone near the Gulf of Oman. The U.S. military has said the aircraft was in international airspace.