Accessibility links
Trump Asked Ukraine For 'Favor' On Biden In Call; DOJ Says No Charges President Trump asked his Ukrainian counterpart to see what he could find out about former Vice President Joe Biden and his family and to be in touch with Trump's lawyer and the attorney general. 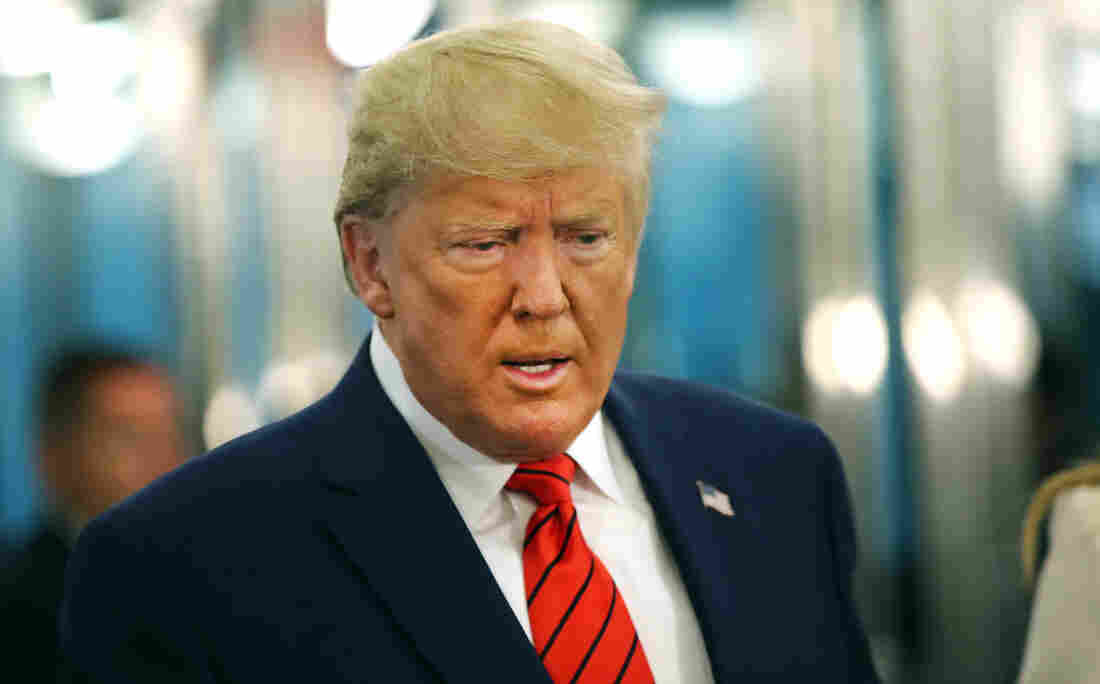 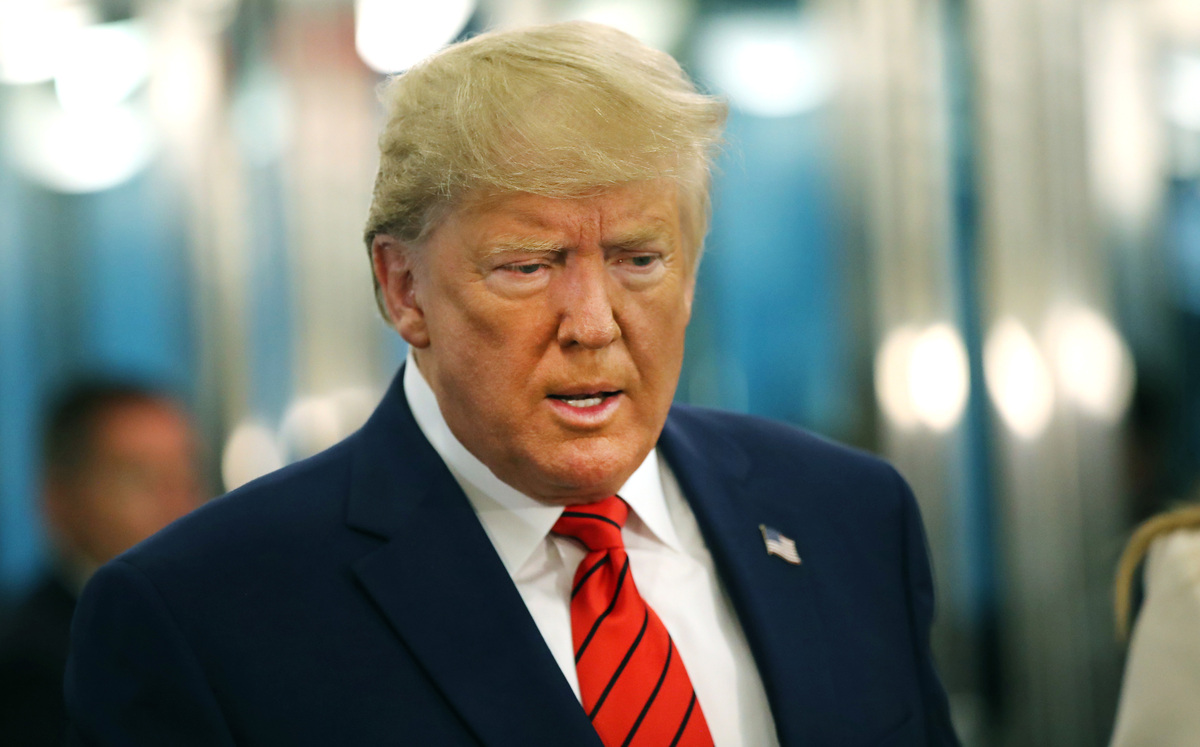 President Trump speaks to the media at the United Nations General Assembly on Tuesday in New York City.

President Trump told Ukraine's president that "a lot of people want to find out" about the activities of former Vice President Joe Biden's family in Ukraine and asked its leader to be in touch with lawyer Rudy Giuliani and Attorney General Bill Barr.

That's according to a briefing for correspondents about the contents of the July 25 phone call, on Wednesday at the Justice Department.

Read the partial White House transcript about the conversation here.

The conversation raised concerns by a whistleblower that Trump may have broken the law by asking for foreign help in the presidential campaign. But the Justice Department concluded that based on the evidence that's available, prosecutors "did not and could not make out a criminal campaign finance violation."

Under the law, a "thing of value" under discussion has to be in some way quantifiable, and the Justice Department couldn't find that here, officials said.

Even so, the official account of the phone conversation confirms the kernel of the story that has brought Washington to a fever pitch over an impeachment inquiry into Trump: The American president asked the Ukrainian president for help with political ammunition against his potential 2020 election rival.

"I would like you to do us a favor," Trump asked President Volodymyr Zelenskiy, according to the official account released on Wednesday.

Later in the conversation, according to the memo, Trump said:

"I would like you to find out what happened with this whole situation in Ukraine ... There's a lot of talk about Biden's son, that Biden stopped the prosecution and a lot of people want to find out about that. So whatever you can do with the attorney general would be great. Biden went around bragging that he stopped the prosecution so if you can look into it ... it sounds horrible to me."

Zelenskiy told Trump that he would appoint the next top prosecutor who might be responsible for prosecuting corruption and that "he or she will look into the situation, specifically to the company that you mentioned in this issue."

Trump then told the Ukrainian president that he would have Giuliani and Barr make contact with him and that "we will get to the bottom of it. I'm sure you will figure it out."

Trump, on his visit to the United Nations on Wednesday, scoffed that the Ukraine affair is a "witch hunt" and that Democrats are worried about being defeated in the 2020 election.

Trump pointed to what he called the successes of his first term, saying, "We've got the strongest economy we've ever had."

Flow of assistance was cut off

The president's July conversation followed moves by the White House to stanch the flow of military assistance for Ukraine that Washington had been providing since the armed incursion by Russian forces in 2014.

Zelenskiy raised the military assistance in the call with Trump, according to the White House account. He thanked the American president and said "specifically we are almost ready to buy more Javelins from the United States for defense purposes."

That's a reference to the American guided anti-tank missile Javelin, built by Raytheon and Lockheed Martin. The U.S. began delivering them to Ukraine's military in 2018.

Trump responded to Zelenskiy with his request for a "favor," mentioning the cybersecurity firm CrowdStrike and a "server" — likely an allusion to the cyberattack against the Democratic National Committee in 2016.

The president also alluded to the testimony of former Justice Department special counsel Robert Mueller, who had appeared in Congress the day before.

Zelenskiy and other Ukrainian officials were "blindsided" by the interruption in American assistance, according to The New York Times.

Other agencies in Washington were not briefed about any reason for the pause in the assistance, nor was Senate Majority Leader Mitch McConnell, R-Ky. After the matter came to the attention of more members of Congress, the assistance was restored earlier this month.

Worries inside the spy world

The whistleblower within the intelligence community brought the matter to the attention of its official watchdog, raising the prospect that Trump's conversation might have violated U.S. law.

The inspector general concluded that it rose to the level of an "urgent concern" because the intelligence community is responsible for safeguarding elections.

Then the matter was referred to the Justice Department, officials said, which reached its conclusion about the paucity of evidence that a campaign finance law had been broken.

Justice Department officials also say Barr, the attorney general, learned about the conversation several weeks after it took place but has not spoken about it with Trump and was never asked by Trump to contact anyone in Ukraine.

The DOJ officials said Barr has not spoken about the Ukraine affair with Giuliani, either.

Giuliani, meanwhile, has acknowledged that he has been closely involved with talks with Ukrainians about launching or reviving some kind of investigation into Hunter Biden's time doing in business in Ukraine.

Former Vice President Biden said Tuesday that neither he nor his son have done anything wrong and he decried what he called the smears and conspiracy theories that were being propounded by the White House.

Trump is guilty of abusing his office, Biden said, and if he continues what Biden called his "stonewalling" of Congress, the former vice president said he'd support impeachment.

"It is a tragedy for this country that our president put personal politics above his sacred oath," Biden said in a statement on Wednesday. "This is not a Republican issue or a Democratic issue. It is a national security issue. It is a test of our democratic values. Congress must pursue the facts and quickly take prompt action to hold Donald Trump accountable."

House Democrats say they've agreed to initiate a new phase of their impeachment inquiry, although it isn't clear how soon that might result in new action in the Congress or against Trump.

The dispute over the whistleblower's complaint began when House intelligence committee Chairman Adam Schiff, D-Calif., learned that it had been filed but not what it contained.

Schiff and other members of Congress argued the administration had no right under the law to withhold the matter from the committees of oversight.

That is the standard under the law that governs the relationship with Congress, the officials said, and that is why the Justice Department took the position that the administration did not have to give the document to lawmakers.

Schiff's complaints about the administration's positions started a snowball that resulted in growing attention to the whistleblower case and then press reports that helped shape public understanding about the Ukraine affair.

The temperature rose in Washington to such a point that Trump — who says that he has not done anything wrong and there was no "quid pro quo" in his discussion with Zelenskiy — felt obliged to release the official White House records about his call.

What still isn't clear is whether the whistleblower complaint itself might become public. The congressional intelligence committees were expected to be able to review it on Wednesday afternoon and then get copies of their own on Thursday.

Acting Director of National Intelligence Joseph Maguire is scheduled to appear before the House and Senate intelligence committees on Thursday.

Trump and White House officials have said they don't know the identity of the whistleblower, but the president nonetheless dismissed the person's actions as "partisan."

And officials at the Justice Department on Wednesday affirmed that the intelligence community's inspector general found "some indicia of an arguable political bias on the part of the complainant in favor of a rival political candidate."

At the same time, the IG concluded that the complaint's allegations nonetheless appeared "credible."

Trump's allies, including Sen. Lindsey Graham, R-S.C., have argued that the "partisan" nature of the complaint must be taken into account in understanding the full story.

This is the result of someone who wasn't personally involved with Trump's call getting a secondhand briefing about it and then trying to help Democrats, Graham and others argue.