Accessibility links
Juul Accepts Proposed Ban On Flavored Vaping Products As Its CEO Steps Down Flavored e-cigarettes are the majority of Juul's sales, but agreeing to stop fighting the Trump administration's regulations may fend off a move to pull Juul products from the market altogether. 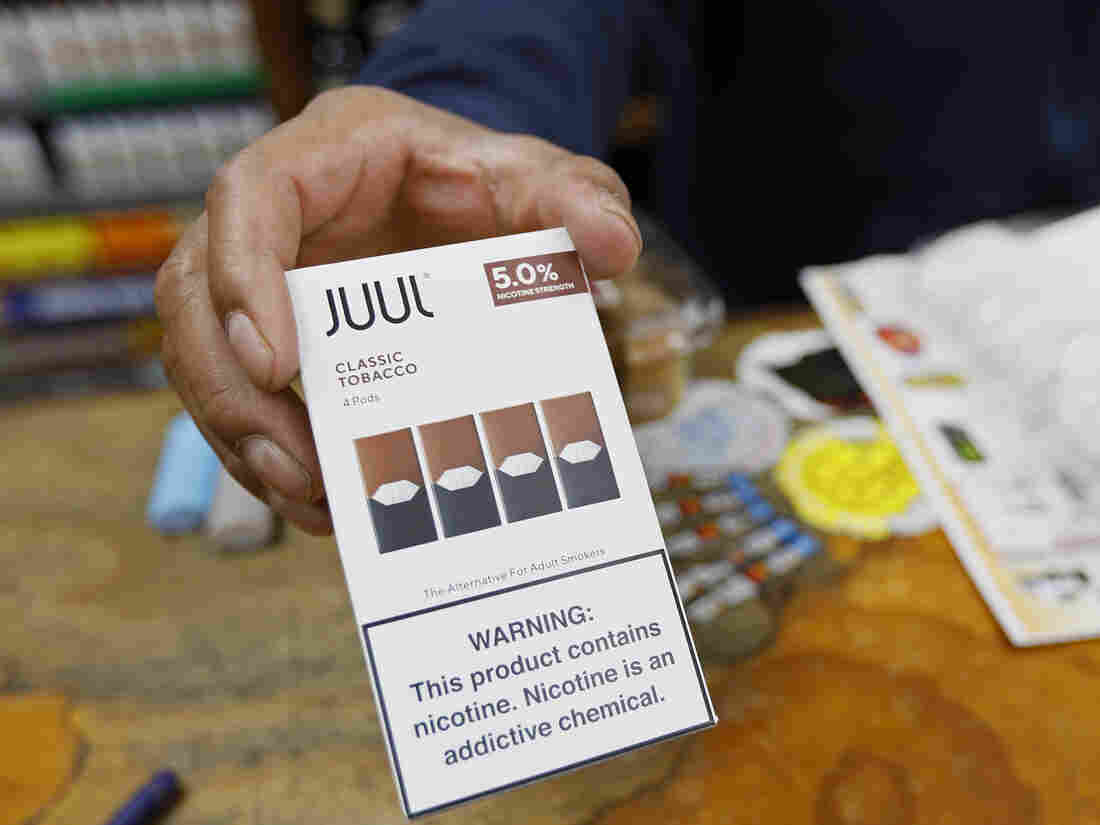 Juul announced that its CEO is stepping down and the company will stop advertising its popular vaping products. The announcements come as regulators work on new rules to curb the use of flavored vaping products among young adults. Samantha Maldonado/AP hide caption 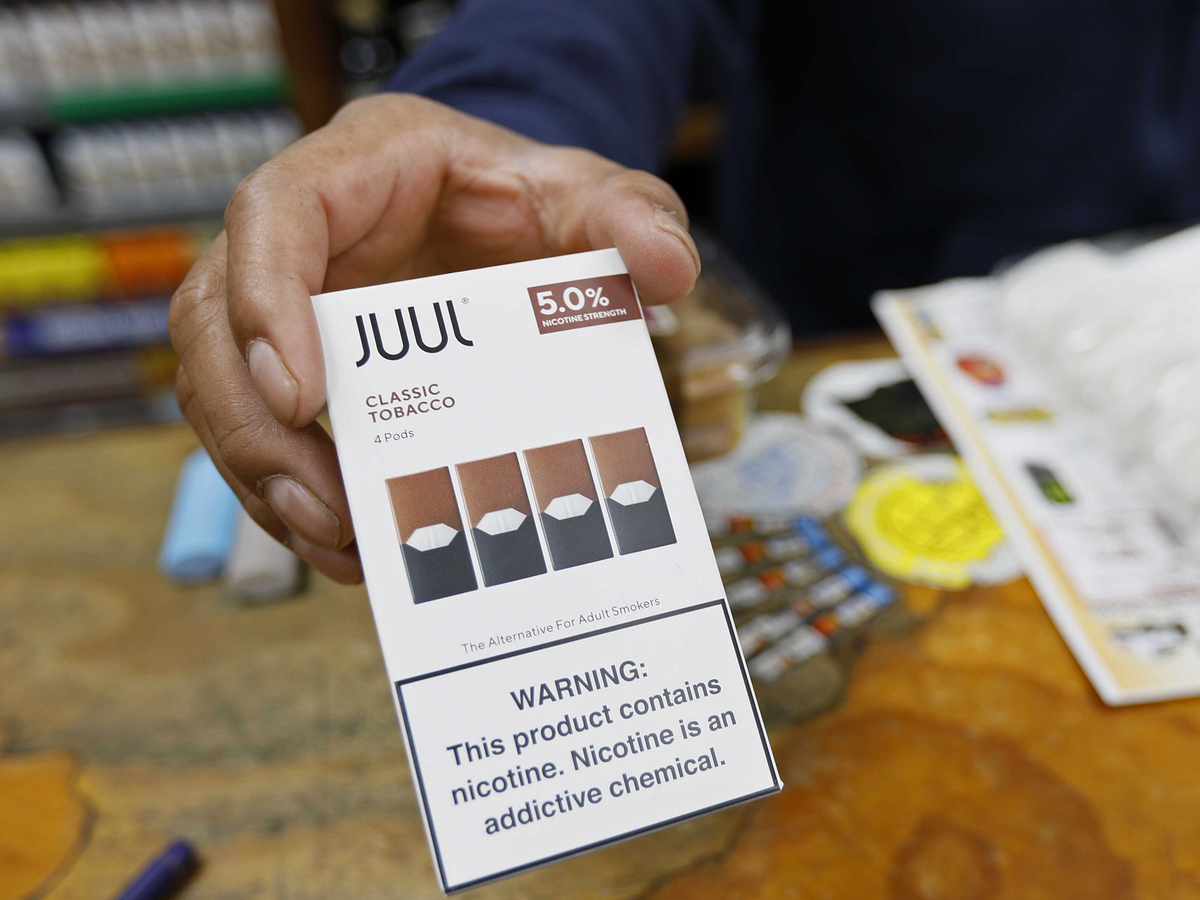 Juul announced that its CEO is stepping down and the company will stop advertising its popular vaping products. The announcements come as regulators work on new rules to curb the use of flavored vaping products among young adults.

Juul Labs has agreed to stop advertising its popular e-cigarettes in the United States and announced that its chief executive officer is stepping down as state and federal regulators examine hundreds of cases of people who are sick from what appears to be a vaping-related lung disease.

The company also said in a Wednesday statement that it will not push back on a Trump administration plan to pull flavored e-cigarettes from the market until the controversial products win approval from federal regulators.

In the statement, Juul officials said the company will be "refraining from lobbying the administration on its draft guidance" that proposes banning fruit-flavored vaping products, unless approved by the Food and Drug Administration, in an attempt to make the e-cigarettes less available to young consumers.

News of the departure of Juul's CEO, Kevin Burns, was accompanied by an announcement that merger discussions have been called off between Philip Morris, the maker of Marlboro cigarettes, and Altria, the tobacco giant that owns a 35% stake in Juul.

Burns will be succeeded by K.C. Crosthwaite, the chief growth officer at Altria.

In a statement, Crosthwaite said vaping products originally were introduced to move adult smokers to a safer alternative. But hundreds of cases around the country of mostly young users experiencing a mysterious breathing ailment thought to be tied to vaping is raising new alarms.

He said the company's original mission is at risk "due to unacceptable levels of youth usage and eroding public confidence in our industry. Against that backdrop, we must strive to work with regulators, policymakers and other stakeholders, and earn the trust of the societies in which we operate," Crosthwaite said.

Flavored e-cigarettes represent the majority of Juul's sales, but analysts have said the company's decision to stop fighting the Trump administration's regulations might fend off an even bigger blow to the company: the federal government banning Juul from selling any of its products.

At least 530 people in 38 states have been sickened with a vaping-related lung disease, and nine people have died. Health experts are also concerned about long-term pulmonary issues from vaping.

Yet health experts have not tied the outbreak to any specific product or type of e-cigarette. Many cases of the mysterious respiratory illness are connected to people who have used e-cigarette products to vape marijuana bought on the black market.

States including Massachusetts, New York and Michigan have moved to ban the sale of vaping products, and attorneys general in a number of states, including Illinois, are investigating whether Juul violated consumer protection laws by marketing its products to teenagers younger than 18.

Ned Sharpless, the acting FDA commissioner, told a subcommittee of the House Energy and Commerce Committee on Wednesday that the Trump administration's soon-to-be finalized policy of banning flavored vaping products could change if e-cigarette companies can win federal approval.

"This policy would not mean that flavored e-cigarettes could never be marketed," Sharpless said. "If a company can show through an application to FDA that a specific product meets the standard set forth by Congress, then the FDA would authorize" the sale of the products, he said.

During the hearing, Rep. Joe Kennedy, D-Mass., asked if the surge in vaping-related illnesses represents "a massive regulatory failure." Sharpless conceded that the federal government missed some important warning signs.

Data from the National Institute on Drug Abuse found that the percentage of teenagers who are vaping doubled in the past two years, with about 1 in 4 high school students using e-cigarettes in the past month. That has led the institute's director, Nora Volkow, to declare vaping "a public health crisis."

"These products introduce the highly addictive chemical nicotine to these young people and their developing brains, and I fear we are only beginning to learn the possible health risks and outcomes for youth," Volkow said.

The FDA is set to release its policy restricting the sale of flavored vaping products in the coming weeks.

For its part, Juul has taken steps to combat the selling of its products to minors, including requiring some retail stores to electronically verify government-issued ID before allowing someone to buy its products.

But critics of Juul have accused the company of deliberately targeting young people by marketing flavors including mango, cucumber and mint.

The FDA's office of criminal investigations is currently probing products that are reportedly making people ill.

"FDA is not pursuing any actions associated with personal use of any vaping products, our interest is in the suppliers," Sharpless told Congress on Wednesday. "But to be clear, if we determine that someone is manufacturing or distributing illicit, adulterated vaping products that caused illness and death for personal profit, we would consider that to be a criminal act."