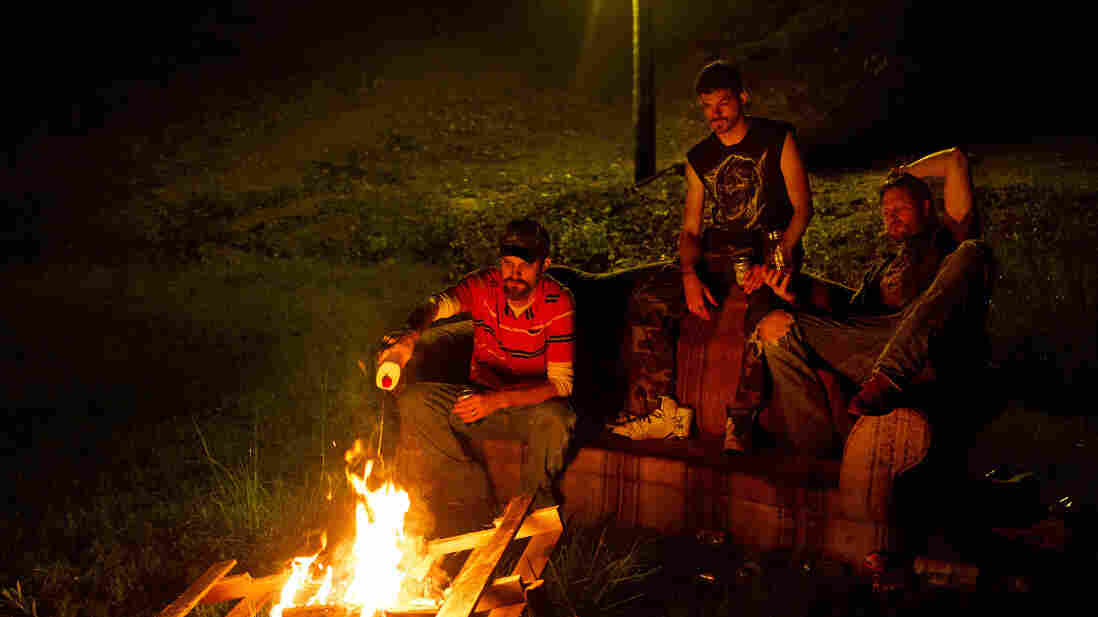 In a small Alabama town where everybody is in everybody's business, Zeke (Andre Hyland, right) and Earl (Michael Abbott Jr., middle) scramble to hide how their bandmate died. Jonathan Purvis/A24 hide caption 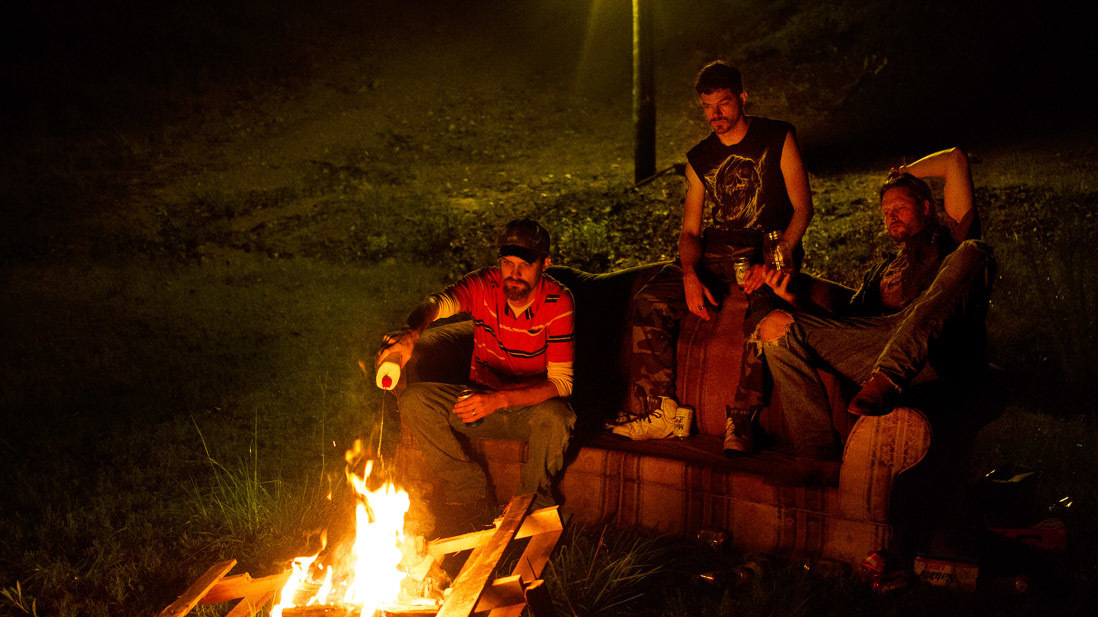 In a small Alabama town where everybody is in everybody's business, Zeke (Andre Hyland, right) and Earl (Michael Abbott Jr., middle) scramble to hide how their bandmate died.

Covering up a crime is hard work when you do everything half-assed. The Death of Dick Long, a gnarly new dark comedy about some misbehaving adult boys in Alabama, imagines what would happen if the dumbest people alive wound up with a dead body on their hands.

The film's endless chain of bad human behavior is both self-incriminating and deeply taboo. It's like if the Coen brothers ran into John Waters somewhere south of the Mason-Dixon, and it manages to be surprisingly sweet in the process. But too often Dick Long feels lumpy and formless, jammed with repetitive scenes and narrative shortcuts — a sort of half-hearted shrug that suggests the movie learned the wrong lessons from its ill-prepared antiheroes.

The opening credits are a slo-mo buffet of unchecked male energy. Three dudes, bandmates in a garage act, take a break from "practice" to shotgun beers and shoot off fireworks from their crotches. Then we smash cut, Reservoir Dogs-style, to the end result of this clowning: one of the three musketeers bleeding out in the car, until the other two can frantically dump him outside an emergency room. They escape before they can be apprehended, naively believing they'll just return to their lives as normal until it all blows over.

How exactly Dick Long died is the big reveal, and in terms of shock value, it will not disappoint. The real meat of the story is how his death triggers other buried secrets about what these guys get up to in their abundant spare time, and how the other two goobers cope with their inevitable unraveling.

Zeke's sidekick Earl (Andre Hyland), a mumbling loner in a bowl cut, is mildly better at keeping things together, probably because he has less of a life to lose out on. But collectively the two of them are terrible liars and even worse improvisers, the sort of bros who try to dispose of a bloody car in a local pond without first checking the depth of said pond. Even the slowpoke small-town cops won't be in the dark for long.

First-time screenwriter Billy Chew and director Daniel Scheinert (one half of the directing team Daniels, which helmed several bonkers music videos as well as the farting-corpse comedy Swiss Army Man) have buried something halfway meaningful under all the idiot-pervert jokes. When Zeke and Earl try to cover their tracks by awkwardly ignoring direct questions, they're not so much criminal masterminds as they are just trying to childishly wish away all the bad things in their lives. Cinematographer Ashley Connor shoots her subjects in a more nuanced, soft light than all the ribaldry seems to demand, helping them become human beings instead of just the butts of one long joke. It's a neat trick: The more pathetic and irredeemable these guys become, the more sympathy the film manages to find for them.

Dick Long often doesn't seem to know what it's doing from scene to scene, and it's hard to say if that's by design. At its core the film isn't a caper, but a eulogy for a certain kind of mood. It's waving goodbye to empty dudebro posturing and responsibility-dodging, what folks these days like to call "toxic masculinity": the kind of behavior that in the real world has caused harm everywhere from frat houses to Wall Street. Here, though, widows and disappointed daughters aside, the toxicity mostly infects its practitioners. Maybe that's why we come to care so much about some guys who seem to make the wrong decision every chance they get. Society doesn't take too kindly to their brand of horsing around.