Accessibility links
Review: 'Between Two Ferns: The Movie' Is More Than Celeb Cameos The Between Two Ferns movie that dropped last week on Netflix expands on the Web series' proven formula, but its sheer joke density rewards repeat viewings.

6 1/2 Reasons 'Between Two Ferns: The Movie' Defies The Sketch-Into-Movie Curse

6 1/2 Reasons 'Between Two Ferns: The Movie' Defies The Sketch-Into-Movie Curse 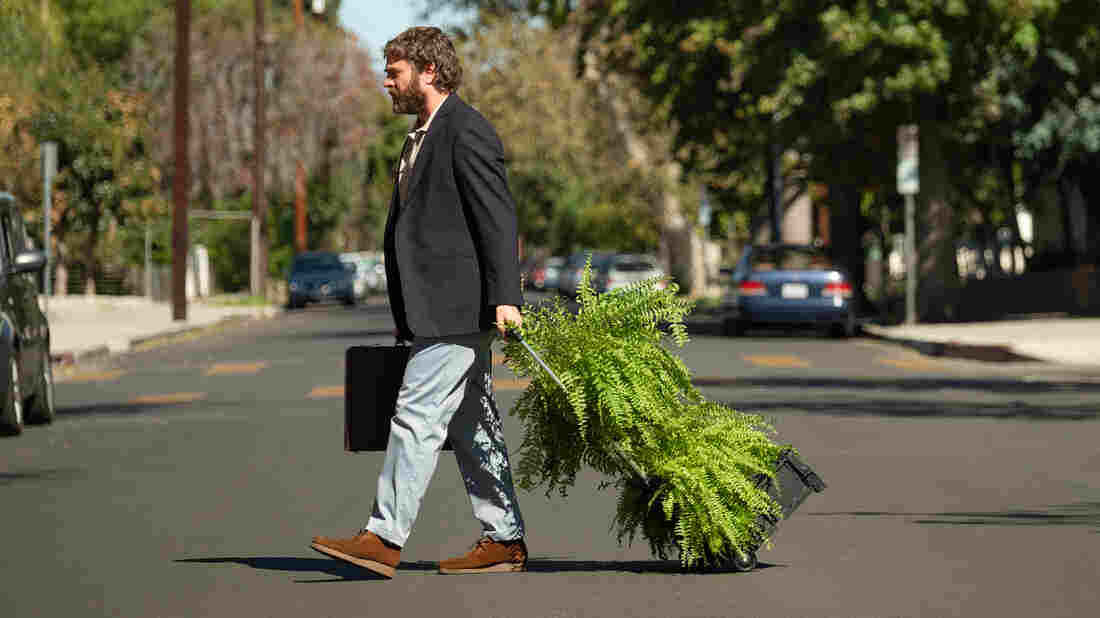 Based on the Funny or Die Web series, Between Two Ferns: The Movie sees Zach Galifianakis embarking on a road trip packed with celebrity cameos. Adam Rose/Netflix hide caption Based on the Funny or Die Web series, Between Two Ferns: The Movie sees Zach Galifianakis embarking on a road trip packed with celebrity cameos.

The premise was simple. Clean. Direct. If one were feeling uncharitable, one might even say thin.

The celebrities were A-list: Brad Pitt, Natalie Portman, Bradley Cooper, Steve Carell. The setting was distinctly D-minus-list: two chairs, a black background curtain, and two large ferns. Everything about it — the harsh lighting, the static camera, the blocky, frequently misspelled chyrons — was meant to evoke the lawless frontier of public access television, where both Galifianakis and his Between Two Ferns co-creator Scott Aukerman (Comedy Bang Bang) got their starts.

Episodes were brief: a tight three minutes and change in the early going, and later, once they hit the big time with Very Special Episodes featuring Barack Obama and Hillary Clinton, nearly seven.

The news that Netflix would release a Between Two Ferns movie (which dropped on Friday, Sept. 20) caused fans of the Web series to experience that alchemical mixture of excitement and dread that has become the defining mood of this, our current era of ceaseless reboots and relaunches. "It's a great show," we thought, "but it's ... a sketch, basically. And movies made out of sketches tend to ..." and here we fell silent, and lowered our eyes to the floor, and perhaps we turned around in a circle three times and spat, to ward off the curse of It's Pat.

And not just It's Pat, of course, but also A Night at the Roxbury, and The Ladies' Man, and Stuart Saves His Family.

"Now hold up," you say. "What about MacGruber? MacGruber worked. And Wayne's World. And Blues Brothers, after all, come on."

The point is: It is prohibitively difficult to transform a five-minute sketch into a feature-length film. But Between Two Ferns: The Movie manages to pull it off, for 6 1/2 reasons.

The 6 1/2 Reasons Between Two Ferns: The Movie Defies The Sketch-Into-Movie Curse

BTF: TM knows what we want, and wastes no time delivering it. It quickly sets up a rickety plot device that sends Galifianakis and a small group of cohorts on the road, searching for 10 celebrities to interview and thus deliver unto us precisely what the Web series did: celebrities we're used to seeing being fawned over on red carpets instead enduring a passive-aggressive (and sometimes aggressive-aggressive) fileting by a truculent, beardy oaf wearing tube socks under his chinos.

The first such interview, with a sullen Matthew McConaughey, gives us both interviewer and interviewee in fine form, before subjecting them to ... well. You'll see.

Not My Job: Zach Galifianakis Plays A Game Called 'Between Two Derns'

NPR's Fall TV Preview: 19 Shows To Watch Out For

If the movie simply contented itself with delivering those celebrity interviews — if it offered us nothing but A-listers like Brie Larson and Tiffany Haddish looking pained and discomfited under the barrage of Galifianakis goofery — it would seem like little more than a supercut of the Web series. Which would be fine, if less than truly satisfying.

Instead, the film justifies its existence by assiduously creating the world around that sad little set we've come to know so well — firstly, the public access television station of Flinch, the small North Carolina town in which this alternate-universe Zach Galifianakis churns out his show in relative obscurity. We meet his co-workers, who, we learn, regard him with everything from admiration (rare) to outright disdain (common), and he tells us (technically, he tells the documentary crew he has hired to chronicle his life) of his dream — a national talk show.

We meet this reality's version of Will Ferrell, a pompous, coked-out media mogul only too happy to exploit the bumbling host of the small-town public access talk show he has "discovered."

Every additional element isn't simply there to pad the story — they each lend their own comedic weight, which increases the film's narrative momentum. That proves important, and it's something most other movies made from the bones of comedy sketches have failed to execute.

In the early going, the film leans into the mockumentary device, featuring testimonials from Galifianakis' co-workers, but — perhaps owing to the fact that the movie was largely improvised — that familiar narrative infrastructure quickly collapses, and it resurfaces only fitfully as the story unfolds.

Instead, the film depends on the characters — which is to say the improv comedians — around Galifianakis to ground the film, to ablate the interviews' caustic edge of ironic anti-comedy, and find its heart. In doing so, it pulls from the company of actors who've appeared on Aukerman's Comedy Bang Bang podcast and (late, lamented) television series (Lauren Lapkus, Ryan Gaul, Paul Rust, a blink-and-you'll-miss-him Paul F. Tompkins) as well as newish faces like Jiavani Linayao, as a boom operator named ... Boom Boom.

The celebrities featured in the film's interviews gamely play along, some more entertainingly than others, and this variance lends these segments, and the film around them, a satisfying texture.

The core team that Galifianakis takes with him on the road — earnest assistant Carol (Lapkus), surly camera operator Cam (Gaul) and warmly empathetic Boom Boom (Linayao) are given sufficient screen time to play off Galifianakis' not-quite-one-note vain witlessness. This allows the nature of their respective relationships to him to grow and change, slightly.

Meanwhile, certain celebrity interviews work to serve the larger story even as they supply the yuks. David Letterman becomes a kind of reluctant (deeply reluctant) mentor, and Peter Dinklage supplies the film with a key plot development that propels it into its third act.

I know I already mentioned Lapkus above, but her contribution here deserves a special shout-out. As Galifianakis' concerned assistant Carol, she provides the film with its much needed emotional throughline — without her, the whole affair would soon devolve into glib silliness. Or more precisely: into nothing but glib silliness.

Now of course, hers is an outsize, performative sincerity, but in the face of the movie's sustained archness, she provides us with someone to root for during the quiet, surprisingly emotional moments.

Also? Not for nothing? Her opening bit with the iMac is such a dumb, good joke.

82 minutes! Just enough! Not too much!

And so we arrive at the true secret of Between Two Ferns: The Movie's singular success — the thing it knows that other sketch-into-movies (with the notable exception of MacGruber) did not.

The sheer onslaught of stupid, silly, dumb, witless jokes serves twin purposes: It keeps us watching, and laughing, instead of checking our phones; and it ensures that BTF:TM rewards repeat viewings.

Now: Critics who write about comedies are sorely tempted to give away some of their favorite jokes. It's understandable, inasmuch as it provides readers with a palpable sense of the shape and tone and quality of the humor under review. But I'm both a critic and a comedy nerd, and when it comes to reviewing comedies, the latter aspect prevails; I bend over backward to avoid spoiling jokes, which are best experienced fresh.

But given the sheer number of good, solid, very dumb jokes in Between Two Ferns: The Movie, I feel confident that I can list, with a certain amount of deliberate obfuscation, those jokes so good they managed to elicit in me a bark-laugh, upon repeated viewings, every single time:

One last thing: The closing credits include outtakes from the film's celebrity interviews, including several instances of Galifianakis breaking into laughter — and breaking character — over the cruelty of the question he just posed. It's fascinating, and very funny, but it completely punctures the entire conceit. Be warned.