Accessibility links
Review: 'The Good Place' Returns For Its Final Season The fourth and final season of NBC's audacious comedy about the afterlife starts on Thursday night, and it's got demons, memory loss and a whole lot more. 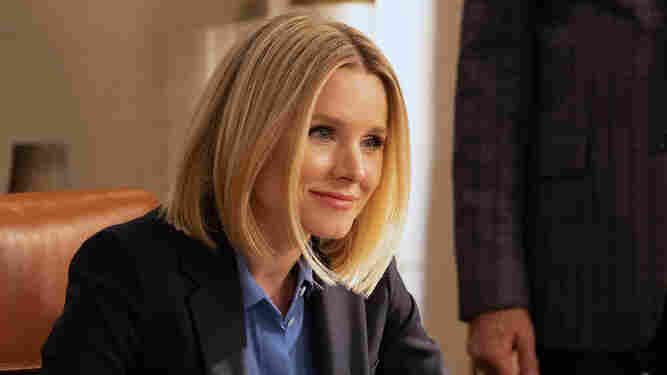 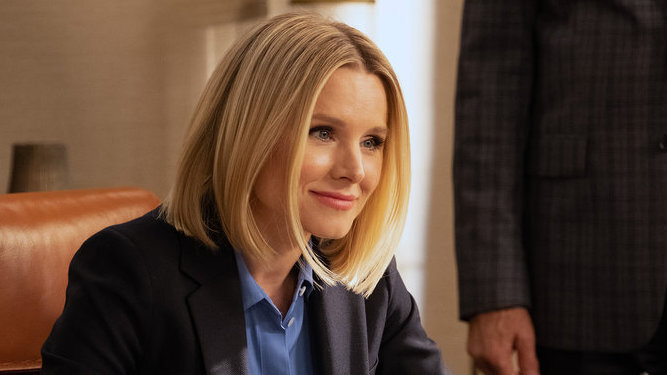 Kristen Bell plays Eleanor, who's stepping up this season on NBC's The Good Place.

[This piece contains spoilers about the first three seasons of The Good Place but treads very carefully with anything about the new season. If you aren't caught up with the earlier seasons, go catch up!]

In the fourth (and final) season of NBC's The Good Place, which debuts Thursday night, the show has arrived at the heart of the matter — or matters — even though you'd be forgiven for finding the details a little confusing. Let's recap a moment.

Each season has had a frame: The first season found Eleanor (Kristen Bell) in the Good Place, where she believed she was an accidental impostor who didn't belong, and she tried to become good enough to fit in. The second season dealt with the fallout from the revelation that Eleanor was not in the Good Place at all, and that Michael (Ted Danson), the man she'd thought was a kindly guide to the afterlife, was actually a demon who had been torturing her and her friends. The third season got very complicated — probably overly so, somewhere around the epic bar fight — but it ultimately led to Michael's discovery that no one was getting into the real Good Place anymore, because every decision humans made in their lives had so many unintended consequences. The complexities of the world, Michael learned, meant that the simple decision to buy a tomato contributed to climate change, the exploitation of labor and the release of pesticides. Thus, even those who meant to be good found it almost impossible. Michael argued that this meant the afterlife was judging them unfairly.

The fourth season finds Michael, Eleanor, Chidi (William Jackson Harper), Tahani (Jameela Jamil), Jason (Manny Jacinto) and Janet (D'Arcy Carden) running an experiment designed to test Michael's hypothesis. They want to find out whether humans who are freed from all those earthly complications in the afterlife, as Eleanor and her friends were, have a natural tendency to become better, as Eleanor and her friends did. In other words, they want to learn whether people's general tendencies toward goodness are being restrained by the realities of contemporary life.

The experiment brings four new people to what they are told is the Good Place (it's actually a neighborhood in neutral territory), where the team hopes that they'll improve from the way they were on earth. If they do, it will prove that even for humans with basic goodness in their makeup, it's almost impossible to be individually ethical because we've created such unethical systems. Daily decision-making has been swamped by economic and political might that ordinary people can't access, and only when that eases can people make truly moral choices.

Or anyway, that's the theory. Of the characters on this network comedy.

This has always been the challenge and the delight of The Good Place. On the one hand, it's setting up these extraordinarily complicated questions (Chidi is a professor of moral philosophy, which gives the writers a vessel to speak directly about, say, moral particularism or utilitarianism). But on the other hand, it's doing a lot of fart jokes and showing you Ted Danson flossing (that's the dance, not the ablution). It's perhaps more riddled with puns than anything on TV, particularly when it comes to food and restaurants (one version of the afterlife hosted a restaurant called Knish From A Rose). Its demons casually drop wildly colorful descriptions of various ways people are tortured in the Bad Place (they'll mention, say, "mouth fleas" or nostrils full of wasps). Visual effects suddenly encase characters in cocoons, or create fantastic creatures, or trap someone inside a marble.

It's somehow among both the silliest and the most ambitious shows on network TV, and it's not surprising that it has a tendency to get a little in the weeds. That's particularly true as the story has broadened to include the world of demons headed by the evil Shawn (Marc Evan Jackson), the judge (Maya Rudolph), the love stories of Eleanor and Chidi and Jason and Janet, multiple trips back and forth between the afterlife and earth, and hundreds of reboots that erase characters' memories. The more the wider story has sprawled, the more it has seemed like a confusing backdrop for the show's strongest moments, which are generally smaller and simpler scenes that don't require perfect recall of a history this multidimensional. That, or the formally bold pieces like the episode where Carden played all the characters as different Janets. That one was a feat of acting, but if I tried to tell you what happened in it or what the rules were, I'd probably get lost pretty quickly. In other words, as great as this show is, it's probably about time to bring it in for a landing before we wind up on Jupiter or in the 1800s or inside the body of a shark.

The second and the third seasons started with a little bit of table-setting, and the fourth does, too. With the erasing of Chidi's memory at the end of last season (necessary for the experiment, for reasons it would take many more words to recap), Eleanor is coping with the fact that she knows him as her boyfriend while he doesn't even remember that they've ever met. Meanwhile, the early episodes have to introduce us to the remaining participants in the experiment and offer some clues about whether they're likely to improve in the afterlife as the team hopes they will.

The challenge of all these memory wipes and reboots — which lead to some of this repeated table-setting we're talking about — has always been that they can reduce the stakes of everything that's gone before. Presumably, in the show's universe, Eleanor and Chidi don't remember the way we originally saw them meet. They don't remember anything that happened in that first season or the way they first figured out what was up with Michael, which raises the very fair question of whether all that really mattered. Or, by some definitions, really happened. It can be hard to put together which of Eleanor's experiences that we've seen on the show she currently remembers — which ones are really part of her current story. For someone who watches the show casually, instantly calling to mind where Eleanor's memories currently start might be a challenge.

Ironing out those complexities is not the most important thing that's left for these characters. My hope — and my hunch — is that as this season progresses, you'll see the focus narrow again. It won't just end with the success or failure of this experiment; the story will be drawn back to the essential questions of what it means to be good, and what it means to be good to others. Boldly and directly, it's a show that's always been about big questions and what matters. As the fourth season starts, there is a little bit of chaos-wrangling going on, but to jump ahead just a tiny bit, by the end of the second episode of the final season, you'll begin to see that they've still got a handle on who these people are, and why they've been so much fun to be with.