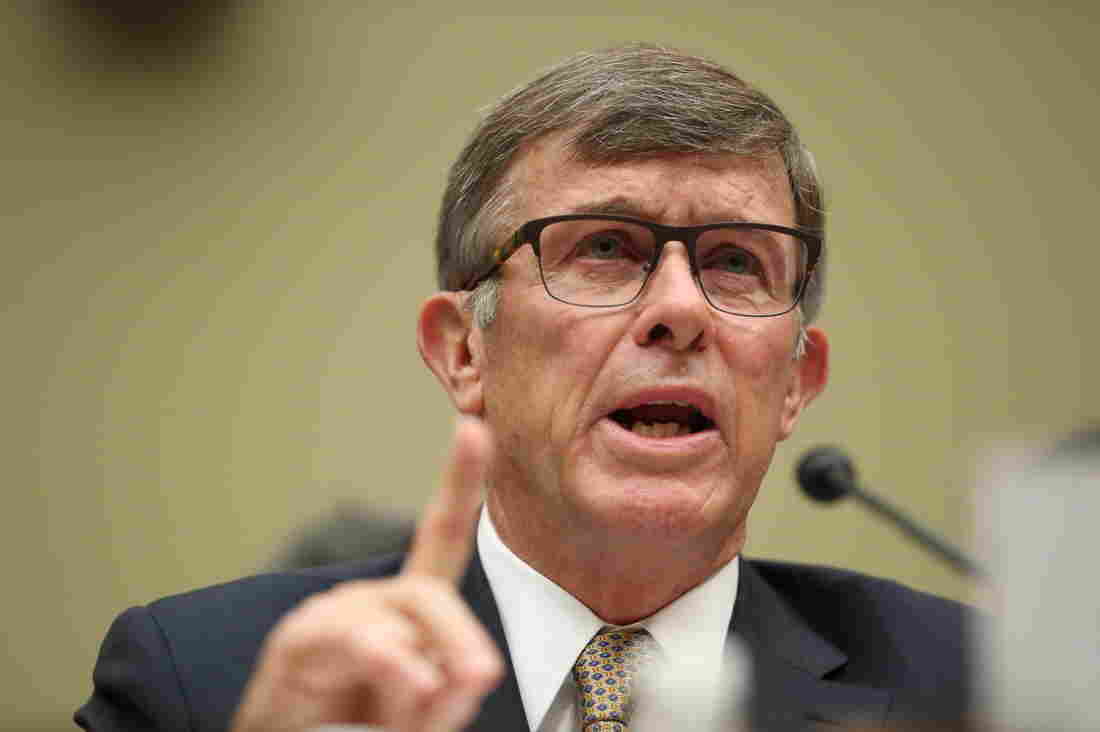 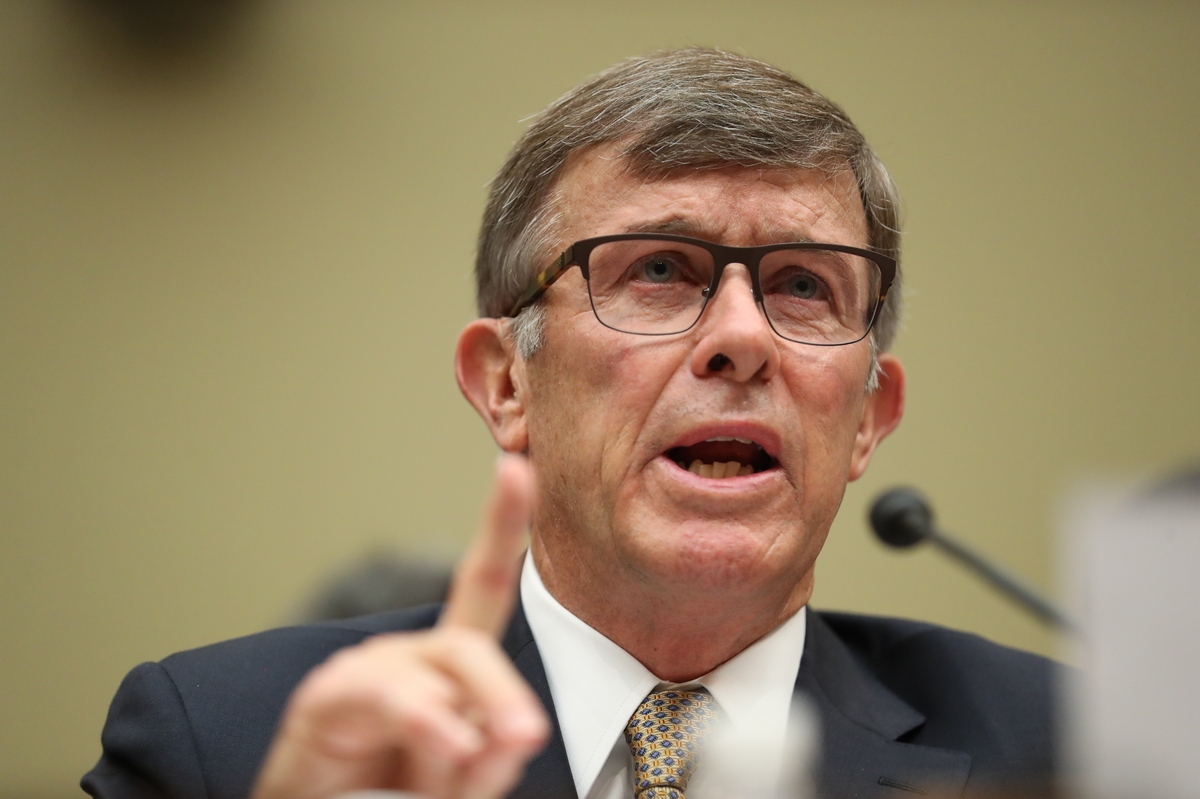 The nation's top spy told lawmakers on Thursday that he supports the whistleblower whose complaint sparked the Ukraine affair but said he struggled to deal with how to handle the case inside the Trump administration.

Acting Director of National Intelligence Joseph Maguire told the House intelligence committee in an open hearing that he believed the whistleblower and the spy world's inspector general had acted in good faith and that he has tried to handle a unique situation as best he could.

"I believe that this matter is unprecedented," Maguire said.

He stopped short of characterizing the conduct by President Trump described in the complaint and in a partial transcript released on Wednesday of a phone call between Trump and the president of Ukraine on July 25 — in which Trump asked his counterpart to investigate the family of former Vice President Joe Biden.

Maguire said he did not want to get into the middle of the political battle: "I am not partisan and I am not political," he said. "I believe in a life of service and I am honored to be a public servant."

But once the complaint reached him, Maguire said the White House counsel's office said the documents appeared to involve executive privilege, which he said was beyond his power to resolve — and which might mean Maguire couldn't give the documents to Congress.

Later, the Justice Department also opined that the documents didn't qualify under the law to be forwarded to Congress.

Even so, when Intelligence Community Inspector General Michael Atkinson told Maguire that he felt compelled to tell Congress about the complaint, without revealing what it contained, Maguire said he agreed.

WH 'Locked Down' Ukraine Call And May Have With Others, Whistleblower Charges

"It is not, perhaps, on the timeline I would have desired, Mr. Chairman, or you," Maguire said to Adam Schiff, D-Calif., chairman of the intelligence committee.

But ultimately, Maguire said he believed the process has been followed correctly.

"I believe the whistleblower did the right thing," he said.

Ultimately the complaint was revealed on Thursday via the House intelligence committee, following the release on Wednesday of the White House's account of President Trump's call with the president of Ukraine.

Schiff pressed Maguire as to why he approached the White House about the complaint when it, and Trump, were the subjects of that very complaint. And Schiff also asked why Maguire asked the Justice Department for legal advice even though Trump's conversation also invoked Attorney General William Barr.

"That this whistleblower was left twisting in the wind for weeks, and has been attacked by the president, should concern all of us," Schiff said.

The chairman also stressed that he believes there's no ambiguity under the law and Maguire and his aides atop the intelligence community have no choice but to give Congress complaints like these.

Maguire said the executive privilege aspects of the complaint meant he had no choice, and that as an executive branch official he also was bound by the opinions issued by the Justice Department's Office of Legal Counsel.

He sought to stress that this situation is unusual and that he has been trying to do his duty.

"This was not swept under the rug," Maguire said.

Temperature rising in the capital

The House hearing was watched closely in a capital roiling after House Democrats reached a new consensus this week about moving ahead with an impeachment inquiry — although no one knows what that may mean in practical terms or whether it will bring real consequences for Trump.

Existing investigations led by House Democrats will continue but the Republican-controlled Senate remains largely behind the president.

But one big question raised by this week's events was whether the action in the House and the revelations from this week might move any of Trump's allies in the upper chamber.

Key Senate moderates said earlier they were waiting for facts to come through official channels, as in the testimony and documents that are now public, before making up their minds.

Trump Asked Ukrainian President For 'A Favor' On Biden; DOJ Says No Charges

At the same time, many of Trump's allies, as exemplified by Sen. Lindsey Graham, R-S.C., have remained stalwart in their support of the president.

Wow. Impeachment over this?

What a nothing (non-quid pro quo) burger.

Democrats have lost their minds when it comes to President @realDonaldTrump.

Acting DNI in the spotlight

The saga began with a complaint to Atkinson, the intelligence community's internal watchdog, about allegedly improper commitments made by President Trump to a foreign leader.

The complaint was later released by the House intelligence committee; read it here.

That led, on Wednesday, to the extraordinary release by the White House of the account of a call in which Trump asked Ukraine's president to investigate the family of former Vice President Joe Biden.

Maguire vowed before the hearing, in general terms, that he will do his duty in handling the Ukraine affair — but he also denied a press report on Wednesday that he had threatened to resign if he was constrained from talking with lawmakers.

Maguire found himself in the job following Trump's removal of the Senate-confirmed former DNI, Dan Coats, and the resignation of his deputy, Sue Gordon.

There is no word as to when the White House might nominate their full-time replacements.

So in the meantime, Maguire is caught in the midst of the latest contretemps involving Trump, the intelligence community and a foreign government. He stressed that he sees himself as outside the political arena.

At the same time, however, the acting DNI acknowledged that the biggest challenge facing the intelligence community faces today is securing American elections — which bears on the issue raised by the Trump phone call with Ukraine's president.

Trump told reporters on Wednesday that he had at least one other phone call with Ukrainian President Volodymyr Zelenskiy, as did Vice President Pence — calls that Trump said were also innocent.

Trump said he was willing to release a transcript of those earlier calls, but he was dismissive about the reaction by Democrats.

"Impeachment, for that?" he said. "When you have a wonderful meeting — a wonderful phone conversation?"

The president stuck by his characterization of what he called the real Ukraine story — one he said was about "corruption" involving Biden, his family, Ukraine and China.

Trump responded to a question about whether his request to Ukraine's leader was improper by charging that former President Barack Obama and conspirators within the U.S. government had persecuted him in the earlier Russia imbroglio.

White House press secretary Stephanie Grisham added on Thursday that the administration has been cooperating all along with revealing the documents at issue in the Ukraine affair — first the partial transcript and then the complaint.

"The president took the extraordinary and transparent steps of releasing the full, unredacted, and declassified transcript of his call with President Zelenskyy, which forms the heart of the complaint, as well as the complaint itself. That is because he has nothing to hide," she said in a statement.

Trump's allies on the intelligence committee complained about what they called Democrats' baseless allegations that Magquire has been a White House toady.

"I want to congratulate the Democrats on the rollout of their latest information warfare operation against the president," he said.

Biden, meanwhile, has denied any wrongdoing and condemned what he called conspiracy theorizing by Trump and the president's supporters.

The former vice president repeated on Wednesday his earlier call that Trump cooperate with Congress' investigations into the Ukraine affair and said that if Trump doesn't, he'll throw his support behind impeachment.

"It is a tragedy for this country that our president put personal politics above his sacred oath," Biden said. "He has put his own political interests over our national security interests, which is bolstering Ukraine against Russian pressure."