Accessibility links
Review: 'The Future Of Another Timeline,' By Annalee Newitz Annalee Newitz's new novel pits a group of time-travelers trying to make the future better for women against a dangerous rival organization inspired by vicious Victorian moralist Anthony Comstock.

'Future Of Another Timeline' Edits The Past To Save The Present

'Future Of Another Timeline' Edits The Past To Save The Present 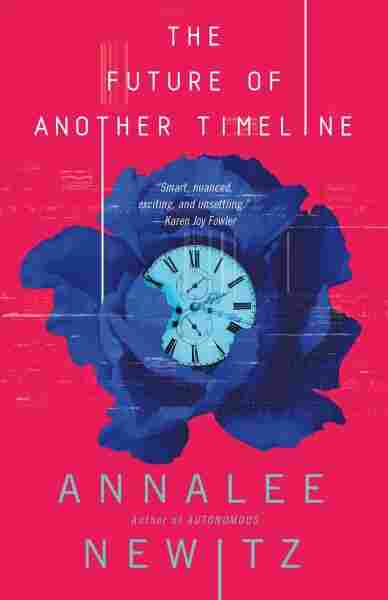 The Future of Another Timeline

Title
The Future of Another Timeline
Author
Annalee Newitz

This is Annalee Newitz's new novel, The Future Of Another Timeline. The basics, anyway. The bones.

"Geologists agreed that the timeline was constantly in flux. Travelers exposed to edits returned with memories of lost histories, previous versions of the timeline they had witnessed ... Every month we had a research meeting at my best friend Anita's house in Brentwood, close to the UCLA campus where we worked. There, we did a lot more than share discoveries and scotch. We made plans to edit history."

There's a girl, Beth. 17 and a suburban punk, living in a spiraling nightmare of abuse, cigarettes, music and murder. There's a woman, Tess. A professional time traveler, geoscientist, secret agent for the Daughters of Harriet (Tubman), who are working to make their future a little less terrible for women. To protect their present from the organized misogyny of a different group, the Comstockers (named for the viciously prudish Victorian morals crusader Anthony Comstock), who want queer women dead, and trans women dead and all women cowed, quiet and consigned to the kitchen while straight white men take their rightful place as rulers of all blah blah blah.

Things get nasty. Get bloody. Get complicated. It's a time travel story — there's no other way they go. It stumbles in the prose sometimes. Gets wrapped up in referential nerdery. But Newitz grounds things in character details and the focused, dual, coordinated concerns of Beth in 1992 and Tess everywhen else. They color (and in some cases spackle over) the science in emotion, using rage and regret and the inherent, workaday oddity of living and working in a universe where time is not a constant to give everything a flow. And then Newitz gives the whole twisty mess a solid driver in an edit war happening between the Daughters and the Comstockers, dropping in right at the point where it starts to get serious. Where the bodies start stacking up.

The "Machines" in this world — the strange geologic wormhole generators — have been around forever. They are archaeological oddities that have been used since the beginning of time. In 2022 (the arguable present), they are less well understood than they were in the past, will be in the future, but there are some rules, structures, conventions. You don't go back and tell yourself anything. Go back to one point too often and the Machines will start rejecting you. You can't kill Hitler. Or rather, you can, but Hitler's friend or cousin or next-door neighbor will just become Führer in his place. The world-building is deft enough that it doesn't feel like out-and-out black-boxing, but not so heavy that it weighs down the story. The academic aspect helps. The dullness of the process. The forms and paperwork. It's a nice touch, deploying bureaucracy as a lampshade like that.

But Newitz isn't content to end with nicely put-together or solidly plotted or any of the other faint-praise bull that generally gets heaped on troped-up genre novels. It's tough enough to write a time travel book that maintains its own internal logic throughout and doesn't descend into a series of ex machina miracles to put a neat bow on the last page, so that's where most writers stop.

But not Newitz. They do the basics, sure. And at the start, it feels like nothing more than that. But then, maybe a third of the way in, you glance back over your (metaphorical) shoulder and see the hundred little fires they have set along the way. You smell the gasoline Newitz has been splashing over everything. You notice the dozens of moments of barely contained rage (artfully overshadowed by the couple absolutely uncontained ones) and you think, wait a minute...

'Another Timeline' is a matryoshka doll meditation on the pointlessness and necessity of violence, dolled up in Doc Martens and hair clips, bathed in pop culture references (real and imagined) and tripping through hundreds of years of misogyny and rape culture.

Another Timeline is a revolutionary novel in that it is about revolutions. Big ones and little ones, violent ones and psychological ones. It is, on the one hand, a starkly feminist piece of contemporary science fiction about the dangers of accessible time travel, the lengths some people will go to in order to enforce their worldview and what it takes to resist. On the other, it is a small, personal story about that urge to go back to your hometown, to find yourself in your worst moment, and explain, somehow, how truly, truly lousy your friends were. How absolutely necessary it is to find the escape hatch in reality. To burn down the past and start over again new.

That Newitz can contain these both inside the skin of a single novel is not genius, it is necessity. The one informs the other — the small story the heart of the larger one and, in a very real way, its past. Another Timeline is a matryoshka doll meditation on the pointlessness and necessity of violence, dolled up in Doc Martens and hair clips, bathed in pop culture references (real and imagined) and tripping through hundreds of years of misogyny and rape culture. It has the rhythms of punk rock, the weird, stuttering speed of nostalgia, fierce bonds of friendship and a hard question strung all the way through it: If your past is your past and the story that brings you unerringly to this moment and the person that you are in it, what risk do you take in changing it? If your past changes, are you still the same person in the present?

And, more importantly, do you want to be?