Accessibility links
Whistleblower Complaint On Trump-Ukraine Call Is Released In a complaint released by the House intelligence committee, the person cites White House officials who say they were ordered to veer from protocol to protect "politically sensitive" information. 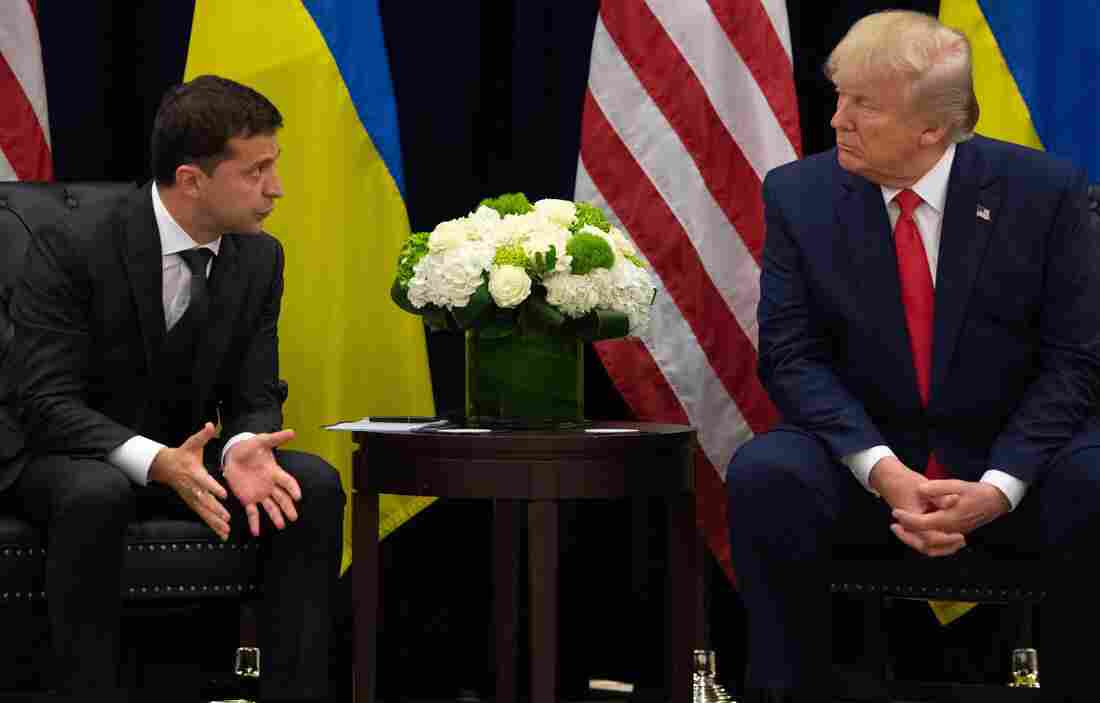 President Trump and Ukrainian President Volodymyr Zelenskiy speak during a meeting in New York on Wednesday, on the sidelines of the U.N. General Assembly in New York City. Saul Loeb/AFP/Getty Images hide caption 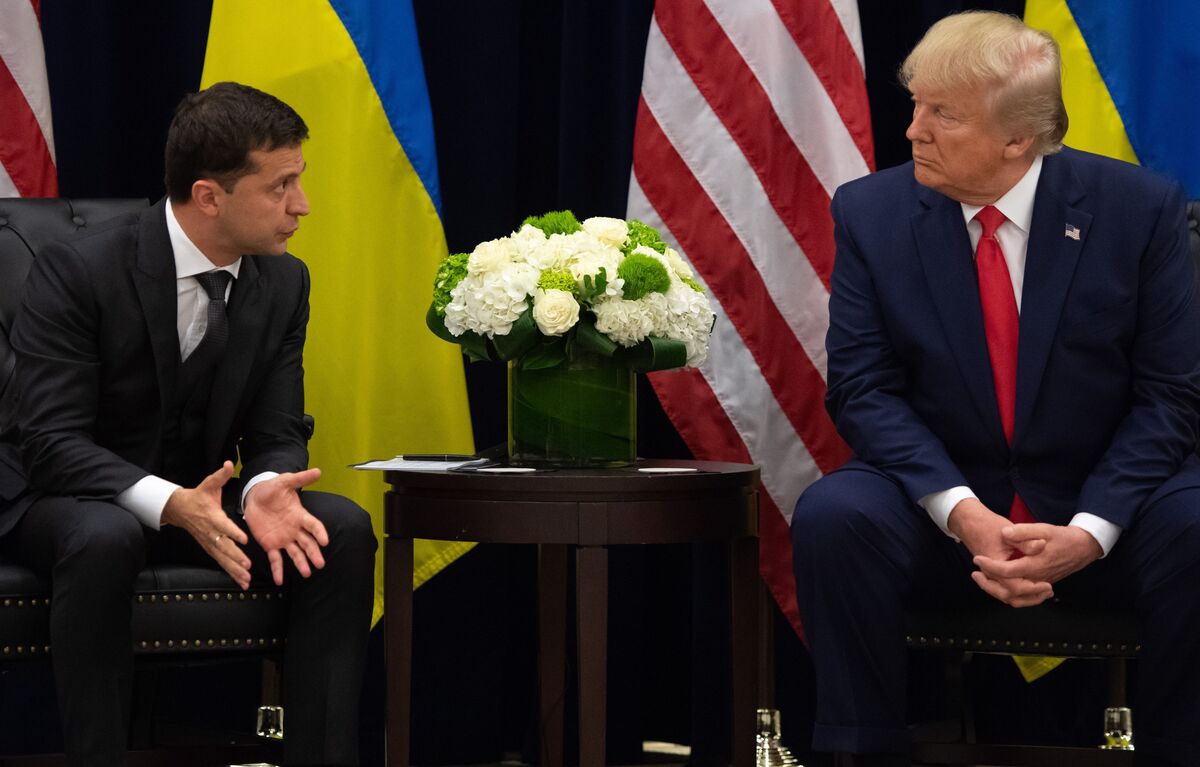 President Trump and Ukrainian President Volodymyr Zelenskiy speak during a meeting in New York on Wednesday, on the sidelines of the U.N. General Assembly in New York City.

A government whistleblower received information from "multiple" officials that President Trump "is using the power of his office to solicit interference from a foreign country in the 2020 U.S. election."

An unclassified version of the whistleblower's complaint, made public Thursday by the House intelligence committee, says that the president's lawyer, Rudy Giuliani, "is a central figure in this effort. Attorney General [William] Barr appears to be as well."

The complaint centers on Trump's July 25 call with the president of Ukraine, an account of which was released Wednesday by the White House. That memorandum shows Trump asking the Ukrainian President Volodymyr Zelenskiy for "a favor" — to investigate potential 2020 rival former Vice President Joe Biden.

What the complaint released Thursday further reveals is that the whistleblower was told by officials that the record of the call was handled differently than other such transcripts. It was placed in an electronic system that is used to store especially sensitive classified information. Also, officials told the whistleblower this was not the first time that such an action had taken place for apparently political, rather than security, reasons.

Trump and the White House dismissed the complaint and stood by the phone call. Democratic lawmakers, meanwhile, have new threads to pursue with an ongoing impeachment inquiry.

What the complaint says

The whistleblower says that during the call, Trump "sought to pressure the Ukrainian leader to take actions to help the president's 2020 reelection bid."

According to the whistleblower, White House officials were "deeply disturbed by what had transpired in the phone call."

The whistleblower said that, according to officials, this "was not the first time" that a presidential transcript was placed into a "codeword-level system solely for the purpose of protecting politically sensitive — rather than national security sensitive — information."

Translation: White House officials added security to restrict the circle of people who might be able to view them.

That is likely to raise questions about just what other information might be so protected relating to Trump's other conversations with foreign leaders.

On Thursday, Trump repeated his characterization of the call with his Ukrainian counterpart as "perfect."

He said Democrats' investigation of the call and related activities "shouldn't be allowed. There should be a way of stopping it. Maybe legally through the courts."

Earlier, Trump harshly denounced those who provided the details of the White House activities pertaining to the call to the whistleblower.

According to an account in the Los Angeles Times, Trump told a private gathering of U.S. United Nations staff Thursday in New York, "I want to know who's the person, who's the person who gave the whistleblower the information? Because that's close to a spy," Trump said.

"You know what we used to do in the old days when we were smart? Right? The spies and treason, we used to handle it a little differently than we do now."

"Threats of violence from the leader of our country have a chilling effect on the entire whistleblower process, with grave consequences for our democracy and national security," the chairmen said in the statement.

The White House issued a statement earlier on Thursday portraying the whistleblower's complaint as unremarkable.

"Nothing has changed with the release of this complaint, which is nothing more than a collection of third-hand accounts of events and cobbled-together press clippings — all of which shows nothing improper," the statement said.

At least one Republican lawmaker disagrees. Rep. Will Hurd, R-Texas, who is not running for reelection next year, wrote this on Twitter:

"There is a lot in the whistleblower complaint that is concerning. We need to fully investigate all of the allegations addressed in the letter, and the first step is to talk to the whistleblower."

There is a lot in the whistleblower complaint that is concerning. We need to fully investigate all of the allegations addressed in the letter, and the first step is to talk to the whistleblower.

House Speaker Nancy Pelosi, D-Calif., said after reading the whistleblower's complaint, "This is a cover-up." Pelosi, who announced the start of formal impeachment inquiry Tuesday called it "a sad week," adding, "This is nothing that we take lightly."

Will Washington hear from the whistleblower?

Although the House and Senate intelligence committees are negotiating with an attorney for the person, whose identity remains unknown, it isn't clear when Congress may talk with the person.

Senate Intelligence Committee Chairman Richard Burr, R-N.C., and Vice Chairman Mark Warner, D-Va., left a closed session with Maguire signaling that they're continuing to gather information, but declining to give a firm timetable.

"This will generate more questions than we asked today, so the next two weeks will probably be spent trying to get answers to those," Burr said. "But we are started in the process — don't expect us to move at light speed — that'll probably happen in the House."

Warner praised the bipartisan nature of the committee, and said that "one of the most important things that came out of today is maintaining the integrity of the whistleblower process. People need to be able to come forward when they've seen incidents of waste, fraud, abuse, or inappropriate behavior and feel like there are not going to be reprisals."

As to whether the whistleblower will appear before the committee, member Sen. Roy Blunt, R-Mo., said he wants to hear from the person, and, "I think we will."

Beyond the whistleblower, the discussions about the actions of State Department or other officials in the complaint offer other threads for members of Congress to pursue.

The whistleblower wrote that "multiple officials told me" that Ukrainian leadership was led to believe that a meeting or phone call between Trump and Zelenskiy would be contingent on whether he "showed willingness to 'play ball.' "

A day after the July call, U.S. diplomats met with Zelenskiy and other Ukrainian political officials. The whistleblower said the diplomats "reportedly provided advice to the Ukrainian leadership about how to 'navigate' the demands that the president had made of Mr. Zelenskyy."

Lawmakers likely want to hear more about how American diplomats dealt with Zelenskiy or other Ukrainians before or after the phone call with Trump.

Separately, around Aug. 2, Giuliani traveled to Madrid to meet with one of Zelenskiy's advisers in what the whistleblower says multiple U.S. officials characterized as "a direct follow-up" to the president's call with the Ukrainian president "about the 'cases' they had discussed."

Earlier, in May, the complainant reports hearing from "multiple U.S. officials that they were deeply concerned by what they viewed as Mr. Giuliani's circumvention of the national security decision-making processes" as he relayed messages "back and forth between Kyiv and the President."