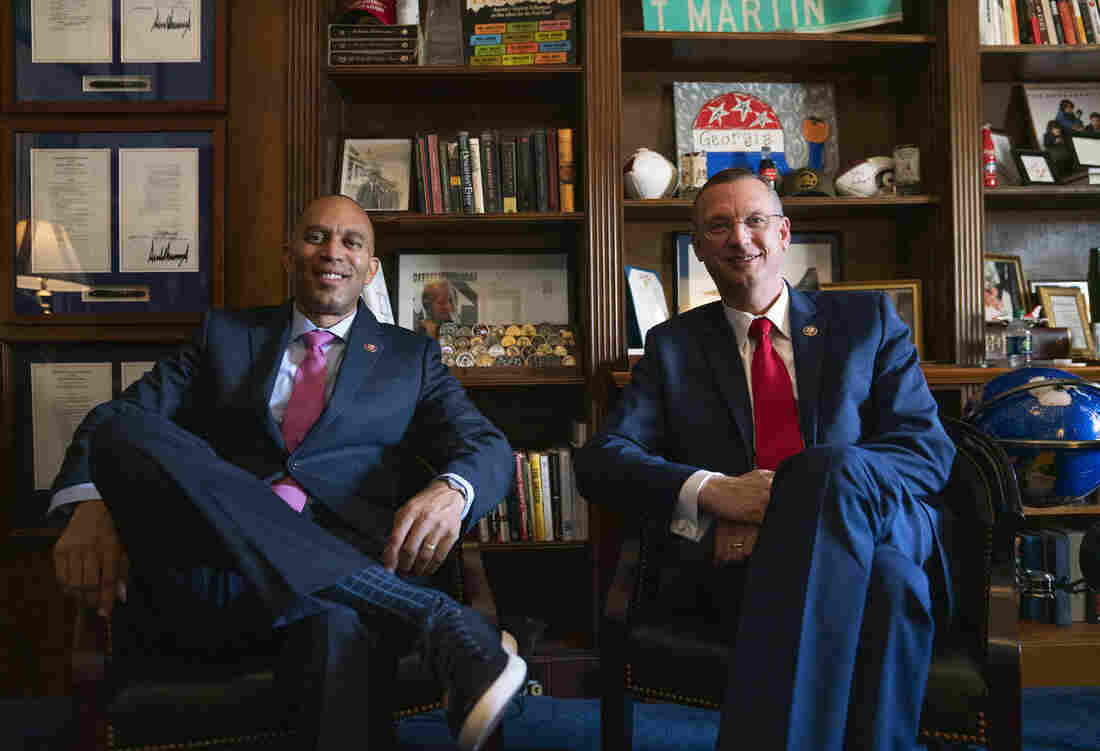 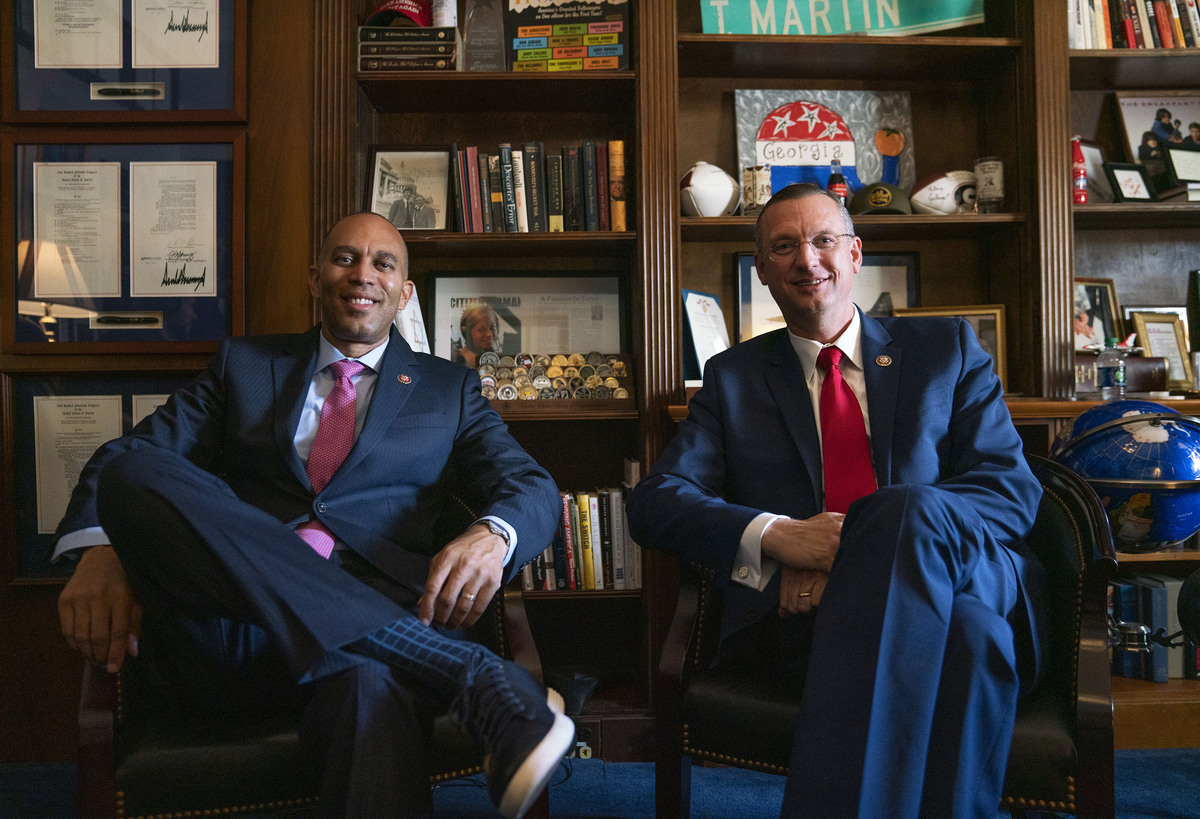 From left, Rep. Hakeem Jeffries, D-N.Y., and Rep. Doug Collins, R-Ga., are receiving the 2019 Civility Award by Allegheny College for teaming up on criminal justice reform.

Jeffries is a Democrat and an avid hip-hop devotee, while Collins is a Republican who favors country music. Jeffries hails from a largely urban New York district, and Collins represents a largely rural pocket much farther south in Georgia.

Yet, somehow this duo found common ground this past year to pass a major policy initiative. And now one of the oldest schools in the country will award them with its Prize for Civility in Public Life.

They sat down with NPR exclusively Thursday, a day before Allegheny College awards them the joint prize at the National Press Club in Washington.

"Game recognizes game," Collins says, signaling Jeffries in a hip-hop reference from his Capitol Hill office. "This man right here. You want to ... partner with him."

"Although I appreciate Doug Collins quoting ... one of the philosophical underpinnings of hip-hop — which is game recognizes game," Jeffries says between Collins' laughs, it "shows you how much game Doug Collins has at the end of the day."

As they sit recounting their bipartisan bond, it's a brief respite from the controversy broiling just outside Collins' office door.

Moments earlier, a whistleblower complaint against President Trump had been released detailing concerns that the White House attempted to lock down transcripts of calls with the president of Ukraine and other foreign officials. That release was followed by hours-long committee testimony of Joseph Maguire, the acting director of national intelligence.

Collins and Jeffries both sit on the House Judiciary Committee, ground zero for an ongoing impeachment inquiry into Trump and on opposite sides of a bitter, partisan fight. Yet, they were able to score a major legislative win this year.

Their first was a bill to protect songwriters in 2013 — and later the two even posted a joint Spotify list of their favorite songs. However, their much tougher work collaboration came with criminal justice reform signed into law in December that helped shorten sentences for some inmates. 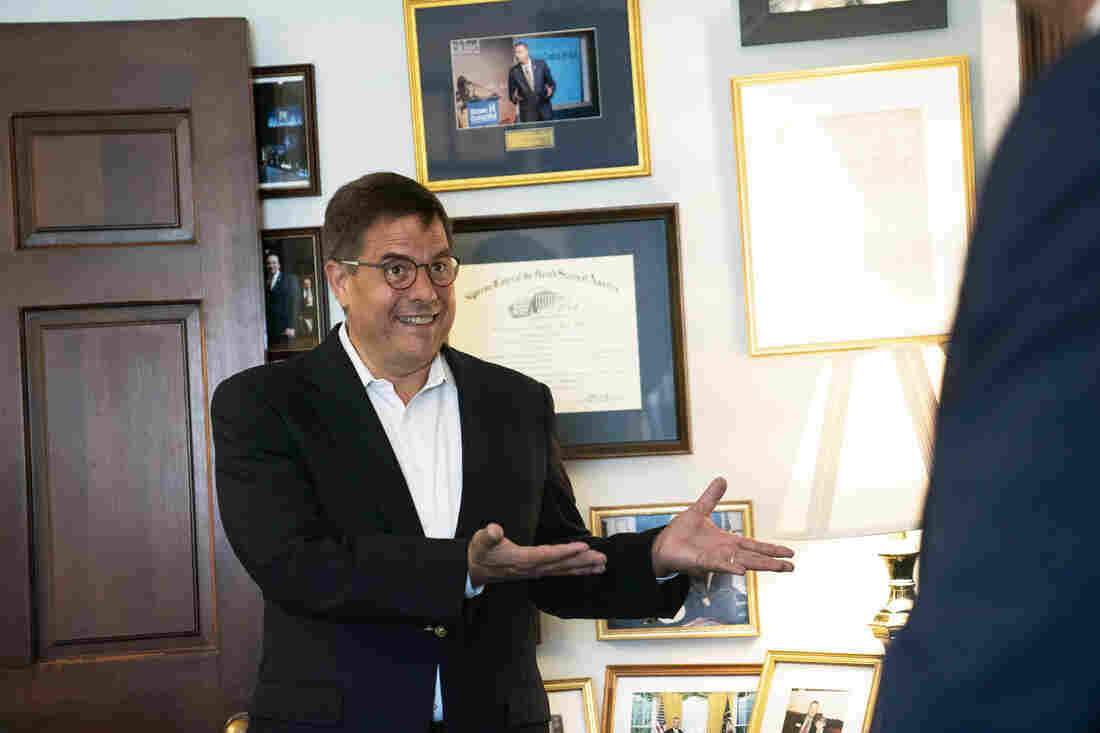 Tim Reeves serves as a member for Allegheny College's board of trustees. Mhari Shaw/NPR hide caption 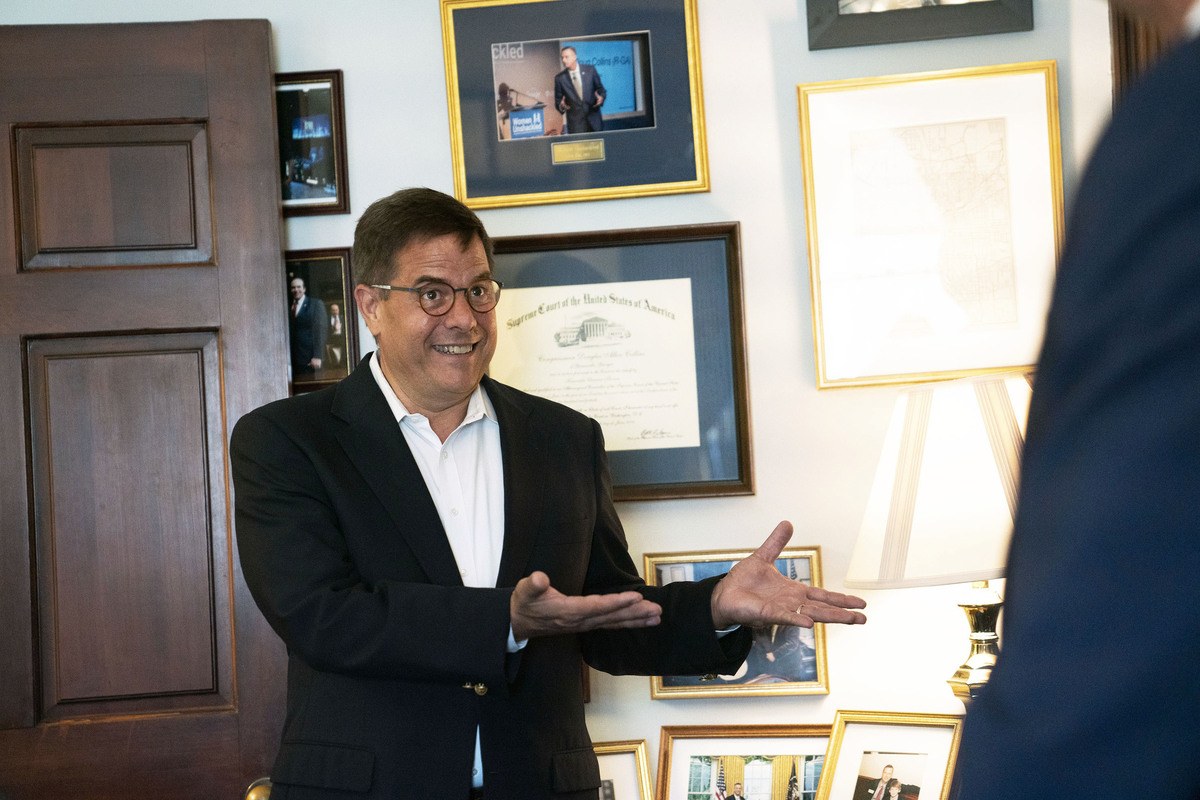 Tim Reeves serves as a member for Allegheny College's board of trustees.

Jeffries and Collins say the prize for that work is a major honor.

"It's reflective of the fact that we were able to come together, which meant leadership from Doug Collins, to get things done and make a difference in the lives of the American people in both criminal justice reform and as it relates to the Music Modernization Act," Jeffries said. "And I was proud to partner with him in that regard."

"They come from drastically different backgrounds, geographic backgrounds, racial backgrounds, political backgrounds and socioeconomic backgrounds. And they know that they stand at very opposite sides of the political spectrum from each other," she said. "But they also know that by finding some form of commonality — whether that's their faith, their taste in music or an appreciation of what the other side for lack of a better term is trying to do — they know that through finding some form of commonality they can overcome those differences to really make a difference for our political landscape and really for the country as a whole."

She says her school found a dramatic decline in students' interests to serve in public life in recent years. Those same students would rather volunteer at a shelter than work in city hall.

And that public service, and corresponding need for civility, must continue to be spotlighted. It is the ninth year the school will issue the award.

"I think what we're trying to do with the civility prize is really draw attention to people who are not falling prey to the incivility and the demonization," Link said, "so that we can present models to our students at Allegheny as well as to anyone else that it is possible to do this and to solve really big issues working with someone with whom you ... may not agree at all."

Collins and Jeffries will follow in the footsteps of previous recipients such as the the late Sen. John McCain and former Vice President Joe Biden, as well as Supreme Court Justices Ruth Bader Ginsburg and the late Antonin Scalia.

They met after joining the same freshman class of House lawmakers in 2013 and serving on the judiciary committee. Jeffries remembers it was Collins who reached out to work together.

And it's that bond that makes this duo think their bipartisan relationship can survive even a bitter, partisan fight over impeachment.

"We are obviously in a very intense hyperpartisan era. But that's not unlike previous moments in American history where there were intense disagreements," Jeffries said. And "the resiliency and the power of American exceptionalism has always gotten us through prior instances of intense internal conflict. And so I'm confident that the same will happen as we move forward."

"If I was no longer serving tomorrow ... the ability that we've had to work together, to get this prize together," he said, "is just one of the pinnacles of my time in public service."

A previous version of this story misspelled the last name of Ruth Bader Ginsburg as Ginsberg.