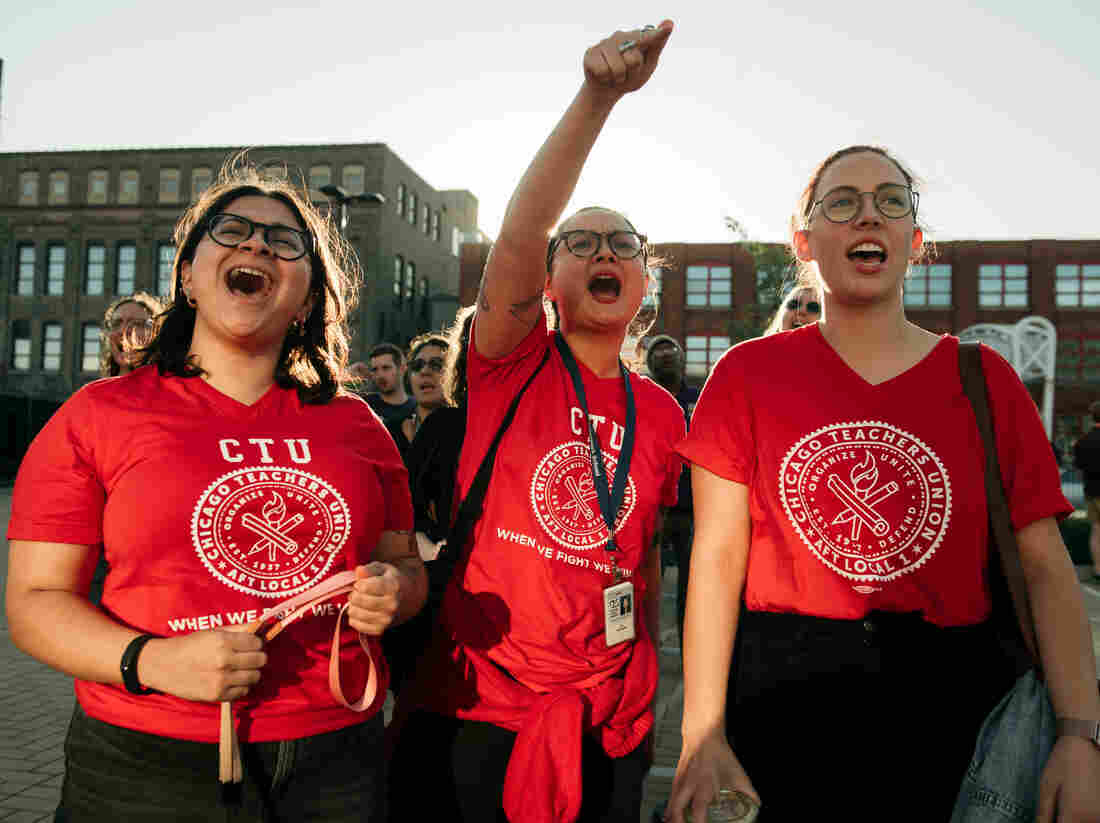 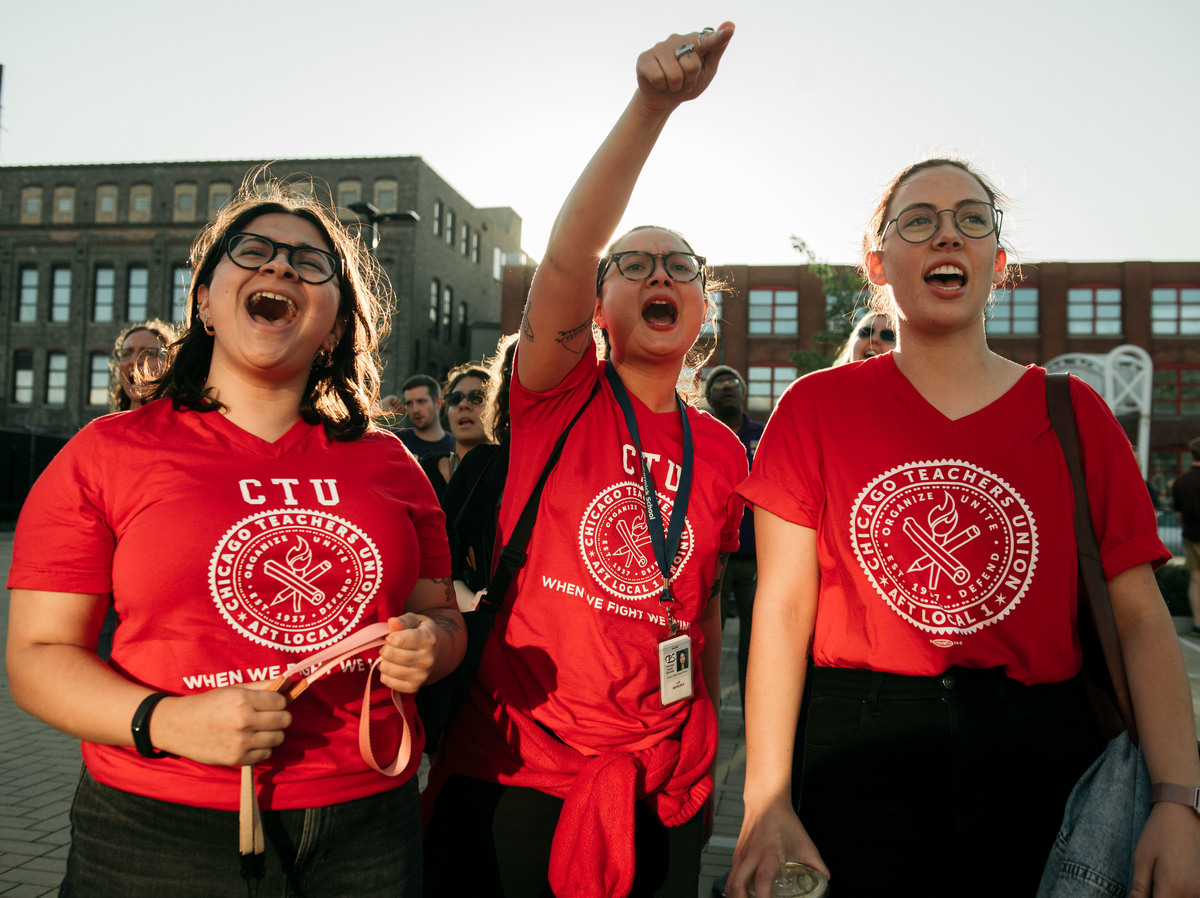 Chicago Teachers Union members cheer at a rally ahead of a potential strike.

The Chicago Teachers Union voted in overwhelming numbers to authorize a strike, union officials announced late Thursday. The union is planning to set a strike date next Wednesday. Teachers likely will walk out in mid-October if no deal is reached by then.

CTU leaders said 94% of members had voted in favor of a strike, surpassing the 75% threshold required by law. Some 90% of the ballots had been counted Thursday night.

The union emphasized it will continue to bargain in hopes of reaching a deal. Members plan to be at the table all day Friday and have bargaining sessions planned for next week.

Sharkey has warned that if teachers strike, it could end up being a "massive labor movement" that could have ripple effects throughout the city. The CTU is timing the possible walkout with two other unions, one representing other school staff, such as security guards and custodians, and another representing Chicago Park District workers. Both of those unions already have voted to authorize a strike.

If all three unions strike at the same time, it would leave the city scrambling to offer parents places where their children can go while they are at work. In 2012 — the first strike in a quarter of a century — parks and schools were open and staff not represented by the CTU were available to watch children.

Chicago Mayor Lori Lightfoot and Chicago Public Schools CEO Janice Jackson insist there is no need for teachers to walk out, with Lightfoot saying this week, "We should get a deal done. We should negotiate night and day to get a deal done ... I'll clear my schedule, I will put as many people on the case as possible. There should not be a strike in the city."

After the vote, the two leaders issued a joint statement heralding their compensation offer and their commitment "to increasing critical support staff to record levels ... As the product of public school systems ourselves, we know firsthand how hard our teachers work, and we celebrate their engagement and tenacity during the bargaining process over these past months. We are committed to doing everything we can to finalize a deal that is sustainable for all Chicagoans and for our city's future, that respects our teachers, and continues our students' record-breaking success for years to come."

They describe their offer of a 16% raise over five years as generous and historic. They also point out that state law prohibits the union from striking over issues outside of compensation and the length of contract.

That is one reason the union has held off offering support for the compensation package. "We are not going to settle money until teachers going into schools have an entire package of things that satisfy us," Sharkey said. 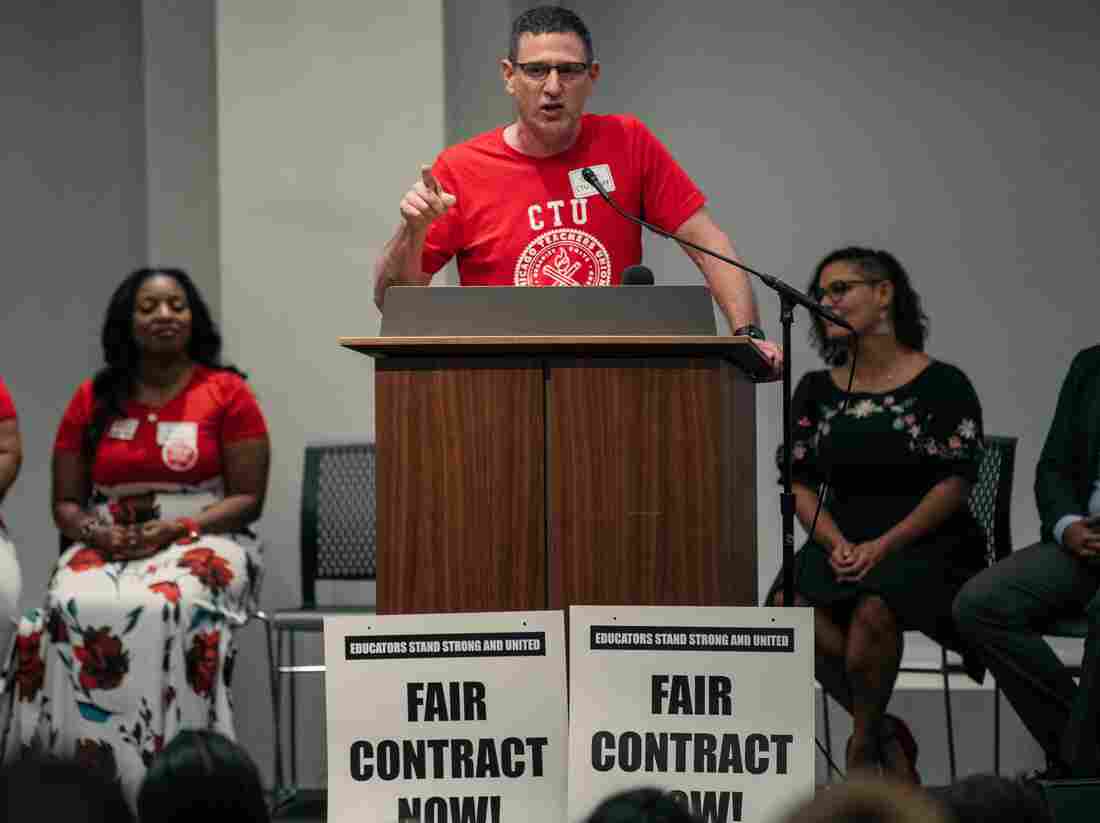 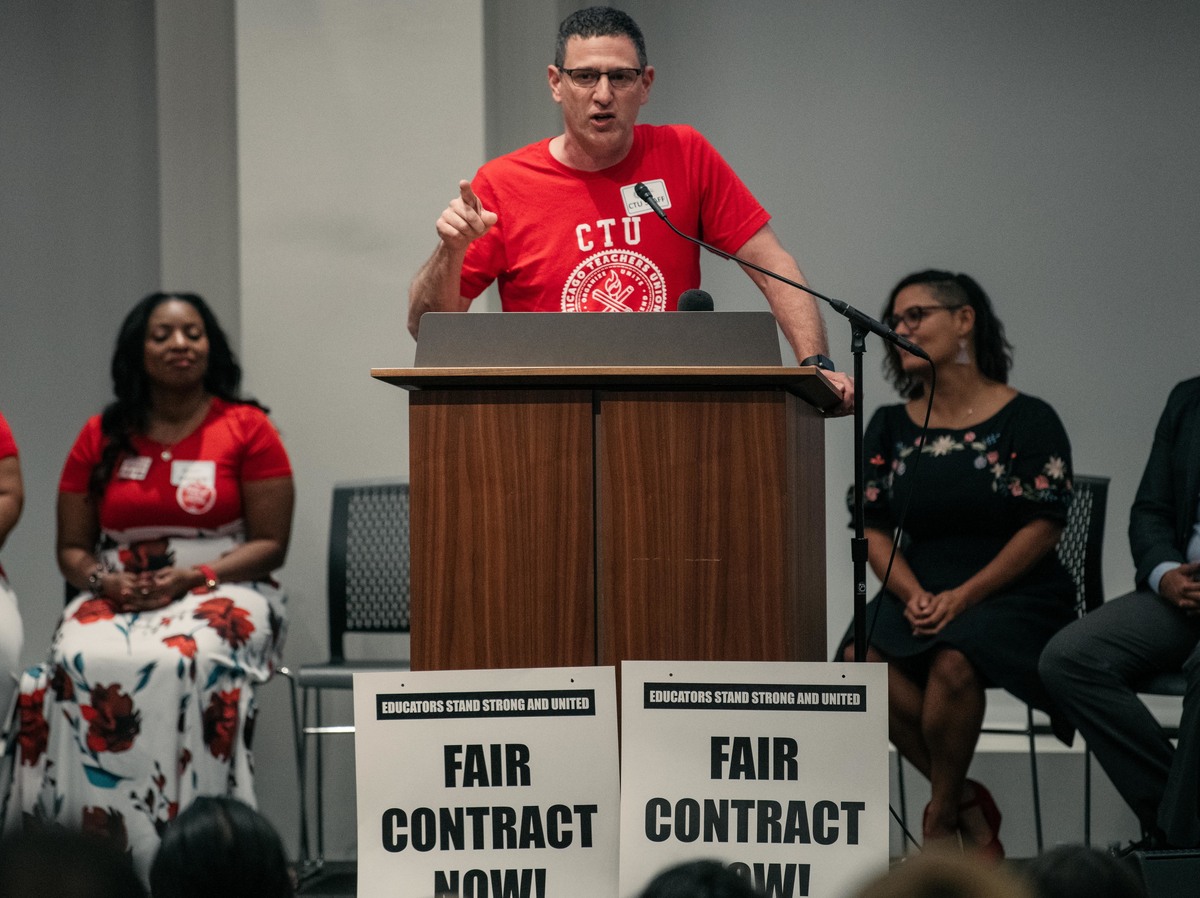 Recently Sharkey and other union leaders have emphasized that the compensation package will still leave office clerks and teacher aides — called PSRPs, who are CTU members — making such low wages that their children will qualify for free and reduced lunch. About 2,000 of CTU's 25,000 members are PSRPs.

Sharkey repeated Thursday night that the contract fight is about more than pay. Two of the big unresolved issues have to do with staffing and class size limits. The union had started out by insisting that the board of education agree to lower staff-to-student ratios for nurses, social workers and special education case managers. They also wanted a promise in the contract that more librarians would be hired.

This is the third time CTU has authorized a strike this decade. In 2016, 95.6% of the votes cast were in favor of strike authorization, though a deal was made before a walkout occurred. In 2012, the first Chicago teachers strike in a quarter of a century, nearly 90% of teachers voted to authorize a strike.