Accessibility links
Interview: Stephen Chbosky, Author Of 'Imaginary Friend' Stephen Chbosky — who wrote the YA classic The Perks of Being a Wallflower -- says his new book takes the familiar scares of childhood, like monsters in the closet, and twists them a little. 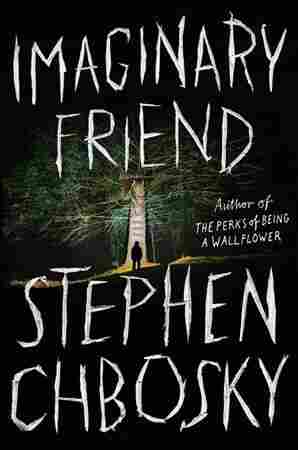 Christopher and his mother, Kate, are on the run from her abusive mate. They find shelter in Mill Grove, a small town in Pennsylvania, where Kate finds a job — and 7-year-old Christopher begins to hear voices from clouds that lure him into the woods, where he hears the voice of another little boy, crying.

Imaginary Friend is the title of the new novel — a horror story — by Stephen Chbosky, who 20 years ago wrote the bestselling coming-of-age novel, The Perks of Being a Wallflower. Chbosky says that he likes to write about kids like Perks's Charlie, "innocent kids being put into precarious situations. In Perks it's high school. And in this one ... it's clouds that may be staring back at him, and a woods that may or may not have an evil presence in them."

The original idea was, I just thought about when we were all little kids. We all have this experience really, on the ground — or roof if you're a city kid. You look up in the clouds and you see the shapes, you say "it looks like a dog, a hammer, a face, whatever." And my "what if" was, what if a little boy realized that, for the last two weeks, it was always the same face looking at him?

The Pangs And 'Perks' Of High School, Revisited

That's where it started. And then I thought of this moment outside of his school, where he's all alone and the last of the buses pull away, and he looks up — and what was a small face is now almost as big as the sky. And he says to the cloud, "Hello, can you hear me?" And there's a little thunderclap in the distance that could be a coincidence. So he says, "If you can hear me, blink your left eye." And the cloud slowly does, unblinks, and then it floats away. That's what I had. And it was it was fascinating to me. And I wanted to know where that cloud was going, and I wanted to know why it was going, and I wanted to know what was behind it. And a 10 year journey later I have all the answers.

Eddie, that they all call Special Ed ... he's loosely, loosely based on this boy that I knew as a little, little kid, named Eric Olson, who lived up the street. And Eric, I'll never forget, he drove his father's car, when he was I think three years old, across the street and into the neighbor's yard. And he always brought bacon on the bus. I remember that as well. And I was very fond of Eric. He moved away to Appleton, Wisconsin and I lost touch with him. But I always loved him, and always loved the idea of this kind of wild kid.

On how Christopher's experience in the woods changes him

He comes out, and there is a voice, a presence that he feels. And there's this one moment I'll never forget when, you know, he walks into the woods late at night, where there's this tree. And he sees this white plastic bag on the ground and he picks it up, and he starts talking to the white plastic bag. As if it's somebody real that is his imaginary friend. And that voice and the ability to feel it, and maybe the ability to read better, and to know numbers better and to understand maybe what people are feeling, little by little, bit by bit these powers come to him, and he doesn't know if it's real or if it's imaginary.

I have to say, when you throw yourself into a book — even more than a movie, quite frankly, because I've done both — it becomes very real to you, even the very notion of what is real and what is imaginary changes as you throw yourself into all these pages. You know, these characters on some days were as real to me as as anyone I was passing in the street.

On why we're afraid of monsters under the bed

I don't know. You know, one thing that was really enjoyable to me writing Imaginary Friend was taking all of those, shall we say, tropes of childhood, all these things that we're all familiar with. You're afraid of the closet, you're afraid of what's behind the bathroom door, what's underneath the bed. And really something as simple as Saturday morning cartoons and the idea of like, you know, we all had this experience of watching these cartoons, and what if suddenly he's watching this little TV show that I made up called Bad Cat, and ... he's seen the episode a million times, and Bad Cat stops and suddenly looks at the screen, says "Oh hi, Christopher! Are you enjoying the show? Wow!" And as Christopher says, "How do you know my name?" "Oh you're my number one fan, of course I know your name, buddy!" And I love taking all those things, those universal experiences that we've all had, and turning them just slightly, to make us look at the world in a slightly different way.

On whether he hears voices when he writes

I love taking all those ... universal experiences that we've all had, and turning them just slightly, to make us look at the world in a slightly different way.

Oh of course, yeah. Hundred percent. You know, sometimes too much. I remember writing The Perks of Being a Wallflower and I had to stop after about halfway through the book, because I would walk around and I would talk like Charlie. I couldn't do it anymore. So you have to take a break. And so in this case, even though I wrote this book Imaginary Friend over the course of 10 years, I had to take a big break ... whether it was to make the Perks of Being a Wallflower movie, or write the Beauty and the Beast screenplay or to direct Wonder. All these things I stopped, partly because I had other professional opportunities — but partly because it got to be a little too close to home.

Dana Cronin and Cindy Johnston edited this story for radio, and Petra Mayer adapted it for the Web.