Accessibility links
Review: 'The Incompletes,' By Sergio Chejfec There's not much plot in Argentinean author Sergio Chejfec's novel — and what happens might be imaginary. But if you accept the story's dream logic, it will leave you both dazed and pleased. 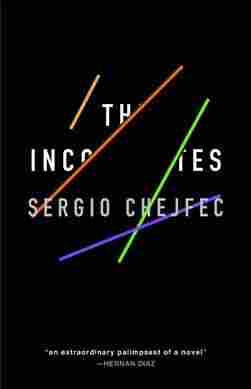 There are some books that are easy to describe in a sentence. "Teenagers battle each other to the death in an arena" is a nifty way to encapsulate The Hunger Games. Then there are the books that resist summaries.

There are also two kinds of readers: plotters and scene viewers. The plotters are those who demand action. Watch the hero leap into battle! Cringe as the villain betrays the princess! Scene viewers are like visitors walking through a hushed museum, pausing to rub their chin and nod as they look at a painting, taking it all in. The strokes of the brush, the palette used in the composition.

So I'm here to tell you that the reason why it's hard to encapsulate The Incompletes by Sergio Chejfec, translated by Heather Cleary, is because it has no plot. It's all scene viewing.

Sometimes people think a lack of a meaty plot means nothing happens in a book, so I'll clarify that stuff happens in this book. But there's still not much of a plot. Instead, we get a web of ruminations on everything from the construction of a city to the writing of novels.

There are essentially only three characters, and two of them are the ones on stage, with the third acting as a narrator or containment device. Felix is an Argentinian in Moscow, writing letters to his friend back home (except that "letters" sometimes means postcards, and much of everything that happens in the book might merely be the imagination of the friend). Masha is the owner of the hotel where Felix stays. And that's kind of all there is to it. Except that it isn't.

In terms of performing any actions, neither of these characters do much. Felix contemplates the dingy hotel where he's lodging and sometimes he takes walks around the cold city, observing the world around him. Masha seems to have no existence but the managing of the hotel, though sporadically she amuses herself looking at a book stuffed with bills and fantasizing about what life would be like if it were a novel.

"I have sometimes wondered what led Felix to assume the existence of secrets that were worth uncovering, when in reality he would have had a hard time finding anything more predictable if he'd tried," says the narrator of The Incompletes, and that's exactly the feeling that suffuses this book. There are no great revelations, no convoluted plots afoot.

Hardly a line of dialogue is spoken. These characters barely every cross paths. And yet, even though we might say there is no plot, something obviously happens on the page. A sort of dream-like state is woven.

A few weeks ago I was on a panel discussing the Weird with a capital W, that sub-genre that is associated with horror fiction, with H.P. Lovecraft, Arthur Machen and other writers of that ilk. We were talking about whether certain Latin American fiction can be said to embody the Weird but without the horror element. We talked about Jorge Luis Borges and I ventured that "The Handsomest Drowned Man in the World," by Gabriel García Márquez is a story where, although nothing truly odd happens — it's simply a story of a corpse washed ashore — there is a sense of otherworldliness in the reactions of the townspeople who find the corpse.

Haven't you ever woken up and wondered why you just spend the night dreaming about buying 25 cans of soup at the supermarket? That is the kind of feeling you get with 'The Incompletes.'

I wouldn't say The Incompletes is Weird fiction, but I would say it shares that sense that what we are experiencing is akin to a dream. And aren't dreams sometimes illogical and silly? Haven't you ever woken up and wondered why you just spend the night dreaming about buying 25 cans of soup at the supermarket? That is the kind of feeling you get with The Incompletes, that this is not really Moscow, but a sort of soporific version of Moscow.

Just like you must accept dream logic when you're sleeping, you must accept The Incompletes for what it is, to allow the endless descriptions of rooms, city streets, broken televisions, the cold, peeling walls and dirty window panes, to take hold of you. In the end you'll stumble out of the book, a bit dazed, wondering what the hell you just read, but it's an enjoyable trek if you like beautiful sentences — and you're one of those scene viewers I mentioned.

Silvia Moreno-Garcia is an award-winning author and editor. Her most recent novel is Gods of Jade and Shadow. She tweets at @silviamg.