Accessibility links
'Encounter' Imagines A 1534 Meeting From An Indigenous Perspective "Growing up I would hear about our peoples being 'discovered' ... " says author Brittany Luby. "I would go home and my parents would tell me: That's not actually how things happened."

"You are not so different," squawked Seagull, who flew overhead. "You both cast long shadows."

Growing up in northwestern Ontario, author Brittany Luby would hear things in history class that didn't line up with what she learned at home. She descends from the Anishinabeg, and "growing up I would hear about our peoples being 'discovered' or our territories being 'discovered,' " she says. "It was really confusing when I would go home and my parents would tell me: That's not actually how things happened."

In her new book, Encounter, Luby imagines the meeting of two men — Fisher and Sailor — on one day in 1534. The story draws from notes made by French explorer Jacques Cartier who let his crew go to shore on his first expedition to what is now North America. From an indigenous perspective, Luby imagines one of those sailors meeting a Stadaconan fisherman whose family has been living on that land and fishing in those waters for generations.

"I wanted to tell a story that showed that the Stadaconans were already here, and that they had knowledge that was valued and valuable in this space ..." Luby says. "I really just wanted to showcase that indigenous presence and cultural vitality."

The book is illustrated by Michaela Goade, who is of Tlingit descent."The sad fact is that for indigenous communities, accurate and respectful portrayals are either non-existent or woefully underrepresented," she says.

Luby says that when she saw Goade's vibrant, watercolor illustrations for Encouter, it felt like "the stars had aligned."

"It was a vision of the universe that resonated with me. ..." Luby says. "It was really important to approach this story with a sort of gentleness."

Crab woke briefly to admire both swimmers. "What fine figures," Crab thought. "They each found a shell to suit them." Michaela Goade/Little, Brown Books for Young Readers hide caption

On wanting to tell a story about shared humanity

Luby: In 1534, Fisher and Sailor didn't know what we know today — they didn't know what was coming: That France would eventually use knowledge extracted from North America to colonize indigenous lands. ... I wanted to imagine what might have unfolded if two people had thought perhaps they were just spending this moment in time together. But the other thing that I really wanted to do was to highlight that Fisher and Sailor had a choice in how they interacted and we have a choice in how we choose to interact today. ...

I think we have a lot of work to do drawing attention to colonial violence that happened in North America. ... But I think we also need stories that remind us of our shared humanities. So people aren't just focused on trying to help or how to fix a problem — but instead, they're looking to their neighbor — just like Fisher and Sailor are looking at each other — and going: How can we get through this day together? 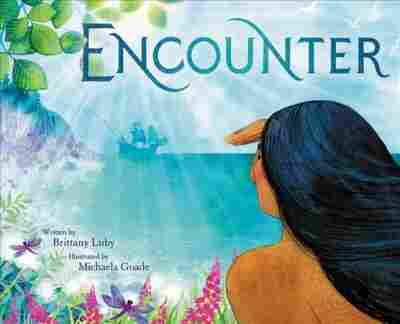 by Brittany Luby and Michaela Goade

On the dreamlike quality of the illustrations

Goade: I work primarily in watercolor, and so my style sort of lends itself more towards imaginative, more magical landscapes, and I'm really deeply inspired by the natural world. ... I spent a lot of time on building up the landscape. ... There's lots of sweeping cliffs and coastal vistas, beautiful ocean views, deep rich forests, lots of jewel tones on sunsets and sunrises. The book follows the day so the sun tracks left through right throughout the story.

Luby: One of the things that I really love about Michaela's illustrations is they have this dreamlike quality and they're very calming. The color palette is so invi ting, and so beautiful. ... For both Michaela and I — because we're not Stadaconan and we're not of Iroquoian descent — this really is an indigenous re-imagining of a story we've inherited through the Western education system. And I think that the colors invite us into this dreamworld, in this dreamscape.

On the way Goade strove for accuracy in her illustrations

Luby: Whenever there was a question she would take a moment of pause. We would break from the creative process to go back and do some research. So when Fisher needed a pocket, we were like: OK, did the Stadaconans have pockets? ... Michaela didn't make assumptions when she reached something that felt unfamiliar. We paused, and we reflected, and we moved forward in the best way we could. ...

"We do not sound the same," Fisher thought. But he waved cautiously at Sailor. Michaela Goade/Little, Brown Books for Young Readers hide caption

There is a part of the story where Fisher welcomes Sailor ... and he waves and one of the questions ... was, OK how would a Stadaconan wave in 1534? And we had no idea. ... So we decided to reframe the image in such a way that Fisher was shielding his eyes from the sunlight so that we weren't making assumptions or relaying information of what things should look like.

On creating a book that would invite critical thinking

Goade: The subject matter Brit chose to take on is rather complex for picture books ... [in] that it challenges readers to ask questions and to think critically about what we grew up hearing or learning. Negotiating this positive encounter — this day in the life that Fisher and Sailor share ... against the backdrop of a more historically complicated time. I think children are incredibly intelligent and often times smarter that we give them credit for. So I'm a huge advocate for books that can really foster that critical and creative thinking.