Accessibility links
Review: 'Wayward Son,' By Rainbow Rowell In her new book, Rowell returns to her Harry Potter-inspired heroes Simon and Baz — who've saved the world from evil and are at a loss as to what to do next. The answer? A road trip across America. 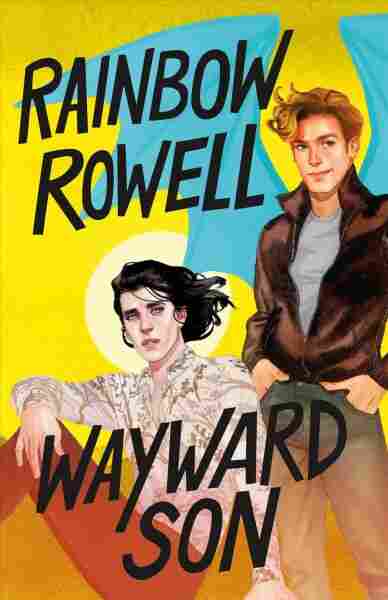 In Carry On, Rainbow Rowell offered us an alternate universe fanfic-inspired love letter to Harry Potter, wherein the chosen one, Simon Snow, falls in love with his nemesis Baz and comes face to face with the fact that being the chosen one is really not so great. In Wayward Son, Rowell picks up where she left off. What happens once the ultimate battle against evil is over, the world is saved, and the chosen one is left traumatized?

Simon Snow should be happy. He survived the final showdown with the Insidious Humdrum, he prevented the destruction of magic, and he managed to keep his best friends Penny and Agatha alive through it all. He even found unexpected romance with his vampire roommate, Baz.

But in order to save the day, Simon gave up his magic, lost his only parental figures, and opened up a bottomless well of emptiness inside himself. Now he's going through the motions, feeling unworthy of Penny and Baz and unable to match their enthusiasm about the future. Baz feels like he's losing Simon – and Simon feels like Baz would be better off without him.

But Penny has a plan. She's got three tickets to America, and proposes a cross-country road trip to save their friend Agatha, who's gotten herself into some kind of trouble while trying to break ties with her magical past. Maybe a change of scene and a new mission is just what they all need to put the trauma of saving the world behind them.

At first, it seems like America is just the infusion of fun and glamour they all needed. But very quickly, they realize that they actually know nothing about how magic works across the pond, and their ignorance could prove fatal. Even worse, it becomes clear that the danger Agatha needs saving from is no ordinary scrape, but a vampire conspiracy that may threaten the safety of their world. Maybe being a hero again is just the thing to put Simon Snow back on track ... if he lives through it this time.

Balancing Signal And Noise In 'Landline'

This book is for all the people who hit the epilogue at the end of Harry Potter and the Deathly Hallows and thought, oh please. As if these kids are going to just pick up, get over how traumatized they are, and live happily ever after married to their high school sweethearts. It's also for all the people who read Carry On and were swept away by Rowell's loveable characters and longed to know more about their fates – which is exactly what Wayward Son delivers. She knows we want to see Simon, Baz, and Penny brain and brawn their way through a new series of adventures while working out their tangled emotions, and all the rest is really icing on the cake.

This is a very enjoyable read, rendered even more fun than its predecessor by the fact that it isn't encumbered by its inspirational material. Rowell is free to do her own thing, giving us the post-high school road trip of our dreams but with magic and tumultuous romance.

My favorite aspect of Carry On was the magic system, where the phrases that magicians use to do magic are given their power by repeated usage. So nursery rhymes, clichés, songs — all the things we repeat again and again are the source of magic power. In Wayward Son, Rowell explores this further by having our heroes realize that the phrases which work back home may not hold power in a new place where language is used differently. She also examines the idea that geography matters. In England, there's magical power everywhere waiting to be tapped because the people are all crowded together in a small island nation. In the American West, where people are often spread out across great distances, a magician may reach for magic and find nothing but empty space. Magic is different in America.

'Wayward Son's American road trip narrative reflects America itself. It's flashy and fun and full of adventure, but underneath all of that lurk difficult questions about identity and colonialism.

Which brings me to an issue. A sprawling road trip book about the nature of magic in America runs inherently up against a dilemma: Is it responsible to create a vision of American magic that only represents its colonizers and immigrants? And if the answer is no, then is there a non-appropriative way to incorporate magic inspired by America's indigenous history and folkloric landscape? Native American traditions and beliefs are living culture and not a mythological grab bag for authors to plunder, and, probably wisely, Wayward Son sidesteps blunder by avoidance, which is certainly better than appropriation.

But this also points to a void at the center of the story. Given the contrast between British and American magic, it seems as though Wayward Son is saying something about the nature of colonial power in Britain versus in the U.S. In Britain, the magicians wield ultimate power to control and subjugate the magical creatures that live among them. In America, magicians are scattered, living in territories apart from magical creatures. They avoid each other, occasionally fighting when forced together. Is this a metaphor? If it is, I'm not entirely sure what it's trying to say, and if it isn't, then it seems like a missed opportunity to dig deeper.

Ultimately, Wayward Son's American road trip narrative reflects America itself. It's flashy and fun and full of adventure, but underneath all of that lurk difficult questions about identity and colonialism. As Simon, Penny, and Baz frolic through America's complexities unaware, so too can readers, but those seeking a complex journey may find themselves yearning for something more.