Accessibility links
Review: 'No Judgments,' By Meg Cabot The heroine of Cabot's new novel, inspired by a real story, tries not to judge the neglectful people who've abandoned their pets after a hurricane batters her Florida home town. Hint: It's difficult. 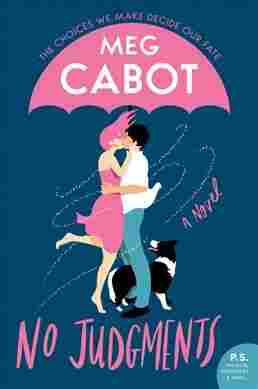 We're no strangers to hurricane season, the 24-hour coverage that tracks the storm systems, and the havoc that storms like the recent Hurricane Dorian can wreak.

Bestselling author Meg Cabot's new No Judgments tracks its own storm, and zooms in on a town prepared to fight it. Inspired by Cabot's own experiences during Hurricane Irma, the novel is half spirited roman à clef, half Hallmark-sweet romance; it drops readers right into the eye of a storm, in the form of a buoyant small town love story surrounded by a nuanced critique of both neglectful pet owners and media and government responses to hurricanes.

After weathering a personal storm — a sexually traumatic experience that people in her life dismiss, particularly her mother and ex-boyfriend — Sabrina "Bree" Beckham leaves behind her cushy New York City life to be a waitress on Little Bridge Island in the Florida Keys. And when she hears about a Category 5 hurricane barreling towards the island, she decides to stay put with many of her fellow neighbors, despite protests from her mother and the ex (maybe don't try this at home). With her adorable cat Gary, she holes up in her bosses' family mansion, which is supposed to withstand the strongest of winds.

The last thing she expects is to fall for their sexy nephew and bond over their mutual love for animals. Word on the street is that Drew Hartwell's a major player, and Bree wants to steer clear of men indefinitely; she's already been burned. But when she hears about all the pets abandoned during the storm, she works with her mom to send out a call to action, and teams up with Drew to break into houses and check on left-behind pets. (The story is inspired by a real woman who used Cabot's landline to execute an animal rescue mission during Irma).

As literal partners in crime, Bree and Drew become closer than ever — though it's hard not to make snap judgments about neglectful pet owners (and each other). Despite their best efforts, they do struggle to reserve judgment — sadly, it's a universal struggle. Bree and Drew butt heads from the first page, each driven by a litany of preconceived notions about the other. Fortunately for readers, they come to their senses quickly, their undeniable chemistry and love for animals cementing their bond in a matter of days.

The stakes in this novel, however, are larger than their relationship — as charming and passionate as that is. This story is also about helping Little Bridge recover, about Bree finding a way to get her life under control after a period of disorientation, and about the startling numbers of animals abandoned during hurricanes. In real life, it's easy to judge people for not evacuating, or abandoning pets if they do leave. Cabot's careful to remind us there are often extenuating circumstances in these situations — but she doesn't soften the blow of animal abandonment and neglect.

Hardships often bring out peoples' true colors — especially Bree's. Taking care of these struggling animals brings some balance back into her life and emboldens her to advocate for herself, just as she advocates for them. In many ways, the hurricane is a metaphor; anger and heartache from her past spiral up into a cathartic vortex that purges the toxicity in her life and allows her to accept new love and a new direction.

And again, expanding outward from the eye of Bree's personal storm, the way she and Drew step up for the town is admirable, but it points up the lack of national assistance the island receives. In fact, Cabot portrays a media that all but writes Little Bridge off as decimated. In highlighting the extensive coverage and the storm's messy aftermath, she critiques the dissemination of misinformation and the delayed aid that affects real places hit by disasters.

Even so, the people of Little Bridge don't let these issues get to them. Cabot captures the beauty of the community and its unity in the face of adversity. Despite the wreckage they have to wade through, the camaraderie Bree builds with the Hartwells cements a sturdy foundation for Little Bridge, sturdier than any physical infrastructure.

A thought-provoking contemplation on actions and choice, No Judgments creates a safe space amidst the storm for its characters and revitalizes readers' hopes for humanity.