Accessibility links
Sikh Deputy Sandeep Dhaliwal Fatally Shot In Houston-Area Traffic Stop Sandeep Dhaliwal emerged as a symbol of religious diversity in law enforcement as the first Sikh to become a sheriff's deputy in Harris County. "He was a unifying symbol," a city official said. 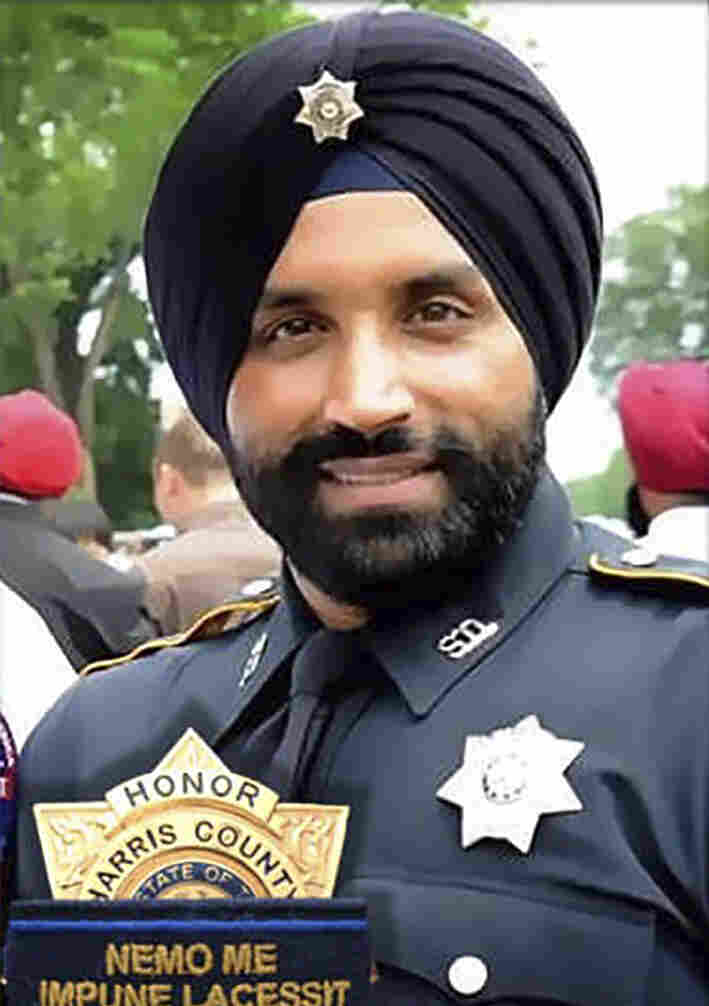 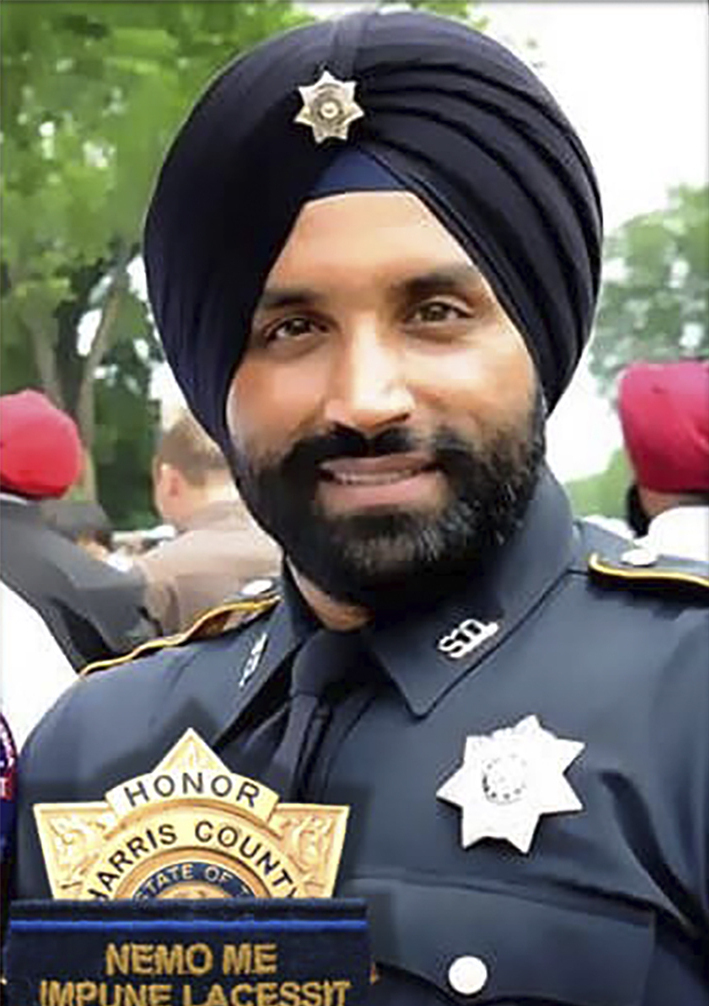 Harris County Sheriff's Deputy Sandeep Dhaliwal was shot and killed after making a traffic stop on Friday near Houston. The suspected gunman was charged with capital murder in the slaying.

A sheriff's deputy was shot and killed Friday afternoon in the Houston suburbs during a routine traffic stop. Sandeep Dhaliwal was the first observant Sikh to become a sheriff's deputy in Harris County, where Houston is located.

He was a "hero" and a "trailblazer," Harris County Sheriff Ed Gonzalez told reporters on Friday. "He wore the turban. He represented his community with integrity, respect and pride," Gonzalez said. "And again, he was respected by all."

Dhaliwal was 42, a married father of three and a 10-year veteran of the Harris County Sheriff's Office. He made national headlines in early 2015 when the sheriff's office changed its policy to allow Dhaliwal to grow out his facial hair and wear a traditional Sikh turban while on patrol.

The traffic stop, which took place at 12:23 p.m. local time, appeared to be a tame and conversational interaction, Lee said, until the deputy started to return to his vehicle. The suspect then reopened the driver's side door and bolted toward Dhaliwal from behind, gun in hand, and "shot him and struck him in the back of the head," Lee said.

Dhaliwal was then taken to the hospital, where he died of his injuries a few hours later.

Robert Solis, 47, has been charged with the capital murder of Dhaliwal, the sheriff's office announced Friday. Solis had an active parole violation warrant for when he was charged with aggravated assault with a deadly weapon in January 2017.

A resident who witnessed the traffic stop called 911 after she heard two shots and saw the suspect flee in a getaway car, according to Lee.

Solis was arrested within hours, after dash-cam footage allowed authorities to identify and locate the suspect at a business close to where the shooting occurred. Lee said another suspect who's believed to have been sitting in the passenger seat of the stopped vehicle has also been taken into custody. In the business' parking lot, authorities also confiscated the weapon they suspect the gunman used to fatally shoot Dhaliwal.

Alan Bernstein, the Houston mayor's spokesman, told NPR that Dhaliwal said his appearance didn't cause problems while on patrol.

"He was a unifying symbol," said Bernstein, who worked as a spokesman for the sheriff's office during the time in 2015 when the office first allowed Dhaliwal to wear a turban on patrol. "He had used his appearance as a conversation starter for educating people about what Sikhs are about, what their values are, including that of selfless service and the long history that Sikhs have for serving in the military and/or law enforcement."

As a sheriff in 2009, Commissioner Adrian Garcia recruited Dhaliwal. Garcia told reporters on Friday that Dhaliwal walked away from a lucrative trucking business to join the sheriff's office to help "build bridges between the Sikh community and the sheriff's office because of a 'mishap.' "

Although Garcia didn't expand on that incident, The Washington Post reported that Garcia had reached out to the Sikh community after a confrontation between the office's sheriff's deputies and a Sikh family in 2008. "The family called to complain of a burglary, but deputies who arrived were reportedly alarmed to find men in the home wearing beards and turbans and carrying small daggers. They called for extra officers and began interrogating the family," the Post reported.

"As a result of Sandeep stepping forward to become the first Sikh deputy, we have others," Garcia said.

Dhaliwal was admired for his generosity and commitment to public service. Gonzalez recalled the time his deputy traveled to Puerto Rico after a hurricane to bring aid to the family of a sheriff's office colleague. When Hurricane Harvey devastated Texas, Dhaliwal and Garcia worked with the humanitarian group United Sikhs to deliver truckloads of donated goods to first responders.

As words of grief, support and fond stories about Dhaliwal continued to pour in from his colleagues, friends and acquaintances on social media, members of Harris County law enforcement joined a community-led candlelit vigil to remember Dhaliwal.

This video captures the essence of who Deputy Dhaliwal was. He touched countless of lives along the way. A legacy that will never be forgotten. We will aspire to be as good as he was. #HouNews #lesm https://t.co/c3i2eBBLMv

The Sikh American Legal Defense and Education Fund, which has worked with the sheriff's office for cultural awareness trainings, mourned Dhaliwal's death.

"We are shocked and saddened to hear the news of the death of Deputy Dhaliwal," SALDEF tweeted. "He was a pioneer for the Sikh community and will always be remembered. Our condolences and prayers go to his family and friends."

A funeral ceremony planned for Dhaliwal on Wednesday, in Cypress, Texas, will be open to the public.