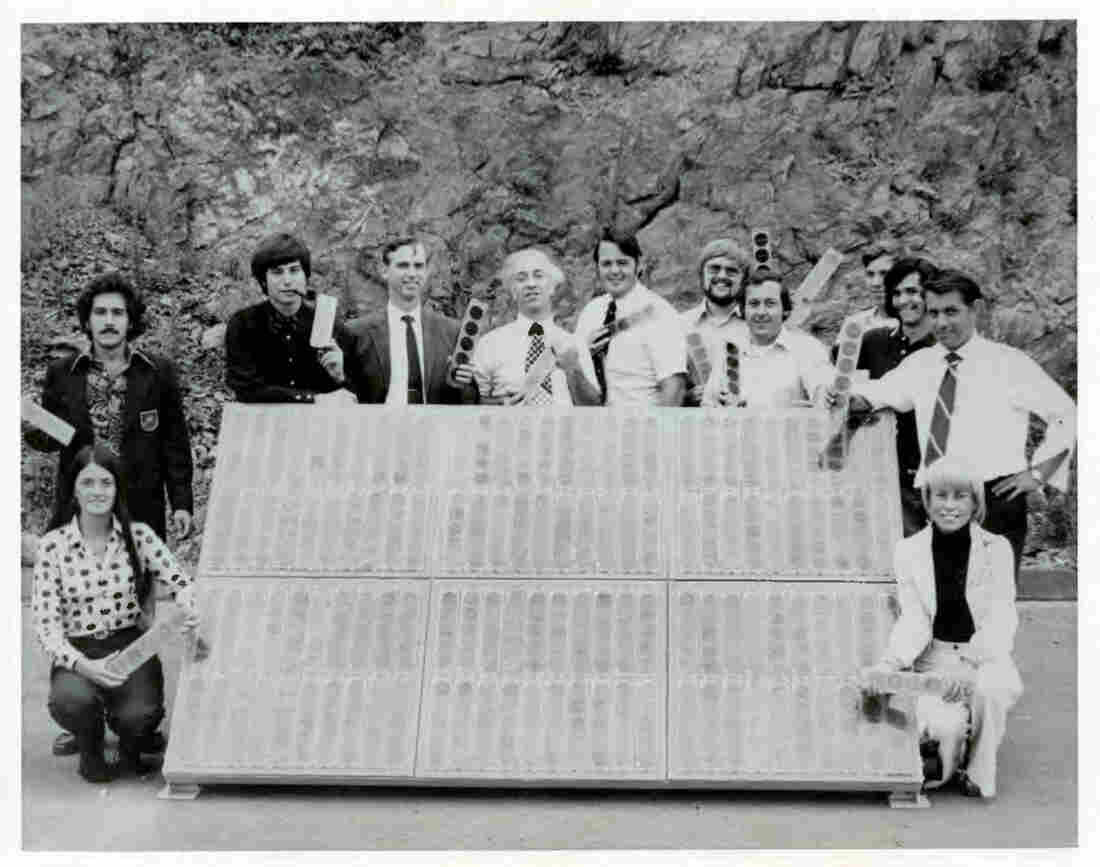 Elliot Berman (center, in patterned tie) and his team at Solar Power Corp. pose outside their office and manufacturing facility in Braintree, Mass., in 1973. John Perlin, author of Let It Shine: The 6,000-Year Story of Solar Energy, credits Berman, Solar Power Corp. and Exxon with "planting the flag of photovoltaics throughout the world." Robert Willis/Solar Power Corp. via John Perlin hide caption

Renewable energy has gotten so cheap that even oil giant Exxon Mobil, which reported $20.8 billion in earnings in 2018, is getting in on the savings.

Over the next couple of years, Exxon Mobil will begin purchasing wind and solar power in West Texas, part of a 12-year agreement signed late last year with the Danish energy company Orsted. The plan is to use cheap, clean electricity to power Exxon Mobil's expanding operations in the Permian Basin, one of the world's most productive oil fields.

It's not the first time economic considerations have led the company to explore the possibilities of solar.

Half a century ago — before climate change was a topic of much discussion and before Exxon was accused of deceiving shareholders and the public by downplaying the risks of climate change, prompting investigations and lawsuits — the company then known as Jersey Standard funded groundbreaking research into solar photovoltaic technology, which converts sunlight into electricity.

Other oil companies would follow. While the amounts spent by these big firms were tiny compared with their vast resources, these early, critical investments in solar technology laid a foundation for what is now a growing, multibillion-dollar industry.

Exxon's interest in solar was piqued at a time when it was unclear whether there were fortunes still to be made from fossil fuels.

"The origin was actually a strategic one," says Adam Louis Shrier, 81, a chemical engineer who spent 25 years at Exxon working in various commercial, technical and corporate positions.

Soaring demand for oil through the 1960s drove concerns about the U.S. oil supply. Inside Exxon, there were discussions about whether the company was becoming overly dependent on the countries that had formed OPEC.

"What if these producers start jacking up the price and our market dries up?" Shrier, who began working at Exxon in 1963, remembers people asking. "What can we do if we can't be in the oil business at all?"

As early as the 1960s, Shrier says, Exxon executives said, "We've got to diversify."

Exxon began looking into side businesses such as office machinery and word processing. Shrier, who had been in the company's central engineering operation, was put in charge of nonconventional energy. 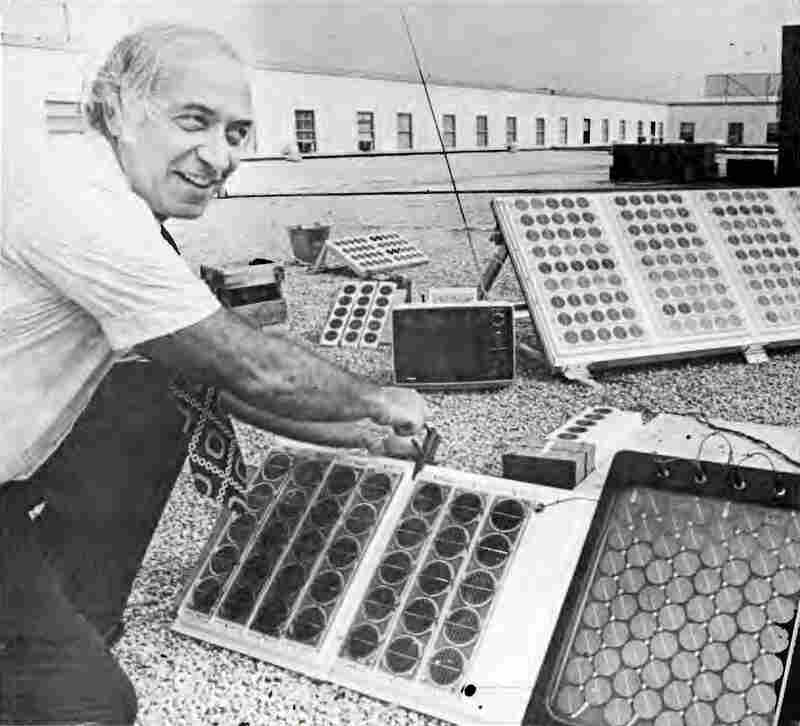 Part of Shrier's portfolio included overseeing a new research unit headed by a photochemist named Elliot Berman. In 1970, Berman had approached Exxon with an idea that other companies had passed on: figuring out how to build a solar panel that would be economic for use on Earth.

Solar cells had been used successfully in space since 1958, when a solar-powered transmitter was launched aboard the satellite Vanguard 1. Berman was among those who believed that solar photovoltaic technology had great potential on Earth, where millions of people lacked electricity.

"Here's the sun. Here are the people," says Berman, who is 89 now. "All you have to do is figure out a way to put the two things together."

The big challenge was cost. Manufacturing silicon — the material of choice for solar photovoltaics — was exorbitant. The solar cells being sent into space cost more than $100 per watt. For solar to be successful on Earth, Berman knew he had to bring the cost down to a fraction of that. He aimed for $10 per watt. (Today the cost is estimated to be less than 50 cents per watt.)

His small research team began searching for a material that would be significantly cheaper than silicon. At the same time, he needed to prove that solar could work commercially on Earth.

One particularly compelling idea emerged from a trip to one of Exxon's oil platforms in the Gulf of Mexico. The oil platforms were required to have navigation aids — foghorns and flashing lights, all powered by batteries.

The batteries didn't last long, and replacing them was a big expense for Exxon, not to mention an environmental hazard. The spent batteries were sometimes disposed of in the ocean, Berman says. Solar would be cheaper, he told the company. 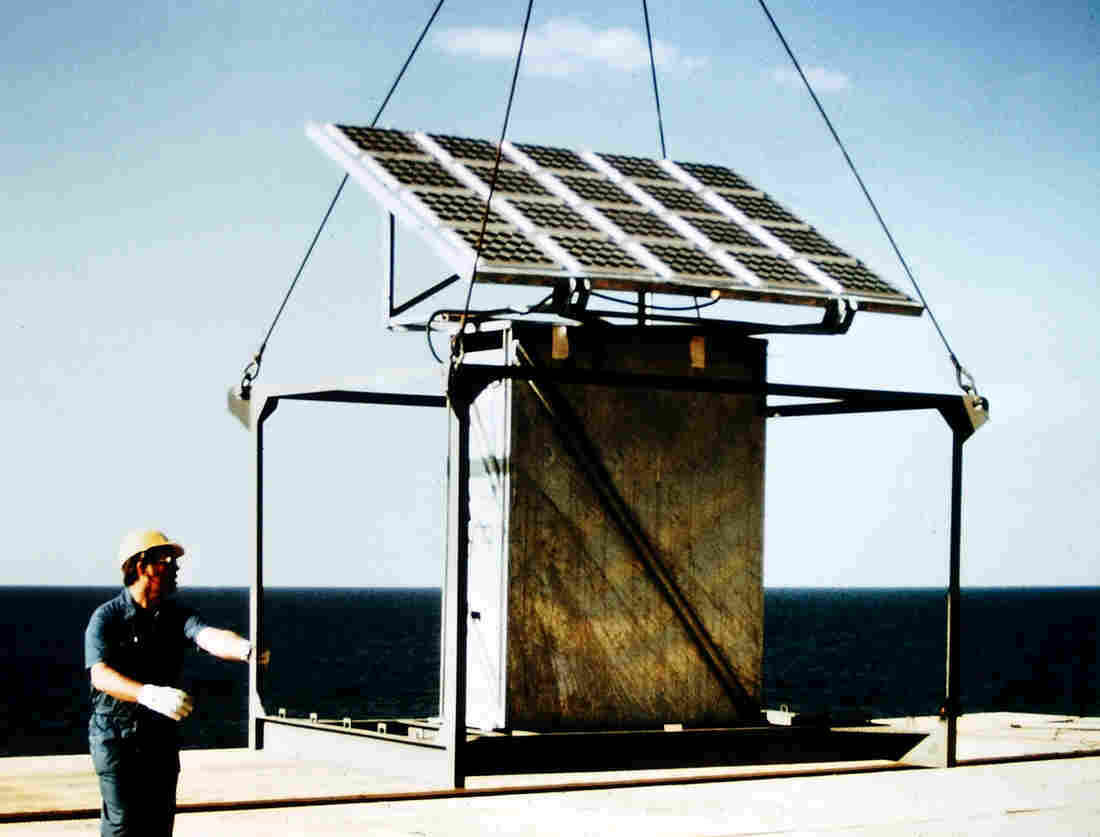 To speed development of a product that Exxon could market, Berman looked to buy ready-made silicon solar cells. He approached someone he knew at one of the space program's solar cell manufacturers, who readily agreed to Berman's desired price of $10 per watt.

But the seller couldn't deliver. What he had were space rejects, slightly imperfect solar cells that Berman believes would have been fine for terrestrial use — but there weren't enough of them.

After a fruitless search, Berman concluded that his team would have to make its own solar cells. A breakthrough in cost came when they figured out they could use silicon castoffs from the semiconductor industry. Imperfect silicon wafers may have been problematic for electronics but made little difference in the efficiency of solar cells, Berman discovered.

In 1973, the Exxon-funded Solar Power Corp. began manufacturing and shipping its first product: five silicon wafers on a circuit board encased in silicone rubber. These solar panels provided power in the U.S. and abroad — in places as far-flung as Australia and Mali — to oil platforms, mountaintop telecommunications stations, recreational boats and rural villages where solar energy was used to pump water. 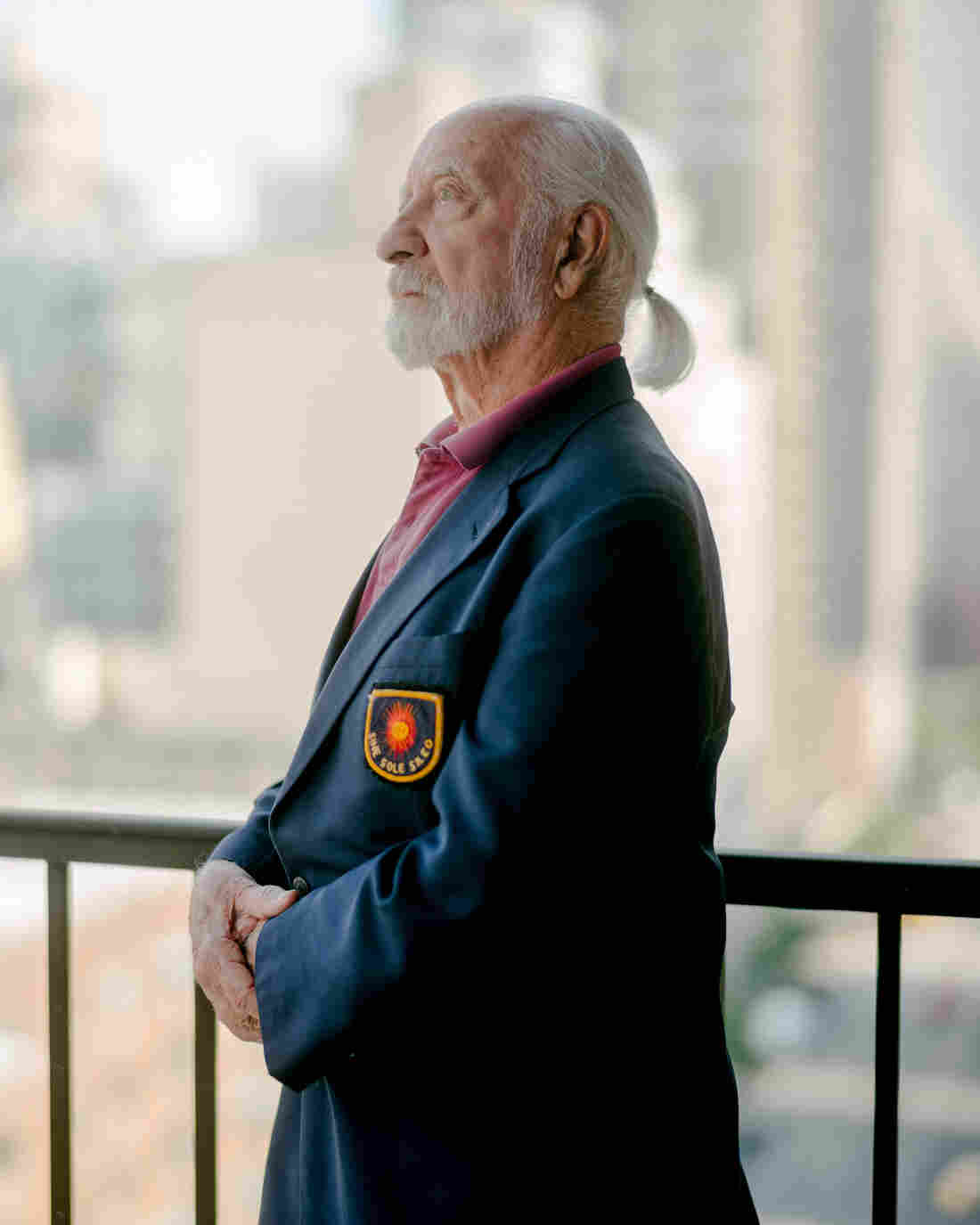 Elliot Berman, on the balcony of his New York City apartment, wears a boat jacket that he and his team donned for meetings with the boating industry about their solar panels. On the pocket is a drawing of a sundial and the Latin phrase Sine sole sileo — "Without sun, I'm silent." Elias Williams for NPR hide caption

"I think Elliot's most brilliant thing was to delineate all the markets that existed for solar at even the relatively high price that it was," says John Perlin, author of Let It Shine: The 6,000-Year Story of Solar Energy. "The real breakthrough of Elliot — with the help of Exxon — was planting the flag of photovoltaics throughout the world."

Meanwhile, back in the U.S., the energy crisis of the 1970s was unfolding. The 1973-1974 oil embargo sparked fuel shortages and long lines at gas stations.

In 1977, President Jimmy Carter warned the nation: "The oil and natural gas we rely on for 75% of our energy are simply running out."

What wasn't running out was sunlight. Using solar power to fulfill the world's energy needs seemed like an ever more promising option.

Exxon ran a print and television ad campaign with the slogan "Energy for a strong America," showcasing various ways the company was working to secure energy for the country — with solar featured alongside coal and nuclear power.

At the same time, Exxon had competition on the solar front. Looking to diversify its holdings in a time of uncertainty, Los Angeles-based oil company Atlantic Richfield acquired a solar company of its own, renaming it ARCO Solar. Berman would later join the company as chief scientist.

While Exxon had brought down the cost of solar cells and had opened up markets worldwide, ARCO Solar invested in making the technology better, boosting the efficiency of solar panels, honing manufacturing tools and techniques and creating a product that was more durable.

"That fundamental investment in materials, and understanding how these things behave" were crucial, says Terry Jester, an engineer who joined ARCO Solar as a college senior.

"Now people don't even talk about the reliability of solar panels," she says. "They're so reliable."

Despite the tangible gains, the oil industry's solar investments were "highly suspect in a lot of people's minds," says Chris Eberspacher, who was ARCO Solar's director of research and development in the 1980s. 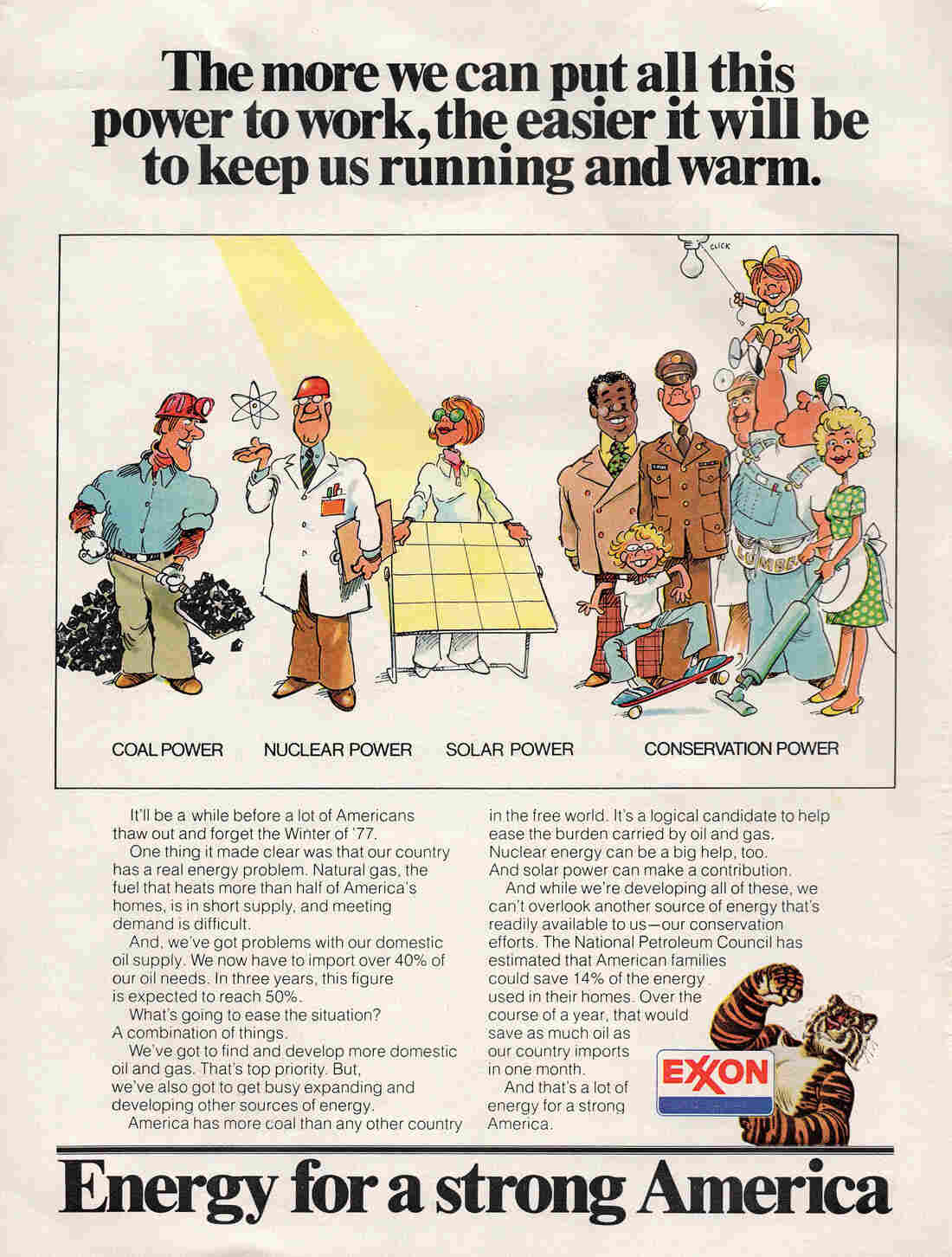 During the energy crisis of the 1970s, Exxon ran ads such as this one that showcased how the company was working to secure diverse sources of energy, including solar. Exxon hide caption

Numerous oil spills occurred in the Gulf of Mexico and off California's coast in the 1960s, '70s and '80s. "There was clear evidence of environmental spoliation, so I think oil companies were seen with great skepticism," he says.

Many presumed that oil companies were getting into solar so they could sabotage the industry from the inside. Eberspacher, who describes himself as a product of the 1970s environmental movement, saw something different.

"Our clear marching orders were to change the world," he says.

"He would say something to the effect of 'You may like the activity or you may not, but all the money we've spent on solar so far is roughly equivalent to one dry hole. And we don't intend to give up. We intend to drill this hole all the way to the bottom.' "

In the end, the oil companies did give up.

The energy crisis of the 1970s gave way to an oil surplus in the 1980s. New oil discoveries in countries outside OPEC allayed fears about the U.S. oil supply.

Oil no longer felt like a finite resource, prices plummeted and solar subsidies introduced by Carter were phased out under President Ronald Reagan.

Exxon closed down Solar Power Corp. around 1984, after Shrier wrote a report finding that it would be at least a decade before the solar business would be self-supporting. ARCO Solar powered through the 1980s, thanks in part to continued support from its chairman, but at the end of the decade, it was sold to the Germany company Siemens.

Out of those solar companies came a generation of innovators, many of whom continue to work in the industry today. Jester, now 61, is CEO of Mountain View, Calif.-based SolPad, which is launching a home solar and storage system in Puerto Rico this fall. Eberspacher, 63, is managing director of another Silicon Valley startup, Tandem PV, which is pairing new materials with silicon to make solar panels even more efficient.

"I'm no fan of oil companies, but I have to be fair when I think about who did what when," Eberspacher says of the oil industry's early involvement with solar. "Whether they did that for strictly economic reasons, whether they did that for some mix of economic and public relations reasons, it doesn't matter. They were there. They made a difference. And that difference enabled an industry which is now changing the world."

More recently, the growing urgency around climate change has spurred oil and gas companies to explore clean energy investments again, but spending on those projects remains low. CDP, a nonprofit that helps companies track their environmental impact, estimates that low-carbon projects account for just 1.3% of oil companies' spending. Exxon Mobil, which has invested in carbon-capture technology and biofuels, ranks near the bottom, lagging far behind its European counterparts.

Should their interest in renewables grow, the oil majors — with their enormous global footprint — would be well-positioned to jump in, Kretzchmar says, just as they were a half-century ago.

"The majors have been hothouses of innovation and talent for decades. They're capable of dealing with huge challenges — some of the most technologically challenging projects in the world," she says. "They have huge balance sheets, financial firepower that not many companies globally have."

For now, Exxon Mobil continues to concentrate that financial firepower on its core oil and gas operations. In March, the company projected that production in the Permian Basin will reach 1 million oil-equivalent barrels per day as early as 2024, an 80% increase over earlier forecasts, calling it "a significant acceleration of value."