Accessibility links
Antonio Banderas On 'Pain And Glory' And The Heart Attack That Changed His Life The Spanish actor says he had always been slow to cry, but things changed after a recent cardiac event. He channels his heightened emotions in a new film, another collaboration with Pedro Almodóvar. 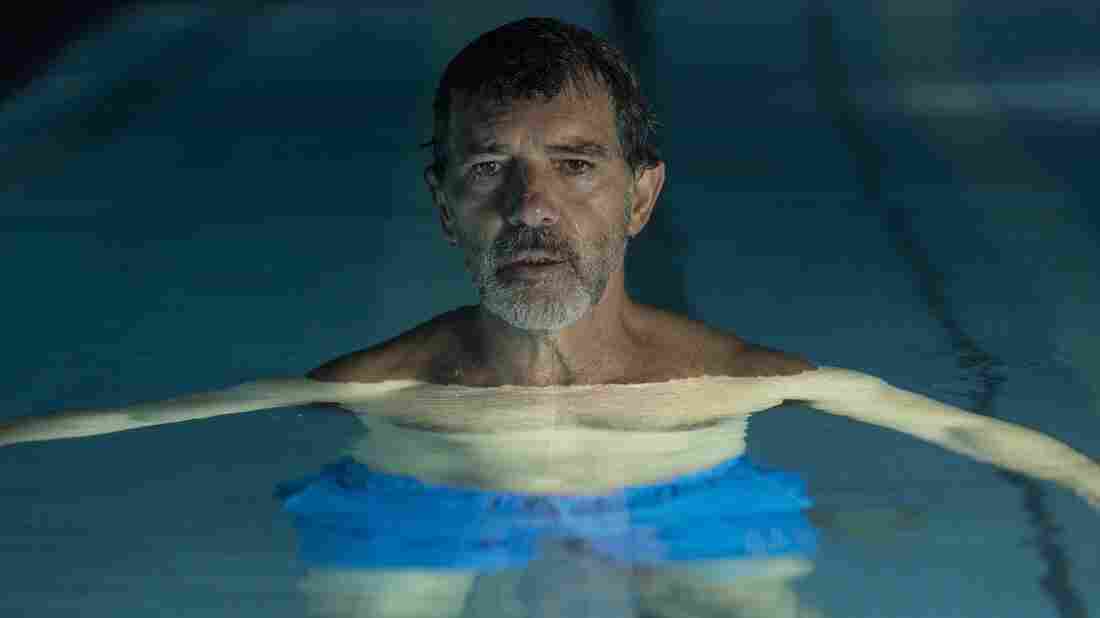 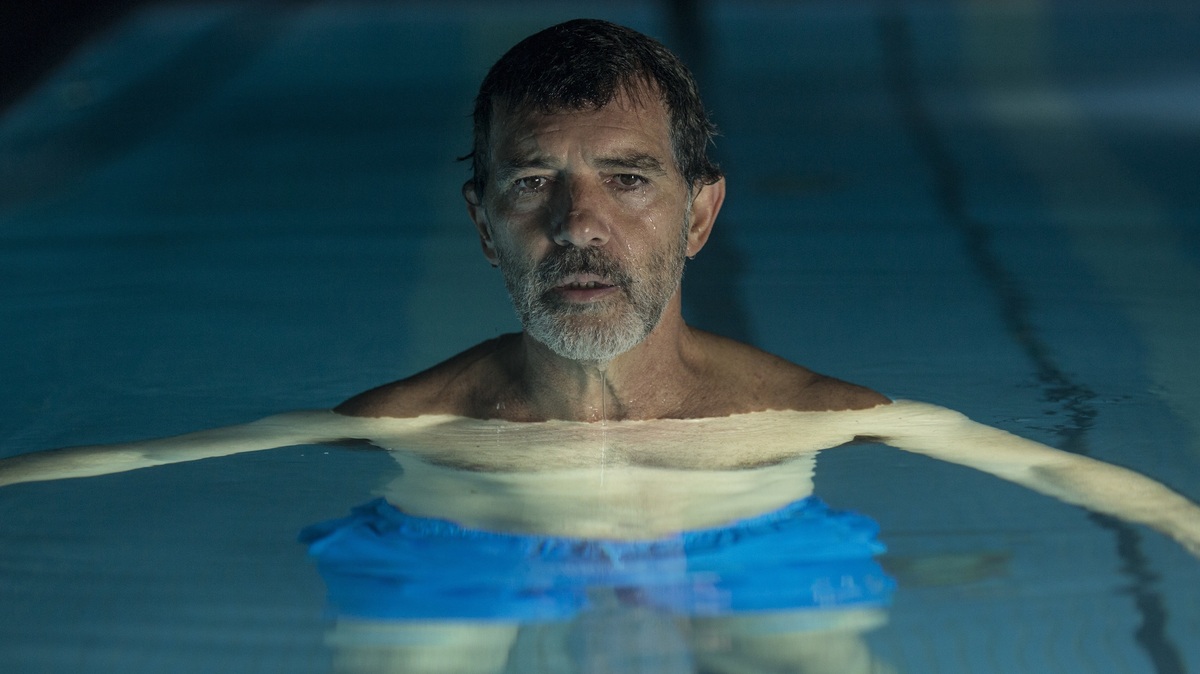 Antonio Banderas won the best actor award at the 2019 Cannes Film Festival for his performance in Pedro Almodóvar's new film, Pain and Glory.

A few years ago, when actor Antonio Banderas was in the hospital recovering from a heart attack, a nurse told him that the heart was a warehouse for feelings — and warned him that he'd likely feel sad in the weeks or months to come.

As it turns out, she was right: Banderas had always considered himself a "tough guy," slow to cry and not overly sensitive, but suddenly he found himself tearing up watching movies or listening to music.

"It just gave me a perspective of who I was, and it just made the important things [go to] the surface," Banderas says of his heart attack. "When I say this, people may just think that I'm crazy, but it's one of the best things that ever happened in my life."

Banderas' experience following the heart attack informs his performance in the new film, Pain and Glory, directed by Spanish filmmaker Pedro Almodóvar. In the film, he plays a screenwriter and director who lives to make movies but has stopped working because he's suffering with physical pain — and pain of the soul.

"By the time that I start working with Almodóvar in this movie, that was very close to this cardiac event that I had," Banderas says. "And Pedro said to me, 'You know, I don't know how to describe it, but since you had the heart attack, there is something different in you, and I don't want you to hide it. Because if you just show it, it's going to be very close to all of these pains that I describe in the movie.'"

On growing up in Spain, and his experience around the 1975 death of Spanish dictator Francisco Franco

When Franco died, I was 15 years old. I was a kid. And I was living in a Spain that, more than repressive, under my perception at the time as a child almost, is that we were in kind of an anesthesia. That was the feeling. Nothing happened. Everything was fine in a very kind of eerie way. ...

So when he died, I started growing into being a man almost in a parallel way that my country was going from a dictatorship to a democracy. And at the time you started discovering what the dictatorship was. Then you start seeing what freedom is all about, and then you start looking back and say, "Oh my God. How could I have lived there without knowing that these things exist?" So it was a time for the whole entire Spanish people to discover a new world, to adapt, to prove ourselves that we can be a democratic country.

There was a group of people — among them Pedro Almodóvar, and some musicians, and fashion designers, and photographers, and people in the world of art of all kinds — that decided to break with the past and create something new. So it was a time of a lot of color, a lot of hope and fun, and no restrictions in every possible way. And about breaking a lot of morality rules that were moralistic and very conservative in our country. It was really a beautiful time because we were conscious of that — it was not something that happened randomly. We were conscious that we were actually creating a path for the future, something that breaks with the past, and starts establishing another set of rules.

On how Almodóvar directs actors in emotional scenes

[Almodóvar] always said to me, "I don't want wet emotions. Actors, you guys love to cry because you think that it's a demonstration that you are real. ... I prefer actors who actually hold back the tears. Hold the emotions, you know, that they are more economic in the emotions." And that's been a constant with Almodóvar. Which is sometimes a contradiction because people think that Almodóvar is a little bit bigger-than-life with his expressions in narrative, and colors, and framing. But then he is very measured with the actors.

On how he got started acting in Hollywood, despite speaking very limited English at the time

It was kind of an accident in a way. We were nominated for an Academy Award at the time for best foreign film with Women on the Verge of a Nervous Breakdown. That's the first time I went to Los Angeles. We visited ICM, an agency for actors, just to visit; they invited us. And there was a person there that was literally taking coffees to the agent who was not even an agent. And he said to me, "Do you mind if I represent you here in America?" ... and this [is the] kind of thing that you say, "Yeah, sure whatever." ... So I went back to Spain after the ceremony and the whole thing. And this guy was actually very persever[ing], and at some point he said to me, "Listen. ... You should go to London to have an interview with Arne Glimcher, [a producer]." ... I say, "OK, so he speaks Spanish?" And he says, "No, he doesn't speak Spanish. He speaks English." ...

I ended up in London in a restaurant in front of this very elegant man. And I just kind of faked that I was shy and speak very little. And he just talked and talked, and I couldn't understand a word that he said. Really, I was just saying "yeah, yeah" and "of course, of course" — things like that. But I think it towards the end of the first dish, he realized that I couldn't speak a word of English because he started just laughing, and the whole situation became very funny.

But for whatever reason, very slowly he explained to me that I should go to New York and do a screen test, learning my lines phonetically. And I said to him, "Yeah, I can do that. I can learn that as I learn a song from The Beatles." So that's how I got into American movies.

On the process of learning English

It was very frustrating at the beginning, because you ... just learn the basic things so you can live, and [so] you can go to the market, you can do the things that are everyday things. But if you get in a dinner, for example, and people get into a very profound conversation, then, you're out. So for two, three, four years you feel like an idiot. You feel handicapped. You cannot actually totally show who you are or what you think, because the complexity of the ideas require better use of the language. And I didn't have it at the time.

Even now, I am shy. To tell you the truth, the most difficult for me is what I am doing right now, is just doing radio. Why? Because the only thing that I can use is my voice, and I cannot use my hands to explain myself. If I am in a print interview, the person [is] in front of me, I can explain physically what I am trying to say. Even if I am on television. But radio is very scary for me, still.

Lauren Krenzel and Mooj Zadie produced and edited the audio of this interview. Bridget Bentz and Seth Kelley adapted it for the Web.