Accessibility links
Majestic American Soprano Jessye Norman Dies At 74 The singer crafted a distinctive career that spanned decades and styles. Though a leading figure in her field, Norman's repertoire, fanbase and achievements stretched far beyond the opera house. 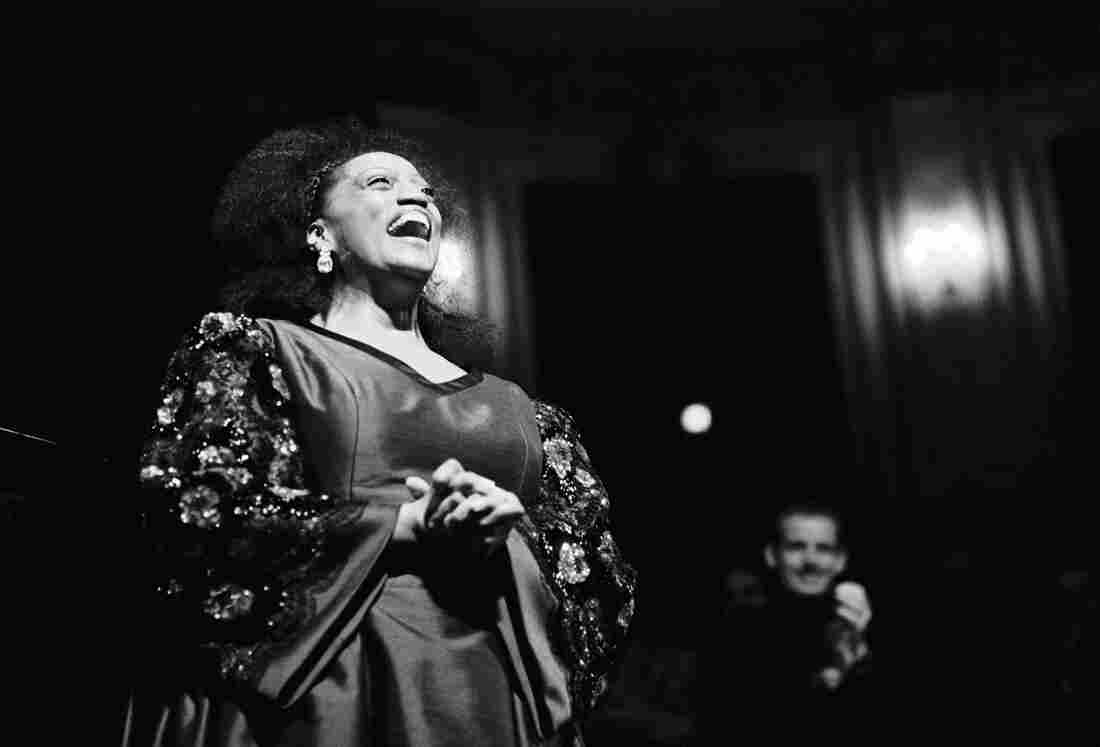 Jessye Norman performs in 1991 at the Concertgebouw in Amsterdam. Frans Schellekens/Redferns hide caption 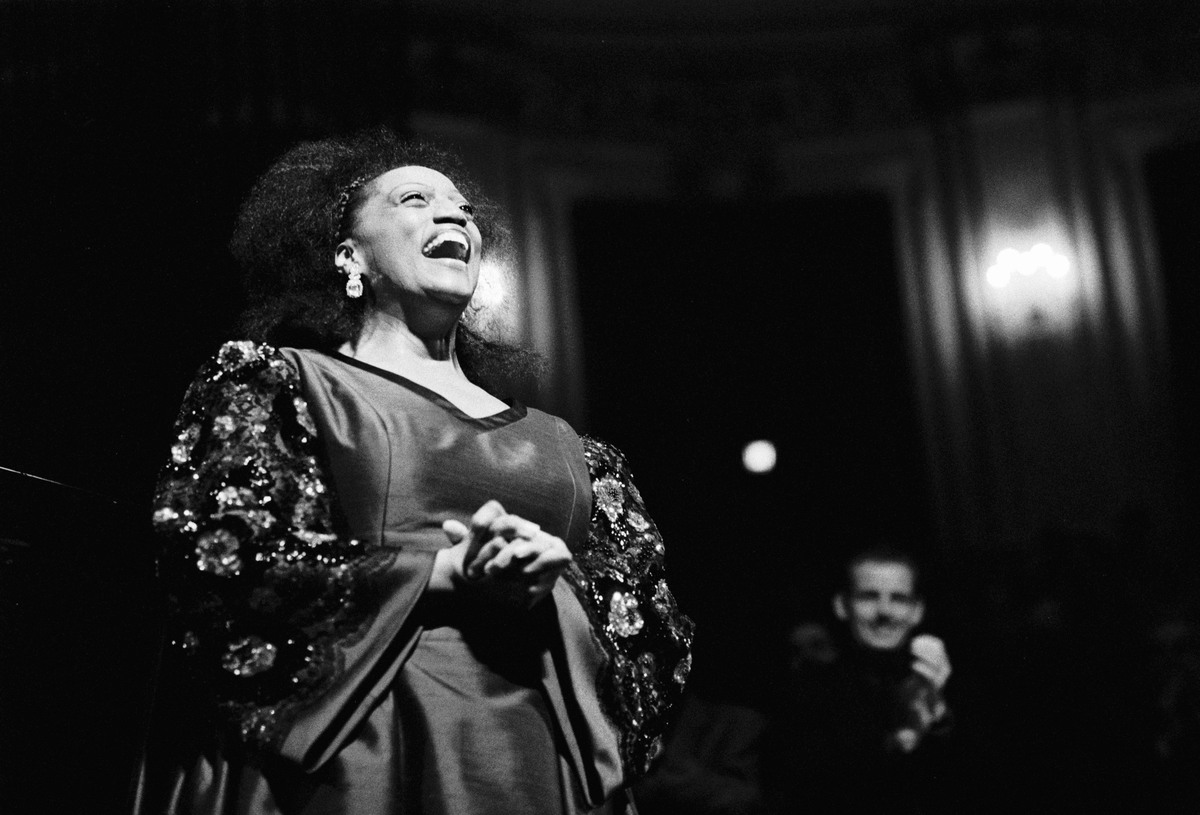 Jessye Norman performs in 1991 at the Concertgebouw in Amsterdam.

Opera fans are mourning one of the world's most revered voices.

Soprano Jessye Norman died Monday morning at Mount Sinai St. Luke's Hospital in New York. Her death was confirmed to NPR by a spokesperson for her family, Gwendolyn Quinn, as well as a representative from the Jessye Norman School of the Arts. The official cause of death was septic shock and multi-organ failure, secondary to complications of a spinal cord injury she had sustained in 2015. She was 74.

Praised for the beauty and opulence of her voice, Norman crafted a distinctive career that spanned decades and styles of music, becoming a leading figure both in the opera house and on the recital stage. When I spoke with her in 2014, she told me she couldn't recall a time when she didn't sing.

"My parents told me that I started singing at the same time as I started speaking," Norman said. The little girl from Augusta, Ga., with the big voice sang in church, school — and, she said, a few unusual venues.

"I'd sing for the opening of a supermarket, as I always say. There was even an opening of a car wash at some point. They weren't, sort of, very elegant settings all the time."

Inspired by the acclaimed contralto Marian Anderson, whose 78 records Norman listened to at a neighbor's home, she went on to develop her own singular sound that rang out in the world's top opera houses, finding legions of fans. Superstar soprano Renée Fleming counts herself among them.

"Honestly, I can't think of a single other soprano or mezzo-soprano with anything remotely approaching her sound," Fleming tells NPR. "It was almost like a wall of sound coming at us, but extremely beautiful and consistent."

Like many American opera singers of her generation, Norman began her career in Europe, specifically Berlin's Deutsche Oper, where she made her debut in 1969 singing Wagner. With a large, attractive voice, she was offered roles she knew she was too young to sing — so she decided to take a self-imposed hiatus.

"I needed to go away from the opera house to allow my voice to mature. I wanted to save myself. I wanted to do this for the long term. I knew that already at 24," she said. In her time off, she honed her skills as a recitalist. She sang German and French songs, and always included spirituals.

Norman, who was born Sept. 15, 1945, in Augusta, Ga., grew up in the Jim Crow South and knew racism. She helped integrate local stores, sitting at white-only lunch counters. "We ordered food, daring the staff not to serve us," she wrote in her 2014 memoir, Stand Up Straight and Sing! Eleven years earlier, she founded the Jessye Norman School for the Arts in her hometown, as she told NPR in 2006.

"It's important to give back," she said, "and I find it really disquieting and disarming for me to see how little we pay attention to arts education for our students these days."

By that point, Norman was already a commanding star, having made her belated Metropolitan Opera debut in New York in 1983. That same year, she released perhaps her most beloved recording — Richard Strauss' Four Last Songs.

"Absolutely beautiful," Renée Fleming says. "I also love her recording of Strauss' Ariadne auf Naxos. I used it, really, as a document that I could think about when I was learning that role."

Norman's repertoire was broad, from baroque music to modernists, pop songs and blues, to her beloved Duke Ellington.

"The scope of her career is unique," Fleming says. "She was performing at such a high level, but very often not singing mainstream repertoire — not the bread-and-butter Italian repertoire. Singing with her own template, as it were, and still being beloved and lauded everywhere she sang."

The singer's fans extended far beyond the opera world: Her passing drew tweets from celebrities like Wendell Pierce, Whoopi Goldberg and Al Roker, who called her "an American treasure." She is survived by her brother James Norman and sister Elaine Sturkey, who released a statement saying that in addition to her musical achievements, "We are equally proud of her humanitarian endeavors addressing matters such as hunger, homelessness, youth development, and arts and culture education."

Norman was awarded the National Medal of the Arts, a Kennedy Center Honor, five Grammys, honorary doctorates and France's Legion of Honor — and she was still singing in public last year. In the fall of 2018, she was honored as a "Library Lion" at the New York Public Library, where she sang a duet with Fleming.

"We brought her a microphone — she stayed in her seat, I was onstage," Fleming says. "We performed [Offenbach's] 'Barcarolle' together and there was not a dry eye in the room, including me. Just to hear that sound, it was still glorious. Just a magical moment I will cherish."

When we spoke in 2014, Norman said that as long as she could, she would continue doing what she loved.

Ted Robbins contributed to the digital version of this story. Daoud Tyler-Ameen adapted it for the Web.