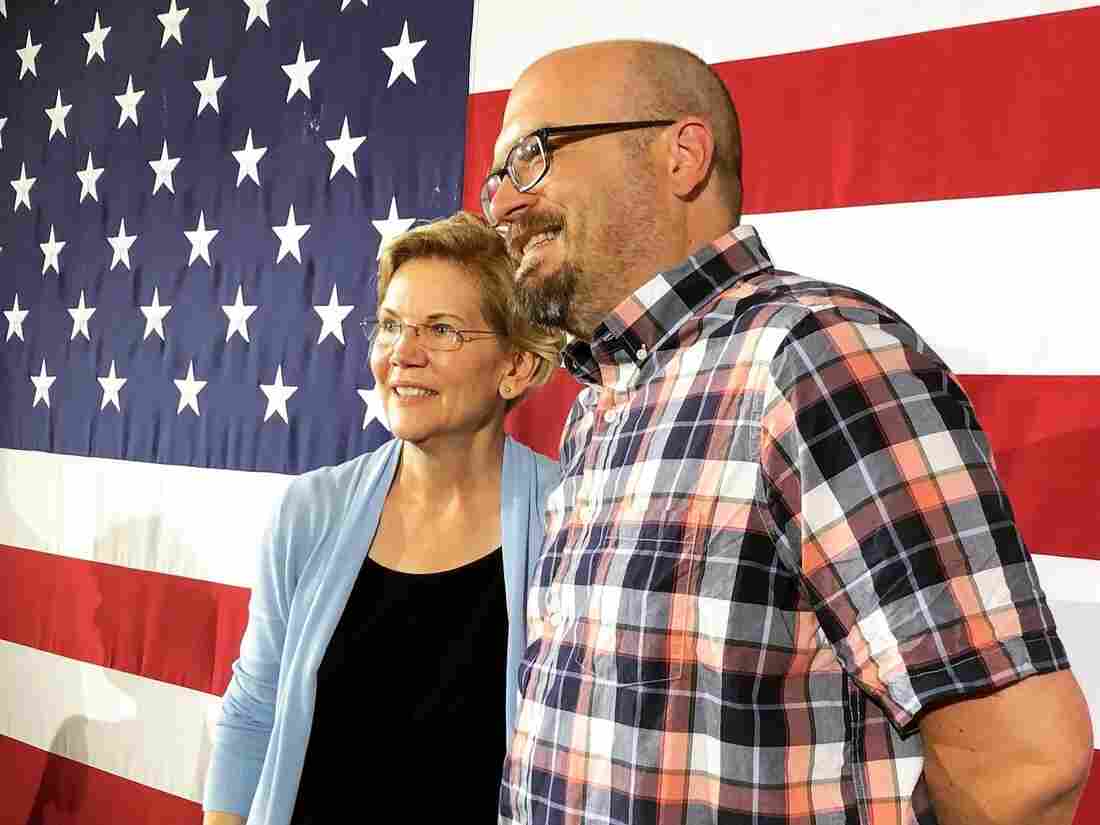 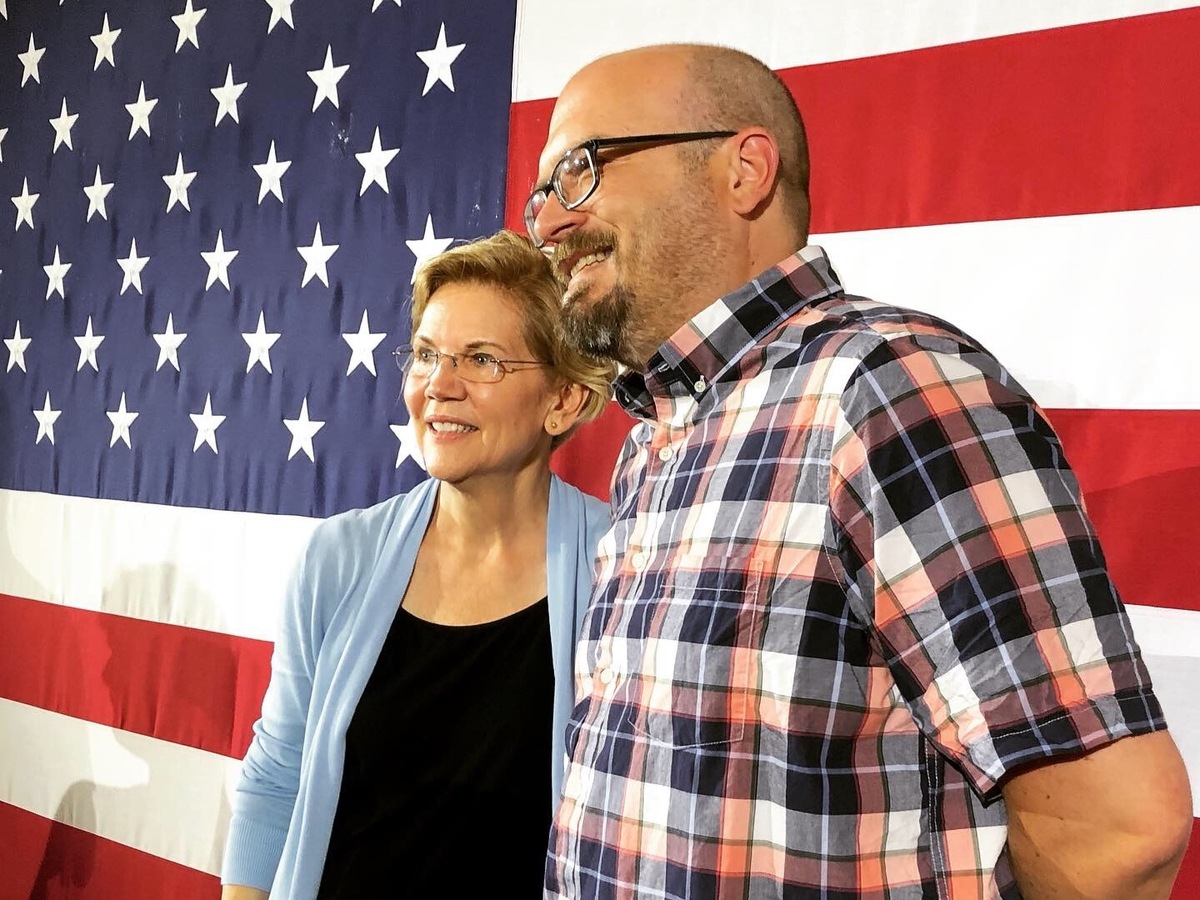 Jeromy Brown, 46, poses for a photo with Sen. Elizabeth Warren. Brown, like many progressive voters, thinks 2020 presidential candidates should "not equivocate" in calling Trump a white supremacist.

"If the shoe fits, then say it, and the shoe fits him," Brown said, while waiting in a photo line at an Elizabeth Warren rally in August. "Why should he be excused from that label?"

Brown, like many white liberal voters, appreciates that some Democratic presidential candidates have begun explicitly referring to Trump as a white supremacist. His top choice, Warren, told The NPR Politics Podcast in August that "when the white supremacists call Donald Trump one of their own, I tend to believe them."

But she's not alone in using such strong and direct language. Vermont Sen. Bernie Sanders has repeatedly referred to Trump as a "racist" on the campaign trail. And former Texas Rep. Beto O'Rourke insists that tackling white supremacy should be the No. 1 law enforcement priority in the country.

Undoubtedly, race and racism have become more salient political issues because of how the president talks about immigrants and minorities.

But the shift in how white liberals think about race actually predates both the president's victory and the response from 2020 Democratic candidates.

Beginning around 2012, polls show an increasing number of white liberals began adopting more progressive positions on a range of cultural issues. These days, white Democrats (and, in particular, white liberals) are more likely than in decades past to support more liberal immigration policies, embrace racial diversity and uphold affirmative action.

Researchers say this shift among white liberals indicates a seismic transformation in the last five to seven years and not just a blip on one or two survey questions.

In poll after poll, on a range of racial issues, both Goldberg and another researcher, Andrew Engelhardt at Brown University, have independently discovered repeated evidence of a more left-leaning white Democratic electorate.

These days, a large majority of white liberals — nearly 3 in 4 — say discrimination is the main reason black people can't get ahead.

For some context, in the early 2000s, white liberals were split on that question — about half said blacks who couldn't get ahead were mostly responsible for their own condition.

And, more white Democrats say the Confederate flag is a symbol of racism, rather than Southern pride. The reverse was true in 2000.

Some metrics even seem to be suggesting that white Democrats express more woke attitudes than their fellow brown and black Democrats.

Goldberg cited the 2018 American National Election Studies pilot survey, which found that 78% of white Democrats thought having more races/ethnicity in the country make it a "better" place to live. Fifty-seven percent of black Democrats, and 63% of Hispanic Democrats said the same.

About two years ago, Engelhardt said he also noticed another major shift.

"Starting about 2016 ... white liberals actually rate non-white groups more positively than they do whites," explained Engelhardt. "Usually, it's the opposite."

Most racial groups feel more warmly about their own race than they do about other races. That's true for every group, except white liberals, according to the American National Election Studies.

Engelhardt says these recent flips suggests there's something about being white in America that white liberals are trying to distance themselves from — something that could be accelerated by the rhetoric and tone of Trump and some of his supporters.

Democratic Candidates Call Trump A White Supremacist, A Label Some Say Is 'Too Simple'

When white liberals adopt some of these progressive positions, Goldberg said, they're "virtue signaling" — they want to prove that they're allies of minority groups and feel they need to do that more assertively and openly in the Trump era.

Although Trump did not create the current conditions, both Goldberg and Engelhardt agree the president has accelerated the change in white voter attitudes.

Brown, from the Warren rally, derided some of his fellow white people for being "white supremacists" who think they are the only people "with the real birthright claim on this land, even though that makes no sense whatsoever."

Engelhardt also suggests white guilt could be a motivating factor.

At an O'Rourke rally in Iowa a few weeks ago, 64-year-old Polly Antonelli teared up as the former congressman recounted a story from the El Paso, Texas, shooting. The suspected shooter in that incident had told police he was targeting Mexicans.

Antonelli said it's "highly appropriate" to refer to Trump as a white supremacist.

"He is the one dividing people, by saying the things that he says about Muslims, about Mexicans, about s******* countries," she said. "Calling him out on his crap might sound divisive, but it's a reaction to his divisiveness."

Antonelli admits that her own opinions on race have evolved as she learned more about different cultures.

"I realize how little I know and how I need to be more careful about what I say and how I pigeonhole people because of how they look," she said, indicating a sense of cultural awareness you hear more often voiced by white liberals in recent years.

The "moral buttons" are being pushed

One possible explanation for the dramatic shift in racial attitudes in the last decade is that white Democrats who disagreed with the party's embrace of diversity have just abandoned the party altogether. But even though the makeup of the parties has fluctuated, that's not the only explanation; Researchers point to a genuine shift among the white liberals who have remained in the party.

"Whites' identification as Democrats and Republicans is motivating them to hold different attitudes about people of color in the United States," said Engelhardt.

"[White liberals'] exposure to injustice inequality has been heightened because of the internet," said Goldberg. "The moral buttons of white liberals are being more frequently pressed."

Engelhardt agrees, and pointed to one specific incident as a potential catalyst — when a white police officer shot and killed Michael Brown, an unarmed black man, in Ferguson, Mo., in 2014.

"This kind of renewed attention to discrimination is new and novel for white liberals," he said, explaining why there has not been as large of a shift among people of color on these survey questions, in part because they didn't need social media videos to know what was already happening in their communities.