Accessibility links
How Magic Mushrooms Can Help Smokers Kick The Habit : Short Wave Magic mushrooms — they're not just for getting weird with your friends. Researchers are increasingly looking at psychedelics to treat conditions such as depression and addiction. 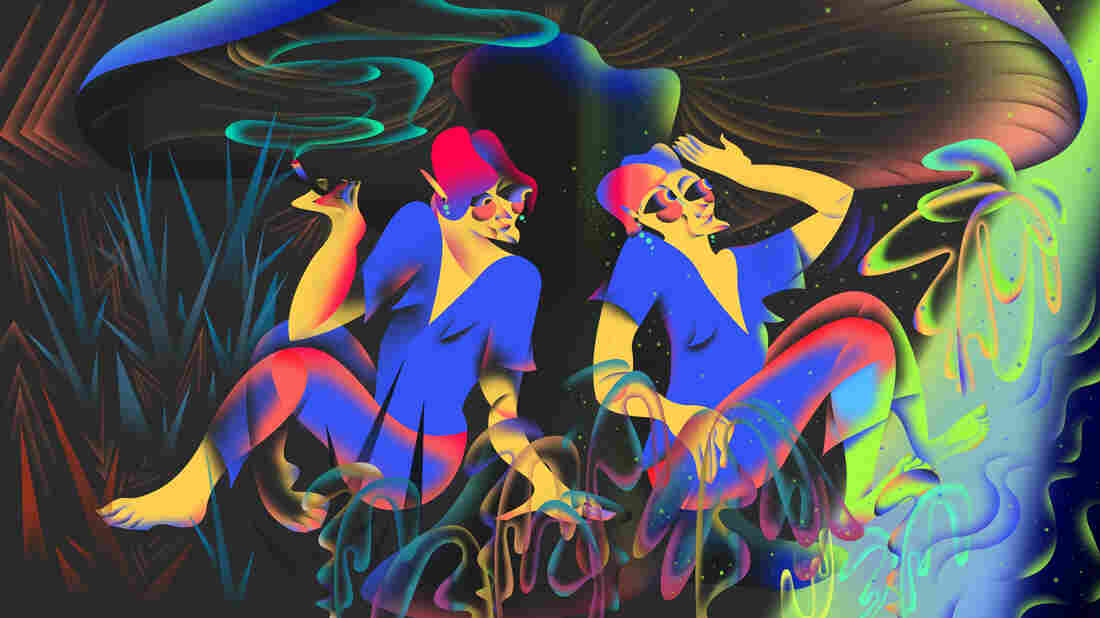 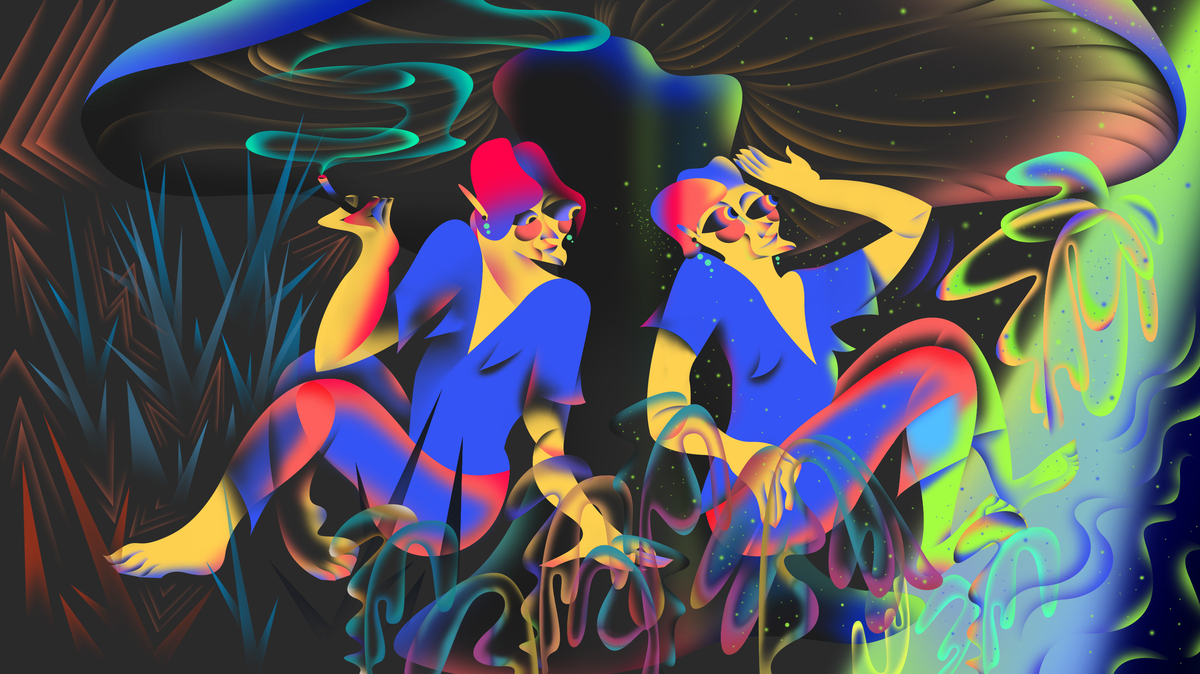 She didn't want to be a smoker. She'd tried to stop dozens of times over the decades. But she always came back.

Smoking was "one of my oldest, dearest friends," she said of her habit. "To not have that relationship was very, very scary."

Then she heard about a clinical trial to treat nicotine addiction with something a little unusual: magic mushrooms. Well, not actual magic mushrooms, but a little pill of a drug called psilocybin. It's the ingredient in mushrooms that gives people hallucinogenic visions.

"These brain changes lead to, oftentimes, a sense of unity," says Matthew Johnson, an experimental psychologist at Johns Hopkins University. It all may sound a little "woo-woo," he admits, but it seems to be working. Early results suggest that psilocybin, coupled with therapy, may be far more effective than other treatments for smoking, such as the nicotine patch.

Magic mushrooms have been used by indigenous communities for thousands of years, and research on psilocybin isn't all that new either. Work began in the 1950s and 1960s. But studies involving it and other psychedelics dropped off following the passage of the Controlled Substance Act in 1970, which outlawed hallucinogens and other drugs.

"The medical applications became, really, a casualty of a political war," Johnson says.

Chen-McLaughlin started smoking in 1971, around the same time that the first round of research was shutting down. By 2017, she was ready to quit once and for all. She decided to take part in the experimental therapy run by Johnson, which used psilocybin to treat smokers.

She didn't just show up and pop a pill. Instead, she spent weeks prepping with the researchers, undergoing tests and hours of talking with counselors about why she smoked.

Then it was game time.

Chen-McLaughlin showed up to the Johns Hopkins Bayview Medical Center Campus in Baltimore and was led to a "trip room," with a big, comfortable couch for the patient, soft lighting and some nature art on the walls — a bit like a fancy yoga studio.

Even though she'd never tripped before, "I wouldn't say I was, like, shaking in my boots nervous," she recalls. "I didn't feel like they would let anything happen to me." About 40 minutes later, things started getting weird. She experienced a sensation of floating. She closed her eyes.

"I saw monsters, I saw aliens," she recalls. "I had these big, gray, puffy clouds that kept sinking in from the ceiling, and I thought I was going to suffocate."

While she was tripping, she didn't talk very much to the clinicians. Instead, she just focused on letting go of two things that had long defined her: her job as a social worker, which she was set to retire from, and smoking.

Several hours later, "when I woke up, I was processed out. I was exhausted and I wasn't scared anymore," she recalls.

Johnson says an analogy is to imagine living in a city where you suddenly stop talking to your neighbors, and start talking to people way across town you don't normally talk to. "That can lead to novel ways of looking at oneself, thinking about the world in a different way, having insightful experiences," Johnson says.

David Nutt, a professor of neuropsychopharmacology at Imperial College London, says that in addition to making connections, psilocybin also seems to break negative linkages in the brain. His studies on treating depression with psilocybin show that the drug can disrupt negative feedback networks in the brain. "That network is nonfunctioning for many hours," he says. "By breaking down those networks, there's a chance they won't re-form."

It seemed to work for Chen-McLaughlin. Just hours after her psychedelic trip, she went out for dinner with her husband. When he lit up, she thought she'd try a puff. But she found that she couldn't.

"My hand would not let me touch that cigarette," she says. "To this day, if you paid me a million dollars to touch a cigarette with my hand, I cannot."

A year-and-a-half later, she remains smoke-free. "I think something in my brain got turned off," she says.

Johnson's small initial psilocybin study was extremely promising. So now he is doing a larger, more rigorous trial comparing the nicotine patch to psilocybin. Results are still coming in, but right now, half of the people who took psilocybin are smoke-free after a year. That's about twice as effective as the patch.

Nutt, who's now conducting his own follow-up trials on depression treatments, is impressed with Johnson's work. Nutt believes psilocybin potentially also could be used to treat other addictions, such as alcohol and opioids.

But there are some reasons to be cautious.

First, don't try this at home. The amount of psilocybin Johnson administers in his trials is considered a high dose, and it's paired with months of counseling. Nutt of Imperial College says that bad trips of the sort Chen-McLaughlin experienced can be common for those using the drug for treatment of diseases. Memories and experiences dredged up by the drug can be challenging and disturbing.

"You need therapists to help guide them and also prevent those memories from turning into traumatic memories," Nutt says.

Second, the treatment is really expensive and the whole process takes months.

Finally, not everybody should use psilocybin. People with predispositions for schizophrenia and other psychotic illnesses may be harmed by taking the drug.

Research on psilocybin is still in its early phases, but there appears to be growing interest from the medical community. And it isn't just researchers who are reconsidering psilocybin. This year, Oakland, Calif., and Denver decriminalized magic mushrooms. Similar efforts are underway in Oregon.

Matthew Johnson welcomes the resurgence in interest, and he says this is the time to give psychedelics another look.

"Depression and addiction are major causes of death in our society, and it's not getting better — it's getting worse," he says. "I think there's a broader societal recognition that we need to be creative and not dismiss things because of arbitrary associations."

This episode was produced by Rebecca Ramirez and edited by Viet Le.