Accessibility links
Deadline For Real ID Is One Year Away Starting Oct. 1, 2020, travelers will need a REAL ID-compliant driver's license or other accepted form of ID to pass through security. 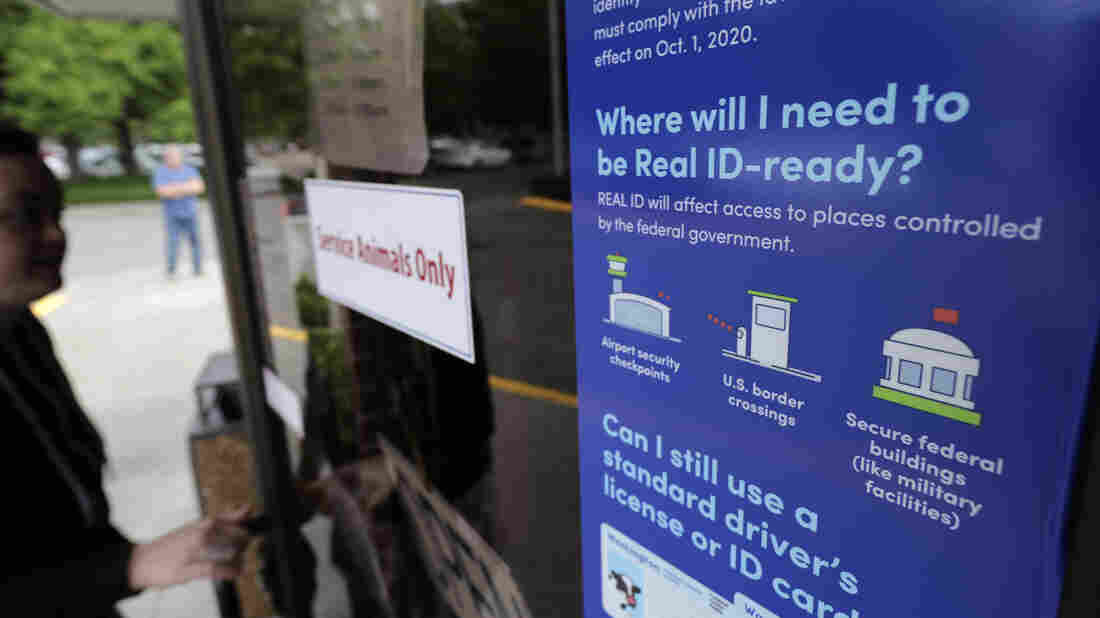 A person opens the door of a Department of Licensing office in Lacey, Wash. Starting Oct. 1, 2020, travelers will need a REAL ID-compliant driver's license or other accepted form of ID to pass through airport security. Ted S. Warren/AP hide caption 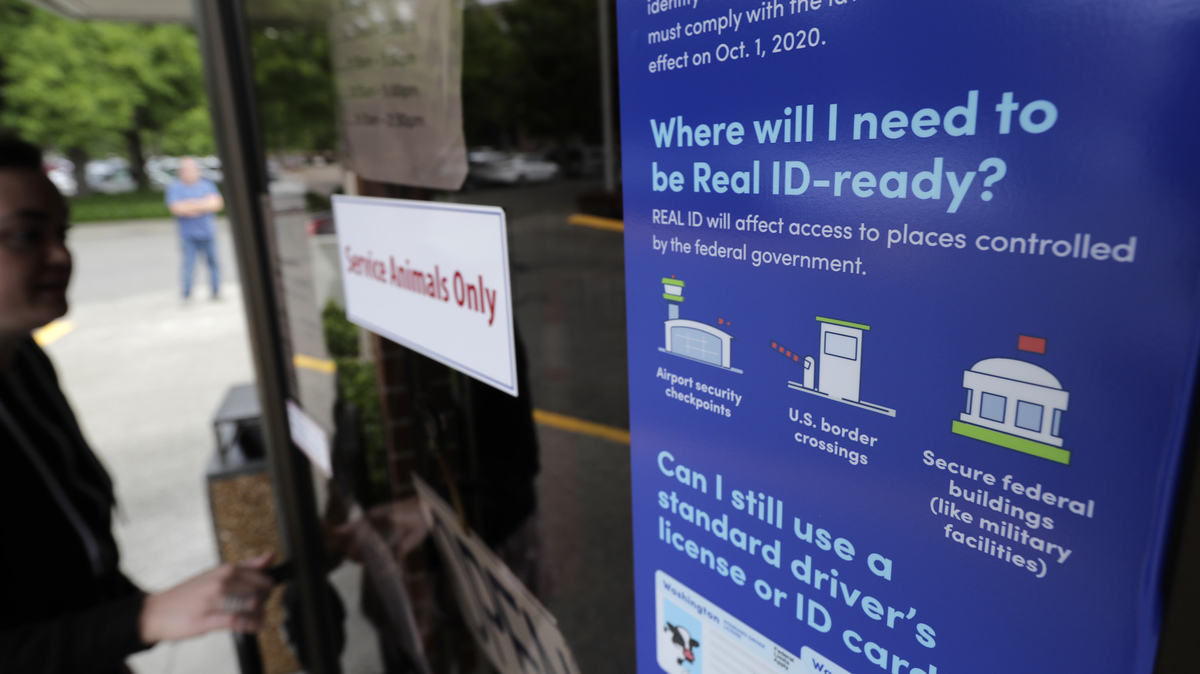 A person opens the door of a Department of Licensing office in Lacey, Wash. Starting Oct. 1, 2020, travelers will need a REAL ID-compliant driver's license or other accepted form of ID to pass through airport security.

Starting Oct. 1, 2020, when the REAL ID law takes effect, if you plan to fly anywhere in the United States, the driver's license you show to security is probably going to need to have a star at the top. Essentially an enhanced driver's license, it will be required at the airport gate, unless you have another accepted form of ID. And officials are worried that one year out, many people don't yet have one.

Congress passed the REAL ID Act in 2005 to address concerns of the 9/11 Commission, which found that it was too easy for people to obtain driver's licenses, posing a security risk. To get a REAL ID, you typically need to present a birth certificate or green card, a Social Security card and two documents that show your address.

A study done for the U.S. Travel Association shows that 3 out of 4 Americans do not have a REAL ID driver's license (usually indicated by a star at the top), or believe they don't. Erik Hansen, vice president for government relations at U.S. Travel, says that's going to be a problem for would-be airline passengers next year.

"Unfortunately it means they're gonna learn the hard way what the Department of Homeland Security has said," Hansen tells NPR. "If you don't have one of the compliant IDs, either a REAL ID or one of the alternatives, like a passport, you're actually gonna be turned away at the checkpoint and you're not going to be allowed to board your flight."

Hansen says an estimated 78,000 people could possibly be turned away on the first day of the new requirement, at an estimated cost to the economy of $40 million in lost travel-related spending.

A REAL ID-compliant license will also be needed to access most federal buildings and military bases.

As Hansen noted, there are alternative forms of ID that are acceptable, including passports and military IDs. But at a recent hearing, Sen. Roger Wicker, R-Miss., who chairs the Senate Commerce, Science and Transportation Committee, said that's not really going to help. "I think we need to heighten awareness about this," Wicker said. "Most people don't have a passport. And most people are not in the military or veterans, so it's going to be that driver's license nine times out of 10."

At that hearing, the acting deputy administrator of the Transportation Security Administration, Patricia Cogswell, said her agency is "doing everything it can to get the word out" about the upcoming deadline, but it's complicated. Some people have valid licenses that are not REAL ID compliant. And some states issue both compliant and noncompliant licenses. "So they may be renewing their license not fully understanding that they are getting a non-REAL ID-compliant license."

REAL ID has been fought by many states that objected to the new law, saying it's a form of national ID or too expensive to implement. And in the past, Congress has extended the deadline to give those states a chance to comply. Hansen, at U.S. Travel, is not expecting the TSA to move the deadline again. But, he says, there are things the government could do.

"I think realistically we just can't solve this by trying to send 182 million Americans to the DMV within the next year," he says. But Congress can take steps to modernize the REAL ID Act. For instance, Hansen says, allowing travelers who are enrolled in the TSA PreCheck program, which was implemented after the REAL ID Act became law, to go through the checkpoint regardless of whether they have the Real ID. Hansen says that would ensure "we're not just racing to catch up with the past."

The TSA has put up signs and is verbally warning travelers of the looming deadline. And the agency advises travelers who aren't sure if their license is compliant to check with their state driver's license agency.