Accessibility links
Opinion: Trump And Pompeo Enable Saudi Cover-Up Of Khashoggi Killing Saudi Arabia's campaign of denial would never have gotten off the ground had it not been for the Trump administration's support over the past year, say former State Department officials. 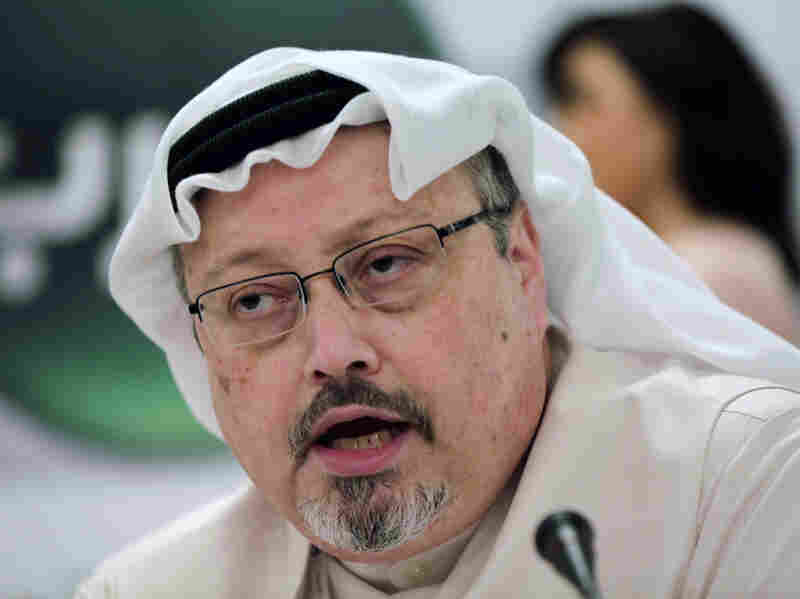 In the weeks following the death of Saudi journalist Jamal Khashoggi, President Trump spent more time praising Saudi Arabia as a very important ally than he did reacting to the killing. Hasan Jamali/AP hide caption 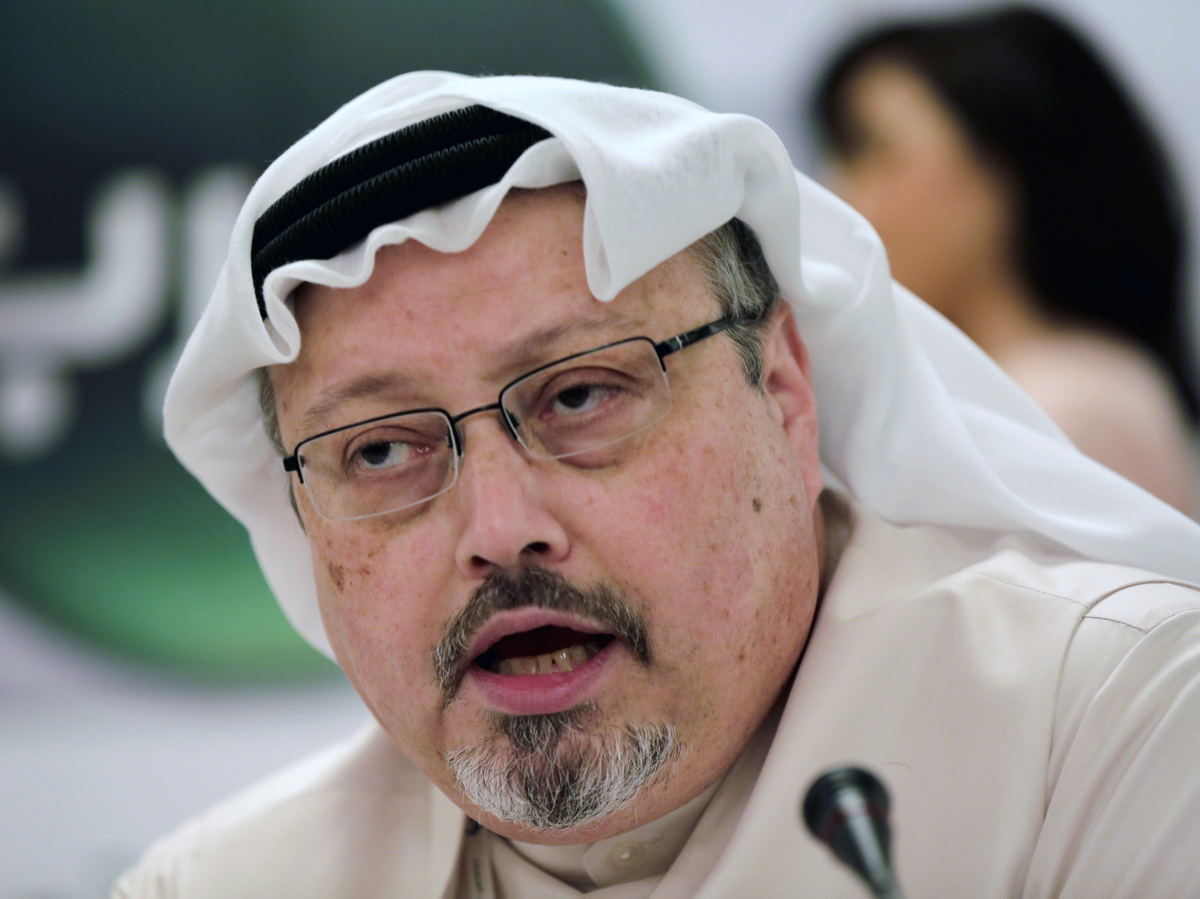 In the weeks following the death of Saudi journalist Jamal Khashoggi, President Trump spent more time praising Saudi Arabia as a very important ally than he did reacting to the killing.

Aaron David Miller (@aarondmiller2) is a senior fellow at the Carnegie Endowment for International Peace and a former State Department Middle East analyst, adviser and negotiator in Republican and Democratic administrations. He is the author most recently of the End of Greatness: Why America Can't Have (and Doesn't Want) Another Great President.

Richard Sokolsky, a nonresident senior fellow at the Carnegie Endowment for International Peace, worked in the State Department for six different administrations and was a member of the secretary of state's Office of Policy Planning from 2005 to 2015.

It has been a year since Saudi journalist and Washington Post columnist Jamal Khashoggi entered Saudi Arabia's Consulate in Istanbul where he was slain and dismembered. There is still no objective or comprehensive Saudi or American accounting of what occurred, let alone any real accountability.

The Saudi Crown Prince Mohammed bin Salman's admission in a recent CBS interview that he takes "full responsibility," while denying foreknowledge of the killing or that he ordered it, sweeps under the rug the lengths to which the Saudis have gone to obscure the truth about their involvement in the killing and cover-up.

The Saudi campaign of obfuscation, denial and cover-up would never have gotten off the ground had it not been for the Trump administration's support over the past year. The president and Secretary of State Mike Pompeo not only refused to distance themselves from the crown prince, known by his initials MBS, but also actively worked to relegitimize him. The Saudis killed Khashoggi but Trump acquiesced in the cover-up and worked hard to protect the U.S.-Saudi relationship and soften the crown prince's pariah status. In short, without Trump, the attempted makeover — such as it is — would not have been possible.

The Saudis killed Khashoggi but Trump acquiesced in the cover-up and worked hard to protect the U.S.-Saudi relationship and soften the crown prince's pariah status.

The administration's weak and feckless response to Khashoggi's killing was foreshadowed a year before it occurred. In May 2017, in an unusual break with precedent, Trump visited Saudi Arabia on his inaugural presidential trip; gave his son-in-law the authority to manage the MBS file, which he did with the utmost secrecy; and made it unmistakably clear that Saudi money, oil, arm purchases and support for the administration's anti-Iranian and pro-Israeli policies would elevate the U.S.-Saudi "special relationship" to a new level.

Predictably, therefore, the administration's reaction to Khashoggi's killing was shaped by a desire to manage the damage and preserve the relationship. In the weeks following Khashoggi's death, Trump spent more time praising Saudi Arabia as a very important ally, especially as a purchaser of U.S. weapons and goods, than he did reacting to the killing. Trump vowed to get to the bottom of the Khashoggi killing but focused more on defending the crown prince, saying this was another example of being "guilty before being proven innocent."

Those pledges to investigate and impose accountability would continue to remain hollow. Over the past year, Trump and Pompeo have neither criticized nor repudiated Saudi actions that have harmed American interests in the Middle East. Two months after Khashoggi's death, the administration, in what Pompeo described as an "initial step," imposed sanctions on 17 Saudi individuals implicated in the killing. But no others have been forthcoming, and the visa restrictions that were imposed are meaningless because none of the sanctioned Saudis would be foolish enough to seek entry into the United States.

What's more, the administration virtually ignored a congressional resolution imposing sanctions on the Saudis for human rights abuses and vetoed another bipartisan resolution that would have ended U.S. military assistance to Saudi Arabia's inhumane military campaign in Yemen.

The Saudis opened a trial in January of 11 men implicated in the killing, but the proceedings have been slow and secretive, leading the United Nations' top human rights expert to declare that "the trial underway in Saudi Arabia will not deliver credible accountability." Despite accusations that the crown prince's key adviser Saud al-Qahtani was involved in the killing, he's still advising MBS, has not stood trial and will likely escape punishment. A year later, there are still no reports of convictions or serious punishment.

The Trump administration has not only given the crown prince a pass on the Khashoggi killing, but it has also worked assiduously to remove his pariah status and rehabilitate his global image. Barely two months after the 2018 slaying, Trump was exchanging pleasantries with the crown prince at the Group of 20 summit in Buenos Aires and holding out prospects of spending more time with him. Then this past June, at the G-20 in Osaka, Japan, Trump sang his praises while dodging questions about the killing. "It's an honor to be with the crown prince of Saudi Arabia, a friend of mine, a man who has really done things in the last five years in terms of opening up Saudi Arabia," Trump said.

And you can bet that when Saudi Arabia hosts the G-20, scheduled to be held in its capital of Riyadh in November 2020, the Trump administration will be smiling as its rehab project takes another step in its desired direction.

What the U.S. should have done

Trump has failed to impose any serious costs or constraints on Saudi Arabia for the killing of a U.S. newspaper columnist who resided in Virginia or for the kingdom's aggressive policies, from Yemen to Qatar. In the wake of the Khashoggi killing, the administration should have made it unmistakably clear, both publicly and privately, that it expected a comprehensive and credible accounting and investigation. It should have suspended high-level contacts and arms sales with the kingdom for a period of time. And to make the point, the administration should have supported at least one congressional resolution taking the Saudis to task, in addition to triggering the Magnitsky Act, which would have required a U.S. investigation; a report to Congress; and sanctions if warranted.

Back to business as usual

The dark stain of the crown prince's apparent involvement in Khashoggi's death will not fade easily. But for Trump and Pompeo, it pales before the great expectations they still maintain for the kingdom to confront and contain their common enemy, Iran, as well as support the White House's plan for Middle East peace, defeat jihadists in the region and keep the oil spigot open.

Most of these goals are illusory. Saudi Arabia is a weak, fearful and unreliable ally. The kingdom has introduced significant social and cultural reforms but has imposed new levels of repression and authoritarianism. Its reckless policies toward Yemen and Qatar have expanded, not contracted, opportunities for Iran, while the Saudi military has demonstrated that, even after spending billions to buy America's most sophisticated weapons, it still can't defend itself without American help.

Meanwhile, recent attacks on critical Saudi oil facilities that the U.S. blames on Iran have helped rally more American and international support for the kingdom.

When it comes to the U.S.-Saudi relationship and the kingdom's callous reaction to Khashoggi's killing, the president and his secretary of state have been derelict in their duty: They have not only failed to advance American strategic interests but also undermined America's values in the process.