Accessibility links
Conan Says Podcast Title 'Conan O'Brien Needs A Friend' Is A Joke — Sort Of The late-night host says that hosting a podcast allows him to "mind meld" with guests in a way he can't on TV: "I can sit down and we can just go down a deep, deep, deep well, and it's fascinating." 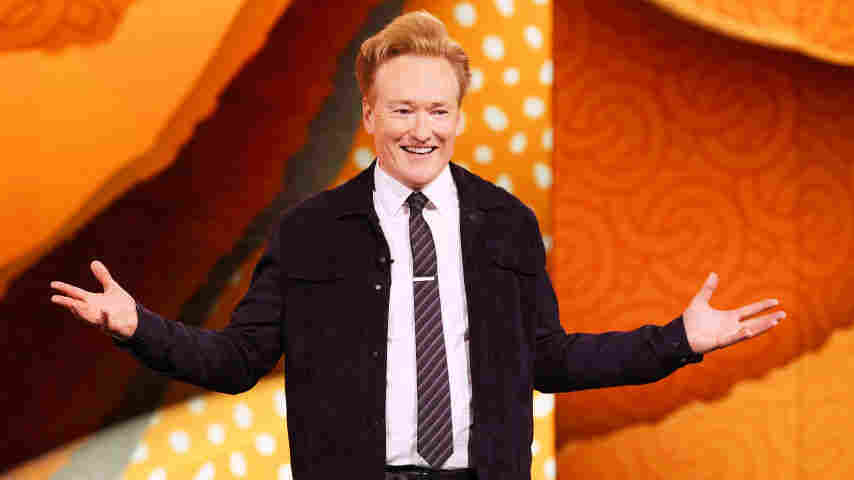 Conan O'Brien hosts the TBS talk show Conan. "I just really do love getting in front of people and making them happy, making them laugh," he says. Dimitrios Kambouris/Getty Images for Turner hide caption 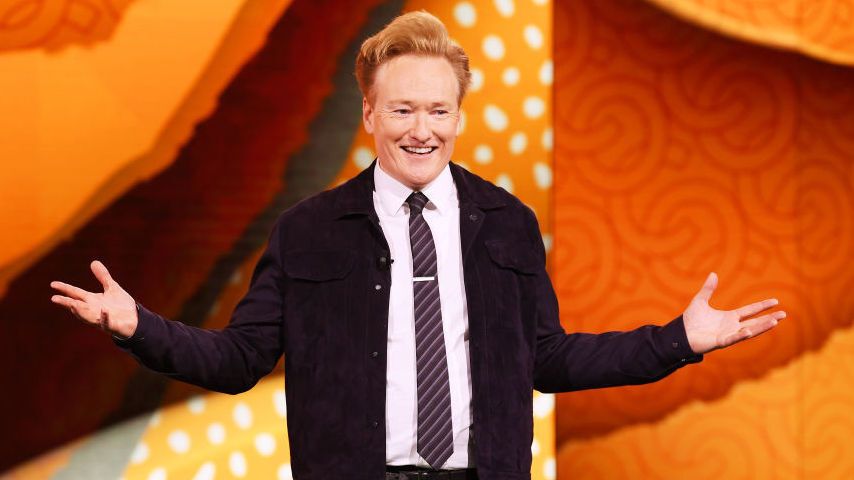 Conan O'Brien hosts the TBS talk show Conan. "I just really do love getting in front of people and making them happy, making them laugh," he says.

Conan O'Brien has been hosting late-night TV shows for 26 years — longer than anyone else currently on the air. So when a colleague suggested he start a podcast, he initially balked.

"My initial reaction was, 'Why would I do a podcast? I have a television show,'" O'Brien says. "That should be enough for anybody."

But then O'Brien thought more about the prospect, and he began to reconsider. On television, conversations with guests were constrained by TV cameras and commercial breaks; a podcast would free him to proceed more slowly and dig deeper in conversations.

O'Brien says the title of the podcast is a joke — sort of. "Sometimes when you're in the public eye, it can get murky as to who's really my friend. Who's going to come visit me in the hospital? Who's going to come over to my house when my dog dies and drink cocoa with me? Who are those people?"

He appreciates how the podcast allows him to "mind meld" with his guests. "Suddenly all these people who I know in the comedy world, and some in the political world who I've known, and we've chatted, and we've had these seven, eight, nine minute chats on television — I can sit down and we can just go down a deep, deep, deep well, and it's fascinating," he says.

On television ... it's a very presentational way of having a "conversation." And this sounds like I'm making a joke, but you need to get makeup. They put makeup on you — especially someone as translucent as I — so that you show up on television. So every day I'm in a chair and they're painting my skull so that I appear somewhat human. And then the people I'm talking to are painted. And then there's an audience there and cameras. And so I've grown accustomed to that and there's a lot that I love about it. ... But [on the podcast] I'm finding that ... I can sit down and have a really long conversation with Ben Stiller — someone who I've known since I met him at Saturday Night Live in, I think, 1990 or 1989 — I've never really had a long conversation with him.

On landing the job as host of Late Night in 1993

Say what you want about my career: Someone can like me; they can despise me; they can completely not care; or be completely neutral about me; but everyone would have to agree that it's a really unusual career. Just completely unprecedented. The way that I got onto the Late Night show was absurd. Basically, Lorne Michaels took a complete Hail Mary pass and said, "I know this writer and he has very little performing experience besides some improv, but I think he could be good."

And I went to an audition and, because I had no chance, was completely relaxed in the audition and did really well. And then NBC said, "Well, we have no other choice." I mean, that wouldn't happen today. Today if there was a major late-night spot open, there would be 600 candidates from 600 different cable shows with thousands of hours of content.

On being on the brink of cancellation during his early career

I think I was actually canceled at one point in a meeting, and then shortly after the meeting ended they said, "Well, we can't cancel him yet, because we don't have his replacement quite ready to go, so let's un-cancel him, and then cancel him at the next meeting." And then they just didn't get around to it. So I was supposed to die about six different times, and just didn't through some — I don't know what else to call it other than — dumb luck. And then I think I just got lucky and it caught on just at the right time.

It was therapeutic and satisfying. All I ever wanted to do was make people laugh. I know that sounds corny. I just really do love getting in front of people and making them happy, making them laugh. And so getting to do that on a national tour and really delighting these crowds, that was great.

Conan O'Brien Is Back On Television, After Months Of Tweeting And Touring

I think the trouble for me came after that tour because I think I emotionally crashed. ... I think it was obviously very painful to have to give up the Tonight Show. And so I avoided that pain by doing this tour where I probably burned 3,000 calories a night, would sweat through my clothes, really give everything I have, then go out and take selfies with a thousand people, then sleep for a couple of hours, but then not be able to sleep on the bus or on the plane. When that tour was over I was skeletal.

On getting help after the comedy tour ended

I had always done some therapy, but I got a lot of therapy, and I got some help with medication. That helped a lot. The smartest thing I ever did in my life was to marry my wife in 2002. It's been 17 years, and she's just a great partner, and very emotionally intelligent, and my best friend. So she helped me through this. And you have kids, too — I have two children, so that puts things in perspective. ... All of those things helped me enormously. I've since become a big advocate for people — if they're going through something and they're having a hard time — talking to somebody, and getting some professional help.

On how late-night TV has changed since he started

I launched my TV show shortly after Johnny Carson retired, so I'm still part of that era. That's the era I come into. There's hardly any late-night shows, and having a late-night show is this incredible rarity. There are very few of them. It's like you're a senator in Montana in 1880. You get to keep that job for 80 years and then get buried on your massive ranch. That's how it felt back then. And of course that all, it started slowly, and then it's just changed multiple times. And now, if you and I try to right now list all of the late-night shows that exist ... we'd be hard-pressed to name them all and would forget some because there are that many. So it's just different.

And I think when it first starts to happen, the natural reaction is, "How do I maintain my position? How do I keep what I have?" And I think once you realize the foolishness of that, and just what a waste of time it is, and ultimately unproductive, and just say, "You know what? I like a bunch of these other shows. These people are all very good." And late-night talk shows have become more specialized. ... The shows are completely different from each other, and everyone's working a certain niche, but a lot of them are really good.

Ann Marie Baldonado and Thea Chaloner produced and edited the audio of this interview. Bridget Bentz, Seth Kelley and Patrick Jarenwattananon adapted it for the Web.